This paper discusses the nature vs. nurture debate by looking at Alan Paton’s “Cry, the Beloved Country”

Psychologists often battle on the idea of “Nature vs. Nurture”, or the idea that people’s character are decided by either genetic inheritance or their surroundings. In Cry, the Beloved Country, two brothers, John and Stephen Kumalo, are shown to have distinctly different values, although they are of the same family. Alan Paton, through his juxtaposition of John Kumalo and Stephen Kumalo, provides a correlation between a person’s environment and a person’s character.

Don't use plagiarized sources. Get your custom essay on
“ “Cry, the Beloved Country” ”
Get custom paper
NEW! smart matching with writer

John Kumalo, a shopkeeper and politician, shares few characteristics in common with his brother Stephen Kumalo. John Kumalo is an inhabitant of Johannesburg and is a man accustomed to city-life. Here in Johannesburg, the city develops in John a value for money and political power.

John tells Stephen that, “Down in Ndotsheni I am nobody, …. Here in Johannesburg I am a man of some importance, of some influence.

I have my own business, and when it is good, I can make ten, twelve, pounds a week”(35), showing his concern for money and political influence over his own homeland. Msimangu describes John as having “not enough courage, for he would surely be sent to prison”(39), showing his view that while John may speak for a cause, he will not go as far as to be put in jail for it. Later, the narrator of the story says: There are some men who long for martyrdom, there are those who know that to go to prison would bring greatness to them, these are those who would go to prison not caring if it brought greatness to them or not.

But John Kumalo is not one of them.

There is no applause in prison. (185-186) This further shows John Kumalo as a selfish man, acting for his own good rather than the good of the people which he claims to represent. John Kumalo, as a result of living in the city, becomes a self-centered person more concerned about money and political power than the people and environment around him. Stephen Kumalo, a reverend, is quite different from his brother John. He is a humble man who has a great amount of love for his family and country. Stephen Kumalo, in contrast to his brother’s view that associate power with money and politics, believes that “…there is only one thing that has power completely, and that is love. Because when a man loves, he seeks no power, and therefore has power”(39). Stephen then goes on to say, “I see only one hope for our country, and that is when white men and black men, desiring neither power nor money, but desiring only the good of their country, come together to work for it”(39-40), showing concern for his fellow man, both black and white.

However, Stephen Kumalo knows that the country is dying as people are moving into the city, which attracts people with opportunities for advancement in social and economic status. As a person who does not live in the city, Stephen is able to see more valuable principles of life than money and political power, like love and peace. Stephen Kumalo is a man who is dedicated to the people and country around him. Paton further shows the effects of an environment on a person’s character by putting both John and Stephen Kumalo in similar family situations: the sons of both John and Stephen are accused of murder. John, a power monger and product of city values, has given up on his son and moved on to more important matters which involve him more than his son. He cares very little of his son’s well-being. Stephen, however, shows great concern for his son and gives his son support while in court.

Stephen demonstrates his love for his son even after his son’s death by his prayers. Stephen Kumalo displays moral and ethical values in his concern for his son, while John Kumalo displays his own values in his lack of concern for his son. John and Stephen show contrasting values throughout Cry, the Beloved Country in their views on power, concerns of the people around them, and their actions in concerning their sons. Through John and Stephen Kumalo, Alan Paton shows his view that a person’s character is based on the environment around him and not on the blood that runs through him. 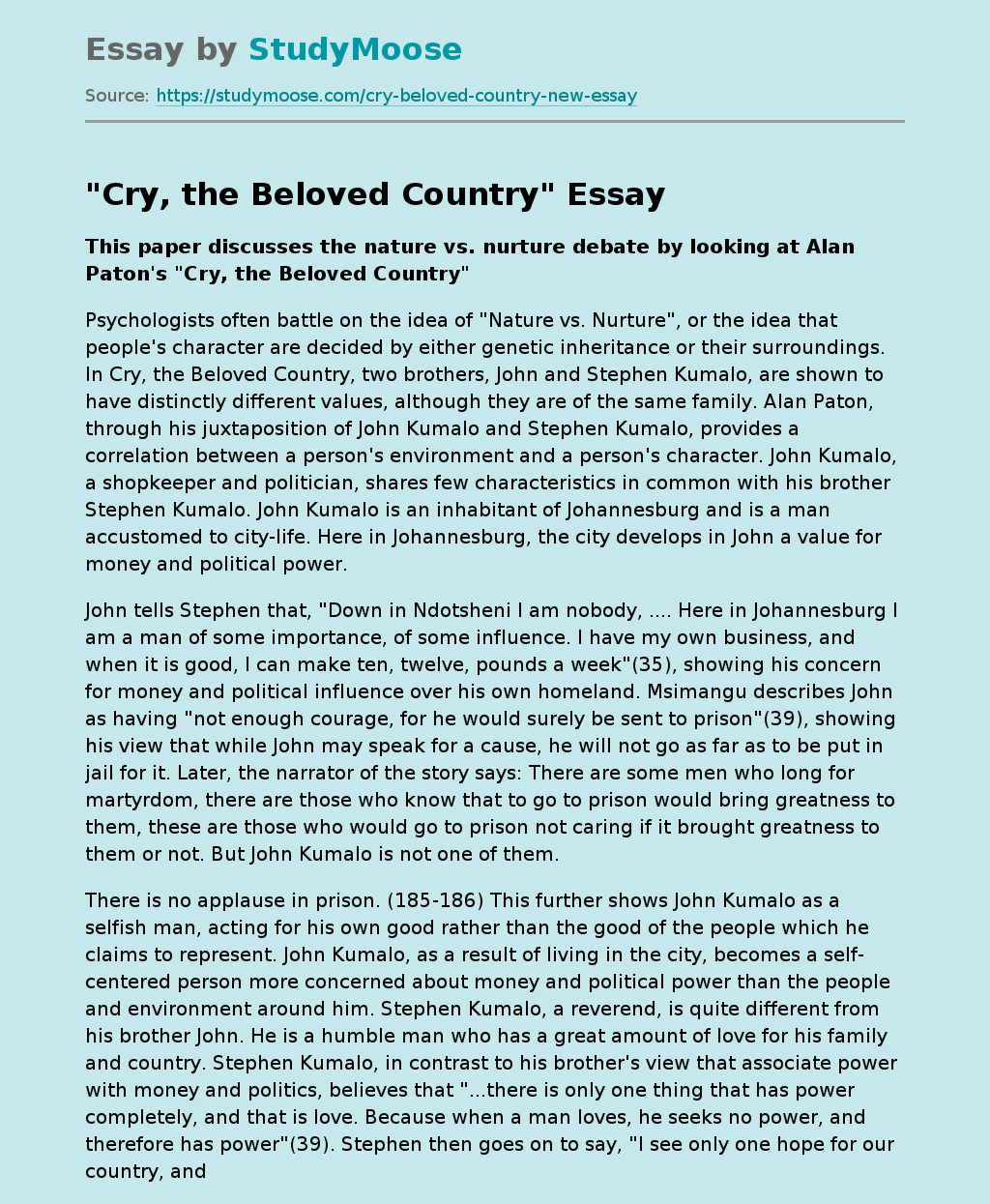