In "Cry, The Beloved Country," does Alan Paton reflect or challenge the cultural values of South Africa?

The author, Alan Paton, challenges the cultural values of South Africa to an extent in the novel “Cry, The Beloved Country.” In some occasions, Alan Paton tends to reflect rather than to challenge the current situation; this occurs when he reflects the religion of both white and black people. The author suggesting huge amounts of people moving into the city also reflects urban migration. Specific subjects scooped from the novel such as racism, poverty, and crime were topics that were challenged by the author.

Don't use plagiarized sources. Get your custom essay on
“ In “Cry, The Beloved Country,” does Alan Paton reflect or challenge the cultural values of South Africa? ”
Get custom paper
NEW! smart matching with writer

The author delicately insured that the book it self contained these subjects to establish a consecutive effect during the novel.

Religion is a major cultural value, which is vital for both white and black; therefore, the author indicates that both skin colors support the same religion despite the inequality amongst them, utilizing the reflecting technique. Although the majority of the blacks or whites are religious, the poorer people (blacks) were more pious due to the faith they had in order to become as accomplished as the whites; nonetheless, some decided that it is not necessary to evolve into an accomplished person due to the statement Mr.

Msimangu referred to: “They say he preaches of a world not made by hands, while in the streets about him men suffer and struggle and die.” Msimangu explains that blacks should not worry about their misery life since they would have a better living in the other. Alan Paton challenges this statement amplifying that religion is used as an excuse to hinder the development of the black community, creating a negative impact on black people.

Furthermore, he then decides to reflect the religion briefly clarifying that both skinned colored people maintain the same religion: Christianity. However, both kinds dislike each other and treat each other in an inappropriate way. Religion’s aim is not to devour the people, but to unite them; unfortunately this doesn’t occur, leaving the black population under pressure with difficulties of life. Part of this population cannot overcome this pressure, deciding to migrate into Johannesburg seeking for more money. Besides, although the religion is more effective in small villages in contrast to Johannesburg, urban migration might be a possible reason that has been caused due to religion.

Urban migration is another cultural value that the author, Alan Paton opts not to challenge but to reflect the environment by concisely presenting the circumstances the way it is. For instance, “all roads led to Johannesburg,” meaning that in the end everyone will end up there. Additionally, Paton uses various protagonists from the book in order to get his point across. For instance, Msimangu makes a statement in Chapter 5 after he welcomes Kumalo to Johannesburg:

The white man has broken the tribe. And it is my belief-and again I ask your pardon-that it cannot be mended again. But the house that is broken, and the man that falls apart when the house is broken, these are the tragic things. That is why children break the law, and old white people are robbed and beaten.

It is evident that Msimangu is explaining to Kumalo what he believes that has gone wrong with their country. Msimangu supports the idea that the tribal bonds have been broken, giving young men and women no reason to stay in their villages. Then he mentions that these youths then go to Johannesburg, where they simply get morally corrupted; leading into theft. Paton also designates that black people living in small villages scarcely have any employments; consequently, having another reason to flee to Johannesburg where whites are in tight control of that area because of the gold mines located there. There is also too much poverty in the villages; moving to the city for a comfortable life is a diminutive expectation. Now, from this point, racism commences since all the individuals require for money.

Alan Paton crucially challenges racism to a major extent; he presents the inequality in humanity that arises due to racism. The author strongly agrees that people must not be distinguished by their skin color but also advocates that this system is very difficult to alter; Msimangu also agrees with this fact while speaking to Kumalo:

I see only one hope for our country, and that is when white men and black men . . . desiring only the good of their country, come together to work for it . . .. I have one great fear in my heart, that one day when they are turned to loving, they will find we are turned to hating.

This quote advises that the only way to improve this nation is to unite it; however, it is inevitable to get both the white men and black men thinking the same at once – peace is never going to occur. On the other hand, an injustice of racism is very comprehendible; no one chooses to be born white or black; it is simply coincidental. Thus, categorizing individuals by their race is not a decent act. Finally, it is effortless to notice that as a consequence of racism, poverty along with crimes occurs.

The Author challenges poverty by declaring that there are thousands of black men who suffer from poverty due to the discrimination amongst individualities. The black people become poor because they are classified into white being a priority, and black being unimportant. Most blacks are peasants, which work for the white people. Moreover, the poverty within the black community is colossal; therefore, they search for other ways of earning money; for instance, crime or being a prostitute.

Alan Paton, challenges crime more than any other cultural value because crime occurs with the flow all the combinations of the earlier topics. Paton challenges it by demonstrating how the white newspapers portray crime scenes such as black native’s murdered white innocents. The author gets irritated when he sees this happen because if there had not been any racism then the money would be equally shared between the citizens and the black people would not have to rob or create crimes because it wouldn’t be necessary. Alan Paton is trying to point out that that the whites established this wall between colors and now they complain because there are too much robbery and theft going on. So it is possible to say that the whites are actually contradicting themselves by not giving sufficient money and expecting to be treated nicely in return.

In conclusion, Alan Paton challenges most of the cultural values of South Africa instead of focusing on reflecting the event. He presents most of the issues involved with the country according to his opinion; though, he does reflect and leaves the reader for them to decide whether it is good or wrong, and raises a question whether racism is inevitable.

In "Cry, The Beloved Country," does Alan Paton reflect or challenge the cultural values of South Africa?. (2020, Jun 01). Retrieved from http://studymoose.com/cry-beloved-country-alan-paton-reflect-challenge-cultural-values-south-africa-new-essay 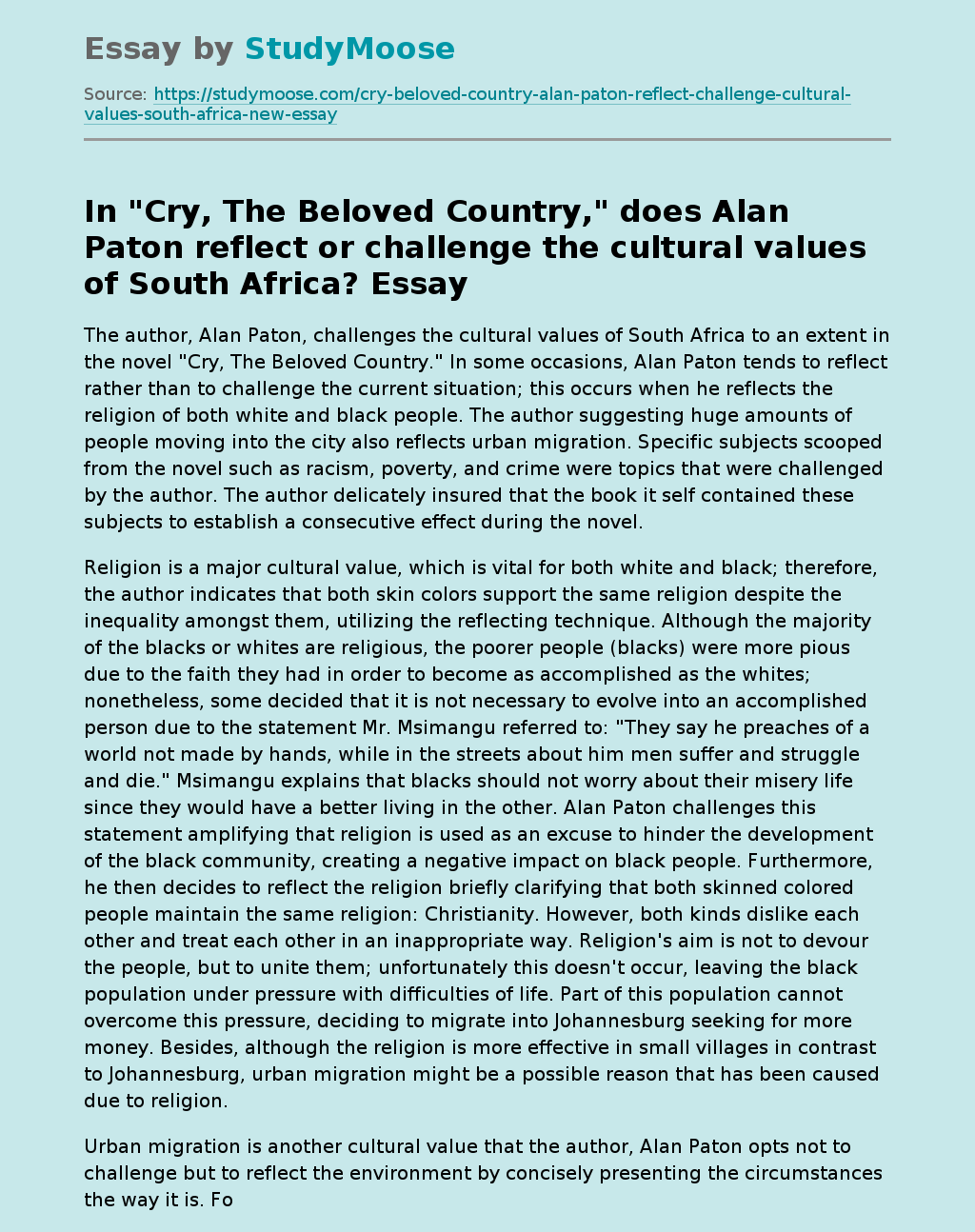