A discussion of the breakdown and rebuilding of South African society in Alan Paton’s “Cry the Beloved Country”.

“…what God has not done for South Africa man must do.” pg. 25 In the book, Cry, the Beloved Country, written by Alan Paton, some major conflicts follow the story from beginning to end. Two of these conflicts would be as follows; first, the breakdown of the ever so old and respected tribe; and second, the power of love and compassion and how that it can rebuild broken relationships.

Don't use plagiarized sources. Get your custom essay on
“ Cry the Beloved Country ”
Get custom paper
NEW! smart matching with writer

This story gives the reader the perfect perspective in learning about the injustices that have taken place in South Africa, and it gives us a sense of the trials and hardships the blacks went through then. Cry, is a story about a Zulu pastor Stephen Kumalo and how he sets out to bring his family back together. While he sets out about doing this he realizes that his family is completely in the shambles and his family has strayed from the church and tribal traditions.

Kumalo eventually learns to deal with this and while he is doing this, he makes a friend, James Jarvis, that changes the way he has looked on life. The tribal breakdown starts to show in book I, with the land that the tribe must use and how the people have used up the natural resources that used to lay there. The whites pushed them out of where they used to reside where the land is so good that it could be even referred to as “holy, being even as it came from the Creator.

” (pg. 3). In the rural areas such as this the decay comes as a result of making the blacks live in confined areas where the land is so bad it can’t be farmed any more, and the taking of the strong males out of these areas to go work in the mines were things are unsafe and people rarely return. Because of this, the people leave the tribe to go on the roads to travel to Johannesburg, because “All roads lead to Johannesburg.” (pg. 10). As Kumalo arrives in Johannesburg he finally realizes what a problem he has stepped into. He realizes that nobody in his family, neither brothers, sisters, sons and daughters, even cousins, have any moral ties with each other anymore. He sees his brother get caught up in worldly beliefs, such as: fame, money, power, greed and lying. He also sees his sister and his son living in a horrible life of crime and sin. Kumalo even starts to lose hope for his son, he states that “I can do nothing here, let us go.” (pg. 68). The cause of this degradation in the city is basically caused by a major lack of jobs for the citizens and, the laws of separation toward blacks that cause them to fight for housing and other basic necessities that whites receive all to easy. The blacks constantly “have no place to go.” (pg. 53) for housing, so this also compounds the problem. Another factor that adds to this problem is fear. This fear is in both the blacks and the whites. It unfortunately plays a major roll in most of the negative events that occur in South Africa. An example of this would be the white fear for black crime and violence, black fear for police retaliation to strikes or protests. As with Kumalo he also fears much, which almost automatically sets off other peoples fears. Kumalo is afraid to see his son in prison; Absalom fears his dad’s reaction; Gertrude fears rejection and the shame she caused; John fears the police and prison; etc., etc. “Cry, the beloved country, these things are not yet at an end.” (pg. 74). If all of this degradation were to be added up there would definitely be reason for the country to weep at its citizens problems. As a result of this breakdown there is some positive things to be gained from it, such as the rebuilding of relationships through compassion toward others. Stephen Kumalo realizes that there still is love between himself and his brother. He knows this because he shares some of the same views that his brother does. John said that the only hope that he sees is for the blacks and whites to work together in love for the good of the country. The people of Johanasburg still have some religious ties they have not yet abandoned because they still ask “God to have mercy upon us.” (pg. 58). There is also still optimism that also remains, even in Shanty Town, they dance around the fire and sing “God Save Africa.” (pg. 58). Arthur Jarvis shows great hope and inspiration to the black and white people of Africa. He is even so willing to help others that he gives up an opportunity for a successful business carrier to spread he views. He could definitely be symbolic of the Christ figure in this book. There is a change in the way that Jarvis and Kumalo see each other. Jarvis sees Kumalo as a good pastor, father and optimistic. “I understand what I did not understand. There is no anger in me.” (pg. 181). Again Kumalo sees Jarvis in a new perspective by having him a caring father, employer and someone who cares about the village of Ndotsheni. Just about everybody has a new willingness to create a better life in South Africa. Jarvis knew what needed to happen in order to have South Africa function properly, when he read Lincoln’s second inaugural address he felt an obligation to help his beloved country in a way that all South Africans should feel. “With malice toward none, with charity for all, with firmness in the right, as God gives us to see the right, let us strive on to finish the war we are in, to bind up the nation’s wounds, to care for him who shall have borne the battle and for his widow and his orphan to do all which may achieve and cherish a just and lasting peace among ourselves and with all nations.” (pg. 155) 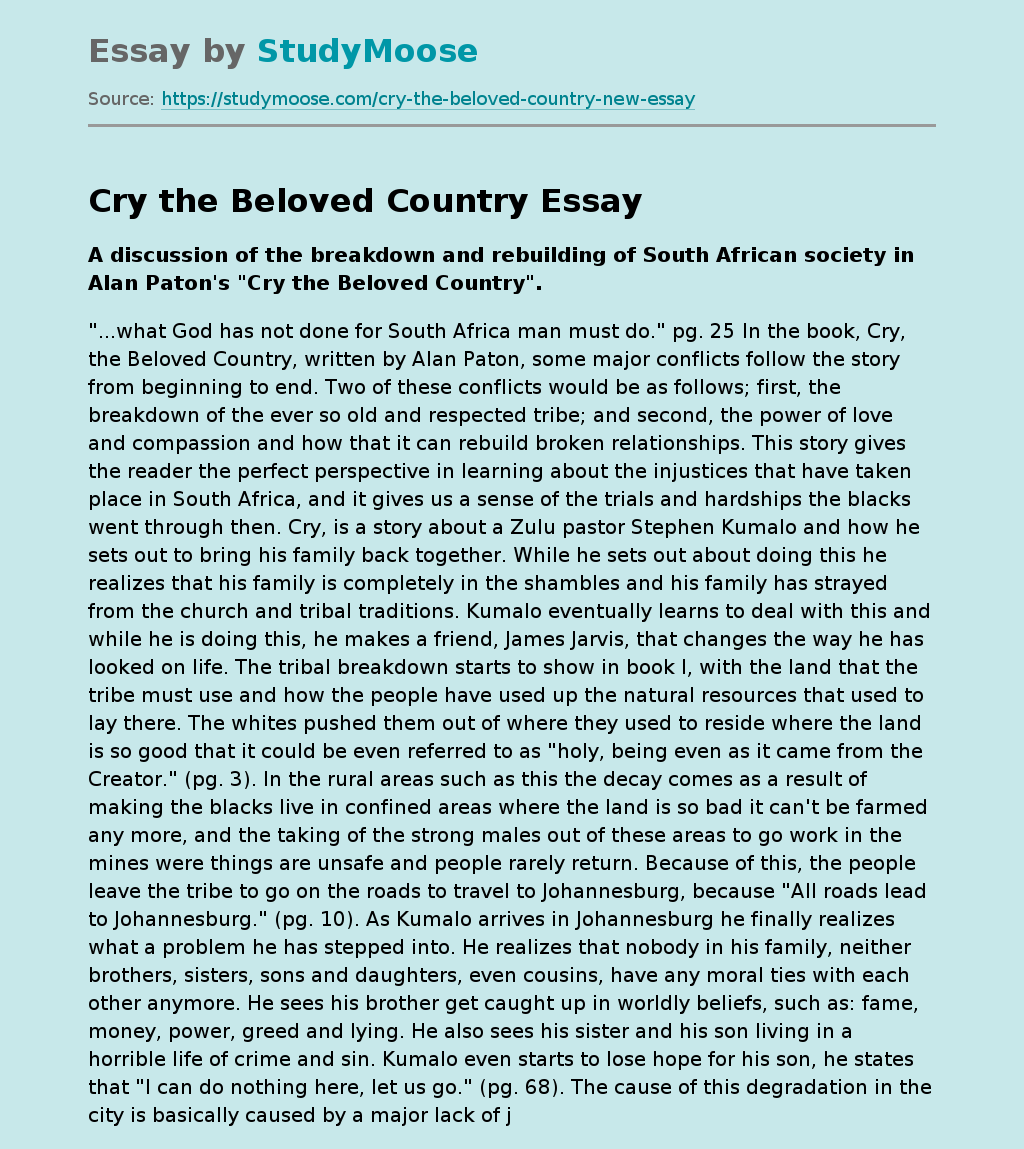