Cry, the Beloved Country Literary Analysis One of South Africa’s most prominent novels is Cry, the Beloved Country by Alan Paton. Paton’s writing style, while not primarily complicated and hard to follow, has an essence to it that makes his writing eloquent. The format in which Paton uses literary devices, symbolism, and different characterization helps reveal the main theme of the novel, that through Christian charity and with optimism of the future, whites and blacks can set aside their differences and unite as one country.

Don't use plagiarized sources. Get your custom essay on
“ An Analysis of the Literary Devices Used in Cry the Beloved Country by Alan Paton ”
Get custom paper
NEW! smart matching with writer

To begin with, literary devices play a major role in conveying Paton’s message that South Africa cannot become a unified nation without the influence of Christian charity. These include allusions, irony, anecdotes, and repetition. In the novel, there are two main allusions to the Bible. The first is when Kumalo first arrives in Johannesburg. After a native robs Kumalo of his bus money, another man juxtaposes the first by helping Kumalo travel to Sophiatown.

This alludes to the Good Samaritan story in the Bible. The random kindness shown from this “decent man” reveals to the reader that there is more than just evil in Johannesburg, and it stands as an image of all the South Africans that are acting as Good Samaritans. Also, Kumalo’s son, Absalom, is an allusion to King David’s son, Absalom, in the Bible. Stating the fate of Absalom, this Bible story parallels the novel, because of the fact that both Absalom’s were hanged. King David begs the people not to kill his son, the same way Arthur Jarvis would have done if he had not been killed, and both men defy their fathers.

The intricacy of this allusion shows how important Paton’s belief that Christianity places an important role in the book. Examples of irony, which revolves around Absalom and the idea of charity, include the fact that Kumalo is a priest.

Even though Kumalo raised Absalom solely on Christian beliefs, his son eventually chose a diverging path that differed greatly from his father’s view. Kumalo feels confused and distressed by his son’s actions, asking himself “Where had they failed? What had they done, or left undone, that their son had become a thief?” (Page 119). This separation, from both religion and his father, supports how important Christian charity is, especially for the fate of Absalom. It is ironic as well that Arthur Jarvis would want mercy for Absalom, even though he is murdered by the native. The extremity of this situation further reveals Paton’s thoughts on the charity between whites and blacks; even though Arthur is both the race that oppresses natives and is killed as a result of native crime, he demonstrates the Christian generosity completely. The accumulation of Christian charity that is shown in Johannesburg to Kumalo and others shows Paton’s optimism of how the unification of South Africa could occur sooner rather than later. Within the novel, there is an anecdote which parallels the Good Samaritan allusion, where a white woman is hurt by a white man and finds help and comfort from a native family. The irony of this situation helps support the notion that despite the wall dividing the races, there are people who are willing to break this wall down, using the kindness of goodwill. When Reverend Theophilus Msimangu tells Kumalo that he is “a selfish and sinful man” he often repeats the quote “God put his hands on me” (Page 22). Extremely humble whenever it comes to his good deeds, Msimangu repeatedly states this quote, conveying how the most generous people, are also the most modest.

Secondly, Paton uses moving metaphors and symbolism to highlight the importance of philanthropy in South Africa. A repeating idea that is symbolized within the novel, is hope. The white man from the reformatory represents hope for Absalom’s future. In the end, Absalom is not granted mercy and is hanged. Despite this, the work the reformatory man does, both to help improve Absalom and other troubled natives, makes a lasting impact in native culture. Also his work provides hope for the future of the country. Before Absalom dies, he talks to his father one last time, telling him that “if the child is a son, [Absalom) should like his name to be Peter” (Page 187). Both the name Peter and Absalom’s son symbolize optimism about the posterity of Kumalo’s family and the village of Ndotsheni. In Greek, the name Peter means “rock,” and Absalom wants his son to be the “rock” of the village and his family. This wonderful connection that Paton has created in the story conveys an optimistic feeling about what will happen when Kumalo returns home. Despite Absalom’s sentence, Paton wants the reader to be enthusiastic that things are looking up, and that if they can in the story, then it is possible in real life as well. Another recurring symbol is the sun, which sun is often referred to in metaphors as realization and enlightenment. While in Ezenzeleni, Kumalo meditates while basking in the sun, and Paton describes this metaphor:

For some hours he sat there in the sun, and whether it was the warmth of it, or the sight of the wide plain beneath stretching away to blue and distant mountains… or the divine providence of the soul that is distressed, he could not say; but there was some rising of the spirit, some lifting of the fear. (Page 118)

The metaphors and symbols that Paton skillfully adds to the novel help reveal to the reader how having optimism and hope for the future, instead of dreading what could happen, will make it easier for blacks and whites to find solace and finally connect as a nation. Finally, there are a multitude of characters, both black and white, that Paton inputs into the novel which reveal the importance of Christian generosity. Within Cry, the Beloved Country, there are three significant characters that symbolize Paton himself: Msimangu, the young white reformatory man, and Arthur Jarvis. Not only do these characters believe in the same ideals as Paton, but they all convey their opinions through selfless actions that help progress the unification of South Africa. Kumalo meets Theophilus Msimangu first, whose name in itself is an allusion to Christianity. In Greek, Theophilus translates to “God loving” or “Loved by God,” and he literally lives up to his name. As Kumalo’s guide throughout the story, Msimangu helps him grow as a person, while he himself grows as well. Despite Msimangu’s humble nature, there are many points in the book where he completes a grand action; when Kumalo and Msimangu are going separate ways, Msimangu tells his friend, “I am forsaking the world and all possessions… and I have had the permission of the Church to give this to you, my friend,” handing Kumalo all the money he owns (Page 248). This extremely charitable action by Msimangu shows the complete compassion and faith that people can have, and even though Msimangu gets no physical reward for his charity, he has no regrets, for he has never had a pleasure like this one” (Page 248). Paton’s opinion that more people should act unselfish is evident within Msimangu, because the long lasting effect of charity always outweighs the materialistic prize for being kind.

Continuing on the path of representations of Paton, the young white man, that owns the Reformatory in which Absalom went to embodies Paton’s actions, because Paton also created a Reformatory of his own, called the Diepkloof Reformatory. Paton inputs this character to reveal his beliefs of the significance of redemption and improvement. They both devoted their lives to ameliorate young natives’ lives, from crime to prosperity, despite the division of the races. Repeating the phrase “It is our work,” the young white man conveys his passion towards helping the native cause (Page 60). This man symbolizes how not all whites are against the natives, and how there are more than just natives fighting for unity. Perhaps one of the most influential characters in the novel is Arthur Jarvis, despite him being deceased for a majority of the story. The first time you hear about Arthur, he is remembered as being a “small bright boy,” by Kumalo, signifying the pure goodness that Arthur possesses (Page 65).

Everything about Arthur screams “Christian charity,” from how he devotes his entire life to helping the native cause to his thoughtfulness conveyed in his manuscript. If Arthur had a resume, it would be over five pages long, compiled with all of his accomplishments: eloquent speaker, extremely prominent in the community, advocate for native equality, head of the African Boys and Girls Club, and avid believer of social liberalism. Unlike some advocates in South Africa who just talk about the problems, Arthur went out and found a solution, always carrying out the action. His devotion towards helping the natives is evident in his manuscript that he wrote when he states “We believe in help for the underdog, but we want him to stay under” (Page 154). Here Paton indirectly inputs his opinion on how South Africans might say they care about the native cause, but in reality they are just hypocritical. In Paton’s opinion, if a majority of people act like Arthur Jarvis completely selfless and devoted then whites and blacks would have no difficulty whatsoever coming together as a nation.

In retrospect, Paton cleverly supports the recurring theme that Christian charity can help unify South Africa with many literary devices, descriptive symbolism, and different characterizations. Through all of these techniques, Paton both indirectly and directly reveals to the reader the only way Apartheid can end: Through the charitable actions of everyday people. It can only be hoped that Alan Paton has found solace in his death, knowing that his greatest opposition in life has been abolished.

An Analysis of the Literary Devices Used in Cry the Beloved Country by Alan Paton. (2021, Dec 13). Retrieved from http://studymoose.com/an-analysis-of-the-literary-devices-used-in-cry-the-beloved-country-by-alan-paton-essay 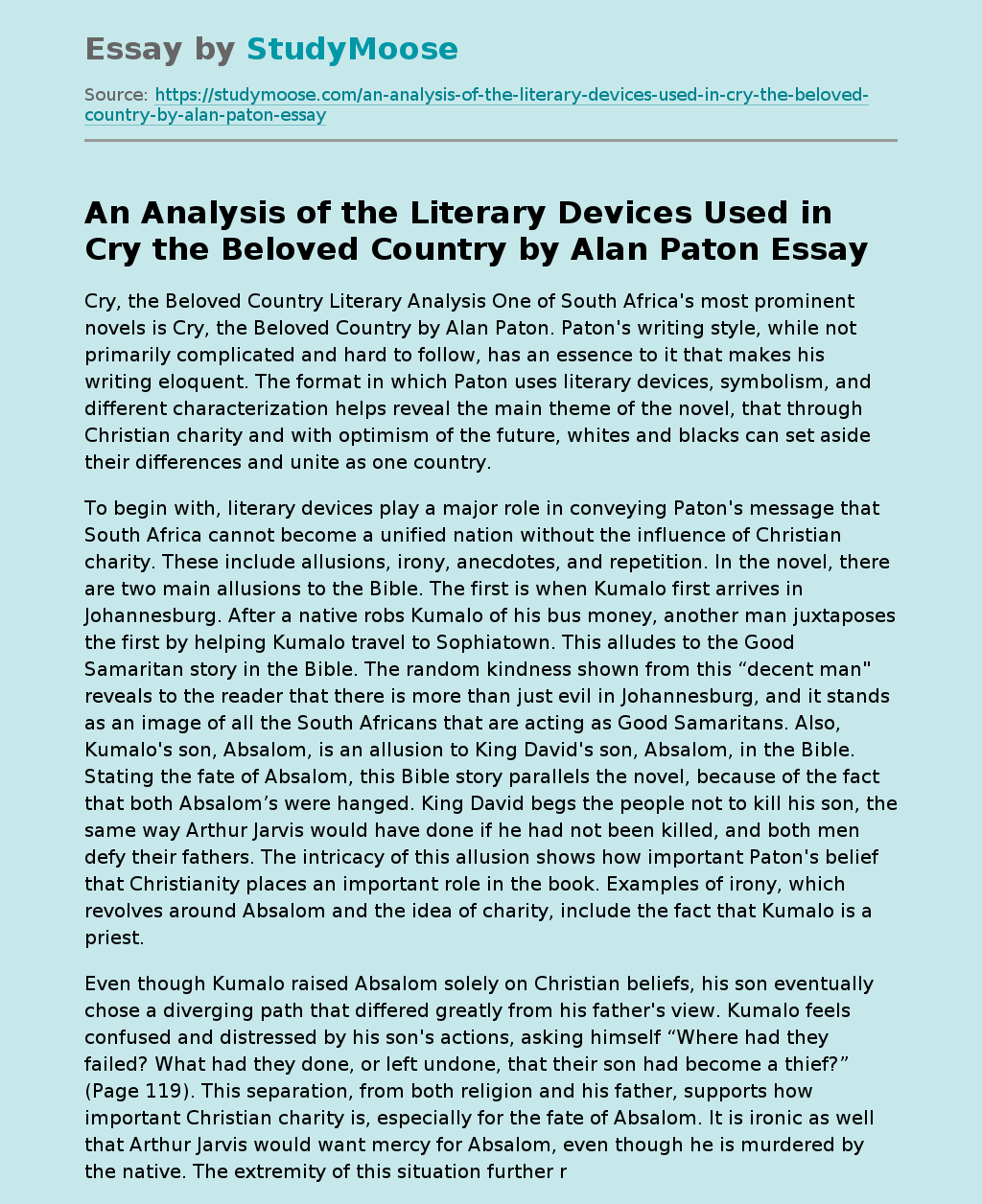