In Alan Paton’s Cry, the Beloved Country there is two protagonists, Reverend Stephen Kumalo, and James Jarvis. Both characters play significant roles to the story but James Jarvis’ situation is noteworthy and inspirational. James is an influential, dynamic character because his opinion dramatically changes upon reading his son’s manuscript. A series of events influences James to shift his mindset into the mindset of his son. An analysis on James Jarvis’ changing mindset reveals that his son’s manuscript, realizing his shortcomings, and Reverend Kumalo are all things that cause him to change drastically.

When James’ son, Arthur, dies he visits Arthur’s home and finds his incomplete manuscript. When reading his writings, James finds that his son would have risked anything to help other people, and ended up doing just that. Although James is hurt by the fact that Arthur writes about his parents in a negative way “..But of South Africa I learned nothing at all.” (207), James takes the criticism and improves from it by continuing his son’s battle.

James discovers that his son researches tremendously on the problems of their society, and was seeking help in the development of the social structure in South Africa. Arthur’s house contains hundreds of books and “…between the books there were four pictures, of Christ crucified, and Abraham Lincoln, and the white gabled house of Vergelegen, and a painting of leafless willows by a river in a wintry veld.” (176) From these pictures of Jesus, Lincoln, the gabled hose, and the leafless willow discloses the symbolism that Arthur admires.

Jesus and Lincoln were men of action; they showed love for their friends, and at the same time, their enemies. These two men suffered and died for their beliefs, the same way Arthur did. A water willow represents freedom, therefore, it can be concluded that the painting of the leafless willows represents a loss of freedom for the blacks in South Africa and how Arthur wants to gain their freedom back and help them get equal rights. When his son is shot and killed, James gets to finally know and understand him and his values. “Jarvis filled his pipe slowly, and listened to the tale of his, to this tale of a stranger” (172). James reads his sons speeches and understands his country’s segregation, relieving him of his ignorance. This comparison enables James to better understand his son and realize how concerned and devoted Arthur was for a change in humanity.

After James discovers his son’s views, James starts to realize his shortcomings, and realizes that the problems of others and not only of his own. James begins to help the minority. Since his son’s death and the acquaintance of Stephen, James donates 1000 pounds to the African boy’s club. Jarvis is not just giving the money as a gift; instead he gives the money to the club because he knew the club would improve the country’s condition. Using his son’s views again, James decides to do something about Kumalo’s village, which is falling apart. He sends milk for the children, an agricultural expert, and builds a church for Ndotsheni. James builds the church because the current church in Ndotsheni is old.

James and Stephen both live in the farming areas of South Africa, share the love for the same land, and what is in their lives. They each have a son of whom they consider a stranger but after they lose their sons, they begin to understand them. They both learn the problems in South Africa through their sons, and after realization, they both try to do something to improve the social, and racial differences which plague Johannesburg. Both men are strong but James Jarvis has to be the strongest for his ability to take his son’s death the way he does. Instead of being an irate, cruel, sorrowful man; he picks up where his son left off. It’s realistic that James can be forgiving to Stephen even though he is the father of Absalom, the boy who killed Arthur Jarvis. James Jarvis reacts this way because he doesn’t want anyone else to experience the same thing that happened to him; instead he wants to fix the problem before it occurs again.

When his son is shot and killed, James finally gets to know and understand him and his values. “Jarvis filled his pipe slowly, and listened to the tale of his son, to this tale of a stranger” (172). He reads his sons speeches and understands his country’s segregation, relieving him of his ignorance. James Jarvis was a dynamic character that changes throughout the novel. The representation shows how South African problems educated James Jarvis, and
turned him into an understanding, and influential man. If Arthur Jarvis had never been killed, James Jarvis would’ve not been educated by his son’s writings or by Stephen Kumalo. 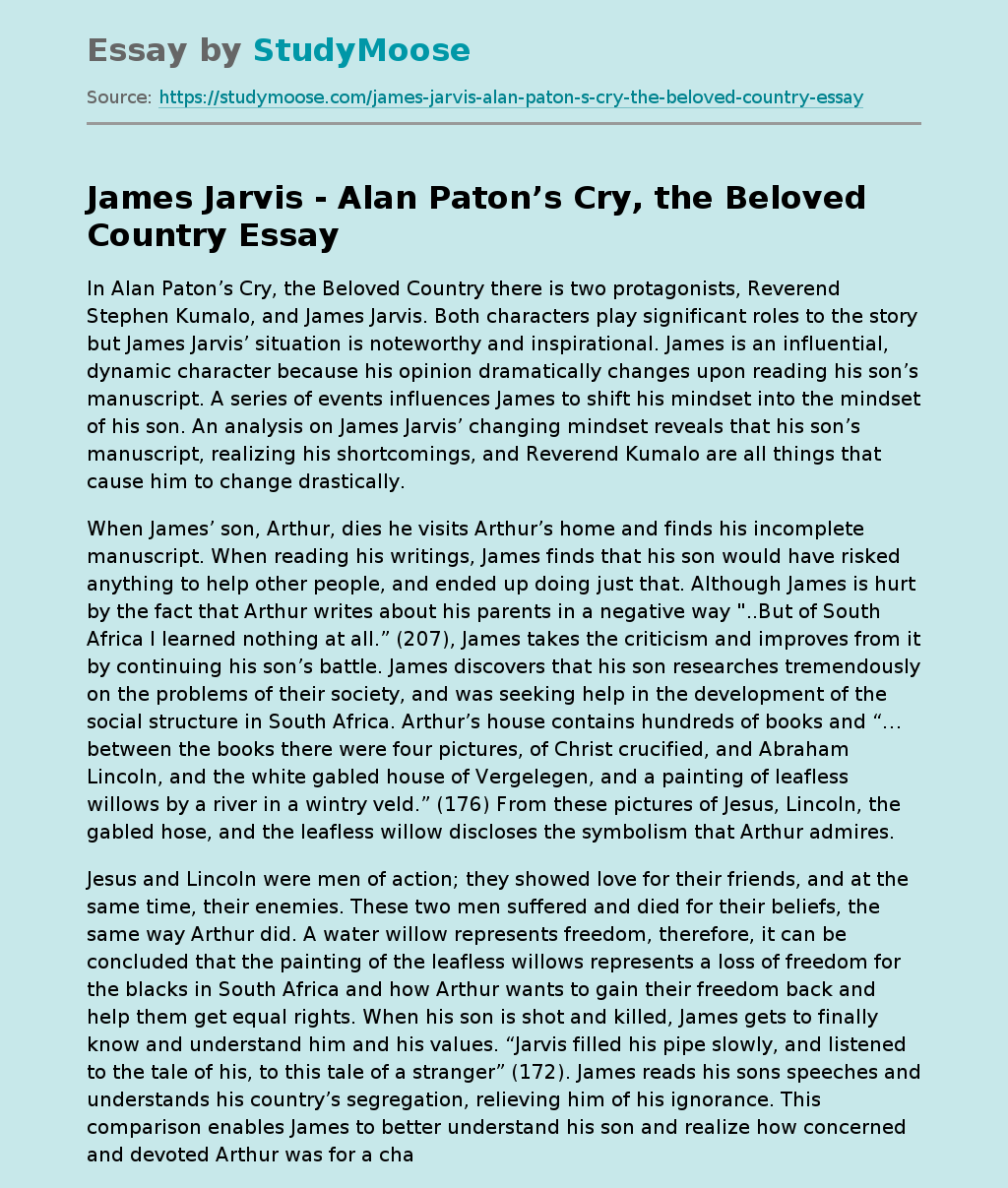