Machiavelli and Erasmus were both humanists, but had very different points of view. Machiavelli whose writing was from the Italian humanist’s view, when Erasmus wrote from the points of view of Christian humanist in Europe may be one of reasons for huge differences in Machiavelli’s and Erasmus’ thoughts. However, these two styles of humanism provided us means to “generalize about the meaning of the Renaissance.”(303).

According to Lawrence in his book Culture and Values A Survey of the Humanities, Machiavelli “sees Christianity’s role in politics as a disaster that destroys the power of the state to govern.

Turn in your highest-quality paper
Get a qualified writer to help you with
“ Niccolò Machiavelli and Desiderius Erasmus ”
Get high-quality paper
NEW! AI matching with writer

”(302). In other words, the Church interfered deeply in everything, especially in state management. A good example of this is Henry VIII, who ruled England from 1509 to 1547 and remains one of English most famous and controversial king because of his divorce from his first wife, Catherine of Aragon. Henry VIII wanted to divorce from Catherine that followed by marriage to Anne Boleyn.

But, the Church of Rome did not allow him to do what he had wanted for so long, about six years.

In 1534, Henry VIII broke with the Church of Rome over his divorce, found his own church and made himself Head of the Church of England. Clearly, Henry VIII who was a king of England, had no ability of divorcing his wife without the Church of Rome’s sanction unless he cut off all the connections from Rome. That is to say that the Church had an immense large religious influence on much of the power of a state to govern, in other words, politics.

From Machiavelli’s point of view, “the state needs to restrict the power of the Church, allowing it to exercise is office only in the spiritual realm.”(302). I strongly agree with Machiavelli that there are always so much conflicts between the politics and the church that these two powerful influences can not share power and influence.

In the Christian’s view, Erasmus “felt that learning from the past could be wedded to the Christian tradition to create an instrument for social reform.”(303). He realized the religious corruption, and piercingly taunted the barrenness of scholarship provided by the Church and excessively superstitious manners. Erasmus’s ideal which was combining religion and politics seems to be impossible at that time, even at the present.

On the other hand, Machiavelli theory does not concern about morality and is cruel. The prince, a favorite Machiavelli’s illustration, demonstrated clearly his point of view:” The prince must be as sly as the fox and as brutal as the lion.” and ” cruelty or hypocrisy is permissible; judicious cruelty consolidates power and discourages revolution.”(302). These two typically statements explains why Machiavelli’s reputation is very bad toward the Catholic Church. Nevertheless, Machiavelli’s pragmatism has a strong attraction to lots of politicians such as Napoleon and Catherine the Great of Russia.

In brief, although there are reverse attitudes between Machiavelli and Erasmus, both men’s views brought us glimpses towards the meaning of the Renaissance and the general understanding of the evolution of a culture. 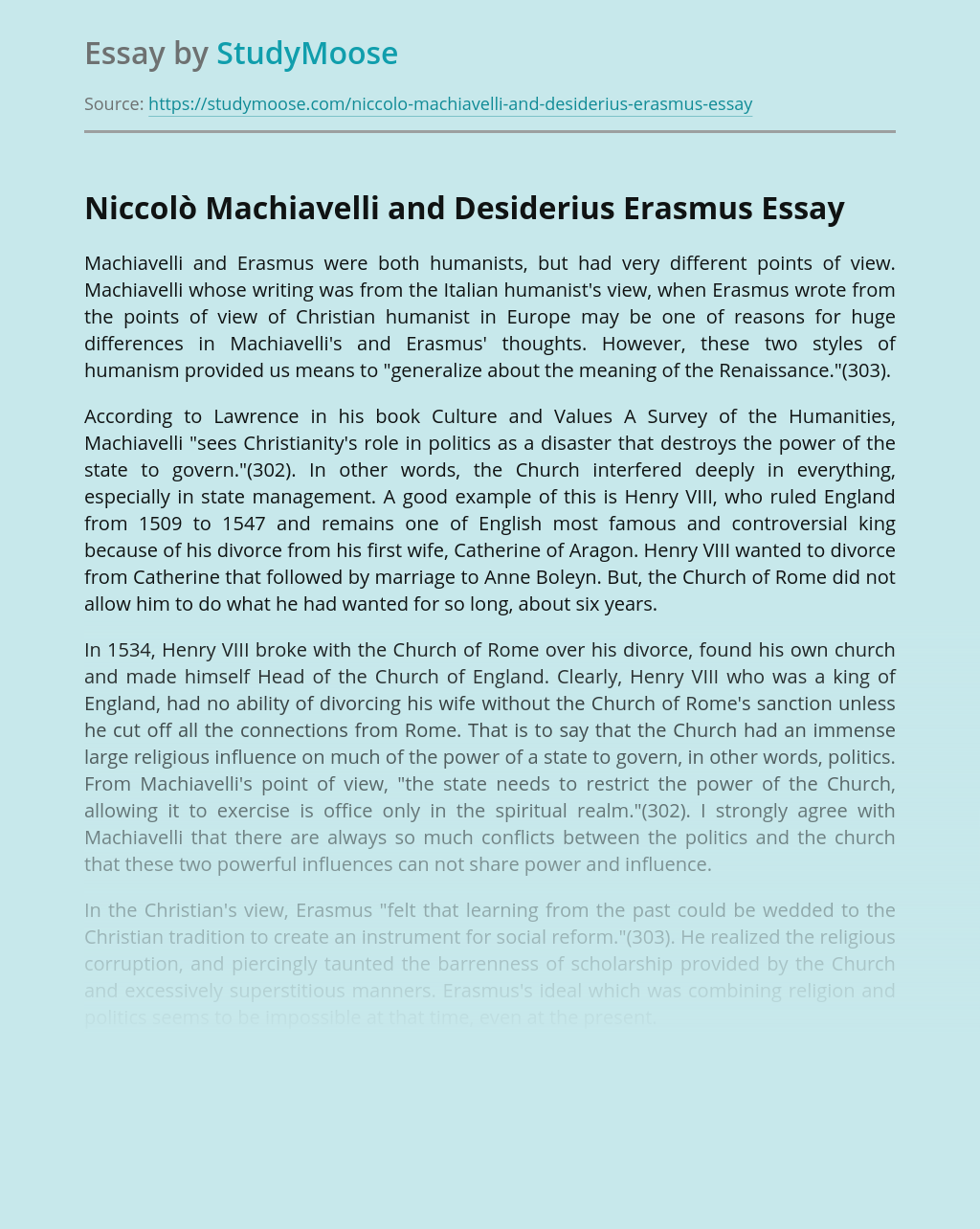 Turn in your highest-quality paper
Get a qualified writer to help you with
“ Niccolò Machiavelli and Desiderius Erasmus ”
Get high-quality paper
Helping students since 2015
Stay Safe, Stay Original