Philosophy of Machiavelli vs Erasmus

I believe that both of these views, to a certain extent and in certain situations, are still relevant today. With some people, the parts of the population that seek only to gain in their lives, and not contribute to the betterment of society, I would say that the Machiavellian approach would be of better use. Because he is right, a lot of men are ungrateful, fickle, deceptive, avoiders of dangers and eager to gain. With these kinds of people, they will try to take what they can without regard for who they crush, so the only way to keep them in check is their fear of the punishments they might receive.

Don't use plagiarized sources. Get your custom essay on
“ Philosophy of Machiavelli vs Erasmus ”
Get custom paper
NEW! smart matching with writer

We obviously don’t have to worry about them killing someone for political reasons like in the times when “The Prince” was written, but I would say that seizure of property is still a punishment used today.

That is the first thing people go for when seeking punishment or reparations; money, possessions or property.

I think love of country, not necessarily the person running it is the best way to get devotion from people. So I disagree that those people who follow out of love are less reliable. Especially right now, as a member of the armed forces, I can speak for myself a many of my comrades that we don’t agree with most, if anything, our current leader says or does. But we follow his orders anyway, because we love this country, and that is greater than any personal reason for not following our President.

If anyone even tried to use the fear approach, they would never even get elected. That is why they have propaganda and the occasional commercial telling all the good deeds they do, not saying who they punished for not agreeing with them. So maybe in a country where democracy doesn’t decide the leader, Machiavelli’s approach might be used, but in ours, I would say only for small portions of the population would it be useful.

I think Erasmus’s view would be more accepted in today’s world. We all know some politicians don’t follow a lot of the things he lists a good ruler should do. I don’t agree with him saying that taking an injury and losing a little of the “empire” might be a better choice. Not taking those injuries, and showing the world that we are a super power and won’t take things laying down is the best way to avoid hurt in the long run. But his views on what a leader should be, and how he should treat the citizens of his nation I completely agree with. The leader should put the good of the people before his own welfare. But I don’t think that war brings all the misfortunes of state, sometimes it is necessary to go to war with those who would bring those misfortunes.

I believe that liberals fall under Erasmus’s category with just a little of Machiavelli, with conservatives using some of both. Judging from the two views, I would say that the liberals follow more closely to Erasmus because of his approach to peace. Give a little pride and take a hit, avoid war at all costs. These are approaches that, in my opinion, the most recent liberal presidents we’ve had have used. While the conservatives hit right back and went to war. The war might have caused many misfortunes since then, but who knows what might have happened to us if we had done nothing? We used the fear of punishment approach, and I think it worked just fine.

So in conclusion, I think Erasmus’s view is the better approach on how to view and treat the citizens of a nation. But there are some times when Machiavelli’s approach is necessary, if not to your citizens, then to those who would abuse them.

Philosophy of Machiavelli vs Erasmus. (2016, Mar 24). Retrieved from https://studymoose.com/philosophy-of-machiavelli-vs-erasmus-essay 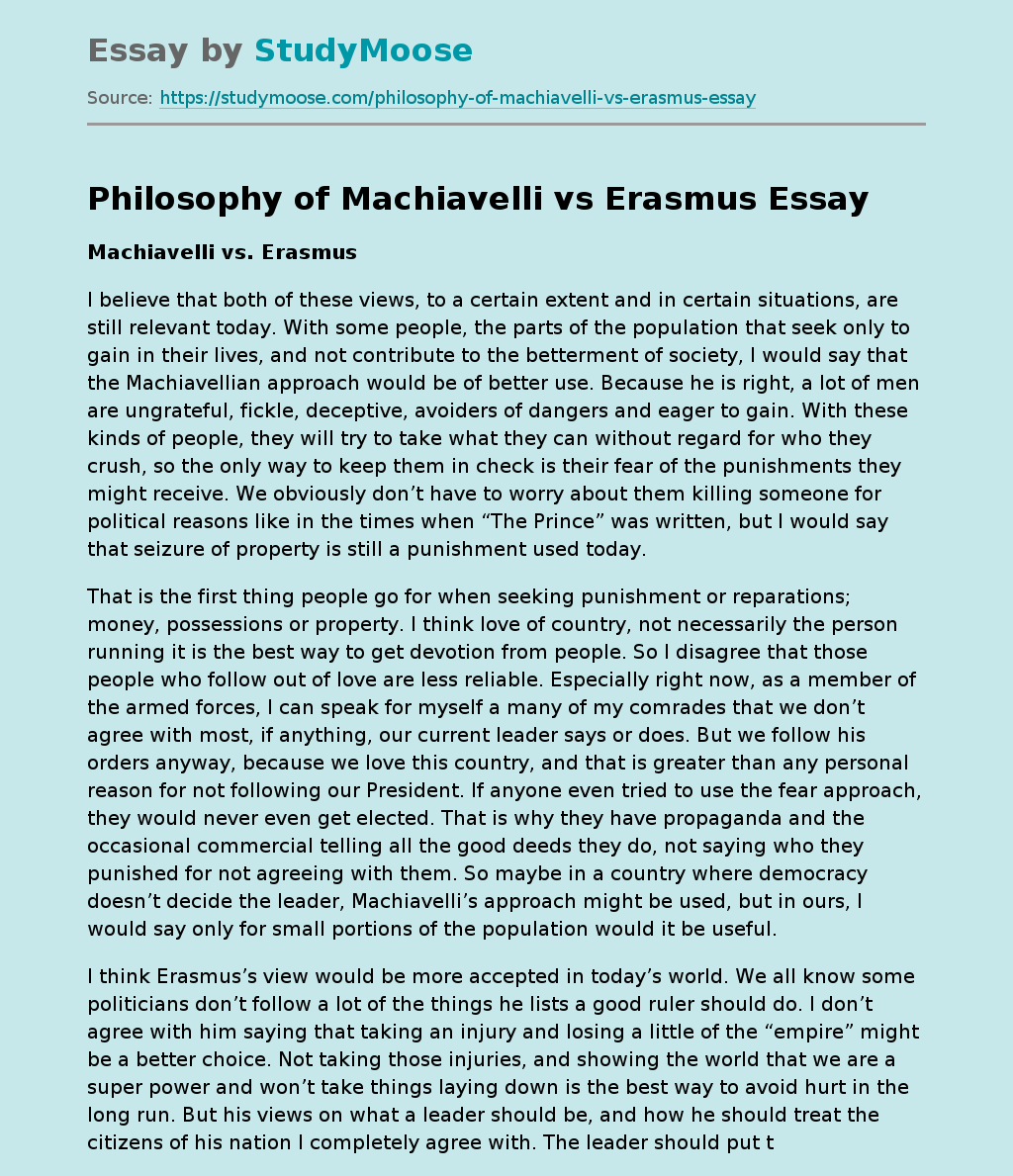