Class Inequality and Poverty as seen by Marx, Weber, and Lewis

Our society today is currently experiencing a widening of the gap between the rich and the poor. As the saying goes, “the rich is getting richer and the poor is getting poorer,” our society attests to such truth, where the wealthy is gaining more money while the poor’s case is getting worse by the minute. Poverty is a big problem ever since the dawn of man. In an ideal world, the number of resources produced could feed more than any of the hungry mouths all over the world.

Turn in your highest-quality paper
Get a qualified writer to help you with
“ Class Inequality and Poverty as seen by Marx, Weber, and Lewis ”
Get high-quality paper
NEW! AI matching with writer

But in reality, wealth is not distributed properly to every living individual. There are those who get more as compared to those who get less or get nothing at all.

If you take into consideration every living individual in a certain community, only a small fraction of its population enjoy living a well-off life, and a majority suffer from lack of resources or doesn’t have enough to fill their stomachs.

A fraction of imbalance in the distribution of resources and wealth affects a greater number of people, wherein the sad reality lies on whom are the ones getting much and who are the ones gaining a lot. This is the sad reality in our society, where people thrive in a world filled with inequality and sadly, majority of the people suffer from the extra gains of some people. Class inequality can be traced way back in the history of men, when people learned to classify themselves, making some superior and some, well, rather inferior.

Another sad reality is that the ones who are in the higher echelons of the society are the ones who are not doing actual hard labor. These people are the one’s capitalizing from the hard work of the poor working class, sweating their lungs out, literally giving their sweat and blood just to make money.

This labor force is the one who is actually earning the money; it is their effort and strength that makes the real cash, not the ones bossing them around. But the harshness of life is reflected in this situation: the ones working hard gets paid less, barely enough to make a living out of it, while the ones bossing everyone around gets a much bigger share, wherein they have exerted minimal or no real effort in doing so. This is the present situation of the working class of the past, the present, and maybe of the future.

There are some great thinkers who have pondered on these things so to speak. This people, though separated by different views, expressed their opinions about how inequalities in the classes happen and why poverty exists, depending on how they see the situation. Their take on the realities are reciprocated by approval or by rejection from the people looking at their ideas. Some may seem radical to others, but some deem that is the necessary thought for that certain specific topic. These great thinkers include Karl Marx, Max Weber and Oscar Lewis.

For Karl Marx, poverty is the outcome of the rampant class inequality that the society is suffering today. The working class, whom Karl Marx advocates, is the ones who are actually earning the money for the society. They are the ones who actually deserve to get much of the gains, rather those who are capitalizing from their labor. Marx stressed that capitalists are the ones bringing disarray in the society because they are actually contributing lesser work as compared to the laborers, yet they are getting most of the gains. In order to correct this, Marx strongly advocated the abolishing of capitalism and replaces it with communism. For him, it could be a way to alleviate poverty in the society today, rather than just letting the capitalists sit around and wait for the harvest of their money’s fruit, rather than giving the laborers the real fruits of their labors.

In Marx’ belief, capitalism has been the root of the great class divide, the widening gap between different social strata, where the poor and the rich are distinctively apart from each other. This is because of the fact that a great part of the gains goes to the pockets and the bellies of the capitalists, who are theoretically “getting even richer,” the fact that they are the ones who have the money. On the other hand, the laborers, the ones who are exerting greater effort as compared to these capitalists, are not getting anywhere the definition of rich at all, hence, they are having the difficulty to cope with the increasing cost of living, thus worsening their status, with them experiencing the “poor is getting poorer” part (Hallas, 2002).

Looking closely at Marx’ ideas, you could see that it could also be about freedom. It is being able to freely produce and receive what is rightfully yours, as for the part of the laborers, for their efforts, their hard work to be reciprocated with enough pay. It is about how the true “money-earners” – the laborers, be able to control various circumstances that could benefit them, and not the capitalists. They will be able to create a free society where their hard work will be equal to a good life for them and their families. Because of this, the society will be a better place as conceived by Marx. It will be an exploitation-free society, in the same time it will do away with oppression, racism, unemployment, war, from poverty and inequality.

Max Weber’s idea revolved on the role of an authority when it comes to the distribution and allocation of the national resources. He also stressed out that the wealth of the country, the nation’s riches, came from the bureaucratic organizations present. They are clearly the ones influencing the allocation of these resources because as Weber sees it, they were the producers, not the common working class. His main idea stated that bureaucracy, an organizational arrangement of the people themselves, is to administration as compared to machine which is for production. Weber defines bureaucracy as an institutional method wherein the rules are applied to certain specific cases, thus justifying the government’s action as being fair and really predictable (“What Is Bureaucracy?” 2004).

For Weber, poverty was not essentially a natural situation or condition. The situation of poverty could be broken, wherein the social status of the people could be alleviated from the poor to the not-so-poor, thus implying a chance for people to develop. But if you see the definition of poverty as being relative, there could still be people thriving below the poverty line. This is because of the margin of difference from the rich and the poor are also changing. But if you look closely, their way of life, their social standings, their lifestyles had been changed. Even though they are still considered to be poor, relative to the rich people, they are able to alleviate their way of life out of the slums and were able to live a normal and healthy lifestyle.

American born anthropologist Oscar Lewis created the social theory about the “culture of poverty.” This concept of social classifications justify the positioning of the poor in the society, wherein the concept explains that the poor people have a different value system. Because of this, the theory suggests that the poor are slumped in the situation of poverty because they are continually adapting from the burdens of poverty.

For Lewis, the poor became “the poor” because they were transformed by poverty. Poverty became a standard in classifying a person’s social status, thus implying that the definition of being poor is relative. It depends on how you look at it. Being poor doesn’t necessarily mean that you are not eating well, not being able to enjoy life as much as others can, etc. etc. Being poor entail being placed in the lower part of the poverty line. If there are a lot of rich people, the poverty line could be changed, thus some of the rich people may be considered as poor (Burt, 2004).

The most applicable principle in the United States of America was the contribution of Oscar Lewis. The quality of life in America is far better than other countries in the world, yet there are still some poor people. This is relative to America’s situation as compared to the situation of another country. There is a possibility that a rich person in another country, when he goes to America, he will be considered poor.

Another possibility could be that when a poor man in America goes to another country, he could be considered as rich. Lewis’ introduction of a culture of poverty could be applied in America’s situation, wherein the concept of the poor is just a creation of the concept of poverty. Creating an underclass could have resulted to the introduction of a higher class, thus there was a basis for comparison of the different classes that exist in a society. The poor existed because of the rich people’s existence and vice versa.

Class Inequality and Poverty as seen by Marx, Weber, and Lewis. (2017, Mar 15). Retrieved from https://studymoose.com/class-inequality-and-poverty-as-seen-by-marx-weber-and-lewis-essay 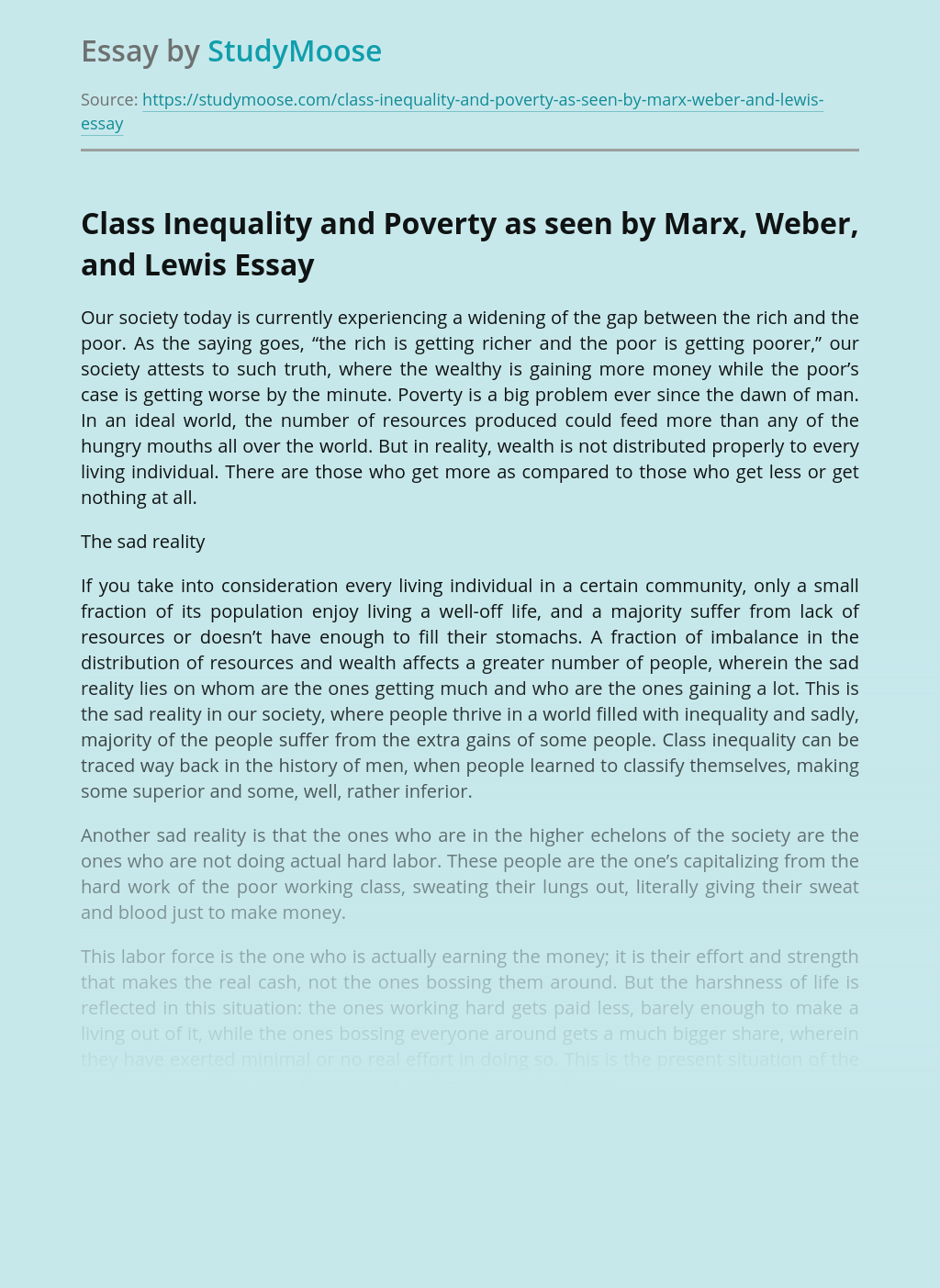 Turn in your highest-quality paper
Get a qualified writer to help you with
“ Class Inequality and Poverty as seen by Marx, Weber, and Lewis ”
Get high-quality paper
Helping students since 2015
Stay Safe, Stay Original