Century-old economic issues remain as the nation’s challenges and battle the intellectuals of the economics community primarily because traditional approaches are not delivering the outcome they have promised to give essentially in education, poverty and discrimination. These 3 aspects will be discussed closely and individually to better understand the relationship with the subject of economics and the role it plays to move forward from a long-standing struggle to improve education, alleviate poverty, and end discrimination. List and briefly explain any externalities in consumption that you think exist in K-12.

Don't use plagiarized sources. Get your custom essay on
“ “Absolute poverty” and “Relative poverty” ”
Get custom paper
NEW! smart matching with writer

The primary goal of education

Building a stronger economy is the primary goal of education since both knowledge and skill-based training establishes a robust workforce that will further the national progress. More specifically, however, a well-educated labor force is the source of national benefits such as the positive externalities of education indicated in Economics of Social Issues: “rapid economic growth, better functioning democratic processes, improved public safety and hygiene, and greater charitable giving as the average years of education increases in society.

It continued by citing that such accumulated advantages mainly stemmed from “improved economic decision making, which leads to more efficiently operating markets, and better nutritional and health care choices. ” By supporting K-12 educational system, citizens are expected to make more economic and intelligent choices that eventually enhance the standard of living.

The betterment of our individual lives due to a well-trained intellect is the cornerstone on which the educational system is built since it is believed to contribute to our personal well-being and it is a crucial factor that makes a productive workforce.

What role, if any, do you think teacher pay might play in an effective reform of K-12? Since people respond to incentives by nature, the quality of education can be attributable to teacher pay. Teachers work hand in hand with their students and how much they earn has a direct bearing on how committed they will be in educating their students.

After all, a professional fee is a component that boosts a laborer’s morale. The greater the incentive, in monetary terms, the greater the motivation there is for teachers to teach well and nurture the shapers of society’s tomorrow. What is the difference between “Absolute poverty” and “Relative poverty”? Provide examples of each. Absolute poverty differs from relative poverty due to one crucial factor: the minimum standard of income to meet basic necessities to survive.

Absolute poverty is mainly true of third world countries where the minimum standard of income goes as low as $1.25 a day like the Nike factory workers in Indonesia. This level of income is absolutely unheard of in most first world countries, like for instance in the United Kingdom where the income level varies or is relative from one household to another and where the average income level would never fall below what is the minimum standard compared to other parts of the world.

Apparently, absolute poverty has a lot more weight and importance because the lowest level of income is a life not worthy of a dignified human being. Whereas relative poverty is more acceptable since it’s the deviation from the average standard of income that’s for the most part determined by our lifestyle and our work salary which as expected is not equal and will never equal since our chosen lifestyle varies immensely to fit our level of income. Explain how a negative income tax differs from more traditional antipoverty programs.

Inequality in the distribution of income is one of the forces motivating policies focused on fighting poverty. Having mentioned the inequality of income distribution, the tussle on how much earners pay in tax persists. Traditional anti-poverty programs, like earned income tax, focus on simply reducing tax payments of the poor without consideration of the unemployed, hence, the issue on discrimination. The idea of negative income tax would have all government subsidies clumped up in one cash distribution. 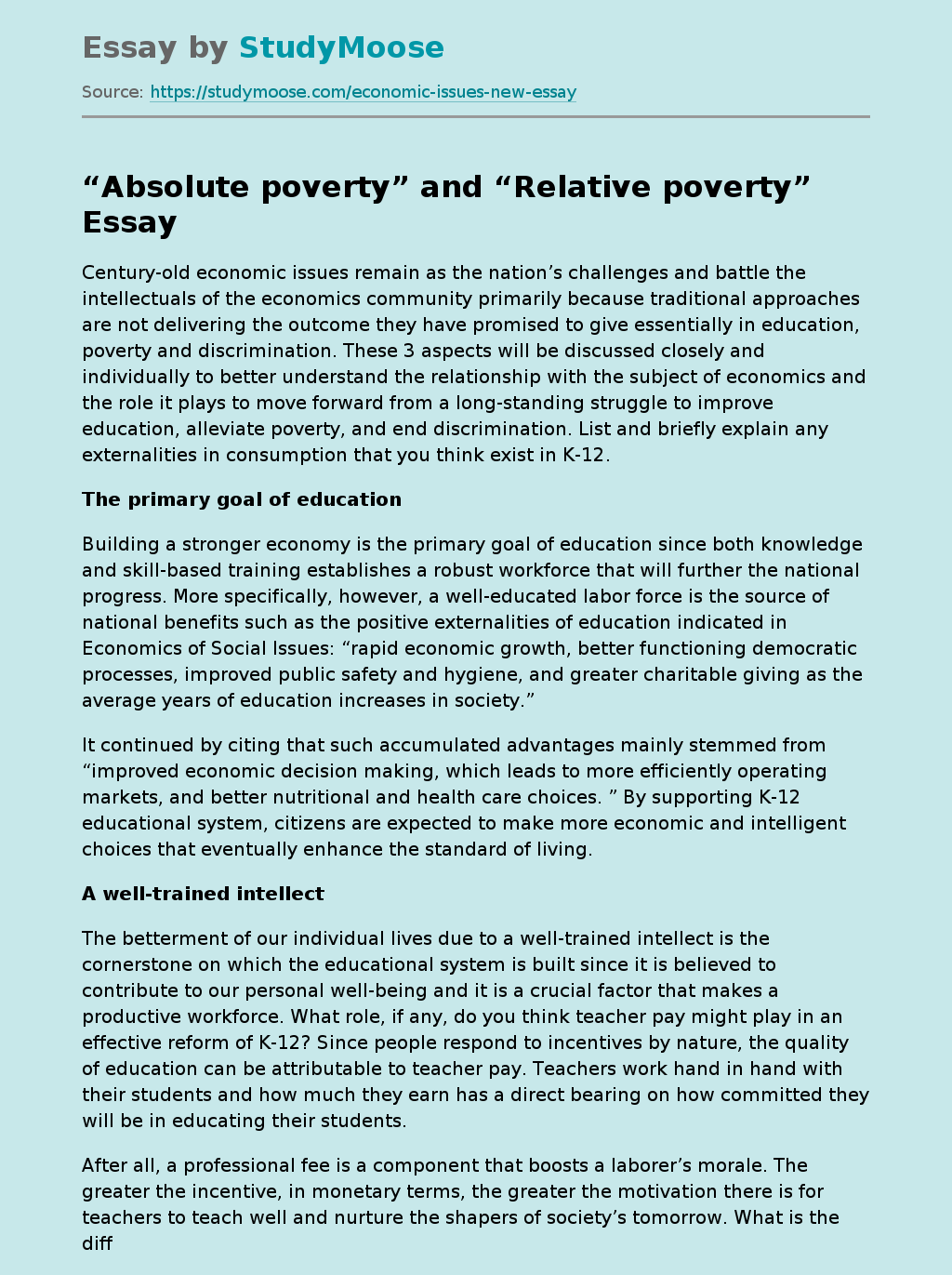