Historian Lord Actons warned that power tends to corrupt, and absolute power corrupts absolutely. This particular statement applies to individuals, institutions, and governments and is as applicable today as it was when he said it in 1887 (Aziz, 2011). The word power is often times defined as the possession of control or command over others; authority; ascendancy: power over men’s minds (Dictionary.com). Power is that to which leadership necessarily defaults in the absence of being able to contain and process meaning with others and within oneself.

Often times when individuals receive power they tend to act on their own selfish needs, and forget about those individuals that they are supposed to help.

In thinking about the quote mentioned earlier, I believe absolute power corrupts absolutely because of all the examples in history and our modern world. This can be seen in Communist countries, African states, and in South America. All communist countries have been affected by corruption in one way or another.

Famous examples include the Soviet Union, Cuba, and China. In Africa, corruption and absolute rule is widespread, in places such as Uganda and Sudan. There was also corruption due to the absolute power found in the Renaissance/Colonial times. Today, throughout the world’s developing countries, there are many examples of absolute power corrupting absolutely as there was during the Renaissance/Colonial time period.

Absolute power and corruption are common in countries with communist governments. In China, there was Mao Zedong. Mao led a revolution to create a better life for the peasants and strengthen China, but instead killed thousands of Chinese, destroyed much of his peoples’ culture, and damaged the economy (Evans, 2011).

Mao’s desire for control over people, and his acquisition of it hurt China for years to come. Likewise in Cuba, Fidel Castro is the Communist leader. Castro was born into the working-class, and was angered by the lack of social justice and all the corruption in the government. He led a revolution, which he won, and set himself up as dictator. Now Castro restricts freedom of speech and cracks down on any who oppose his rule in order to stay in power (Evans, 2004). Ultimately Fidel Castro became the very thing he despised after gaining power. Similarly in the Soviet Union, Stalin rose to power and killed and deported millions. Stalin was already an immoral person, but used his power as a means to express his corruption. Before Stalin gained power, he didn’t have the control over people that is necessary to harm them, so Stalin’s power made him even more corrupt.

In Africa, absolute power governments are found in many countries. In Uganda, Idi Amin, born into an African tribe, worked his way up through the British-controlled government and finally lead a revolution. He then proclaimed himself dictator (“president for life”). Amin committed many atrocities. He sponsored death squads to kill his enemies, he ordered the deportation of all Asians and whites, and he supported terrorist groups (Moreell, 2001). In the same way the Sudan government, which had absolute power, killed thousands, committed many human rights violations, and persecuted people base on their race or religion. Sudan was struck by civil war and atrocities (like the Darfur conflict) for decades. Absolute power gives the government the ability to do anything they want for their people, and in this case, what the government does is not for the better. Additionally in Liberia, Charles Taylor was brought to absolute power. He killed and assassinated human rights and political activists and also took part in a recent civil war. The United Nations has charged Taylor with more than 17 counts of war crimes (Evans, 2004).

There was also corruption in the Renaissance and Colonial eras. During the Renaissance, one of the greatest powers in Europe was the Catholic Church. The Church had great power over almost all Europeans, and became corrupt because of it. In ancient times, the Church cared for its followers, but as time passed and its power grew, the Church began to sell indulgences, practice nepotism, and generally became immoral (Goman, 2004). Before the French Revolution, most European monarchs were corrupt to some extent. They had everything how they wanted it, and did not care for the common people, sending them off to fight wars and slave away on farms for the monarch’s profit. All of the wealth they gained just made them want more, and act even crueler to their subjects. Their absolute power led them to exploit their people. One of the greatest rulers of France was Napoleon Bonaparte. He rose to power in the early 1800’s, overthrowing the weak French government and proclaiming himself Emperor for life. Napoleon took away many of the people’s rights after his rise to power. Napoleon also manipulated European countries against each other in forceful diplomacy, and fought many wars, simply for more land at the expense of his people (Goman, 2004). Napoleon’s absolute power made him eager for conquest and control over all Europe.

So why does power corrupt? It corrupts because it gives license to unconsciousness and neglect. It corrupts because it licenses individuals to unilaterally, unreflectively and thus arbitrarily impose their will on others. It licenses individuals to impose their will without having properly engaged and processed through the reality at hand. Power inflates the ego and through it the ego is erroneously led to believe it has the power to make people, ideas and even reality itself disappear without due process. In the big picture nothing is further from the truth. As stated before power corrupts because it gives license to unconsciousness in doing this it not only destroys the growth opportunity of the victim of such imposition, but no less the growth opportunity of the victimizer. Failure to engage another in consciousness, not only does the other individual harm, but it also does serious harm to oneself, for in both cases the precious opportunity to extend consciousness by way of self-organizing nature is altogether lost, corrupted.

In conclusion, I truly believe absolute power corrupts absolutely because of all the examples in history and our modern world. In Communist countries, Stalin, Mao, and Castro killed thousands and restricted human rights to stay in power. In Africa, leaders practiced ethnic cleansing, persecution, and committed wartime atrocities, which wouldn’t have been possible without their absolute power. In history, specifically the Renaissance and Colonial eras, absolute power’s corruption caused the Church and other European rulers to manipulate their subjects for their own wealth and profit. All in all, the corruption of absolute power has been the downfall of many countries, and has created some of the most terrible events in our history. 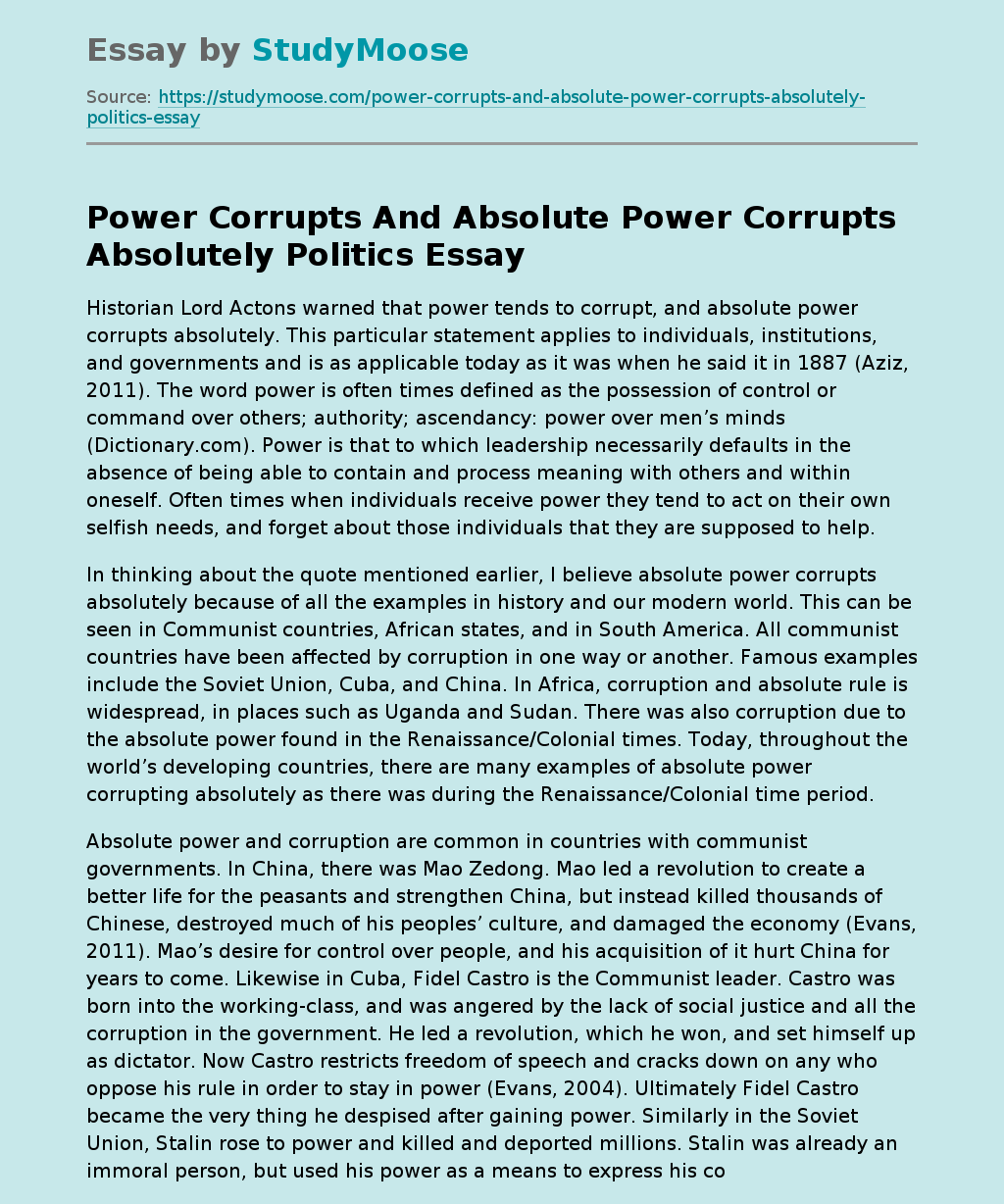