Analysis of A Poem An Absolutely Ordinary Raibow

In Les Murray’s ‘An Absolutely Ordinary Rainbow’, there is a clear unconventional portrayal of the hero, and he shows many heroic concepts as a result of the dramatic techniques used to convey the notion of the weeping man not being society’s ‘conventional perception’ of a hero.

The poems persona is simply an un-named ‘observer’ who tells the story, in a third person present tense narrative form (“they”) which assists in portraying the notion that a weeping hero actually did walk the earth and that its just not an event created in the mind, of the peoples and society’s reactions to this weeping man and the affects he has had on the people.

Don't use plagiarized sources. Get your custom essay on
“ Analysis of A Poem An Absolutely Ordinary Raibow ”
Get custom paper
NEW! smart matching with writer

The subject matter of this poem is the nature of this weeping man.

A concept of the hero this poem communicates is that a hero is strong, he possesses the heroic quality of power. Les Murray develops this notion of a hero through un-conventional heroic forms.

The first technique employed by Les Murray is listing. This technique is used to highlight the superiority and power the weeping man has over the people- heroic quality’s which come under the notion of his strength. because there is no actual description of the man’s physical superiority, his heroic strength lies in more mental aspects( uconventional heroic traight). This makes he’s quality of power even greater and more heroic because he has something which not everyone else can obtain and is thus harder to come by, he’s quality is special, unique and because of its power it is greatly feared (the strength which lies in a persons mind).

The power and strength held in the man’s mind is so great that even “The fiercest manhood, the toughest reserve, the slickest wit amongst us trembles with silence(at the man)”. This listing emphasizes that he’s strength is greater than any other that exists.

Evidence of the man’s immense mental strength is shown through listing and contrasting. The result of the sheer extent of his mental power is highlighted through him converting the once pessimistic skeptics of him, “ridiculous, says a man near me”, into “believers”. What shows the power within his mind is so great and heroic, is in the way he executes and uses he’s quality. Through unconventional methods, rather than he speaking words to the people, he’s mind is so strong that he needs only show he’s mighty emotions to get his message across “he cries out… not words but grief, not messages but sorrow”. Les Murray has contrasted the two opposites of communication, verbal(words,messages) and non verbal(grief,sorrow), ‘not’ and ‘but’, emphasize the superiority of the non verbal means. Therefore, the mans mighty power is he’s emotions, his weeping.

The second concept of the hero put forward in the poem is of normality, it defies the orthodox visions of a hero which make him out to be a supernatural being. This poem presents that a hero is human and as the name of the poem suggests he is “ordinary” on the outside, however “he’s heroic qualities lie within-George V Higgins- Studies of poetry 2nd edition”. The hero’s normality is shown in the juxstapositioning of the allusion to Christ and supernatural beings through symbols which they are renowned for “some will say a halo or force stood around him” and the short blunt statement of “there is no such thing”. The specific positioning of the dogmatic statement “there is no such thing” boldly eliminates any truths behind the hero having any of these supernatural powers of halos and forces.

Another technique used to emphasize the hero’s normality and to show that he is just an ordinary person is the use of diction and syntax in the final stanza. “He simply walks between us mopping his face….man who has wept”. The word choice of ‘simply’ indicates connotations of naturalness, plainness and commonness towards the hero, while the position of ‘simply’ adds emphasis to the meaning that he is just an ordinary man among them, and “with his writhen face and ordinary body” has done something incredible, he has wept.

Through he’s spontaneous weeping Les Murray presents a 3rd concept of the hero which is of a hero being mysterious and attention grabbing. The heroes mystery to the people is what he has to say or show, which in this case is hidden inside his weeping and furthermore the reason for his weeping.

His ability to grab peoples attentions is shown through the observers constant curiousness and apprehensiveness. This is shown through the repetition of allusions to very popular social meeting places in Sydney and curious talk of this weeping hero going round and round these places reaching the minds of so many people “the word goes round repins, the murmur goes round Lorenzinis”.

Also, the peoples immense desires to uncover the mysteriousness of the hero are shown through the metaphor where by the people are so enthralled with the weeping man that they yern and long his “tears” (his message, his reasons for weeping) “as children for a rainbow”. Through the hero’s use of his mysteriousness he achieves the heroic deed of being able to grab a sceptic peoples undivided attention, and have them in a position where he places himself in power to influence them in whatever means he wants.

Through the use of techniques, Les Murray communicates interesting concepts of this unconventional hero effectively. The weeping man’s quality’s of being able to influence others and attain their attentions through his strength in sending across messages in unconventional ways make him heroic because he is just but a simple and ordinary man. Whether or not the weeping man achieved his un mentioned purpose is irrelevant, he is still a hero because he’s purpose may of just been to cause this widespread feeling of belief among disbelievers, which he accomplished and is shown in the last line “evading (converted) believers”.

Analysis of A Poem An Absolutely Ordinary Raibow. (2016, Jun 19). Retrieved from https://studymoose.com/analysis-of-a-poem-an-absolutely-ordinary-raibow-essay 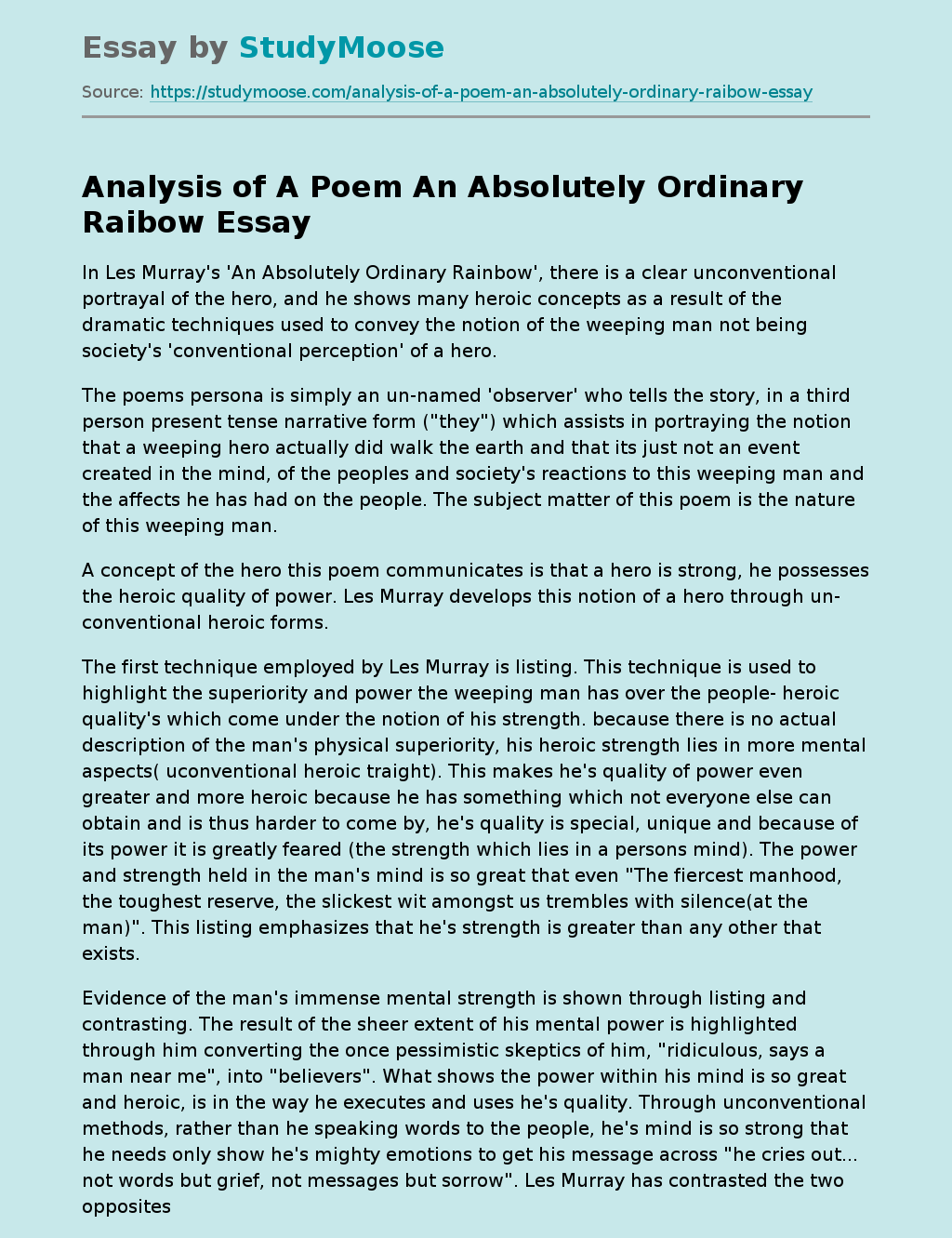