In Osoanon Nimuss’s poem, “Absolutely Nothing”, the speaker illustrates the constant progression of a child’s youthful optimism from a beaming blaze to a faded ember (“Innocence Vs. Maturity,” 2010) Most people who have read the book the Perks of Being a Wallflower may recall the poem within it entitled Absolutely Nothing by Osoanon Nimuss. The title was not given directly, but from reading the poem, one can imply that “Absolutely Nothing” is indeed its title. The poem attracts its reader’s attention because it reveals truths about life that people usually don’t admit to themselves.

Turn in your highest-quality paper
Get a qualified writer to help you with
“ Osoanon Nimuss Poem: Absolutely Nothing ”
Get high-quality paper
NEW! AI matching with writers

It may seem disturbing or eerie, but it speaks of reality, of things happening each day to not just one person. Seeing such realities around him may have influenced Nimuss in creating such a poem. The poem was relatively easy to understand, using words which are common to most people. This may be because the author wanted the speaker of the poem to come from the point of view of an average teenager.

Each stanza speaks about a particular time in the speaker’s life in which he gains maturity and loses his innocence. Due to the poem’s disturbing content that some would say would negatively influence its readers, many educators frown upon it being taught in school, fearing that students would follow the path that the speaker of the poem chose.

True that some may get the idea that suicide is a perfect solution to their problems, but it is up to the reader to judge him or herself whether after reading the poem, he or she still thinks that death is the only rational escape.

Though the poem shows a person choosing death over rationally soling his problems, it does not mean that other people would do the same. The poem may even influence some readers to see that suicide is a pathetic solution to one’s problem. Unfortunately, there is very few information that can be researched about Osoanon Nimuss that may explain his way of writing or the reason behind the creation of Absolutely Nothing. Because of this, it cannot be identified whether the poem was based on fact or fiction.

In its simplicity, the author showed his brilliance. By putting into simple words what a lot of people cannot explain, he has demonstrated his capacity as an exceptional author. Why would one want to meddle with a work that was already perfect in its own way? And the way Nimuss wrote the ending allowed the reader to see the gravity of the consequences of one’s actions, thus allowing it to leave a mark on the reader’s mind. None can be altered from this poem for even the slightest alteration would greatly affect its effect upon the reader. 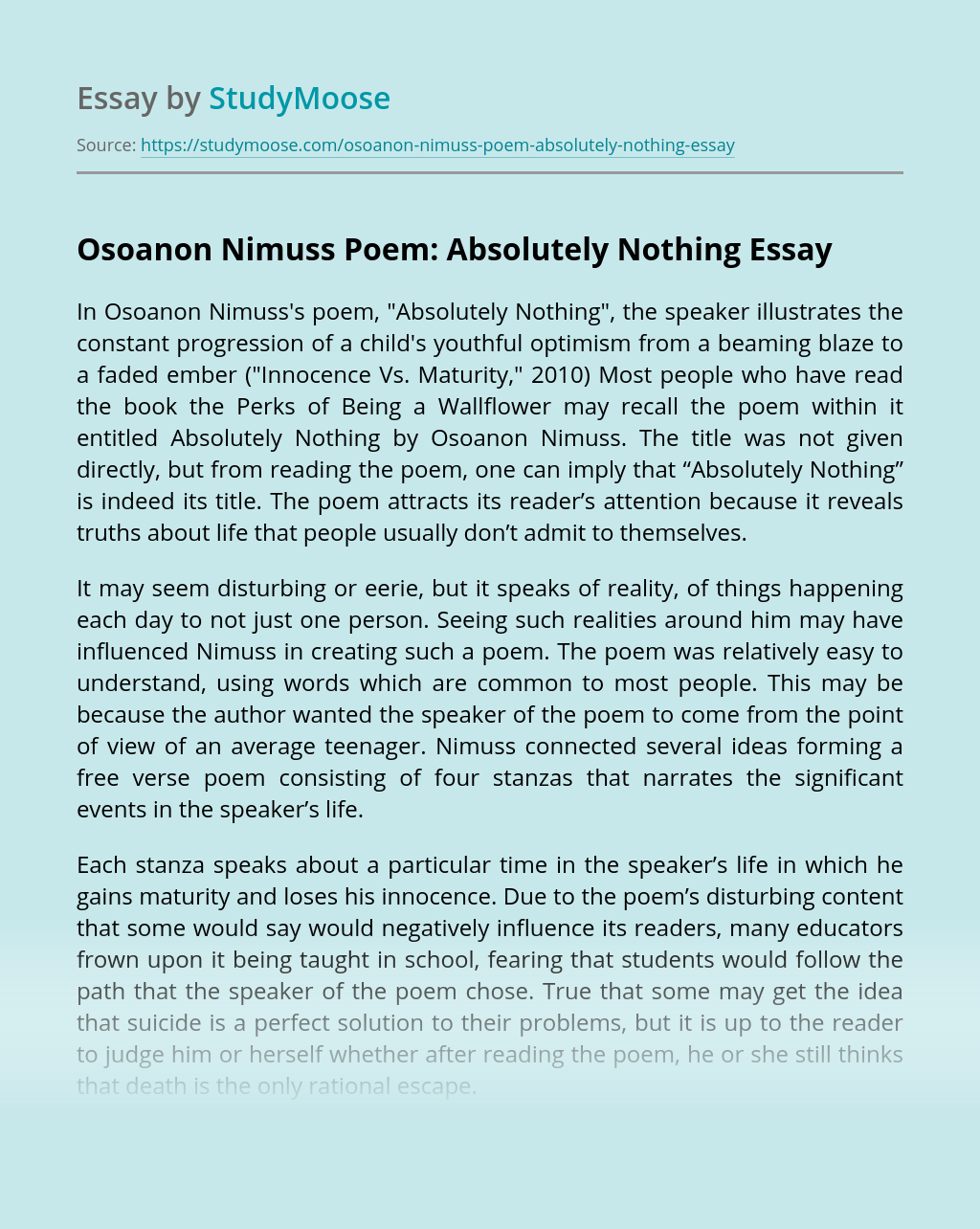 Turn in your highest-quality paper
Get a qualified writer to help you with
“ Osoanon Nimuss Poem: Absolutely Nothing ”
Get high-quality paper
Helping students since 2015
Stay Safe, Stay Original