An encounter is a short story and also a part of the collection named Dubliners written by James Joyce in 1914. Dubliners is a great literary work of the 20th Century, a real masterpiece. Because of its structure and unity of themes, it can be read as a novel. The stories are based on the author’s personal experiences in Ireland. They are stories of desperate lives lived on the margins. Dublin was, to Joyce, ‘the centre of paralysis’. An encounter describes the Irish society, the prejudices and restrictions of the century, the monotony of life, and the unability of people to change their lives.

Turn in your highest-quality paper
Get a qualified writer to help you with
“ James Joyce – An encounter ”
Get high-quality paper
NEW! AI matching with writer

In a letter to an editor, Joyce wrote: ,, I have tried to present it to the indifferent public under four of its aspects: childhood, adolescence, maturity, and public life. The stories are arranged in this order.’’

The main themes are: religion, the escape, freedom, journey, routine, isolation, paralysis and monotony. As a cultural background, people were looking for freedom, for new adventures tired of the routine of life.

This aspect can be easily observed by the readers, in the story. The everyday life of Dubliners didn’t bring joy and excitement in their lives. One of the narrator’s confessions is: ,, But when the restraining influence of the school was at a distance I began to hunger again for wild sensations, for the escape which those chronicles of disorder alone seemed to offer me’’. So, the real adventures begin where the routine ends. Routine brings not only loneliness, but also despair, sadness and frustration.

Joyce points out that routine is very dangerous, inevitable and it is seen as a trap from where you barely can get out. Joyce’s characters are looking for escape from the monotony of life, an escape that they are ashame of, but they fail and they always fall back in routine because of their inability to take actions: ,, But real adventures, I reflected, do not happen to people who remain at home: they must be sought abroad’’, says the narrator.

The narration is made at the third person to describe people, places and at first person to express the psychologically complex and the thoughts of the author. The narrator and a boy called Mahony played games with cowboys and Indians, such as Wild West, which makes me believe that they see America as an icon for freedom and happiness: ,, The adventures related in the literature of the Wild West were remote from my nature but, at least, they opened doors of escape.’’ But, even the games they used to play aren’t a symbol of full freedom since they had to hide to play the games. They decided to skip a day of school and go in an adventure at the shore where they met an encounter. I think they made this choice because they were aware of the fact that they will never take part of real adventures at home. They started a disscusion about school, books, writers and ,,young sweethearts’’. I believe there is an unexpressed desire for adventures in the life of Dubliners that never turns into something concrete. This is a proof that the narrator is looking to escape from the cotidian life, but it doesn’t happen, as he and the boy return back home. They come to the conclusion that adventures don’t bring with them protection as the society does. However, even the protection offered by the Irish society was illusional. They arent’t able to escape the routine because they didn’t have time, they never made time, they were afraid of trying and experiencing something new and because freedom always brings more responsability and unknown in your life.

Routine is a bad habit, a circle from where you can’t get out. Breaking the monotony of life is a challenge which if you aren’t able to take it until the end, it’s better not to take it at all. Also, An encounter reflects in a way the frustration of the Dubliners. The end of the story is ambiguous and interpretable. The encounter touches himself and talks about whipping. Some may think of the allusion of masturbation. I think Joyce wants to tell us through this character that even an adventurous life has its routine. The experience of the narrator with the old man is not the experience he would imagine to have. His expectations turned into disappointments. During the escape they find out that their image of freedom and their expectations weren’t what reality brought to them. Adventures aren’t only about happiness and freedom as the narrator believes, adventures also mean obstacles, fear and unknown paths. I find this story a little bit terrifying because of the character of the old man, his look and his actions. Even the discourse is very unusual and ambiguous: ,, He began to speak on the subject of chastising boys. His mind, as if magnetized again by his speech, seemed to circle slowly round and round its new centre.”. He is percepted as a man with a sick and dirty mind.

The encounter with the old man can also be seen as a meet between childhood and maturity where the purity and expectations of the young boys encounter a world less pure, safe and harmonius. It is a stage in which they face the true meanings of a matur world and begin to understand the maturity.

The language is very dynamic. There are an abundance of details. Joyce uses in descriptions stylistic devices such as: epithets (,,innocent face’’, ,, wild sensations’’, ,, real adventures’’, ,, green leaves’’), comparations ( ,, he looked like some kind of an Indian’’, ,, boys like you’’, as wearisome to me as the routine’’), repetitions (,,This page or this page’’, ,,All right! All right!’’), alliterations (,,Hardly had the day dawned’’), exclamations (,,Till tomorrow, mates!’’), enumerations (,,blue and grey and even black’’). He is very ironic even through his characters that are aware of the fact they have to escape the world they live in, to seek freedom and happiness outside the society. They are aware that their world is a trap. So, their fault remains until the end their passivity. This moments of awareness are called by Joyce ,,epiphanies’’ and are used as structural devices in the stories.

The story is like a mirror reflecting the Dublin society – a nation searching for its own identity, its darker side, its fears, but also hopes and unaccomplished desires. As Garry Leonard wrote: ,, a magic mirror converting a hard reality into a compensatory fantasy.’’

Through these short stories, the reader can notice the author’s desire to leave Dublin. He also reminds to people that they can escape the monotony of life by moving into the West and starting a new life where dreams may come true, where freedom can be manifested. Before reading Dubliners it is important to know the historical context. ,,Reading a text of Joyce’s can be compared to playing a piece of music – it can be done rapidly, skipping over opaque or repetitious passages to gain a sense of the longer-range patterns and developments, or slowly, savouring the words, puzzling over the conundrums, following up the cross-references.’’ ( Derek Attridge) 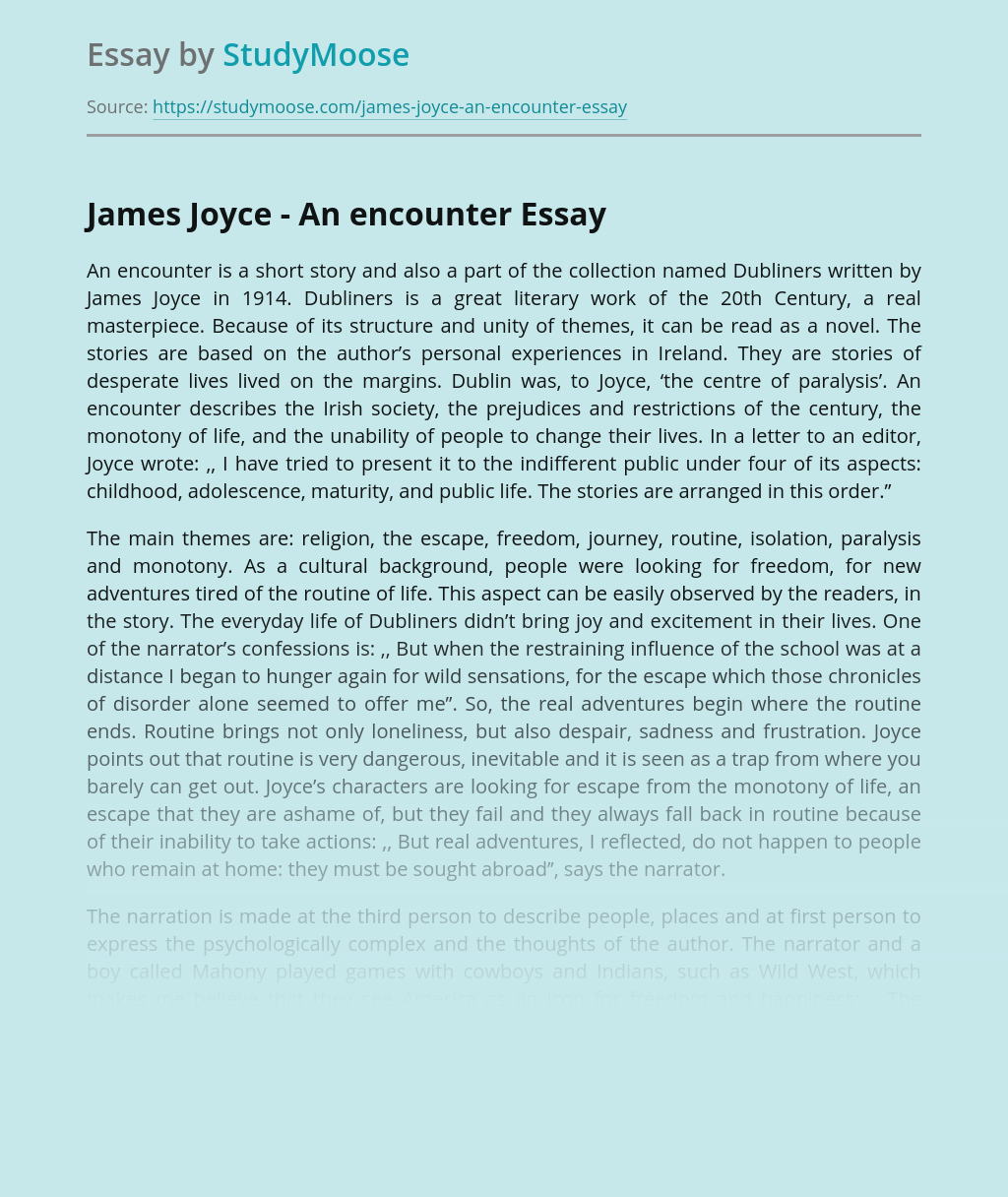 Turn in your highest-quality paper
Get a qualified writer to help you with
“ James Joyce – An encounter ”
Get high-quality paper
Helping students since 2015
Stay Safe, Stay Original