This essay discusses the concept of a classless society according to Karl Marx. The first part aims at defining a class within the context of social class. It also defines the term classlessness. The second part focuses on the possibility of attaining and sustaining a classless society in this century. The first part of the essay starts by discussing what a class is. It then goes on to briefly discuss how classes came about, outlines the different classes and what or whom they constitute and finally briefly describes the concept of classlessness.

Don't use plagiarized sources.
Get Your Custom Essay on Karl Marx Classless Society Just from $13,9/Page

The second part of the essays begins by discussing the concept of a classless society as defined by Karl Marx. This is followed by an assessment as to whether or not a classless society is attainable and sustainable in this century. Class The term class has several different definitions. It can be defined as the segment of a population that have similar social standings in society or a similar social status.

That is, a group of people in society sharing broadly similar types and levels of resources, who possess similar styles of living and, some common perception of their collective condition. Alternatively, Marxists are not concerned with the ideas of individual workers about their position in society. They hold that a person’s class is not determined by the amount of wealth that he has, but by how he acquires it, as determined by his relation to labour and to the means of production.

As defined by Lenin Vladimir I. “Classes are large groups of people differing from each other by the place they occupy in a historically determined system of social production, by their relation (in most cases fixed and formulated by law) to the means of production, by their role in the social organisation of labour, and, consequently, by the dimensions of the share of social wealth of which they dispose and their mode of acquiring it” (1965, p421). Class Struggle According to Marxist theory, there once existed a classless society which encompassed tribal society and primitive communism because everyone was poor and carried out the same type of work.

Classes emerged only at a certain stage in the development of productive forces and the division of labour. This occurred when the transition to an agricultural society created the existence of surplus of production, which was more than enough to satisfy an individual’s needs at a particular time. It is this surplus production that brought about the development of classes in society, because the surplus could be used by the higher class. That is, the ruling class which did not participate in production.

Types of Class “There are three great social groups, whose members… live on wages, profit and ground rent respectively”. Karl Marx: 1971, p. 886). These three social groups or classes are: •the proletariat or working class, •the bourgeoisie or capitalist class, •the landlord class The Landlord Class Marxist-Leninists define the landlord class as that class which owns land and derives its income from ground rent on that land. Marx considered them a marginal class, progressively losing their importance with the development of capitalist society. Thus, in a developed capitalist society, there are still three basic social classes, but these are now the bourgeoisie; the petty bourgeoisie; and the proletariat: “Every capitalist country… s basically divided into three main forces: the bourgeoisie, the petty bourgeoisie and the proletariat”. (Vladimir I. Lenin; 1964, p. 202).

The Bourgeoisie These are the owners of capital. It is this capital that they use to buy and exploit labour power and then use the surplus value from employment of this labour power to accumulate or expand their capital. Marxist-Leninists define the bourgeoisie or capitalist class as “… the class of modern capitalists, owners of the means of social production and employers of wage labour”. (Friedrich Engels: Note to: Karl Marx & Friedrich Engels: 1943; p. 04). Classlessness The term classlessness can be used to describe several different social situations occurring in society. Amongst these include; i. Societies in which classes have never developed.

These being societies in which all people are considered equal, carry out similar economic roles and have never created a division of labour. ii. Societies where classes have been deliberately or voluntarily abolished such as is the case for the Israeli kibbutzes. Class analysis explains how modern capitalist society works and accounts for many of the other issues raised by the other approaches.

But class analysis has been criticized as economically too deterministic and not able to explain changes in modern societies where people from different strata show mobility as they benefit from the dynamic organization of the capitalist economy. Another critique of class analysis is that, because of the focus on the production, it tends to ignore the fact that social stratification in society occurs along various planes and not just economic organization as. Others have identified stratification on the basis of gender, race, ethnicity as key to understanding most societies.

From the above, a classless society can be explained as one where there is no private ownership and control/rights over property. That is, a society where the basis of class division in property has been eliminated through public ownership of the means of production. By implication, all value including surplus value created by labour is consumed collectively by the community. In accordance with the above analysis of Marx’s theory on class and classless society, and the occurrences of this century, it can be concluded that a classless society is not likely to be attained, nor sustained.

This is because time and history have invalidated many of Karl Marx’s assumptions and predictions. For instance, capitalist ownership and control of production have been separated. Joint stock companies forming most of the industrial sector are now almost entirely operated by non-capital-owning managers. There is also the case of people in a society not only being employees of a company, but also owning capital, that is, shares in the company they work for. In such a situation, it is not expected that a revolution against the capitalist can take place as the worker is the capitalist.

It would not be logical for a person to overthrow himself. Workers are divided and subdivided into different skill groups. They have not grown homogenous. Thus, it is quite difficult for the proletariat to start a revolution as each worker or skill group has different goals and values. That is, workers are not united and not all may be willing to participate in the overthrow of the capitalist. In addition, class stability has been undermined by the development of a large middle class and considerable social mobility.

Instead of increasing extremes of wealth and poverty, there has been a social leveling. And finally, bourgeois political power has progressively weakened with growth in worker oriented legislation and of labor-oriented parties, and with a narrowing of the rights and privileges of capital ownership. Most important, the severest manifestation of conflict between workers and capitalist (the strike) has been institutionalized through collective bargaining legislation and the legalization of strikes. Furthermore, some of Marx’s predictions have not come to pass: Growth of capitalism.

While Marx expected capitalism to expand and he understood the adaptability of capitalism to new conditions, he appears to have expected capitalism to eventually collapse. Today, capitalism has adapted and has created new means of expanding itself – through development of new technologies, new forms of organization, colonialism and imperialism, and new markets. Technology reducing profits. Marx predicted that as industry becomes more mechanised, using more constant capital and less variable capital, the rate of profit would fall.

This is not the case in the current era as the increase and improvement in technology, has in turn brought about an increase in the quality and thus the value of goods and services. Thus, increasing profit. Increasing poverty of the working class. Marx expected the working class to become increasingly impoverished. Though there are tendencies in this direction and employers attempt to reduce wages, workers have been able to increase their wages, usually above subsistence levels in certain periods. Workers have done this through trade unions and through pressuring the state to improve working and living conditions. 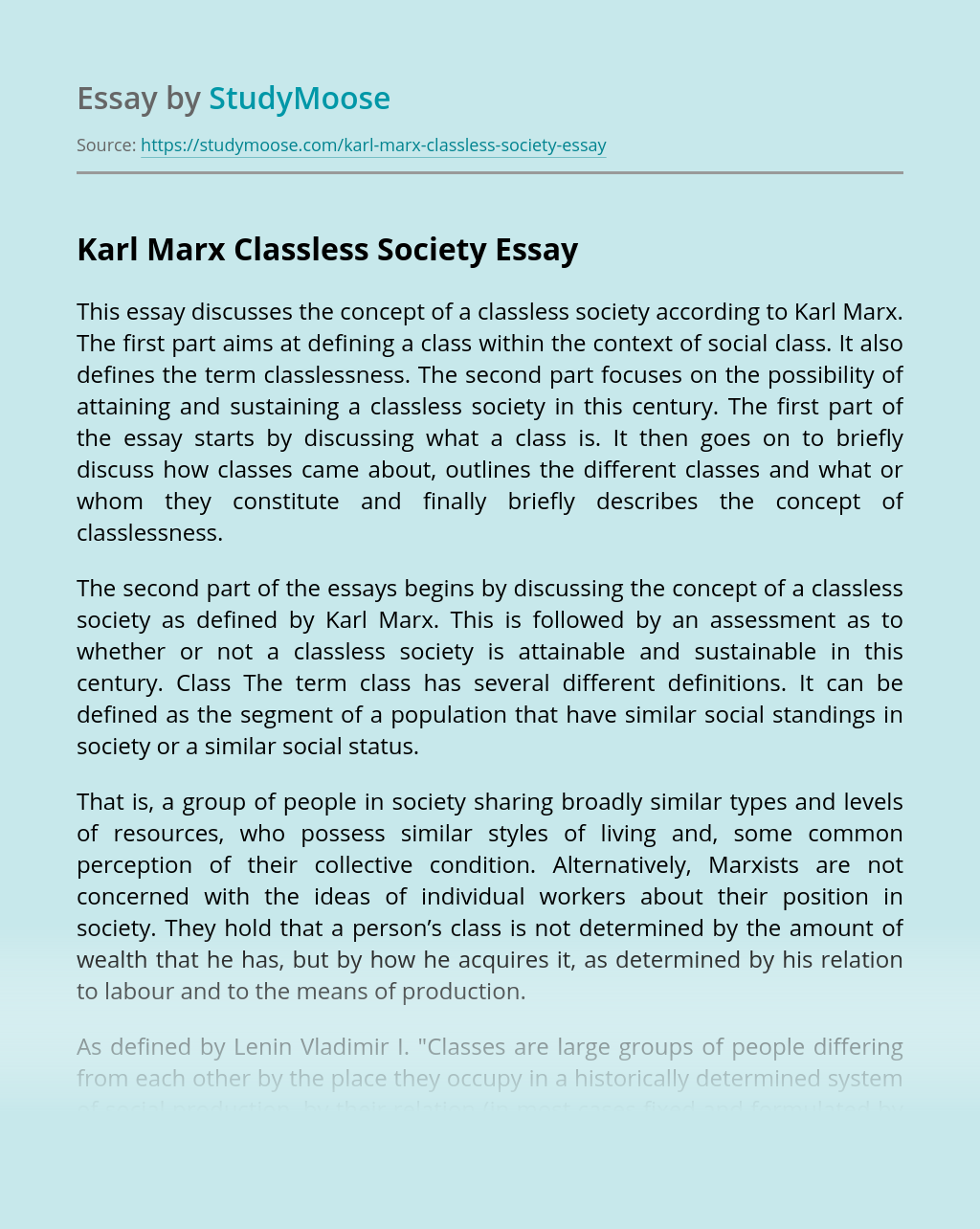 Government regulation has always been an important part of business as “regulations are essential for the proper functioning of society and the economy” (Ingram , n.d). A business is designed to generate revenue for its employees, employers and shareholders (Chindamo, Pg. 4-9, 2011). In a bid to keep increasing revenue, businesses throughout history have conducted... VIEW ESSAY

View sample
Evolutionary Medicine Encompassing the Modern World While the

Evolutionary Medicine: Encompassing the Modern World While the medical field is efficient enough already, evolutionary medicine is a more recent field, and not many know about it. The major idea is to remove any skepticism towards the field and address it with scientific data that support what the field is about. Evolutionary Medicine emphasizes in... VIEW ESSAY

Monitor and evaluate workplace learning and development| 360-degree feedback: This review mechanism consists of performance data generated from a number of sources and almost always includes those staff to whom the individual reports, their peer group, their staff and, in appropriate circumstances, their customers. This approach typically includes a self-assessment using a common process to allow... VIEW ESSAY

The above quote comes form the story of Ganymede, the kidnapped Greek youth by the god Zeus. Pedophilia and the various applications that come with it, remain today one of the most troubling human conditions in our society. It is certainly not new although still largely misunderstood. Pedophilia is also shrouded in controversy with some... VIEW ESSAY

1. Between the journal entries from September 10th and 11th, the rat has trapped the scientist by biting the rope while he was in the well, so he is either dead or alive at the bottom of the well. 2. Tayloe was fired because of poison trails leading up to Barney’s dish, and in the... VIEW ESSAY