Globalization in the 21st Century Essay

Globalization has become one of the principal symbols of economic, cultural and political life in the 21st century. Although there is no precise definition of globalization, due to the complexity of the term and the varying attitudes towards it, put simply it is the process by which nationality is becoming all the time more irrelevant. International organizations such as Coca Cola, Disney, McDonald’s, Sony, Shell Oil and IBM, symbolize such a process. In layman’s terms, globalization is basically the means by which people around the globe are now more connected to each other than ever before.

Don't use plagiarized sources.
Get Your Custom Essay on Globalization in the 21st Century Just from $13,9/Page

Information and money flow more swiftly and goods and services produced in one part of the globe are progressively more obtainable worldwide. International travel is also more frequent and international communication is routine. However globalization as we know it today is vastly different from its humble beginnings. The following essay will look at the effect global institutions have on a national level and whether they challenge or defend the interests of the nation.

Richard Peet’s reading deals with the beginning of globalization, brought on by a struggle for dominance and control of the world’s resources, through the use of coercion. Globalization was heralded by Columbus’s discovery of America in 1492. European capitalists then required labour to develop their new found continent. This came in the form of slavery, “black slavery had an economic rather than merely a racial basis – it was used because it was cheaper.”(Peet, R. pg.120) This lead to the demise of Africa’s potential for development as millions of slaves were taken from their homeland. This left a void of labour in Africa, therefore inhibiting their ability to develop their own nation. This is still prevalent in today’s society as sweatshops in underdeveloped countries with deplorable conditions are used as labour for many of the world’s global institutions such as Nike and Polo Ralph Lauren (see attached table 9.3, Klein, N. pg.528)

Wallerstein reading addresses the rise of socialism and communism as an antidote to the capitalist value of progress at any cost. He ponders whether or not “historical capitalism represents progress or regression.” (Wallerstein, I. pg.100) He believes “historical capitalism has developed an ideological framework of oppressive humiliation…which today we call sexism and racism.” (Wallerstein, I. pg.102) Globalization has led to a very small group having a monopoly over world trade. In Australia the richest 10 percent of its population “own 85% of all shares, 72% of rental investment properties and 60% of business assets.” (Kelly. S, 2001)

However, contrasting views do exist in relation to globalization, so it’s important to assess both the positive and negative impact.

Globalization has allowed for the creation of a new world politics, in which countries are not isolated units anymore. Globally the world has become united in dealing with issues such as pollution and environmental standards. Recent developments in information and communication technology allow individuals from different regions to communicate speedily across huge distances and access information rapidly. Democracy is spreading rapidly which is leading to the development of a common culture. Between 1975 and 1995 the number of democracies in the world increased from 36 to 75 states, which coincided with the globalization boom, and has lead to much closer links between nations. For less developed countries, globalization offers access to foreign capital, global export markets, and advanced technology, allowing faster growth which in turn promotes poverty reduction, democratization, and higher labour and environmental standards. (www.freetrade.org/issues/globalization.html)

In contrast opponents to globalization believe it increases inequality between nations. Such inequality is caused due to the rapid expansion of trade and economic developments without reference to human rights and labour standards. Globalization inhibits governments from subjecting worldwide economic forces to regulation and control. The uneven distribution of wealth associated with rapid globalization may be widening the gap between certain countries and regions. In order for a nation to prosper in today’s economy, they must possess the core foundation of competitiveness. Such competitiveness leads to the exploitation of poorer nations, further contributing to the uneven distribution of wealth. Global organizations increase their profit margins at the expense of the sweatshop worker whose human and civil rights are being violated. Illegal activities such as terrorism and drug trafficking have been allowed to flourish due to the free movement of goods and persons, the hallmark of globalization.

In conclusion globalization bodes both good and ill for mankind however nevertheless appears to be here to stay, whether we like or not. The challenge that lies ahead is not to try and reverse it, but to harness the positive potential whilst minimising the adverse effects. Unless this opportunity is seized, nations and global institutions will continue to struggle for domination and power. Those nations and institutions unable to compete and adapt in their current global economic climate will continue to be used by those that can. It is now up to mankind to decide wether or not the power will be cleverly used or not.

http://www.freetrade.org/issues/globalization.html, The Benefits of Globalization, accessed 04/05/03

Globalization in the 21st Century. (2016, Jun 24). Retrieved from https://studymoose.com/globalization-in-the-21st-century-essay 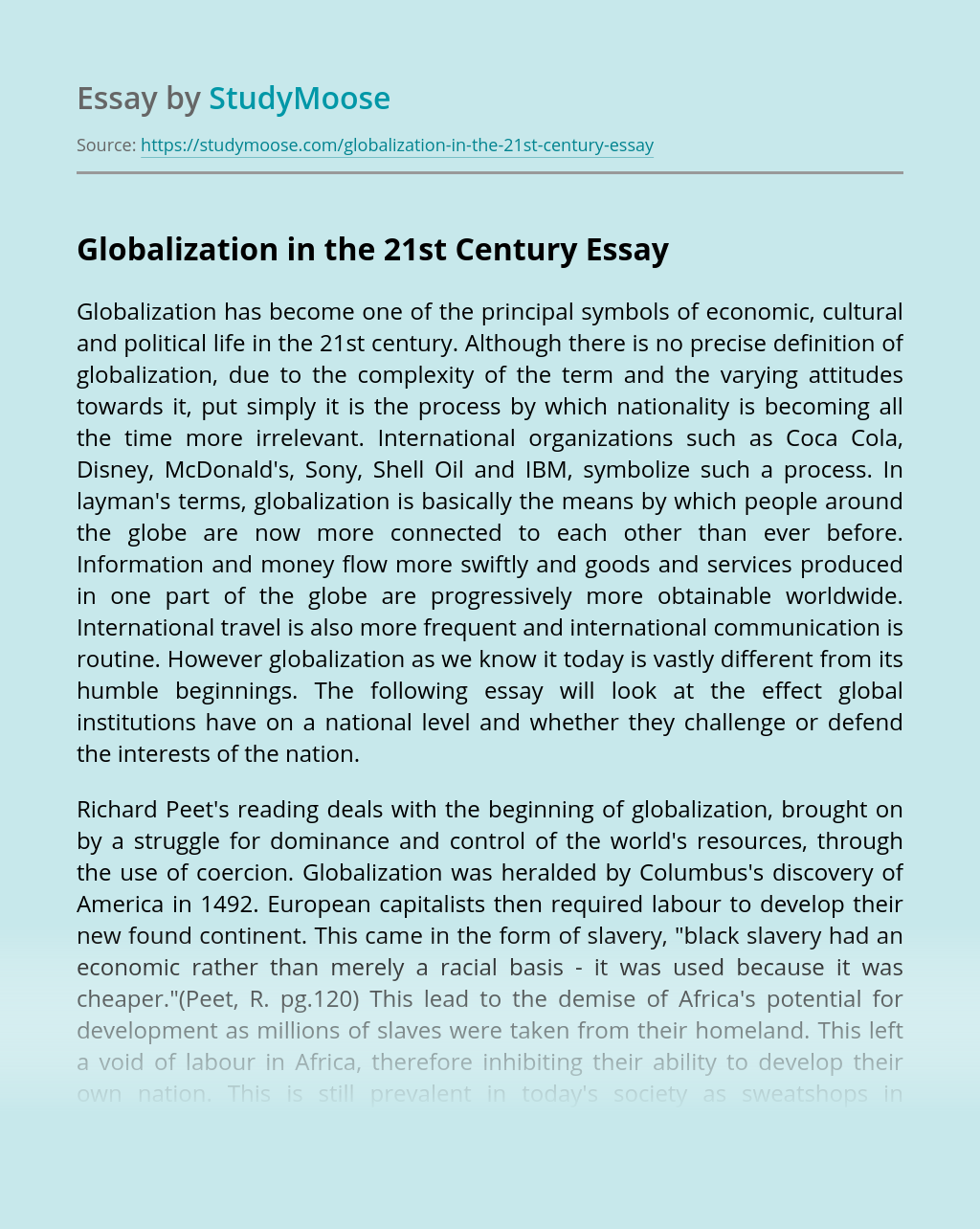 1. The story beings in medias res. In Medias Res is Latin for “it begins in the middle of things” and then has flashbacks to explain action leading up to that point. In Paradise Lost, for example, the story begins after Satan and his fellow rebellious angels have been cast from heaven, by God, into... VIEW ESSAY

Thank you for bringing in your Mercedes-Benz C300. We greatly appreciate that you chose us to tend to your vehicle concerns and we fully agree with you that vehicles of this standard should not be experiencing problems two years after the original purchase. In this regard Nelson Automotive Limited provide our customers with excellent after... VIEW ESSAY

M&S has been affected by the Brexit which made the trade with EU difficult and raise the costs. The outcome of the British EU referendum on 23 June 2016 resulted in a dip in the companys sales in its last quarter (Davey, 2016). Due to the higher cost structure, the company has also losses market... VIEW ESSAY

High school is supposed to be the best four years of your life, but for some people that’s usually never the case because of the way they dress. Everyone makes a first impressions which are mostly based on the clothes you wear to classify you as a jock, a nerd, the queen bee, and any... VIEW ESSAY

View sample
What is the Beck Anxiety Inventory

The Beck Anxiety Inventory (BAI), created by Dr. Aaron T. Beck and other colleagues, is a 21-question multiple-choice self-report inventory that is used for measuring the severity of an individual’sanxiety. The BAI consists of twenty-one questions about how the subject has been feeling in the last month, expressed as common symptoms of anxiety (such as... VIEW ESSAY