Greenpeace and the 21st century Environmentalism

In today’s expanding and growing population in local economies, various technological changes and improvements have been happening that have been an important catalyst towards development. However, corresponding to these innovations that shape human lives is a threat that critics have often attributed as a setback for development. These are societal and environmental problems deemed to be a vital cause of concern as evidence and manifestations have been appearing more rapidly. But amongst these two problems, one important facet has been affected the most: the environment.

Don't use plagiarized sources. Get your custom essay on
“ Greenpeace and the 21st century Environmentalism ”
Get custom paper
NEW! smart matching with writer

With the rising challenges that man faces with the environment, various groups have stood up and started to make a stand towards environmental degradation. An example of such organizations is Greenpeace. The organization has continually lobbied for legislation as it tries to create law-binding solutions and increased awareness with the overall aim of environmental sustainability. This, in turn, has sparked a new phase of social, political and economic concern, which was later coined ‘environmentalism.

’ With all of these, it can be argued that since its inception, Greenpeace has adopted a role towards creating environmental awareness and protection.

It has continuously been adapting towards the betterment of both global and local societies. In the end, as new issues and challenges emerge, the organization is committed towards adjusting and administering proper avenues for change. Prior to 1960’s, the drive for environmentalism has been a spurting one and occurred at a minimal level.

Boston Review argues that “until the late 1960s, much (not all) of environmental protection in the United States occurred via private law suits and judge-made common law” (p.

1). However, this aim proved to be biased and limiting as it created temporary solutions and non-accountable judicial bodies. (Boston Review) Since the creation of Greenpeace in 1971, the period has been classified to be an important era for environmentalism as recognizable and large scale changes started to take place. Various legislating bodies across America have recognized the importance maintaining and preserving the environment for future exploitation and usage.

Moreover, the system during this time was more accountable; in taking responsibility of actions and democratic in nature; by providing fair and equal provision of processes, which greatly improved the outcome of various decision making and regulation among concerned groups. Boston Review mentions that “between 1970 and the present, much (not all) of environmental protection has occurred via a remarkably ambitious, complex, and cumbersome system of national regulation” (p. 1). Defining Environmentalism

Before dwelling further on the contributions of Greenpeace towards local and international societies, one must look at the focal and foundation of the organization’s endeavors – environmentalism. To fully grasp such concept one must be able to define the parameters and evolution of environmentalism and link it towards how Greenpeace operates. Looking at the concept, one can define environmentalism to be the goal towards preservation of the natural environment. However, since its conception, the term has reached out in various fields and areas that made the term dynamic and continuously evolving.

Tao of Prosperity points out that “in defining environmentalism, we must recognize that it is not a monolithic movement” (p. 1). With all of these, it can be argued that the term environmentalism takes a holistic approach and embraces various dimensions and norms in society and therefore creating a balanced approach. Bidinotto stipulates that environmentalism thought is “the view that everything in nature exists in a perfectly harmonious balance–a balance ever threatened by the activities of Man” (p.

1) This means that the environmental movement has been moving towards the creation of better practices on the basis of experiences learned in the process of harmonizing and interaction with society. It is in here that they form their own respective views and points out what needs to be done. The Strands of Environmentalism Since its initial creation, the term environmentalism has evolved into various forms and various strands of the movements have been seen in the years. Though these groups vary in their thoughts, their contribution and mindset remains to be united and aimed towards one goal but various alternatives of practice.

Also, the promoters of this strand seek to have a positive relationship with the conventional ideologies. Environmental Support points out that environmentalism should not be approached “as a separate ideology but as something that needs greater importance within political schools of thought like conservatism, socialism, and liberalism” (p. 1) The last strand involves a new approach towards environmentalism. The Bright Greens, which was coined in 2003, seeks to promote a new outlook of the concept towards the future.

(Environmental Support) Seeing the current developments in today’s society, the group seeks to exhaust the positive effects of technological innovations and apply it to the environment. Environmental Support mentions that the process can be achieved by using “new technology, improved and modified designs of products, plus eco-communities and sustainable lifestyles” (p. 1). Furthermore, the supporters of this claim argues that by using alternative measures backed up by technology such as renewable energy, biotechnology and nanotechnologies, environmentalism is achieved.

In the end, the group favors advancement and progress but with responsibility and taking into consideration the environment. Looking at this, there is a “need to adopt open-source models of information exchange, so ideas and innovation can grow and be shared and develop as fast as possible” (Tao of Prosperity). This means that environmentalist must continuously open communication lines so as better sharing of information necessary for change can be possible. Linking Greenpeace and the strands Environmentalism

After pointing out the relevant hues of environmentalism, it is better to point where Greenpeace can be associated with. The formation of Greenpeace is a reaction towards the clamor for environmental protection and security. Moreover, it is an activism in its organizational form; a grouping of individuals who fight for one common goal. Looking at the facets of each strand, the organization can be associated with the Light Green Environmentalism. Greenpeace creates avenues of cooperation among various organizations and governments to create a consensus towards creating better outcomes for the environment.

Environmental Support mentions that the “groups belonging to this category are Greenpeace, Sierra Club, and Friends of the Earth” (p. 1) However, Greenpeace has gradually been diversifying and adopting a different environmentalist approach (Bright Green) while retaining important and valuable objectives of environmentalism. Take for example, the case of the regional office of Greenpeace in USA. Many scholars attribute their current programs and schemes aimed at the balance of the three hues of environmentalism. Shaiko argues that “Greenpeace U. S. A.

exhibits characteristics of both and new social movements and is thus classified as an organizational hybrid” (88). Quoting Eyerman and Jamison, both argued that: “Greenpeace is environmentalist because behind its non-ideological ‘profile’ lies a continuation of the basics of environmental cosmology: that modern societies have reached the limits of growth, that the consumption of resources has reached dangerous and crisis proportions and that there is a need for fundamental social change if society is to survive” (114) II. Tracing the roots: Greenpeace

The beginnings of Greenpeace began during the time when there was a renowned interest in testing nuclear weapons. The story of the organization begins in 1971 when activists sailed towards a destination where nuclear testing was taking place – Amchitka. Greenpeace International mentions that “Amchitka was the last refuge for 3000 endangered sea otters, and home to bald eagles, peregrine falcons and other wildlife” (p. 1) Greenpeace International mentions that “in 1971, motivated by their vision of a green and peaceful world, a small team of activists set sail from Vancouver, Canada, in an old fishing boat.

These activists, the founders of Greenpeace, believed a few individuals could make a difference” (p. 1) Looking at it, the relevance of Amchitka was indeed important in the point of activists. This is because the event proved to be a catalyst towards the creation of the organization and a plight to stop nuclear testing at a far greater level. Though the nuclear testing took place on the same year and the team of Dorothy and Irving Stowe, Marie and Jim Bohlen, Ben and Dorothy Metcalfe, and Bob Hunter were prevented from arriving in the island; it raised international clamors seeking its protection.

After such, an international organization; Greenpeace, was founded and recruited millions of followers. The Rainbow Warrior One important aspect of Greenpeace’s history is its prized ship – the Rainbow Warrior. According to Greenpeace International “it was renamed ‘Rainbow Warrior’ after the Warriors in a North American Cree Indian prophecy: ‘When the world is sick and dying, the people will rise up like Warriors of the Rainbow” (p. 1). It is a symbol of the first collaborative effort by members towards one particular objective.

Also, it is a significant symbol towards the organizations commitment towards worldwide consensus to protect and save the environment. Their first efforts were to sail towards Iceland and advocate the abolishment of commercial whaling. (Greenpeace International) After that, the Rainbow Warrior has been associated as an instrument for environmentalism. Though it was bombed in 1985 allegedly by the French Government due to its contributions towards pressuring the state against nuclear testing, the spirit that it carried was always part of the organization.

(Greenpeace International) Currently, the new Rainbow Warrior is a manifestation of old traditions of the organization and a mixture of new environmental friendly technological developments – a symbol of Greenpeace’ past and present. Greenpeace International mentions that “it is also a showcase of environmentally friendly technologies including solar panels for hot water, a specially designed fuel-saving wind/motor propulsion system, and a recycling system for engine heat” (p. 1) Core Values and Structure

For any organization to function according to their objectives and goals, one must have a firm foundation of structure and core values. With regards to Greenpeace, their foundation and values are structured heavily on environmental protection and democracy. Greenpeace International mentions that “in developing our campaign strategies and policies we take great care to reflect our fundamental respect for democratic principles and to seek solutions that will promote global social equity” (p. 1)

Looking closely, the core values of the organization revolve on the following: “(1) ‘bear witness’ to environmental destruction in a peaceful, non-violent manner, (2) use non-violent confrontation to raise the level and quality of public debate, (3) exposing threats to the environment and finding solutions we have no permanent allies or adversaries, (4) ensure our financial independence from political or commercial interests and (5) seek solutions for, and promote open, informed debate about society’s environmental choices” (Greenpeace International).

Greenpeace and the 21st century Environmentalism. (2016, Dec 22). Retrieved from https://studymoose.com/greenpeace-and-the-21st-century-environmentalism-essay 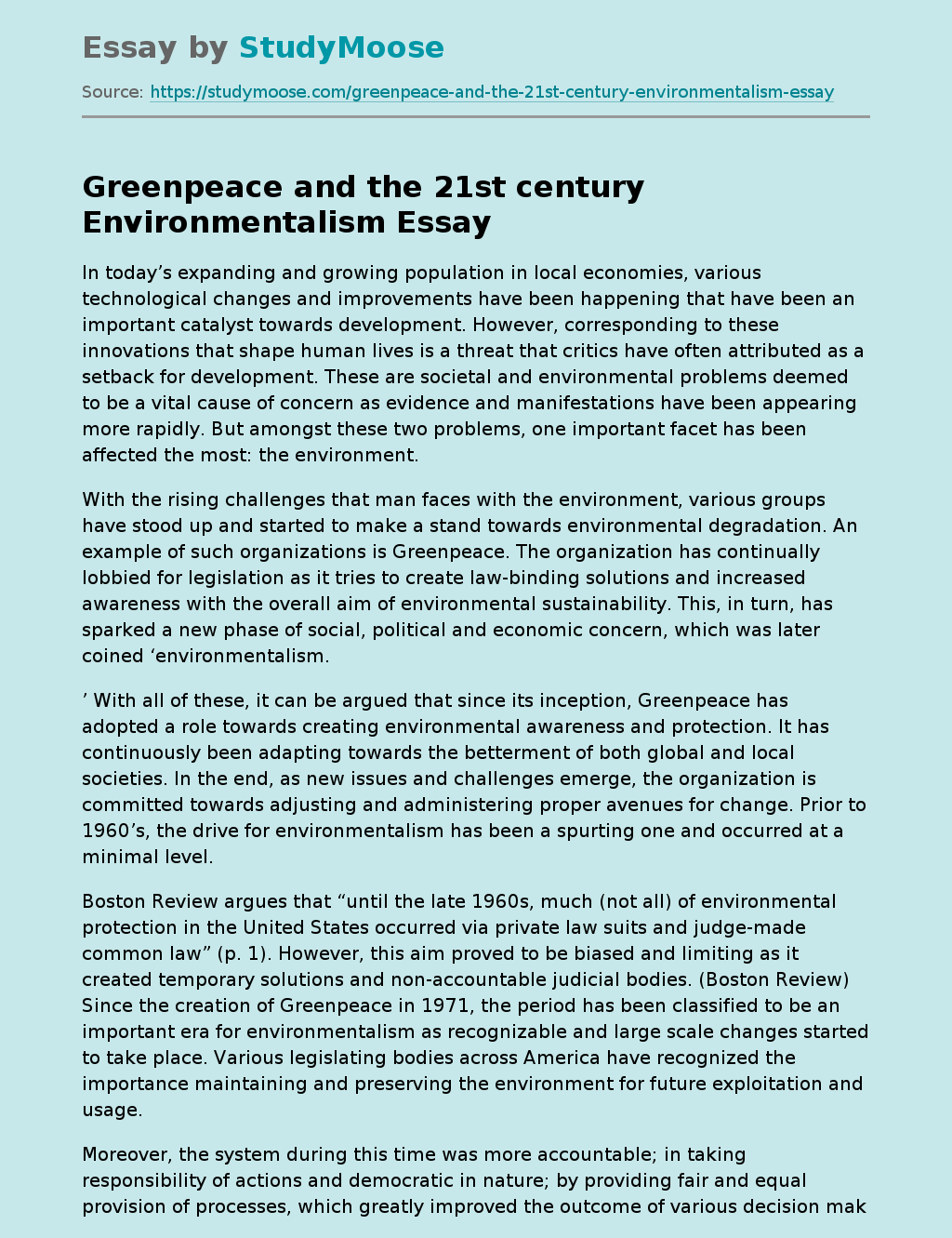