In 1954, George Devol created the first programmable and digital robot. At first, it was an accident. Since then, robotics has gone through a massive change in design and technology. More than a million industrial robots are now in use, nearly half are in use in Japan. During the 20th century, robots were simple and used to aid people. In today’s society, we use robots to help us with many tasks, cleaning, cooking, military missions and many other things. Now, robots are much more complex than when they were first invented.

Don't use plagiarized sources. Get your custom essay on
“ Robots Good Or Bad ”
Get custom paper
NEW! smart matching with writer

Inventors are trying to create robots that can think, have emotions and are able to be control by themselves.

The fast-food company, McDonald’s, is going to start using robots/kiosks to collect orders. These ideas create controversy. If robots have these programs in them and are available for public sale, will the human race become unnecessary and will the robots control us? Many other questions come up when the topic of robotics come up.

Are robots a good thing or bad thing for our 21st century society and lifestyle. Their advantages and disadvantages to having robotics in our daily lifestyles. Even if you do not think robots should be apart of our life, just think about how much better your life will be if we had them.

There are many advantages to having robots in our 21st century society. Robots can be made and programed to do many tasks that humans may not be able to do. Robotics inventors have been creating military robots that do what our soldiers do now.

If Robots replace soldiers, it would save many people’s lives.

Inventors have been testing and creating robots that can move and shoot enemy targets. Also, we could use robots for nightly shifts for regular hospital patients. Another advantage of robots is that the could eliminate the problem of overworking employees. For example, the fast-food company, McDonald’s, is going to start using robots/kiosks to collect orders. If we use robots instead of humans, companies would not need to pay as many employees. In conclusion, robots would be advantage to the military,to resolving the problem of overworking employees and to replace simple fast-food jobs.

There are many disadvantages to having robots. One disadvantage of Robots are they are not humans (obviously) so, they do not have real emotions. Having no real emotions, can cause conflict between the machine and the human. If we have machine and robots to deal with ill patients, they would not understand our problems or our feelings. People and animals have emotions, not robots or machines. If robots start to take jobs, our economy will decrease. If our economy decreases, lives will be ruined. Robots can have malfunctions and can not work. If our lives depended on robots, how would we live without them or the resources they need? Another disadvantages of robots is that they are as smart as their creator makes them. Robots can not learn or think how humans do.In conclusion, robot do not have real emotion or real brains.

I think Robots are only necessary for military use not for companionship. I think that because robot are not God’s creation. They are some man made machine that God did not intend on having on this earth. Robots do not have real emotion or a real heart. I do not think robots should take care or befriend any human. The problem with robots is that they do not have a moral compass or heart so how can they could they really connect with the person. What if they use the robots for military missions, the robot may shoot a little child.Our world has changed so much. Our world has lost human connection, people are too busy on their phones trying to disconnect from the world. I am disappointed that our world has become so self-centered, selfish and worried about social media and technology I feel like if we have robots, human will never need to communicate. In conclusion, I think Robots will ruin humanity.

One day, robots will be a strong part of our world. They are already starting to run our world. People that are extremely ill use robots to go to the place or meeting that need to go to using a facetime like program attached to a robot. Our military is starting to use robots for military missions. Even big Corporations are going to start using robots to replace people’s jobs. A robotics expert thinks that humans will start having sexual intercourse in the next four years (which is horrifyingly disgusting). I do not like the idea of robots at all, but it is going to be our life soon.According to www.motherjones.com, Robot will be apart of our daily life by 2040. The robotics world is changing so, we were changing. Get ready for a technology dependent world because it is coming soon. 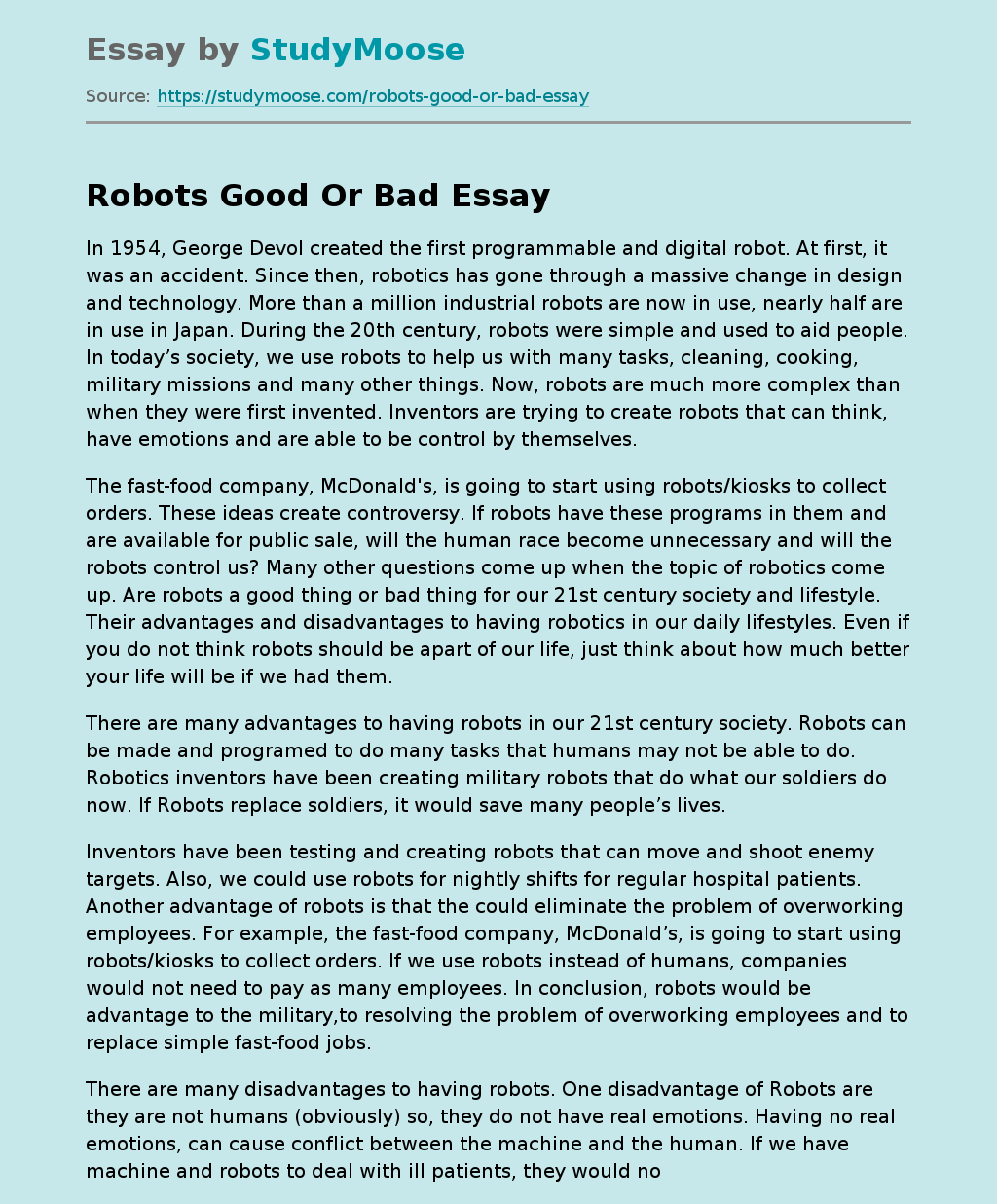