The Absolutely True Diary of a Part-Time Indian: Background and Main Characters

In the 1900’s, many Indians were abused. In the novel “The Absolute True Diary of a Part-Time Indian” by Sherman Alexie explains the difficulties in the narrator, Junior’s, life as an indian. His hope is encouraged by Junior’s past teacher, Mr. P, telling him to go to Reardan because he will not have the life he wants on the reservation. However, he encounters many difficulties throughout his times, but that does not stop him from going to Reardan, an all white school.

Don't use plagiarized sources. Get your custom essay on
“ The Absolutely True Diary of a Part-Time Indian: Background and Main Characters ”
Get custom paper
NEW! smart matching with writer

A stereotype Junior is against is the fact that all indians are drunks and serial killers by giving us an example saying, “After all, I was a reservation Indian, and no matter how geeky and weak I appeared to be, I was still a potential killer.” (Alexie 63) Sherman Alexie develops Junior’s character by using symbols, motifs, and language which reveals the theme, without hope you can not achieve what you desire, but with hope you can achieve the impossible, to further understand the life junior has, and the critical problems he faces because he comes from a community that lacks hope.

Symbols appear frequently in the novel, for example when he says, “..I reached up to scratch my face and squished the wasp that had been sucking sugar off my cheek” (Alexie 206) This example of a symbol represents gus sister as the wasp. The sugar on his face represents the hope Mary went to get, but instead of JUnior trying to save her, he killed her.

Mary thought she could also have hope like Junior, and junior blamed himself for the cause of her death. Referring back to the theme, Alexie also includes this to show that hope can be sometimes dangerous if you are not careful.

Motifs are symbols that repeat throughout the text. This idea could be the repetition of death and hope expressed in various ways. The significance of these motifs is that Junior has deep emotions for them and seems to care a lot for them for example when he gets called names at Reardan which makes him lose hope, and wanting to fit in. Another example is when he could not tell anyone that he was poor because he was afraid of what others might think of him, maybe a possible liar. He explains to us, “Yeah, so i pretended to have a little money. I pretended to be middle class. I pretended I belonged. Nobody knew the truth” (Alexie 119) This quote reveals that he tries to be like others so they could accept him, and because he is Indian he wants others to think good of him.

Language is an important part of the novel because it plays into repetition, similes, and hyperboles. Alexie describes Junior’s thoughts in various ways, for example using similes such as saying, “Like she’d baptized me with her pain” (Alexie 208) and “Like the coffin was settling down for a long, long nap for a forever pain” (Alexie 209) Not only does this show how he feels, but he is also describing his mom’s pain by using “like” or “as”. However, Junior having hope means he needs to endure through hard times because he is the only one with hope on the reservation and might encourage someone else to do what he did which may cause more deaths.. Mary already took a chance of hope, and it caused death. Alexie chose to use these to explain more of Junior’s character by showing them in his emotions. These examples from the novel were used in the case of death to place emphasis on the theme, without hope, you can not achieve what you desire, but with hope you can achieve the impossible but hope may not be always a good thing.

In conclusion, the process of constantly showing hope could result of losing a loved one, in the case of Junior, losing his beloved sister Mary. This allows Sherman Alexie to reveal the ideas of hope and the importance of confidence. This shows how Indians are in their true colors, and how Sherman Alexie explains it in his novel, not the way that people portray American Indians.

The Absolutely True Diary of a Part-Time Indian: Background and Main Characters. (2019, Nov 20). Retrieved from https://studymoose.com/the-absolutely-true-diary-of-a-part-time-indian-background-and-main-characters-essay 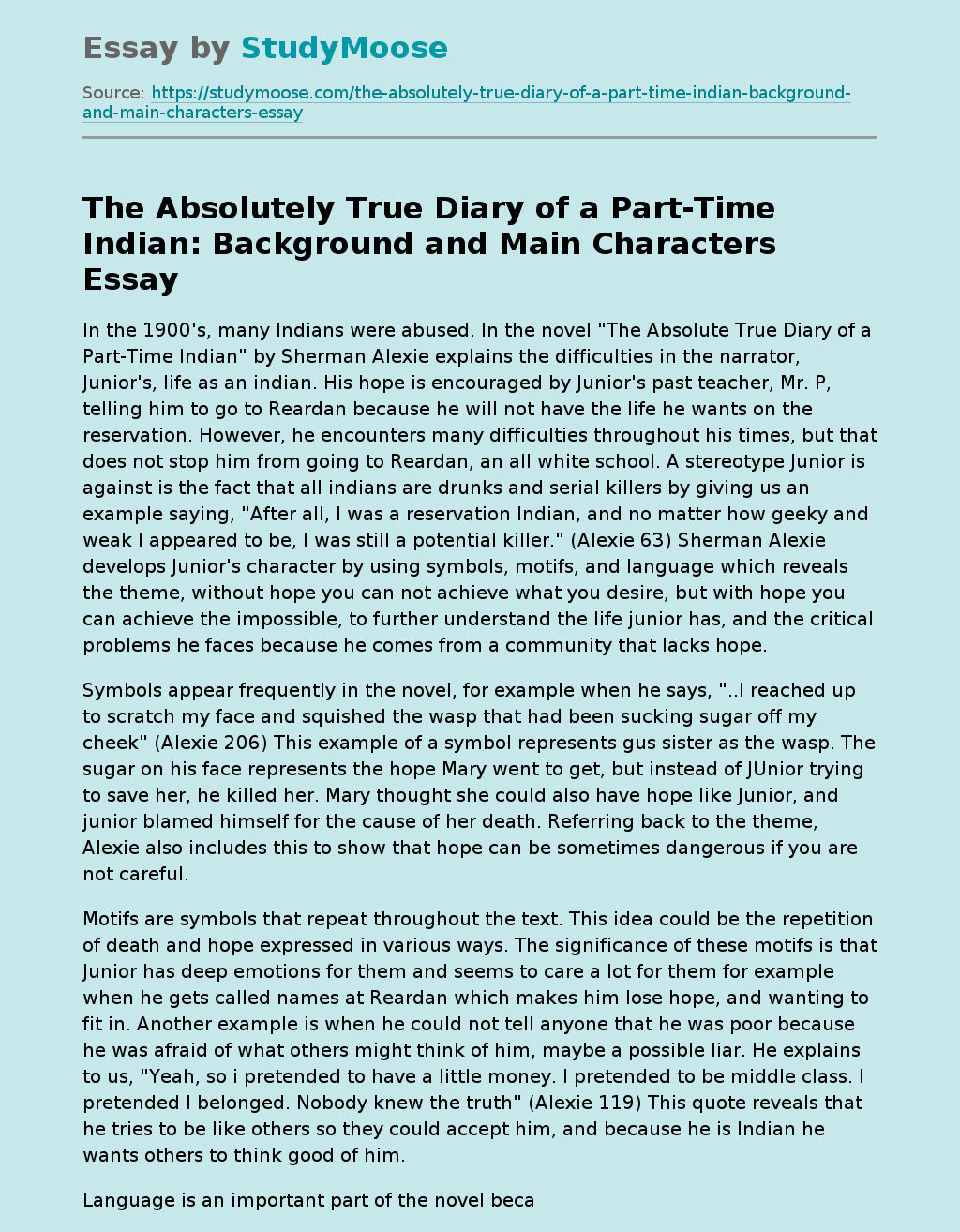