Write an essay outlining your personal response to this topic. “Mathematicians have the concept of rigorous proof, which leads to knowing something with complete certainty. Consider the extent to which complete certainty might be achievable in mathematics and the natural sciences.” To what extent can man use mathematics and the natural sciences to embrace the concept of achieving absolute certainty?

It is not possible for humans to achieve absolute certainty in knowledge using mathematics and the natural sciences. This is because mathematics is a creation of man to organize and communicate highly complex concepts and theories to others through a kind of language which goes beyond the spoken or written word.

Many people believe the written word to be more true that the spoken word, the same can be applied to mathematics. Just because something can be written in the numbered format by a credible source, it doesn’t mean it’s necessarily true.

The same can be said about the level of certainty to be achieved using proofs from natural sciences, with additional external variables.

This can be explained through evolution. The natural sciences were discovered, observed and recorded to be studied further by man. The small level of certainty which can be obtained is from the inability to change nature without physically disturbing it and that human observations themselves are a big problem in the natural sciences. Conversely, absolute certainty can only be found in a few instances in nature.

Math and the Natural Sciences are the two areas of knowledge which have the highest impact on our ability to achieve absolute certainty in knowing.

The world revolves around proving knowledge with scientific claims, however any such claims must originate from the mouths of highly regarded mathematicians and scientists. Just like beauty is in the eye of the beholder, validity of knowledge is in the mouth of a credible source. If I were to go up to a friend and state that there is a mathematical sequence that can be found in every naturally produced object on earth, the friend would hinder. If I were to approach this friend with long papers written by credible mathematicians, the friend would be swayed to believe its likelihood.

The same goes for the natural sciences. If I were to approach a friend and state that every living organism on earth is made up of billions upon billions of cells, assuming this friend wasn’t the brightest of individuals, the friend would not be completely persuaded by the fact. If I were to approach the friend again with evidence of this fact being true, backed by credible science, there would be a significantly higher chance that the friend would be convinced this fact remains true.

Logical reasoning is commonly connected with math, which is supported by certainty in that if A=B and B=C that A=C. When individuals try to back decisions with reasoning, they are using this deconstructive problem solving, assuming that it will lead them to the correct results. Unconsciously we are convinced that because both natural science and mathematics are backed by numbers, the results are going to be more accurate than more subjective reasoning. This goes without saying that most people believe that because both involve mathematical terminology, natural sciences and mathematics are interlinked. First of all, the concept of math is man-made, created to provide evidence for the natural sciences.

Observations are a big problem in science. If a biologist and a person with no experience with this work were trying to differentiate an Indian Rhinoceros and a Javan Rhinoceros, the biologist would rely on the perception of the rhino’s appearance and behavior. The biologist would have the training experience to determine these characteristics, but the person who doesn’t could easily mistake the two or not even know the differences. Although the biologist may have the title and credibility of making the conclusion to differentiate an Indian Rhinoceros and a Javan Rhinoceros, and the person with no experience and no training doesn’t, it doesn’t mean that the credibility of the biologist provides absolute certainty. Slight imprecisions are not very significant and probably wouldn’t alter the results. However, even the most insignificant factors would prevent the biologist from being completely certain. An example involving mathematics which follows similar principals to the biologist and the rhinoceros’ would have the same outcome. This saying that science and mathematics can only be highly meticulous; it cannot achieve absolute certainty.

Although ethics and emotion have very little effect on the natural sciences and mathematics, religion often does. The ethical viewpoint from which any mathematician or scientist have, will show no effect on his or her work. This is because a mathematician won’t refuse to answer an equation or attempt to explain a theory because of his ethical considerations. A scientist wouldn’t sit down and conduct an experiment using the wrong variables in a moment of extreme emotion. The only counter argument that stands is religion. Conversely, a hypothesis may be formed with religious consideration, straying far from achieving an absolutely certain result. Scientist William A. Dembski is a highly regarded advocate of the Intelligent Design theory. Although he thoroughly investigated the argument and determined that it’s more likely God exists, probably because of his religious background as a practicing Catholic. The religious bias shaped to his beliefs.

Unlike the chance of interfering religious ideology, scientists and mathematics generally steer from involving ethics or religion into their work. The only emotional factor would be commitment. Mathematicians and scientists who work in the fields of the natural sciences dedicate their lives to their work. They strive to find the absolute certain answer but the best they can ever do is find a highly precise one. This is why the advancement of knowledge often takes a long time. The mathematician or scientist will generally have endless approaches to solving or proving their work.

The golden ratio is a formula used in both mathematics and the arts which can be applied the geometric relationships. The ratio is one of the only absolute certainties founded by mathematics. The golden ratio wasn’t created, it was discovered in nature. Simply, the golden ratio is when a geometric shape (golden rectangle, regular pentagon) has the ability to be split infinite times, and remain in the same ratio. It is only found in nature and only proved by theories. The term golden relates it to perfection, or in relative terms, absolute certainty.

It is not possible for humans to achieve absolute certainty in knowledge using mathematics and the natural sciences. Mathematics is a creation of man to organize and communicate highly complex concepts and theories to others through a kind of language which goes beyond the spoken or written word. Most people do believe the written word to be more true that the spoken word, as seen, this can be shown just as thoroughly in mathematics and the natural sciences. Just because something can be written in the numbered format by a credible source, it doesn’t mean it’s true. The level of certainty to be achieved with absolute certainty of knowledge concludes with the same results, using multitudes of empirical evidences from observations. Therefore, although the natural sciences and mathematics may achieve highly precise and accurate results, with very few exceptions in nature, absolute certainty cannot be attained. 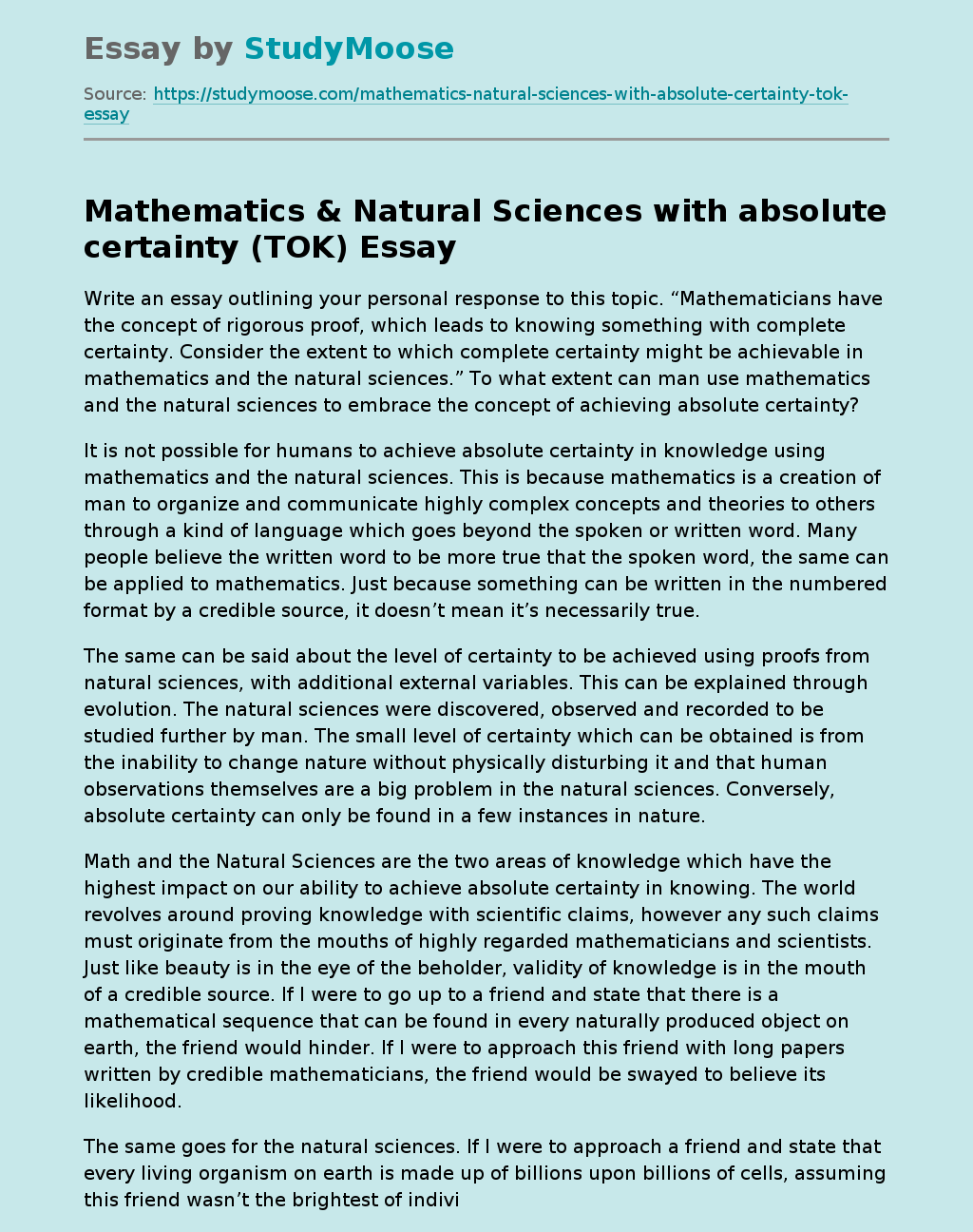