Science and an accumulation of facts -TOK essay

“Science is built of facts the way a house is built of bricks: but an accumulation of facts is no more science than a pile of bricks is a house” (Henri Poincare). Discuss in relation to science and at least one other area of knowledge. Science is an “intellectual and practical activity encompassing the systematic study of the structure and behaviour of the physical and natural world through observation and experiment”- The world of science and technology. The system explains natural phenomena by scientific observation and experimentation.

Don't use plagiarized sources. Get your custom essay on
“ Science and an accumulation of facts -TOK essay ”
Get custom paper
NEW! smart matching with writer

Scientists use educated guesses, a hypothesis, to pave their way for an experiment.

Experiments are designed to prove or disapprove the hypothesis and once their hypothesis is verified and true about certain aspects of the natural world, it is termed as a scientific theory with the condition that any hypothesis must be refutable. Theories of science help us comprehend the characteristics and processes of nature’s events. Karl Popper believed that scientific theories need to be falsified in order to qualify as ‘scientific theories’.

This means that for any hypothesis to be true, it must be disprovable in at least one way. If it is disapproved, a new scientific theory is formed.

Max Planck said, “A new scientific truth does not triumph by convincing opponents and making them see the light, but rather because its opponents eventually die, and a new generation grows up that is familiar with it. ” Hence, one theory is formed from another and in this way new ideas are replaced by old ones.

However, the limitation of Popper’s belief is that, it doesn’t take into account that many theories of science are simply observational. According to the Kuhns theory, ideas exist in specific paradigms; once new ideas are proposed and the old have been disapproved, there is a paradigm shift.

This happens over a period of time when scientists oppose to the old idea and promote the new idea. There is a change in people’s thinking and beliefs as a new scientific theory emerges. We can only shifts paradigms when there is another paradigm we can shift to. For example,I always thought the earth was flat when I was young until I questioned my parents about the truth of my thoughts. My thinking process immediately changed after their explanation of the earth being spherical. I began to imagine and think of things differently!

Another valid example would be what I learnt in my Economics class recently; there has been a significant paradigm shift in macroeconomics regarding the Keynesian theory. The movement for Monetarism over Keynesianism marked a significant shift. The fiscal policy was not considered effective for stabilizing inflation, in contrast to the time where both the monetary as well as fiscal policy was important. Therefore, with all the above discussed, science is a verified process-oriented formation of various scientific theories which were created and combined through intense experimentation.

Each experiment contributes to a scientific theory and combinations of the numerous theories burgeon to form science as a massive area of knowledge. In a similar way, Maths is a complex system. A building could act as a perfect analogy to Mathematics as it is a system having foundations. For the building to stand it must have a strong foundation; it is the same with Maths. Assumptions known as axioms provide the foundation, and through the process of deductive reasoning, eventually over a long period of time, mathematicians erect a building.

By using axioms as the foundation of the premises, mathematical proof is formed with the aid of valid deductive reasoning. These proofs then combine to form theorems and these theorems are then used to form further complex theorems, such as Geometry and Algebra, which ultimately give rise to the entire Mathematical structure as another massive area of knowledge. Thus, we can say that Science is built of facts and Maths is built of axioms, which is similar to how a house is built of bricks. However, what we must know is that simply ‘accumulating’ facts does not necessarily mean we have scientific evidence.

It’s a lot more than just figuring out numerous axioms. It is through the deductive reasoning and application that the mathematical structure exists. A house is not only built of bricks, but also of various other materials such as plywood, cement, walls etc; this is what actually ‘builds’ the house structure. All three structures would break down if there weren’t scientific facts/axioms/cement to hold the structure; this is because no structure is formed by simply stacking bricks on top of each other.

Since axioms are self proven facts, they don’t have any particular ‘proof’ of being true. This could be a potential disaster in being the foundation of a complex system. How do we know if the foundation is strong enough or true to withhold the entire structure? Due to one small mistake in primary stages, the whole structure could disintegrate or turn out to be false as one theorem relies on another, forming numerous theorems. Euclid, 2300 years ago, identified the first known set of axioms which were called as postulates.

These formed Euclidean geometry; they had no formal proof and were derived from experience. It was considered true for over 2100 years by the coherence test for truth as well as the correspondence test for truth; however, it turned out to be that the fifth axiom formed was wrong. This shook the very foundation of the system and paved way for the non-Euclidean geometries of Nikolai Lobachevsky. This changed the foundation of geometry and caused a shift in people’s way of thinking as most people blindly believed in the Euclidean geometry, almost a paradigm shift in the world of Mathematics.

Hence, an accumulation of theories do not necessarily need to be true as the basis of the structure is not verifiable. I strongly believe that science and maths are areas of knowledge that exist because of strong foundations. However, there may be flaws that could cause the structure to tremble but these are just paradigm shifts that could get the structure back to being strong with justified reasoning.

Science and an accumulation of facts -TOK essay. (2020, Jun 02). Retrieved from http://studymoose.com/science-accumulation-facts-tok-essay-9760-new-essay 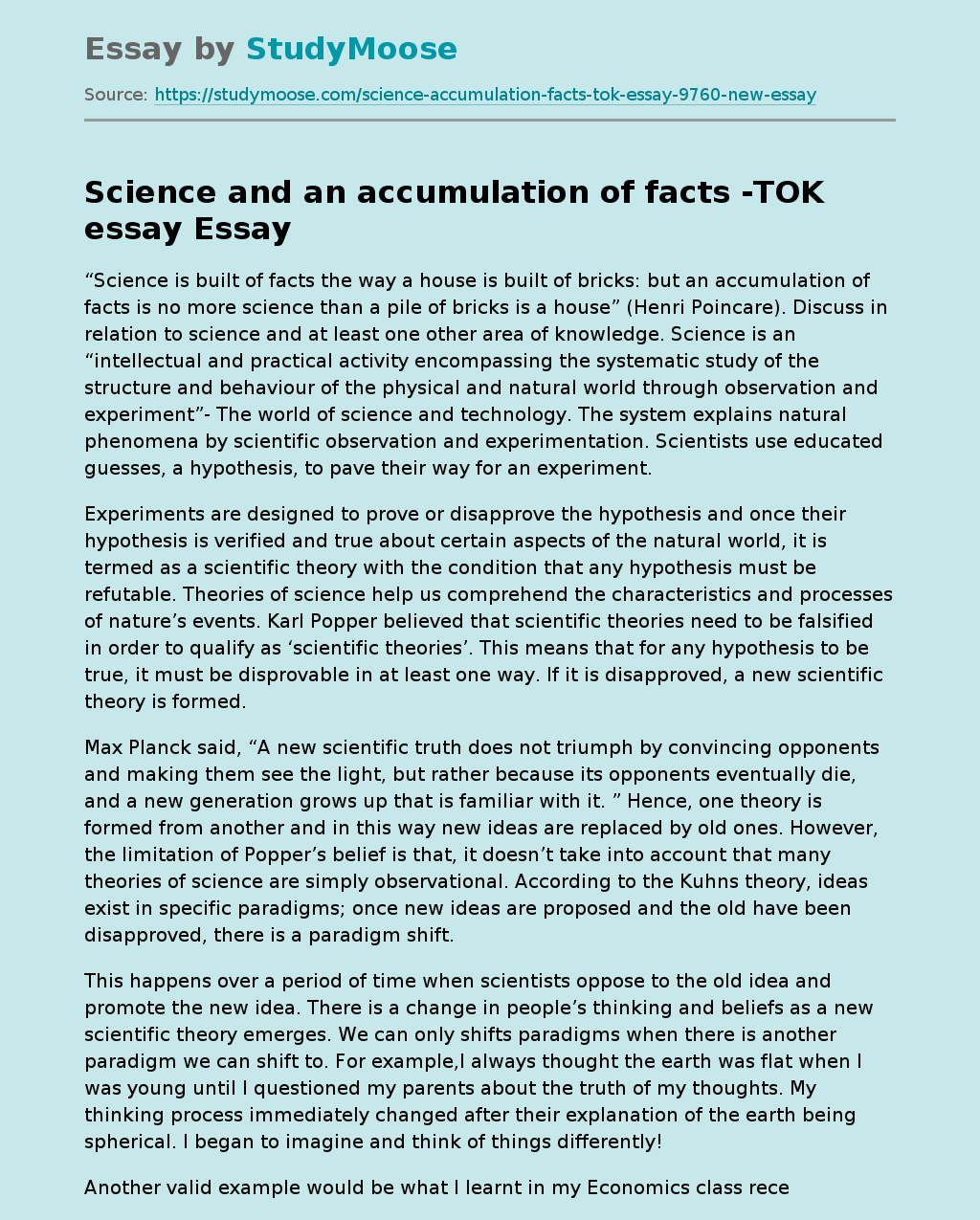