According to the FBI crime clock, a violent crime occurs every 26.3 seconds (URC Publications, 2016). Meaning, there is an abundant amount crimes for detectives and forensic scientists to solve. When a crime is committed, the police are the first to be contacted, following with detectives arriving later to piece together the scene then the evidence is sent into a lab for forensic scientists to figure out. When an event like this happens, people involved such as family members, victims, witnesses and so on are extremely concerned and patiently waiting on the verdict.

Don't use plagiarized sources. Get your custom essay on
“ According to the FBI crime clock a violent crime occurs every 263 ”
Get custom paper
NEW! smart matching with writer

The time it takes for a crime to be solved can take anywhere from a few weeks to years. More crimes committed in the 1800 and 1900s were considered cold cases because of the lack of resources and technology available to solve a case. Technology such as, DNA identification, drones and even 3D forensic facial recognition were not available then to solve cases. Now, more cases are being solved due to the advanced technology.

With crimes dated back 100 plus years ago it is not surprising that new technology is making crime solving more accurate, but technology has advanced more than expected in the past 100 plus years. With further explanation, in the 1800s, interviewing criminals, toxicology, photography and the development of the first microscope were all contributors to making crimes easier to solve. In the 1900s, the first contrast microscope was created, the first breathalyzer and DNA profiling (New York State Police, 2017). In the 21st century, ballistics, hair analysis, facial recognition and much more is being used to make crime solving easier.

Meaning, crimes are being solved more accurately and are becoming more proficient each century. This is a vast step not only for forensic scientists, but for all humans involved with a crime. The police who are waiting for tests to come back are coming back more accurate. Along with victims who wait for an outcome, witnesses who wait to be informed, concerned family members, detectives and perpetrator. New technology not only helps the people involved, but also trials. Technology that is provided now makes evidence concrete and unarguable. Such as, if a person commits a crime and they cannot be found but only a piece of hair is left behind at a clean scene, that hair sample helps figure out who was present at scene. New technology and resources help countless people during a traumatic time.

Crimes happen everyday and have a huge impact of any human who is involved or even just hearing about it can change how a person views life. When police first became established, they were seen as non beneficial and citizens had no faith because the system wasn’t very efficient. This is because in the 1800s, watchman often slept and drank while on duty. People were also put on watch duty as a form of punishment showing that they did not care so much for legislation. Early policemen did not want to wear badges because police already had a bad reputation and they didn’t want to be identified as the people that no one liked. The first organized police force on full time duty was created in Boston in 1838 (Waxman, 2017). Boston was a large shipping center so people were hired to protect their property and goods. This is when police were seen for the collective good. After this, cases were taken to the police more often which helped the boom of technology to start advancing for more accurate and simpler crime solving. Besides the fact that policemen were not taken serious, technology was not yet invented to help find a criminal. For example, if a crime was committed in the 1800s and early 1900s, the perpetrator would only have to get out of town not to be caught. There was limited ways to track down a criminal until the 1890s when police started using fingerprints and dusting to help find the suspect (Emsley, 2015). Throughout the centuries, police have became respected and trusted making the need for new technology and resources to help citizens.

Without the resources that are available today, society would still be in the state of mind that police are useless. Without cold cases, police would have nothing to come up from. Without all of the mistakes from the past, technology for crimes would not be as advanced as they are now. There will always be crimes that turn into cold cases but with the technology that is available, the number of cold cases continue to decrease. The past is what we reflect on, not what we degrade ourselves from. Resources used for the criminal justice system are significant in every single case involved. Each case can require a different resource whether it be flying a drone to find a missing personnel or using a blue and orange lighting to help detect bruising under the skin, each toll is significant ( Kaste, 2015). This topic strikes as compelling due to the fact of how far technology has come. Technology was basically a word unspoken of in the early 1800s until people started to advance their knowledge of making resources more beneficial. Resources used during the time period of the 1800s was for the most part talking to the people involved and taking pictures of the scene. These are tactics still used today, but they have been improved and have made new technology based on the past. Ideas and inventions are often overlooked. People will hear of a new invention or some new technology, find it intriguing, maybe share it on facebook for their friends to see, then it eventually fades into just another advancement. What people do not understand is every advancement and every idea brings opportunity for something new to evolve. The past is used fix the mistakes made and learn from them to make something better being the significance of this entire topic.

Everyday, smartphones, computers and the internet are all used on a basis. Whether it be for school or work purposes only, the internet and devices are relied on heavily in the society of today. They are used and overlooked and many people do not wonder how society came to this point and how beneficial it is. Technology is used for so much more than phones and computers, it is used to save lives everyday and even every hour. Accidents and purposeful harmings happen by the minute. If society was still in the state of mind of the 1800 and 1900s, people would still be dying from gunshot and stab wounds that could be prevented. Illnesses such as the flu and tuberculosis would still be making millions die today if the world did not advance. Technology advancements in the criminal justice system is something taken for granted that should be appreciated more. The system and the technology that comes with it helps Americans every day. Technology not only save lives, but it helps citizens stay protected. Such as basic devices that can easily overcome car security measures. Along with the Internet Watch Foundation using PhotoDNA to create unique identifiers of child exploitation images, which are helping authorities to target websites that are fueling that are fueling new abusers, rather than redistributing images (Gash, 2017). These are just a few examples of how technology helps humans on the daily basis. Technology does plenty to help the average American most just do not realize the benefits that are offered.

Technology is continuing to advance throughout each century whether it be fingerprint analysis, dusting or photography. All advancements are making the society better one step at a time. The advancements are necessary for an everyday living and only those who need help are the only people who may only notice this. Technology for forensic science in the 1800 and 1900s was easily arguable without hard facts while nowadays evidence is concrete impacting victims, suspects, police and many more people. Technology advancements arouse from policing in the 1800s making this much more significant noticing how drastically time has improved technology today. The significance may not be noticed by the average American but should be appreciated due to the fact of how many people these advancements help. Therefore, more crimes committed in the 1800 and 1900s were considered cold cases because of the lack of resources and technology available to solve a case. This begs the question, could you live in a society in which technology couldn’t help catch criminals to ensure safety in society?

According to the FBI crime clock a violent crime occurs every 263. (2019, Dec 16). Retrieved from https://studymoose.com/according-to-the-fbi-crime-clock-a-violent-crime-occurs-every-263-example-essay 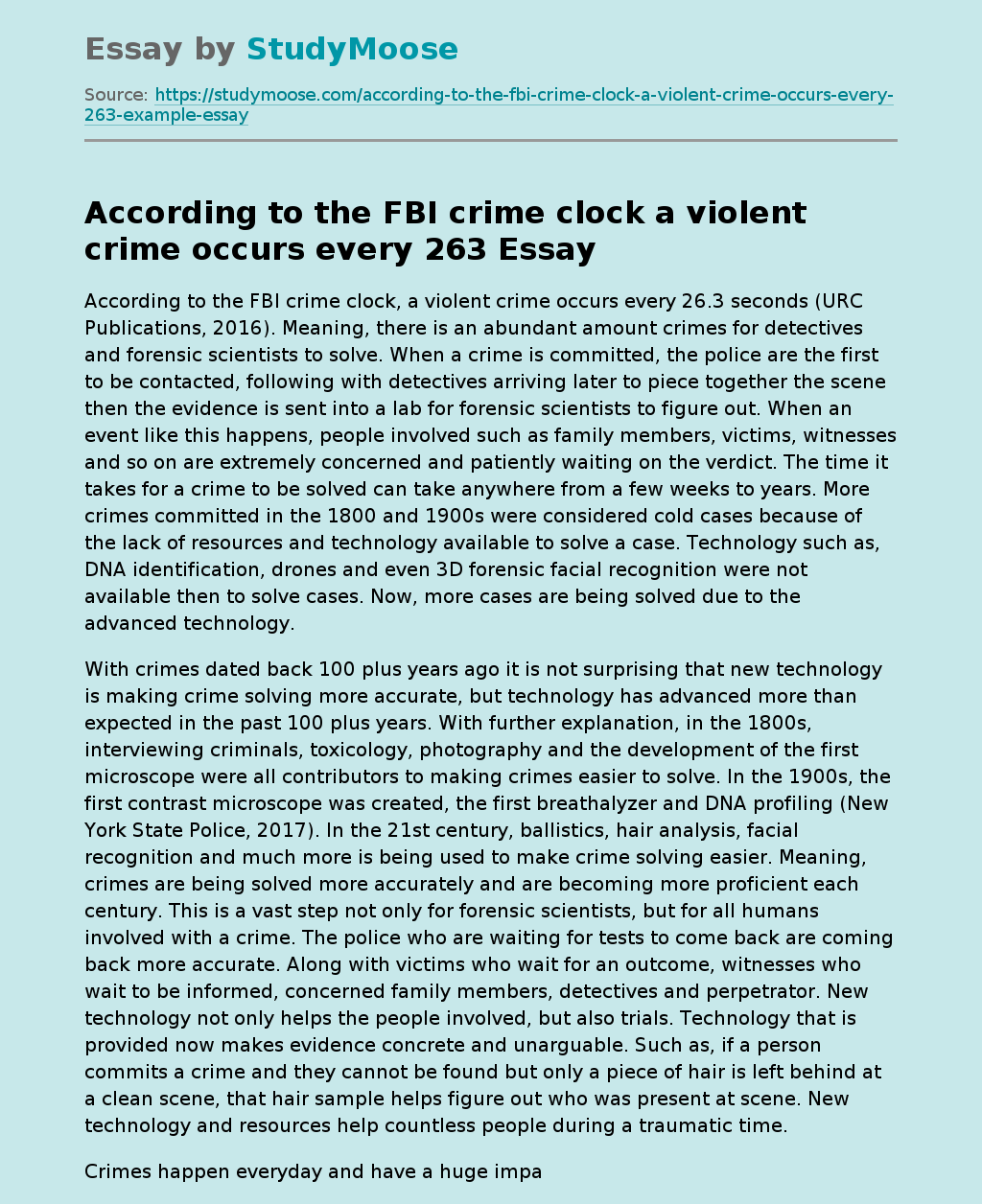