Turn in your highest-quality paper
Get a qualified writer to help you with
“ The Latent Traint Theory and Violent Crime ”
Get high-quality paper
NEW! AI matching with writer

The Latent Trait Theory suggests that criminals are born with certain personality traits that make them prone to criminality. For those not born with those traits, it is also possible to acquire them early in life. These latent traits include impulsiveness, defective intelligence, genetic abnormalities, imbalances of the physical-chemical functioning of the brain caused by drugs, chemicals, and injuries, as well as axis II personality disorders as listed in the Diagnostic and Statistical Manual of Mental Disorders (Siegel, 2011).

The Latent Trait Theory suggests that humans are controlled by a fundamental ain trait, which controls one’ behavior. Some supporters of the Latent Trait theory believe that this main trait can change over the course of one’s lifetime. Others suggest that this main trait remains stable and inflexible over the course of one’s life. Further, one’s environment can influence how this trait takes shape during the course of a lifetime. If opportunity to commit crime presents itself, then individuals, who are already prone to criminality due to the presence of a major latent trait, will most likely turn to crime.

According to the Latent Trait Theory, criminal behavior is determined by the presence of a major latent personality trait, which again is determined by external forces, such as interpersonal relationships, and criminal opportunity (Siegel, 2011). Violent Crime According to the FBI’s Uniform Crime Reporting Program (UCR), an estimated 1,246, 248 violent crime occurred in our nation in 2010. This is a decrease in violent crime by 6 percent from the previous year. Yet it still means that 403. 6 violent crimes occur per 100, 000 inhabitants.

Of these, aggravated assaults account for the highest number among violent crime, followed by robbery, forcible rape, and murder. Most violent crimes are committed with the use of firearms (FBI, 2011). Victims of violent crime and their families often experience immense physical distress, in addition to negative psychological consequences, such as for example behavioral, and social consequences like depression, substance abuse, fearfulness, and post-traumatic stress disorder (Simon, Kresnow, & Bossarte, 2008). In addition, violent crime that occurs within the privacy of one’s home often does not get reported.

Violence and violent crime that occurs in relationships are not uncommon, and often the victims do not report the crime because they are intimidated, or fearful (Simon, Kresnow, & Bossarte, 2008). Latent Traits and Violent Crime Impulsivity is one of the major latent personality traits that make individuals prone to criminality, and according to Wilson and Hernstein (1985), impulsivity is the actual main trait of offending (as cited in Zimerman, 2010). Sensation seeking, and low self-control have been linked to impulsivity, and are latent traits of criminal offenders’ personalities (Zimmerman, 2010).

Depending on an individual’s environment these latent traits were already present at birth or were acquired very early in life and developed into criminal and violent behavior. Violent crime is often the result of impulsive actions. In many cases crime itself is planned to some degree, but when the plan gets interrupted, sudden violence might result (Zimmerman, 2010). Impulsive behavior is often the reason for crime to become violent; many murderers do not plan to murder another individual, but depending on the situation, they act upon what triggers them impulsively and in a way that they did not plan (Zimmerman, 2010).

Latent traits that are not present at birth, but are acquired during childhood and adolescence are often the result of exposure to violence. According to Cohn and Crim (2008), youth that grow up in violent a neighborhood and are exposed to violence, or have violent parents, are more likely to commit violent crime in adolescence and adulthood (p. 1). Statistics show that over 60% of American youth are exposed to violence, at some point in their teenage years, whether it is perpetration or victimization.

In addition, parental and peer relationships become increasingly more important for youth as they grow up. These interpersonal relationships, when violence is modeled, influence youth to acquire the same latent traits for violence themselves. Fighting is considered perpetration, and those who fight tend to have the same characteristics as those who commit violent crime; they tend to be male, they have a tendency to impulsivity and sensation seeking, and they tend to engage in alcohol and substance abuse (Farb Feldman, Grunden, Matjasko, & Needham, 2010).

Research on violence has proven that youth who do engage in violent behavior are prone to violent behavior, and they are impulsive or have difficulty controlling their temperament. Those latent traits are more likely to be found in certain ethnicities, such as African Americans, and Hispanics, but are much less common among Caucasian Americans, or Asian Americans. Therefore the Latent Trait Theory suggests that traits, such as impulsivity, low self-control, difficult temperaments, and sensation seeking re more likely be present in minorities (Farb Feldman, Grunden, Matjasko, & Needham, 2010). 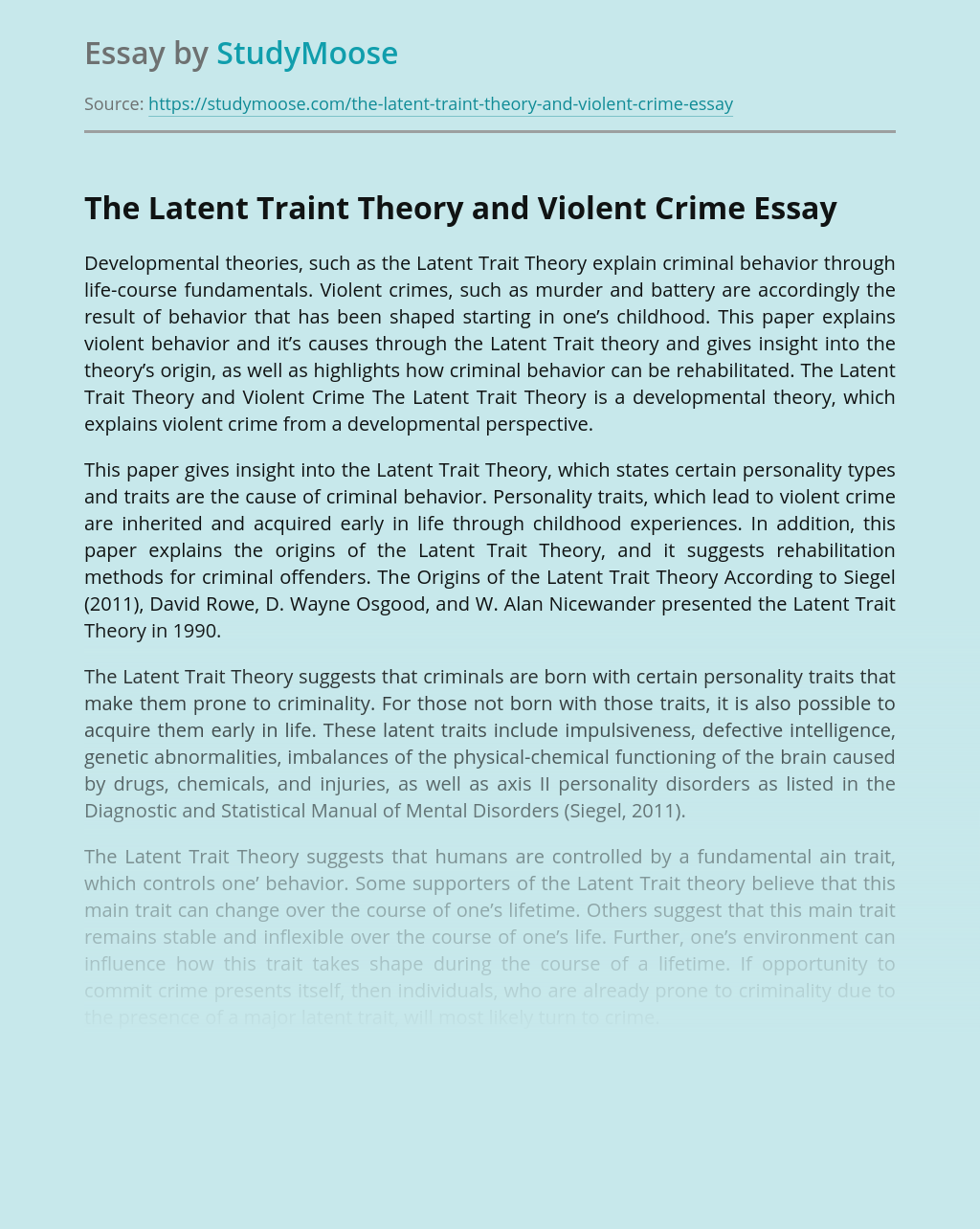 Turn in your highest-quality paper
Get a qualified writer to help you with
“ The Latent Traint Theory and Violent Crime ”
Get high-quality paper
Helping students since 2015
Stay Safe, Stay Original