Simon Armitage writes many poems about the topic of violence. Two of such poems dealing with the issue of violence are ‘hitcher’ and ‘gooseberry season.’ The poem ‘hitcher’ gives us a hint that the poem may be about a hitch-hiker. The title is suitable for the poem because its called ‘hitcher’ who is short for a hitcher-hiker, which is presented in the poem, also in the poem another male is also in the poem. The speaker of the poem is the male inside of the car, this is obvious because throughout the poem the speaker refers himself as ‘I.

Don't use plagiarized sources. Get your custom essay on
“ Gooseberry Season Help? ”
Get custom paper
NEW! smart matching with writer

’ A quote to prove this is “I let him have it.” The poem ‘hitcher’ is about a male who is having a bad day because his boss has forced him into going into work because he has had too many days off work and has refused to go in. He later picks up a random stranger (the hitcher-hiker) and then attacks him and throws him out of the moving car, then watches him “bouncing off the kerb, then disappearing down the verge.

Simon Armitage uses the world “krooklok” in the poem, the word ‘krooklok’ sounds quite evil, the fact the male in the car used a krooklok to attack him suggests that he wasn’t originally planning on picking up a hitch-hiker and then attacking them, he might of just had a bad day and felt that was the best way of clearing his anger. If he planned to hurt the hitch-hiker, there would have been a more serious weapon.

Simon Armitage uses the word “ansaphone” instead of ‘answer phone’ expresses the male in the car (the yuppie)’s individuality.

This is because he doesn’t want to be like normal businessmen, therefore he spelt answer phone wrong on purpose and attacked the hitchhiker. Armitage uses personification in ‘hitcher’. A quote to prove this is “the ansaphone kept screaming.” There isn’t any way that an answer phone could physically scream as it’s an inanimate object. He also uses enjambment “I let him have it on the top road out of Harrogate –once with the head then six times with the krooklok in the face – and didn’t even swerve.” The fact he put that sentence into four lines suggests the fact that he attacked him within a few moments and that it happened very quickly and didn’t have time to pause. 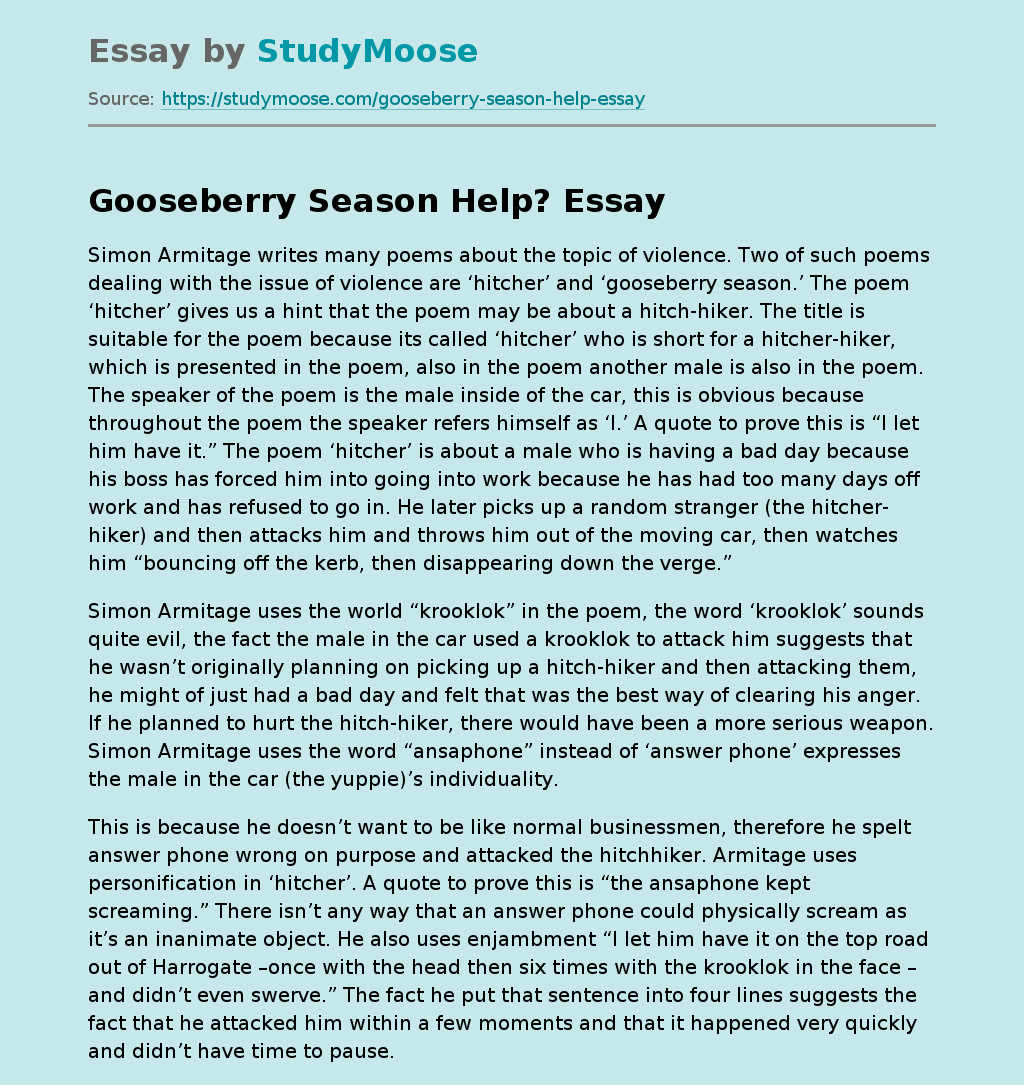