‘Salome’ and ‘Hitcher’ both use a first person persona and with that, give us insight into their feelings and the theme of violence throughout both poems.

In ‘Salome’, Duffy’s character uses a nonchalant tone with no remorse when depicting her actions, which is also present in ‘Hitcher’ too. Salome had ‘done it before’ and will ‘doubtless do it again’ but is oblivious of the repercussions of what she has just stated. She is a promiscuous character and is unaware of what she has done until the last stanza, whereas the narrator in ‘Hitcher’ is fully conscious of his actions.

Don't use plagiarized sources. Get your custom essay on
“ Compare How Duffy and Armitage Write About Violence in Salome and Hitcher ”
Get custom paper
NEW! smart matching with writer

He ‘lets him have it’ and is proud of his actions and his ability to not swerve while attacking the hitchhiker. His colloquial manner represents that he sees it as an entertaining story and how he is unaffected by his actions.

Near to the conclusion of ‘Salome’ she decides to clean up her act, becomes repentant of how she has behaved.

In comparison, Hitcher just drives away from the body and is ignorant as to his fate; he does not care if he’s alive; he just ‘lets him out’. His casual description of how the body bounces and disappears questions his mental stability and his possession of a conscience. Salome also defends herself, describing the man as a ‘beater or biter’, proposing that she reacted in self-defence although she could also be referring to herself. The plosive ‘b’ also portrays the violence involved with those words.

At the end of ‘Hitcher’, the concluding couplet is sarcastic and ironic, seeing as the intended recipient is no longer with him.

He recalls thinking ‘Stitch that’ as if the hitchhiker got what he deserved. To him, it’s a joke. Similarly, Salome states ‘ain’t life a bitch’, which is also ironic, as the person she is speaking to is dead. She doesn’t care; he could be any old Simon Andrew or John.

Hitcher’s reference to the weather is normal, which shows how his behaviour hasn’t impacted him; the murder was the therapy for his anger as his outlook is now pleasant. The fact that he and the hitchhiker were of the same age wasn’t of particular consequence to him, they both had the same opportunities, yet vastly different paths. The mention of this shows how he can crack at and given moment, and his attention for the inconsequential. Salome’s therapy for her hangover was her maid’s ‘innocent clatter’, so unlike Hitcher’s methods. The fact that Salome calls her maid ‘innocent’ shows how naïve and unknowing she is about Salome. She’s Salome’s opposite. The rhythmic repetition of the ‘er’ sound emulates the sound of her footsteps which soothes Salome after her night on the ‘batter’. This shows the violence which ensued last night and all the aggression, as well as inverting the female stereotype or passiveness.

Compare How Duffy and Armitage Write About Violence in Salome and Hitcher. (2016, Dec 27). Retrieved from https://studymoose.com/compare-how-duffy-and-armitage-write-about-violence-in-salome-and-hitcher-essay 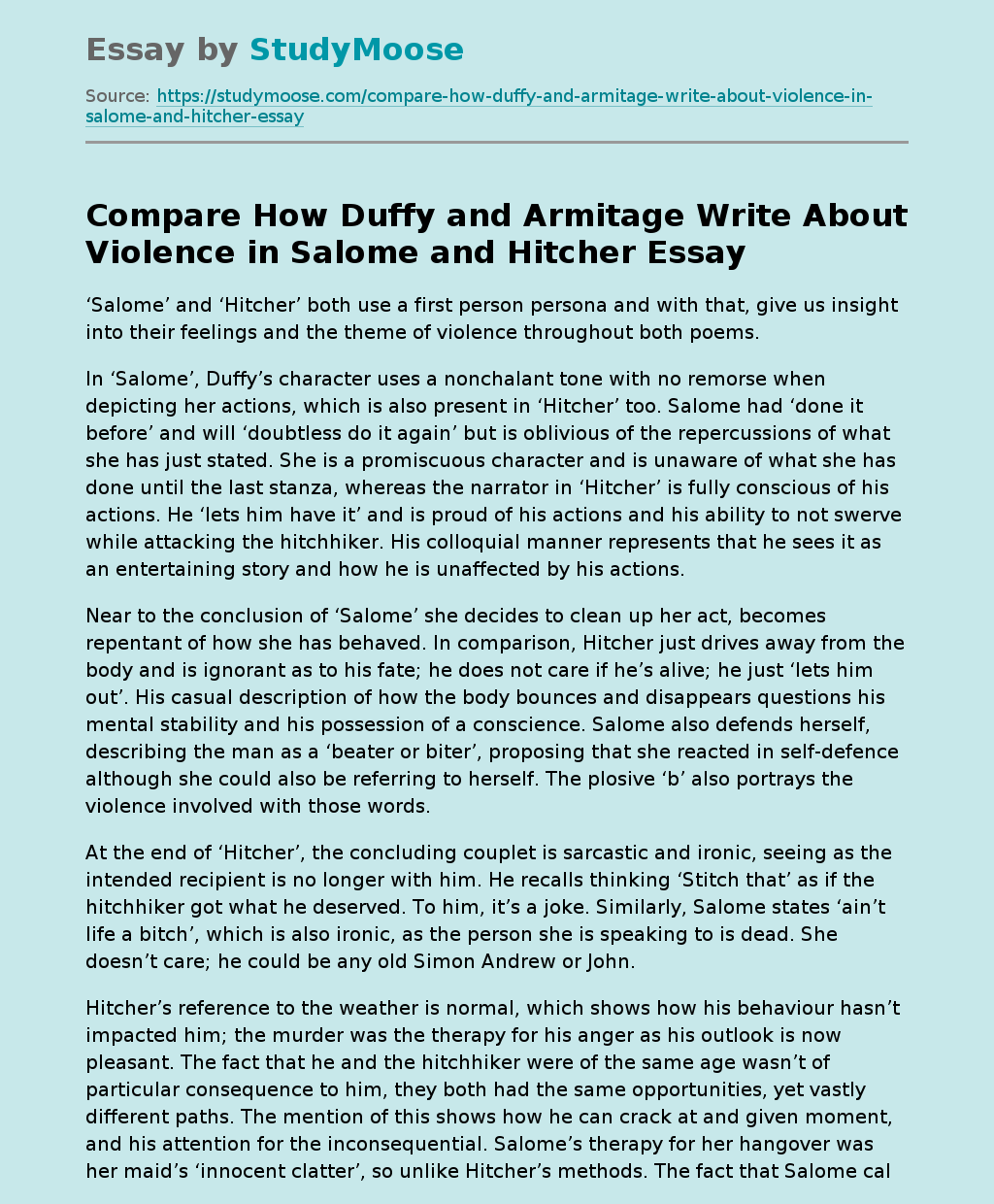