Don't use plagiarized sources. Get your custom essay on
“ Compare and contrast two poems, In Mrs Tilscher’s Class by Carol Ann Duffy and Lanarkshire Girls by Liz Lochhea ”
Get custom paper
NEW! smart matching with writer

Similarly, the title of Lanarkshire Girls also has a youthful undertone by the use of the word, “girls. ” This suggests a certain immaturity in the speaker; she is not yet a woman, she is still a child. Moving on, key to understanding how the poets write about childhood is their use of imagery. Beginning with In Mrs Tilscher’s Class, Duffy begins by depicting a day in primary school, utilising the method of listing: “Tana.

Ethiopia. Khartoum. Aswan. ” These names have an intrinsic glamour because they are so foreign, and they help capture the wonder and discovery of childhood.

She uses playful imagery, such as, “a skittle of milk,” which is a pun on childhood toys. The sense of playfulness is continued through her use of a transferred epithet, “the laugh of a bell swung by a running child. ” In this case the laughter of the children is transferred onto the bell, perhaps to symbolise the vigorous ringing an the joy of playtime.

Contrastingly, Lanarkshire Girls uses imagery that conveys a sense of anticipation rather than playfulness, through phrases such as, “old blossom on the roof / chucked hard wee balls of unripe fruit. Her speaker is at a more mature stage of childhood than Duffy’s speaker, after all. The imagery used suggest that the girls have passed the spring of the childhood, yet are still, “unripe,” and not quite adults. The use of the colloquial phrase, “wee balls,” gives the poem an authentic and local Scottish voice, which contrasts with Duffy’s use of foreign, African words. Moving on, both poems create a sense of wonder, awe and discovery as they progress into their second and third stanzas.

Both poets make extensive use of the method of listing, for example in In Mrs Tilscher’s Class Duffy lists a lot of sensory imagery to present the reader with a stimulating primary school environment, such as, “the classroom glowed like a sweetshop,” using a simile to create an almost heavenly image of the classroom. She also uses olfactory imagery, “the scent of a pencil,” and auditory imagery, “a xylophone’s nonsense. ” Duffy skilfully uses language to capture all the sensory experiences of childhood.

Likewise, Lochhead uses listing in Lanarkshire Girls to create both a visual and auditory depiction of Glasgow, as seen through the eyes of an excitable fourteen year old speaker. Lochhead describes, “shabby scheme, gospel halls, chapels, Orange halls. ” In this case the use of sibilance captures the sounds of the city itself. Moving into the third stanza, the sense of wonder and discovery is continued through the use of plosive alliteration, such as, “proud pubs,” and, “glamorous Gallowgate. Even the most mundane aspects of urban life can be transformed when looked at through the eyes of a child. Both Duffy and Lochhead use extensive imagery to view the world through the lens of childhood. However, in the second stanzas both poets introduce elements of unease as they talk about childhood. In In Mrs Tilscher’s Class Duffy interjects the names of the infamous Moors Murderers: “Brady and Hindley / faded like the faint, uneasy smudge of a mistake. ” Her use of a simile conveys a sense of unease at the mention of these sinister characters from the outside world.

Likewise, in Lanarkshire Girls Lochhead hints that for these girls their childhoods cannot last forever by mentioning, “doctors’ surgeries, the crematorium. ” Even though it is a poem about the excitement of late childhood, the facts of life and death are inescapable. Both Duffy and Lochhead convey that children cannot be sheltered from the real world forever, and will eventually have to grow up and face the trials of life. The final aspect to note about the imagery is the sexual undertones that are introduced in the poems.

In Lanarkshire Girls this aspect is introduced at the very start: “Summer annoyed us thrusting… like a boy. ” Summer is personified as an annoying boy, capturing the fact that these girls are beyond the playful stages of childhood and are progressing into puberty. Likewise, the final stanza of In Mrs Tilscher’s Class captures similar sentiments through phrases such as, “the air tasted of electricity… under the heavy, sexy sky. ” This use of synaesthesia captures the upheaval of hormones and physical changes that come with the end of childhood and the onslaught of puberty.

Childhood cannot last forever; at some point we must leave primary school behind and mature, both physically and mentally. Moreover, both poets skilfully manipulate the tone of the poems to convey the ups and downs of childhood. In In Mrs Tilscher’s Class, Duffy begins with an upbeat tone of fascination and comfort, captured through lines such as, “Mrs Tilscher loved you. ” There is a tonal shift, however, once Brady and Hindley are introduced and from there the poem becomes slightly more tense, which matches the deluge of hormones that accompany the transition between childhood and adolescence.

This sentiment is captured in lines such as, “a tangible alarm made you always untidy. ” On the other hand, Lanarkshire Girls stays hopeful and optimistic from start to finish, other than the brief mention of, “the crematorium. ” These are girls at the very end of their childhood, and Lochhead conveys the excitement of this period of life through phrases such as, “dreaming ourselves up. ” Furthermore, we could also consider how the poets make use of the form of poetry when writing about childhood.

Both poets use the form of dramatic monologue, which is a highly intimate and personal form of poetry that gives the reader a deeper insight into the respective speakers’ childhoods. It could be argued that Duffy’s poem, In Mrs Tilscher’s Class, is even more intimate than Lanarkshire Girls because it uses the second person address, using the pronoun, “you,” which appeals directly to the speaker and invites them to relive their childhood through the poem. Finally, vital to any poem is its structure.

Both Duffy and Lochhead use structure to full effect when writing about childhood. Starting with the stanzas, in In Mrs Tilscher’s Class Duffy uses two octets and two sestets with fairly even line lengths. The slight shortening of the final two stanzas helps capture the speaker’s desire to grow up and leave her childhood behind. Duffy also writes in iambic pentameter, which emphasises the regularity of early childhood. However, the lack of a regular rhyme scheme still allows for a flexible consideration of the speaker’s time at primary school.

On the other hand, in Lanarkshire Girls Lochhead uses a structure that is not quite as regular. She uses free verse, which means her stanzas are of varying lengths and the line lengths are not even. There is no regular meter or rhyme, which allows for a casual and colloquial consideration of the end of childhood and beginning of adolescence. Perhaps the fact that Lanarkshire Girls is not as regular in structure as In Mrs Tilscher’s Class suggests that our lives get more disordered and free as we age and progress through childhood.

Another key aspect of structure to consider is how the poets’ use of diction conveys childhood experiences. Diction refers to their use of both sentence structure and punctuation. Starting with In Mrs Tilscher’s Class, Duffy uses a mixture of long, descriptive sentences as well as short, staccato statements such as, “Sugar paper. Coloured shapes. ” Through this method Duffy captures the variety of pace during childhood, primary school in particular. She also frequently uses enjambment, such as, “Mrs Tilscher smiled / and turned away. The effect of this method is that the lines of the poem flow into each other, creating a sense of time passing as the speaker progresses through her childhood. Lochhead also uses frequent enjambment, such as, “our country bus sped / past the city stops. ” In this case the enjambment helps create a sense of movement and excitement as the girls embark on their journey at the end of their childhood, on the cusp of womanhood. Contrastingly, Lochhead does not use any short, sharp sentences; she prefers longer, listing ones.

Perhaps this is to reflect how we mature with age and are able to appreciate more detail in the world around us in later childhood, compared to the simply understanding we have in primary school. To conclude, both Duffy and Lochhead skilfully write about childhood and the progression into puberty using many methods, the most effective of which I believe is their vivid use of imagery. Both poets create works that resonate with the reader and allow us to re-live our own childhood experiences through the eyes of the speaker. 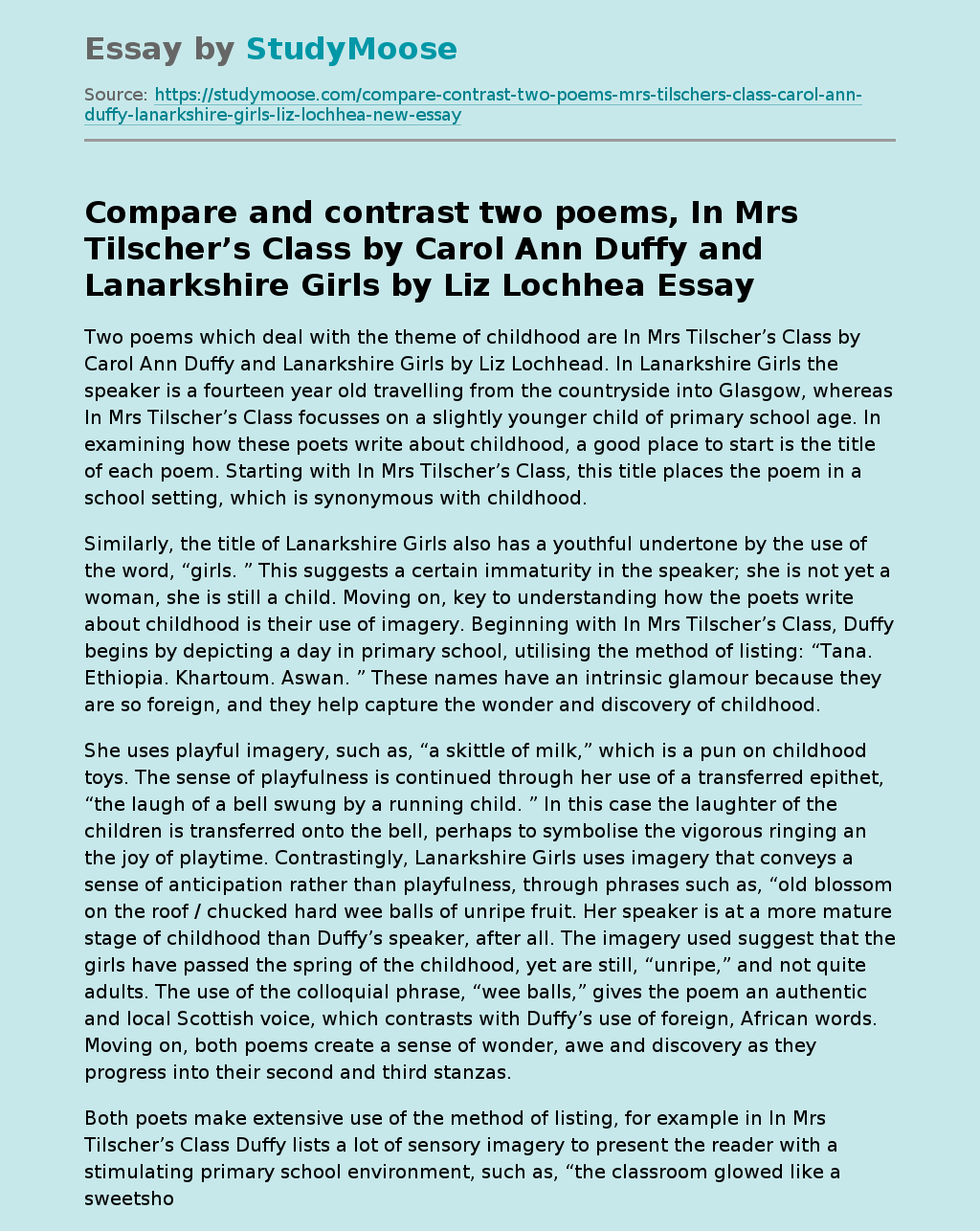