In Mrs Midas, Carol Ann Duffy takes the well-known story of King Midas from Ancient Greek mythology and places it in a modern context from the wife’s perspective. Originally, the story is about King Midas and the power he possesses that turns everything he touches into gold, which leads him to ultimately realise that wealth alone can’t make him happy – even unlimited gold. The moral of the King Midas story is that you can’t buy happiness, and also to be careful what you wish for as greed is sure to overcome you.

Don't use plagiarized sources. Get your custom essay on
“ Close Critical Analysis of Mrs Midas ”
Get custom paper
NEW! smart matching with writer

This is where the present day expression ‘The Midas Touch’ derives from; meaning everything a person does is successful and profitable – as everything in modern society seems to be money orientated. Duffy implies another meaning to the story of King Midas as in ‘Mrs Midas’, Midas is portrayed as the modern day working man who neglects his wife for success and wealth – also reflecting the increasing number of couples having a divorces nowadays.

The underlying theme of the poem is about the husband’s selfishness destroying marriage as men are associated with becoming too involved in work so neglect their wives/families. “He toyed with his spoon, then mine, then with the knives, the forks” the list of objects that he’s turning into gold illustrates the obsession men have with making money out of continuous successes they have; like Midas’ greed it seems addictive as they keep wanting more and more. ‘Toyed’ implies that he’s enjoying it; he enjoys being the alleged ‘money-maker’ so sees no harm in what he’s doing.

It’s a flirtatious reference as if he’s using his male sexuality to get round his wife; this also may reflect how ambitious and prosperous men are perceived as more attractive by women (dependency so ensures security).

Midas’ selfishness is highlighted when his wife describes her dream: “I dreamt I bore his child…” she can only dream of having his children as the reality is she’ll never be able to. It’s ironic how a wife’s ordinary dream of having a child can’t come true when her husband’s senseless dream of turning everything into gold does – Duffy contrasts men’s lust for materialism with women’s needs for simple things such as family. His selfishness is emphasised as because of his foolish actions, his wife won’t be able to accomplish these simple things – he’s already attained many successes it seems yet he’s asking for more. “My dream-milk burned in my breasts” milk that should be there is left unused so is causing her pain as she’s never going to feed this child, there’s also a sense of longing from her unfulfilled aspirations of motherhood. She’s never going to experience having a family (with Midas), which all married couples deserve to do.

Following on from his endless desires, “But who has wishes granted? Him.” displays how no one actually has their wishes come true; only Midas could make this happen. The livid tone in which this is said suggests that he’s always had a greedy nature; the full stop stressing the bluntness of it as if, actually, she’s not so surprised that he was capable of doing such a thing. Her husband didn’t even consider her when he made the wish; he was that selfish he couldn’t stop to think about how this would impact of his wife. Perhaps this is imitating how in reality, men don’t always feel the need to consult their wives before making a decision as they feel in charge – ‘wearing the trousers’ in the relationship means that what they say, goes.

The reader knows that the couple were in love, but Mrs Midas now fears her husband because of his power. “We were passionate then, in those halcyon days” implies that they did love each other, ‘halcyon’ suggesting that it may’ve been exciting young love as it was an early idyllic stage of their relationship; nevertheless they were in love which is now questionable since she’s afraid of him. “Near petrified/now I feared his honeyed embrace” portrays how Midas has subconsciously turned himself into something else – a monster – and as a result his wife is frightened of him and what he could do to her. “Honeyed embrace” sounds comforting – a soothing hug that’ll ensure everything’s alright, but really it means something completely different; it’s this embrace that will turn her into one of his gold pieces – end her life – so now she fears him more than anything.

This poem very much seems to depict men as having dominating power over women. When Midas “sat in that chair like a king on a burnished throne” his status is represented as ‘man of the house’, putting him in light of the original King Midas. “Burnished” proposes that it isn’t any old throne but one polished to perfection, again signifying the lust men have towards a materialistic lifestyle. Mrs Midas feels confused therefore helpless, “what in the name of God is going on? He started to laugh.” displays Midas taking advantage of her ignorance, enjoying the new power he possesses. “Laugh” suggests that he’s pleased with himself and doesn’t really care about the consequences of what he’s done.

Woman being under the influence of male dominance is shown through Mrs Midas’ obedience and ordinary lifestyle. “He asked where was the wine. I poured with a shaking hand” she’s acting the stereotypical wife who stays at home obeying the husband’s orders. The cliché of women being the usual housewife is therefore present as well: “The vegetables cooked/I served up the meal” implies she does the cooking for them on a regular basis, as this is part of her daily routine. This is mirrored by the clear structure of stanzas, indicating the ordinary and boring life she’d had; the structure’s fixed and predictable. The absence of success for the wife also displays how women aren’t expected to work and achieve things for themselves.

However, there is a slight suggestion to women maintaining some sort of power too. The whole aspect of the wife leaving the husband puts women into a different light, proving that Midas doesn’t control everything Mrs Midas does. “So he had to move out”, she’s made the final decision and he listened to her, he also ‘sat in the back’ of car which illustrates his decline in status from sitting on a ‘burnished throne’. She leaves him, “I sold the contents of the house and came down here” indicates that she’s taken a stand and even made money from it; the only achievement it seems that Mrs Midas has attained, is as a result of breaking up with her husband. This emulates how women don’t need to depend on men for success; they are capable of being independent and earning a living for themselves.

Overall, still it seems that males possess overriding power over females. Despite Mrs Midas leaving Midas, it was fundamentally him who caused the marriage to end. She felt incompetent because of his power, so knew it was crucial to get away from him. At the end of the poem Mrs Midas admits that she misses him, revealing he still has a hold on her emotionally. “I miss most, even now…his touch.” implies she misses his humanity and what they would’ve taken for granted before – the physical side to their relationship, and of course with that the love they shared. Perhaps this reflects another negative stereotype of women where they’re seen as being too emotionally attached: Mrs Midas seems to be in love with Midas ‘even now’ – despite everything and him turning into a foolish, greedy ‘monster’. She doesn’t care for the golden ‘Midas touch’ that destroyed their love (which ironically is a positive association), but the true human Midas touch that loved her in return. 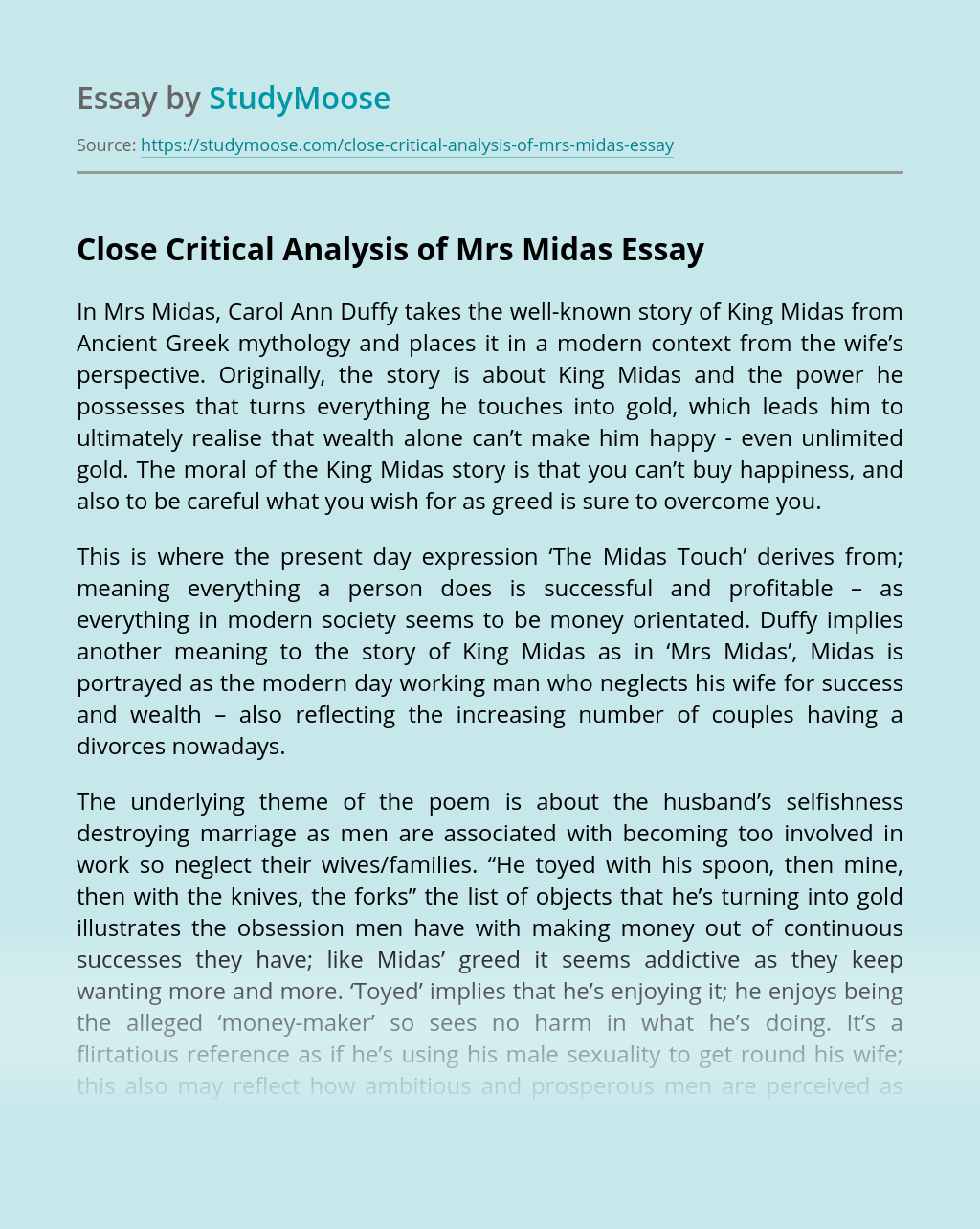