In the poem Litany the memories are presented in the form of a young girl (which could possibly be Carol Ann Duffy, as there is no evidence that it is not) remembering catalogue evening/afternoons her mother used to hold, where the women would look through catalogues, drink tea/coffee, eat tea cakes and gossip. However the women wouldn’t say any embarrassing words aloud (e.g. sex, cancer and affair) instead they would spell them out.

The speaker tells us that no-one could have leukaemia, as the women couldn’t spell the word.

In this poem the young girl remembers and describes the women as artificial, stiff-haired, red smiles, polyester and American Tan stockings (all artificial materials, also hinting that their marriages are artificial) the way the women are described is always in a negative light. Everything in the poem has its place and everything seems to be perfect, except for the ladder running up Mrs Barr’s stocking which is described as “a sly rumour” which shows that something is out of place and would be quite shameful for her.

The title of the poem “Litany” which means chant or prayer that is recited which drones on, which is used to describe the women looking through the catalogue lists the objects they like or wish to purchase. This suggests to us that these meetings have been held before and is done over and over again. The poem shows the power of language how words can silence a room and draw everyone’s attention to a single person, like in the 6th stanza where the child tells her mother and the other wives that “a boy in the playground” told her to “fuck off” this immediately shocks everyone and then her “mothers muted shame”.

She was made to apologise to the other women, however I think the young girl did not say this to shame her mother but wanted to be a part of what they were doing as she was old enough to realise what they were talking about and wanted the attention as a child would.

The poem has six stanzas and enjambment is used a lot as the means of the lines are often carried over. There is a lot of alliteration used to describe the women using b’s and c’s to show the harshness of the women using words such as bristle, bright, biscuits and crackled. The poem also shows how women were stereotyped and also that they could only do certain things as that is what it was like in those days, the women were expected to get married and give up there jobs, so these afternoons were all they could do its like as if after marriage they were put into a box. This poem is also about children rebelling against their parents.

In the poem “Stafford Afternoons” the memories are presented in the form of a young girl again, also again the speaker could be Carol Ann Duffy although it is very unlikely as she has never married. The young girl remembers moving away from her home and going to live in Stafford, when she is living there she is the outsider with a funny accent that no one really wants to be friends with or play with. She tries to amuse herself by waving to cars on the bridge.

She remembers a “strange” boy throwing a stone at her which shows how much of an outsider she is and also that she thinks these people are strange and aren’t like her, and also an omen that things just aren’t right. However she then remembers going into a wood she wasn’t supposed to “The green silence gulped once and swallowed me whole.” tells us how quiet it is compared to the noisy street with children, she’s alone now where no one can see her she is feeling threatened by the silence and the seemingly empty wood. Carol Ann Duffy describes the trees as having sly faces, sticky breath and gathering saliva ready to spit at her, this is the one of foulest things that could be done to a person; it is degrading and disgusting to be spat on, personifying the woods into a horrible, frightening person.

All this is like an omen, like she is preparing us for the horrible things to come; it’s a different way to describe nature as it is usually peaceful and unthreatening. Then Carol Ann Duffy gives us the two words “Too late” immediately we now something awful is about to happen and then “touch” She meets a man stood exposing himself asking her to masturbate him , Carol Ann Duffy describes the man’s penis as a living purple root again using nature as a threatening and frightening thing. This shock brings sound back into her world, with that realisation of the danger she is in and where she is and she runs all the way home ignoring the mans “endearments” on the way managing to escape.

The speaker of the poem then tells us that time is like a ball falling from the sky this suggest that her innocence has been taken from her too soon and has been made to grow up to fast and that time was waiting to shatter her innocence and will be waiting for others too. The trust this child put in adults has been ripped away, how could she ever trust anyone ever again? This poem is the harsh realisation that not everyone can be trusted and that these things do happen.

The title “Stafford Afternoons” suggest that even though the poem is based on one afternoon this incident could have happened anywhere at any time. The poem is very innocent in the first three stanzas a young girl tying her laces, waving at cars from a bridge, playing with a horse, inventing adventures and knowingly going somewhere she’s not supposed to just for the fun of it. Carol Ann Duffy uses a lot of colours in this poem she goes from a calm unthreatening green to a dangerous and violent red, showing the progress of the atmosphere in the poem. She using a falling ball to describe how fast innocence can be snatched away from a child making them change and become a different person.

The poem has six stanzas and each stanza has four lines. In the first three stanzas most words used are plain and dull showing how time is dragging on put how people are moving so fast and then when she enters the woods it is as though time itself has stopped completely until the man says “touch” and then time starts up again moving faster than ever. Also a lot of contrast is used such as light and dark, the streets and the woods and the child like innocence to the harsh reality of the world.

Both poems deal with memories of young children, children’s innocence, people changing and children rebelling. In both poems both children are outsiders in a way as in the first the child isn’t in the conversation with the adults and in the second the child isn’t involved with any of the other children, also both poems show realisation of the fact they have done something wrong, also at the beginning of each poem time and life seems to be dragging on and then speeds up suddenly towards the ends of the poems. Also the theme of things not being just right is in both of the poems the women’s stockings in the first and the sudden silence and harshness of the woods in the second, also the silence of the wood an the silence of the mother both show how frightening that type of atmosphere can be. The wood in the second poem reminds me of the women in the first poem both being sly and artificial.

In conclusion both poems present memories in the form of speakers in these cases young girls telling us about a certain memory, both these poems are in the section entitled “Mean Time” by Carol Ann Duffy this suggest and is shown in both poems that time is harsh and is always waiting for us, it slow downs speeds up or just stop completely. 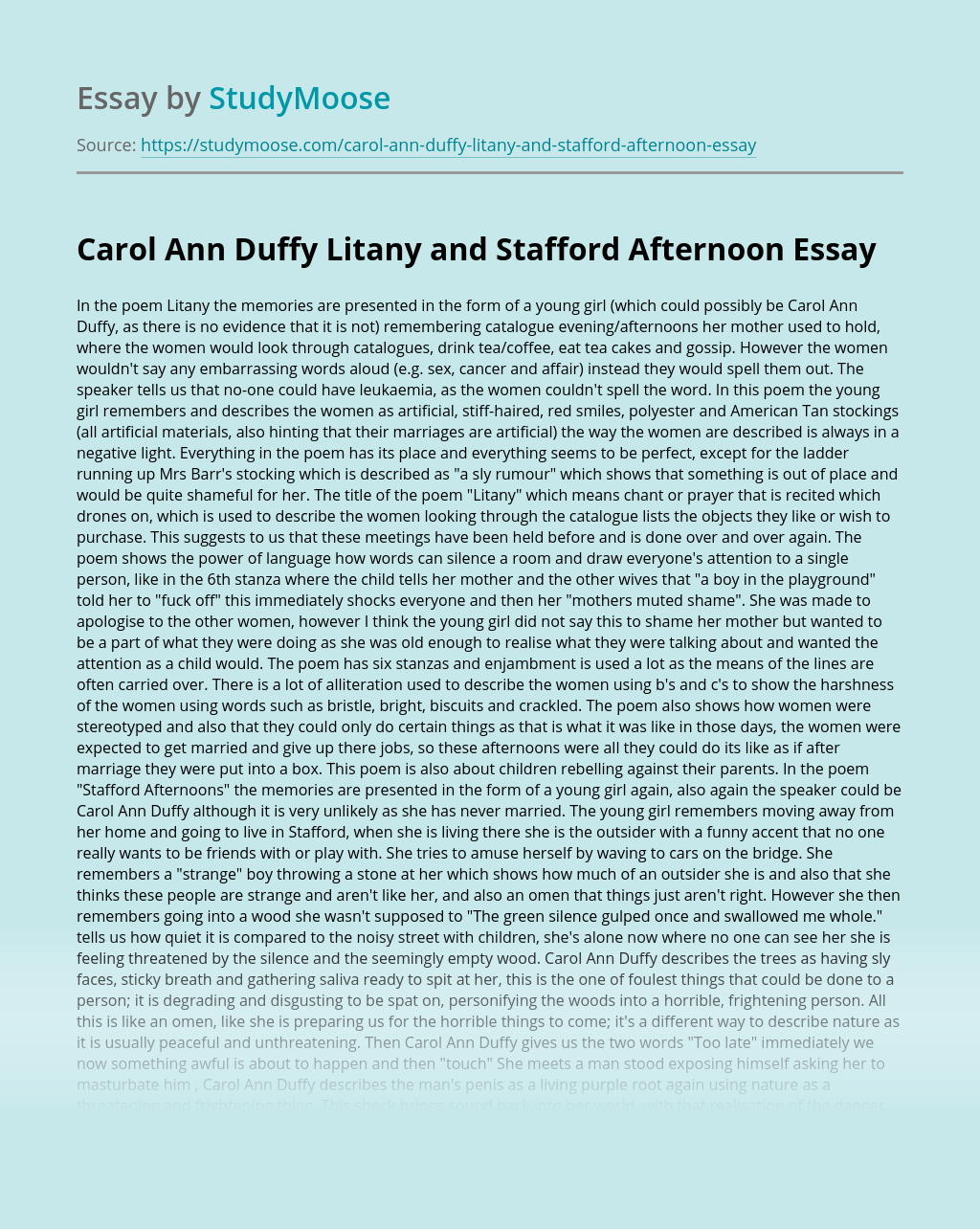