“Shooting Stars” is a horrific and moving poem written by Carol Ann Duffy. She adopts the persona of a female Jew speaking out from beyond the grave about her terrifying ordeal before she died in the Holocaust. A powerful impression is left on the reader after reading Duffy’s dramatic monologue and visual descriptions of her ordeal and immense suffering. She urges the reader to remember what the Jewish victims were forced to go through, and begs us not to turn our back and forget.

The adopted persona of a female Jew leaves us with a powerful impression of how horrific and brutal times were during the Holocaust based on her personal experience and suffering. ————————————————- ————————————————- “After I no longer speak they break our fingers/ to salvage my wedding ring” ————————————————- This illustrates the sheer lack of compassion and care the soldiers had towards the Jewish people. The words “Break” and “salvage” Shows us how the soldiers violently removed an item of value from the dead without a care.

The impression we’re given is that the soldiers cared more for the valuables and earning a profit, than for human life itself. The wedding ring is a symbol of eternal love and suggests that this woman was obviously married and had a family that were all being affected. The first two lines create a vivid picture of the soldier’s inhumanity towards other human beings, the unthinking, uncaring cruelty with which one race imposes on another. ————————————————- The extreme of the soldiers’ inhumane acts heightens, when in stanza two we learn just how brutally they treated their victims.

————————————————- “One saw I was alive. Loosened/his belt” ————————————————- The enjambment between the words “loosened” and “belt” brings our attention to the horrifying fact that the soldier may have been about to hit her with it, but the following sentence implies something much more disturbing. “My bowels opened in a ragged gape of fear. ” If we use letter inversion for the words “ragged” and “gape” they become “gagged rape”, which portrays another reason the soldier was loosening his belt. He raped the poor woman before she died.

The enjambment used in this sentence could be seen as the passing of time for the woman, and how the realisation of what was about to happen to her, actually happened. Due to the immense suffering, and the amount of sheer terror the woman was forced to feel and go through, she loses control of her body: ————————————————- “My bare feet felt the earth and urine trickled/down my legs until I hear a click. Not yet. A trick…” The soldiers’ have completely degraded the Jewish woman right down to the “untermenschen” (Sub-human) status because of their inhume acts of torture.

They have terrified her so much; she no longer has the control over her own body and therefore soils herself through fear. The overall wickedness of the soldiers is brought to our attention further when the Jewish woman witness’s the death of a young child; “Between the gaps of corpses I could see a child/the soldiers laughed…/they shot her in the eye” ————————————————- This illustrates that the ground was covered in bodies. But the worst part, is that there was a young child standing in the middle of all the dead victims.

The list of names isn’t punctuated, which give us the idea of them losing their individuality and reflects upon the six million lives lost during the Holocaust. The fact Duffy names these people gives them back part of their individuality which the soldiers callously took away, and reminds us that these were real people who all sadly met the same fate. The Jewish woman speaks out further on behalf of the other Jewish victims in the line; ————————————————- “Mourn for the daughters, upright as statues brave. ” ————————————————- ————————————————-

This is her telling us how the other Jews bravely met similar fates and forces the reader to question themselves – Would I be that brave knowing I was about to die? Would I stand “upright as a statue” in the way these Jewish victims did? – This tells us that the people who fell victim to this were both emotionally and mentally strong. ————————————————- ————————————————- The persona comes across as being extremely brave when she is forced to witness the death of someone she knows and cares for; “You would not look at me. You waited for the bullet.

Fell. ” This indicates to us how one small bullet can instantly steal a unique and individual life. She is forced to watch as “Fell. ” Her friend is shot down and killed by the soldiers. The single word sentence puts an emphasis on the sudden death the Jewish woman had to witness. ————————————————- ————————————————- Duffy’s use of repetition in stanza five makes clear the ignorance of the world and highlights how simple and easy it is for people to continue on with their lives when there is all these horrors and atrocities happening in the world.

————————————————- The use of repetition of the word “After” and the use of parallel structure suggests that people just continue on with their lives as normal and don’t seem to be affected by the atrocities in any way. “The world turns in its sleep” makes the reader feel somewhat guilty because we’re not remembering these tragic events in the way we should, and giving it the recognition it deserves. ————————————————- ————————————————-

The fact that young men were “Gossiping and smoking by the graves” shows us the total disrespect they have towards the dead Jewish people as they are just sitting by the graves smoking and talking as if nothing is wrong. ————————————————- ————————————————- Carol Ann Duffy urges us to remember the Jewish victims and the atrocities they faced during the Holocaust. She does this through the use of repetition of the word “Remember” in stanza two;

————————————————- “I say, Remember. Remember these appalling days which make the world forever bad” The repetition of the word “Remember” emphasises to us as a reader just how important it is for us not to forget the events of the Holocaust and the importance of remembering all the Jewish victims. The words “Days” and “Forever” is a paradox which shows us that although the Holocaust only lasted over a short period of time, the effects an memories of it will be forever lasting because there is no erasing what happened.

Throughout the horrific experiences of the concentration camp, the Jewish person manages to hold onto her religion despite the large number of deaths occurring around her, which would make a lot of people question the existence of God. “Tell them I sang the ancient Psalms at dusk/inside the wire as strong men wept” She tells us how her Psalms made “strong men” weep. This illustrates to us how sad and horrific her story is, and that she’ll never let us forget the atrocities that occurred. Her final lines echo the words of the 25th Psalm; ————————————————- ————————————————-

“Turn thee onto mercy, for I am desolate and lost” ————————————————- This is a reference to the Bible’s 25th Psalm and is known as an allusion. It not only reminds the reader that this woman held onto her faith, but it also asks us to forgive our enemies and asks us not to feel ashamed for the things we do wrong throughout life. The Jewish woman is telling us how she is “desolate and lost” which is a sad and reflecting ending which makes her seem lost in the passage of time and somewhat nostalgic. ————————————————- ————————————————-

“Shooting Stars” is a poem about beautiful and unique lives being destroyed, but it doesn’t tell the tales of the glory and winning of war. It tells it to us how it was. It illustrates to us how real and innocent men, women, and children lost their lives during the Holocaust at the hands of the German soldiers and she reminds us constantly how atrocious acts of war are still happening around the world in places such as Iraq and Bosnia. “The world turns in its sleep” as we forget about the terrifying events which happened. Duffy urges us to “Remember” and her haunting words from beyond the grave will never be forgotten. We will never forget. 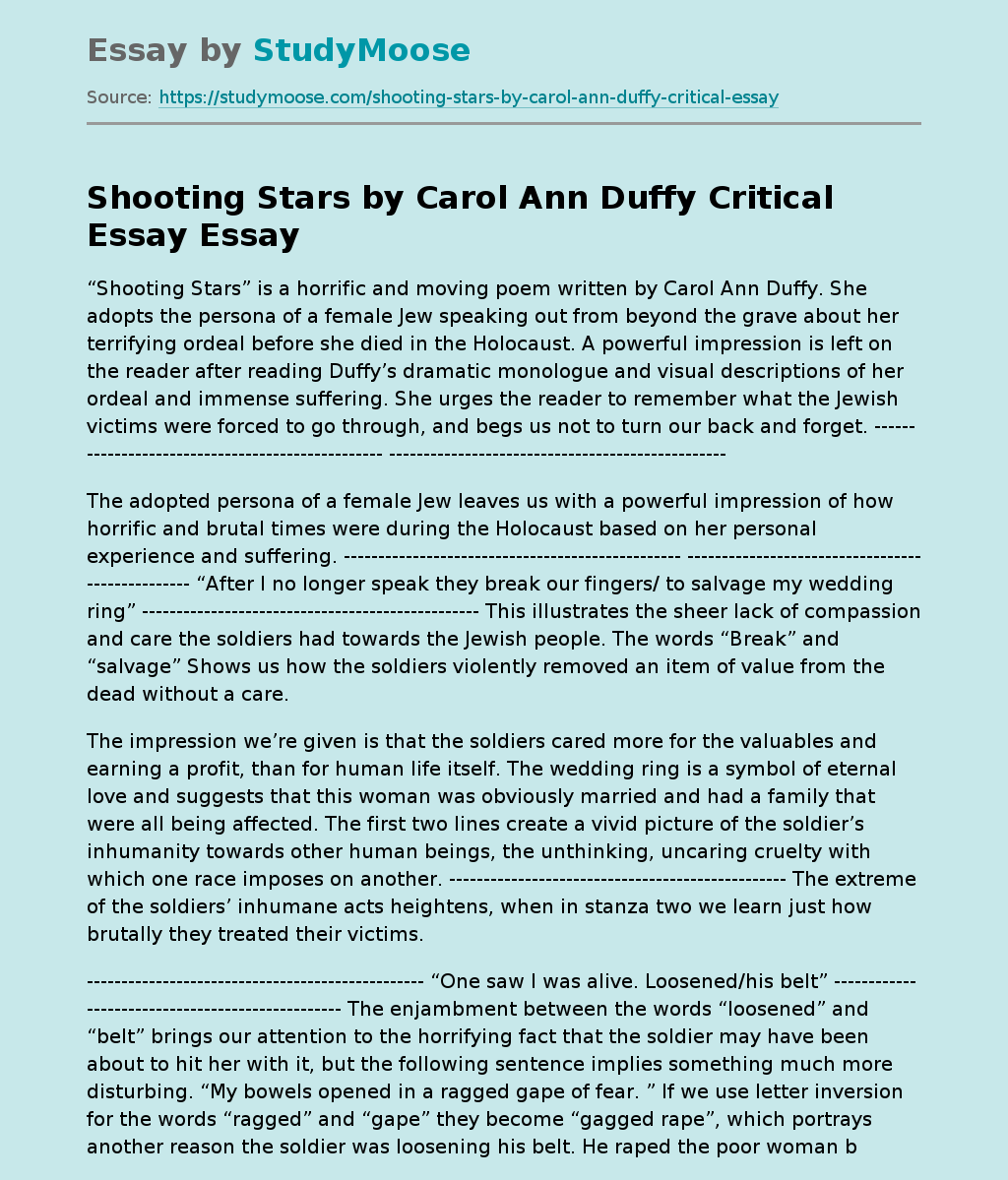