“Shooting Stars,” by Carol Ann Duffy is a poem that explores the theme of tragedy through the writer’s creation of haunting imagery and tells a story, like no other. Using techniques such as imagery, enjambment, structure and form, Duffy invites the reader to contemplate the Jewish victims of the Holocaust in World War II and to warn against the dangers of forgetting such a crime. This poem recounts the horrific ordeal of a dead Jewish woman who was a witness of the crimes of the Holocaust.

Don't use plagiarized sources. Get your custom essay on
“ “Shooting Stars” by Carol Ann Duffy ”
Get custom paper
NEW! smart matching with writer

As she speaks her story from deep down in her heart, she makes the reader aware of the pain and suffering her race endured as well as the courage it took for her and the other six million of her race to say that they were Jewish. The writer conveys the theme of tragedy in a powerful way through the title “Shooting Stars.”

Here Duffy has employed word choice and metaphors to represent the annihilation of outstanding people.

The writer’s uses the word “Shooting” indicates to the reader someone is terminated by a gun shot and “Stars” is a metaphor that symbolising the Jewish people as their symbol is the Star of David. Although it could be argued that the writer chose this title because when a Nazi soldier shot a Jew in head, the bullet would leave a star shaped wound. As a result of this Carol Ann Duffy has, in just two words, skilfully reminded the reader of the magnitude of the persecuted Jews.

The theme of tragedy is further enhanced through the device of form as the poem is written in the form of a dramatic monologue. This is understood in stanza one, line one: “After I no longer speak,” impressively highlights the fact Duffy has adopted the role of a dead Jewish woman telling the reader her horrific story from beyond her terrible mass grave.

The writer has successfully made this woman a heroine as she gives the reader a dramatically devastating but important reminder of these diabolical events. This is reinforced with stanza four, line twelve; “How would you prepare to die,” as the writer is continues to employ the role of the dead Jewish woman. As a consequence, Duffy’s manipulation of a dramatic monologue flawlessly reinforces the reader to think about the trauma the Jews went through. One way the writer continues to present the theme of tragedy is with her clever use of enjambment; this is evident in stanza one, lines two and three, “Rachel Rebecca Ruth Aaron Emmanuel David.” The use of enjambment is effective because by eliminating punctuation the names rattle on just as the soldiers would rattle their names off a list. The utilization of six traditional Jewish names highlights the six million Jewish citizens murdered.

Therefore Duffy’s use of enjambment outlines the ignorance toward the Jews during the Holocaust. Another means of conveying the idea of tragedy is Duffy’s word choice in stanza two, line 6; “You waited for the bullet. Fell.” Here the writer’s single word sentence creates a sudden awareness to how quickly victim died. The word choice conjures up the picture of how one of her fellow prisoners slumped to the ground after being shot by the Nazi solider. Thus Duffy has successfully drawn the reader in by her lexical word choice to illustrate the defencelessness the Jews had over the Nazi soldiers. The most prevalent way the writer introduces the theme is conveyed through imagery and as an illustration; stanza five, line eighteen: “a boy washes his uniform.”

Here Duffy ambiguously uses the word, “boy,” to portray to the reader that some of the soldiers responsible these shocking crimes were no older than schoolboys. Additionally, the word, “washes,” gives the image of the soldiers erasing the memories of the disgraceful crimes they did to innocent people. As a result the writer’s haunting imagery effectively reminds the reader how disgusting the Nazi soldiers were by employing boys to their dirty work for them is utterly unacceptable. In conclusion Carol Ann Duffy has effectively explored the theme of tragedy through the employment of various dramatic techniques. The title encapsulates the theme which is further explored through the poem.

The form reinforces to the reader that the Jews where heroines. Even though the people did not fight their courage still shines through. Enjambment gave the reader and insight to mass numbers tragically murdered by the evil Nazi soldiers. Duffy’s word choice immediately emphasises the atrocity of the Nazis towards the Jews. Finally, Duffy’s powerful imagery further develops the theme of tragedy by awakening the reader to feeling the same torturous pain as the adopted dead woman had tolerated. 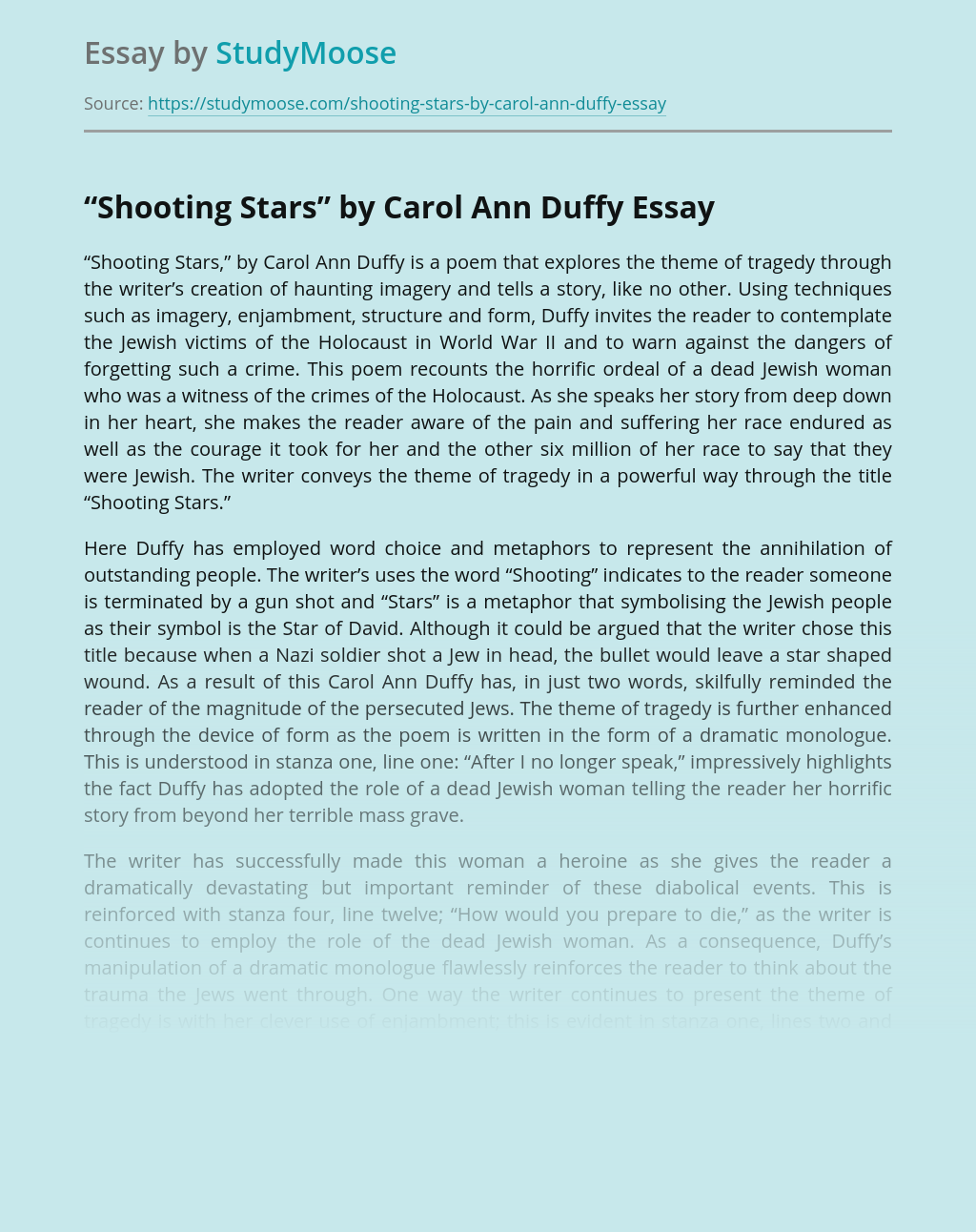