Compare and contrast two poems, Standing Female Nude by Duffy and The Redneck by Liz Lochhead

The title of Standing Female Nude focusses on the woman as an impersonal object, but it also has a certain element of defiance.

Don't use plagiarized sources. Get your custom essay on
“ Compare and contrast two poems, Standing Female Nude by Duffy and The Redneck by Liz Lochhead ”
Get custom paper
NEW! smart matching with writer

Duffy uses the active verb, “standing,” suggesting that this woman refuses to be dominated. Contrastingly the title of The Redneck focusses instead on the man of the poem. A redneck is a derogatory American term for a working-class white person from the southern US, especially a politically reactionary one. This captures her disdain for the man. Perhaps Lochhead’s reasoning for using a foreign word could be to emphasise the distant relationship between the man and woman in this poem.

Moving on, both poems use vivid imagery to capture the complex relationships between men and women. As Duffy said herself: “I like to use simple words but in a complicated way.” The main contrast between the two poems is the identity of the speaker. Duffy uses a French prostitute that is a life model for an artist, whereas Lochhead writes from the point of view of a Scottish woman after the breakdown of her marriage.

What binds these two working class women together is their dysfunctional relationships with men. In Standing Female Nude the reader gets the sense that the woman is being objectified straight away with the triad, “belly nipple arse in the window light.” She is presented like a piece of flesh hung up in a butcher’s window. Similarly, the speaker in The Redneck feels as if she is being objectified based on her appearance: “Six month on the popcorn diet. Starving.” The colloquial language demonstrates that this is an authentic Scottish voice.

Both speakers are unreserved with their criticisms of men. The speaker of The Redneck calls her husband a, “pig,” and uses dialogue to convey how crass he is: “him shouting ‘Perfect Working Order’ … and flashing the photographer.” This pun on the word, “flashing,” is effective in conveying her husband as misogynist and sexually aggressive. The speaker in Standing Female Nude is also viewed sexually by the artist: “There are times he does not concentrate / and stiffens for my warmth.” She responds inwardly by referring to him as, “Little man,” again making a sexual reference. In both cases the attraction is purely one-sided. The relationships presented are dysfunctional and oppressive, although the speaker of Standing Female Nude is also using the man to a certain degree. At times it is hard to tell who is exploiting who.

Another comparison that can be drawn is that both poems use imagery that is sinister and has connotations of violence. In Standing Female Nude Duffy writes, “I shall be represented analytically and hung.” She means her painting will be hung in a gallery but the clever use of enjambment makes it sound as if she is being condemned. Correspondingly, in The Redneck Lochhead writes that the husband has, “a knife stuck down his sock.” Again there is a reasonable explanation for this but the way it is written has an ominous effect on the reader. These references suggest that relationships between men and women condemn the woman to a lifetime of misery and pain.

Both Duffy and Lochhead make reference to the beginning of the poem in the conclusion. In Standing Female Nude the first and last lines both speak about money: “six hours like this for a few francs,” and, “Twelve francs and get my shawl.” The first and last thoughts of the speaker are about money. She is a prostitute; for her the relationship between men and woman is simply a way to make a living. She gets her money, he gets his painting and they part as if their meeting never happened. In a similar fashion Lochhead contrasts her opening simile, “They day I got married I was like a rake,” with the first line of the concluding stanza, “During my marriage I ballooned.” This disparaging self-mockery is effective in presenting the relationship she shared with her husband as something unhealthy and insalubrious.

Furthermore, the tone of the poems aptly reflect the relationships presented. Both poets convey an element of cynicism throughout. An example of this in Standing Female Nude is, “They tell me he’s a genius.” The speaker is obviously sceptical about this claim. Likewise, the speaker in The Redneck mentions, “All so as I could swan down the aisle.” This retrospectively suggests that she was vain and naïve. These cynical sentiments are effective in presenting how relationships between men and women are not as romantic as we like to think. Standing Female Nude reads defiantly up until the final stanza, where there is somewhat of a tonal shift. Duffy writes, “At night I fill myself / with wine and dance around the bars.” This could possibly mean the speaker is carefree and happy, but it is more likely suggestive of profound loneliness and emptiness that the speaker fills with alcohol. The poem finishes with a much more sombre tone.

Finally, a key thing that must be considered when analysing any poem is the form and the poet’s way of structuring. Both Standing Female Nude and The Redneck are first person dramatic monologues, which gives the reader a personal but one-sided view of the relationships between men and women. The main difference between the two is that Standing Female Nude is written in present tense to convey realism, whereas The Redneck is written in a more reflective past tense. One provides us with a real time relationship, the other is a retrospective evaluation of a relationship that has ended.

However, the structure of the two poems is largely similar. Both Duffy and Lochhead break their poems into stanzas but do not use a regular meter or rhyme scheme; they prefer to use free verse. This is effective because it reflects the authenticity of the relationships between men and women presented, in direct contrast to the complicated structure of over-romanticised love poems. These poems could be an attempt to deconstruct the tropes that make up a typical relationship poem. The most effective structuring method that Lochhead utilises in The Redneck is finishing with a tornada (a shorter and isolated concluding stanza). The physical appearance of the poem on the page conveys the breakup the speaker experienced, and it could also represent how destructive relationships can lead to men breaking women.

To conclude, Standing Female Nude by Duffy and The Redneck by Liz Lochhead both present the reader with negative and destructive representations of the relationships between men and women. There is a definite feminist undertone to both texts, particularly Standing Female Nude. Both poets seek to challenge the archaic notion that women must rely on men. In the words of Cheris Kramarae, “Feminism is the radical notion that women are human beings.”

Compare and contrast two poems, Standing Female Nude by Duffy and The Redneck by Liz Lochhead. (2020, Jun 01). Retrieved from http://studymoose.com/compare-contrast-two-poems-standing-female-nude-duffy-redneck-liz-lochhead-new-essay 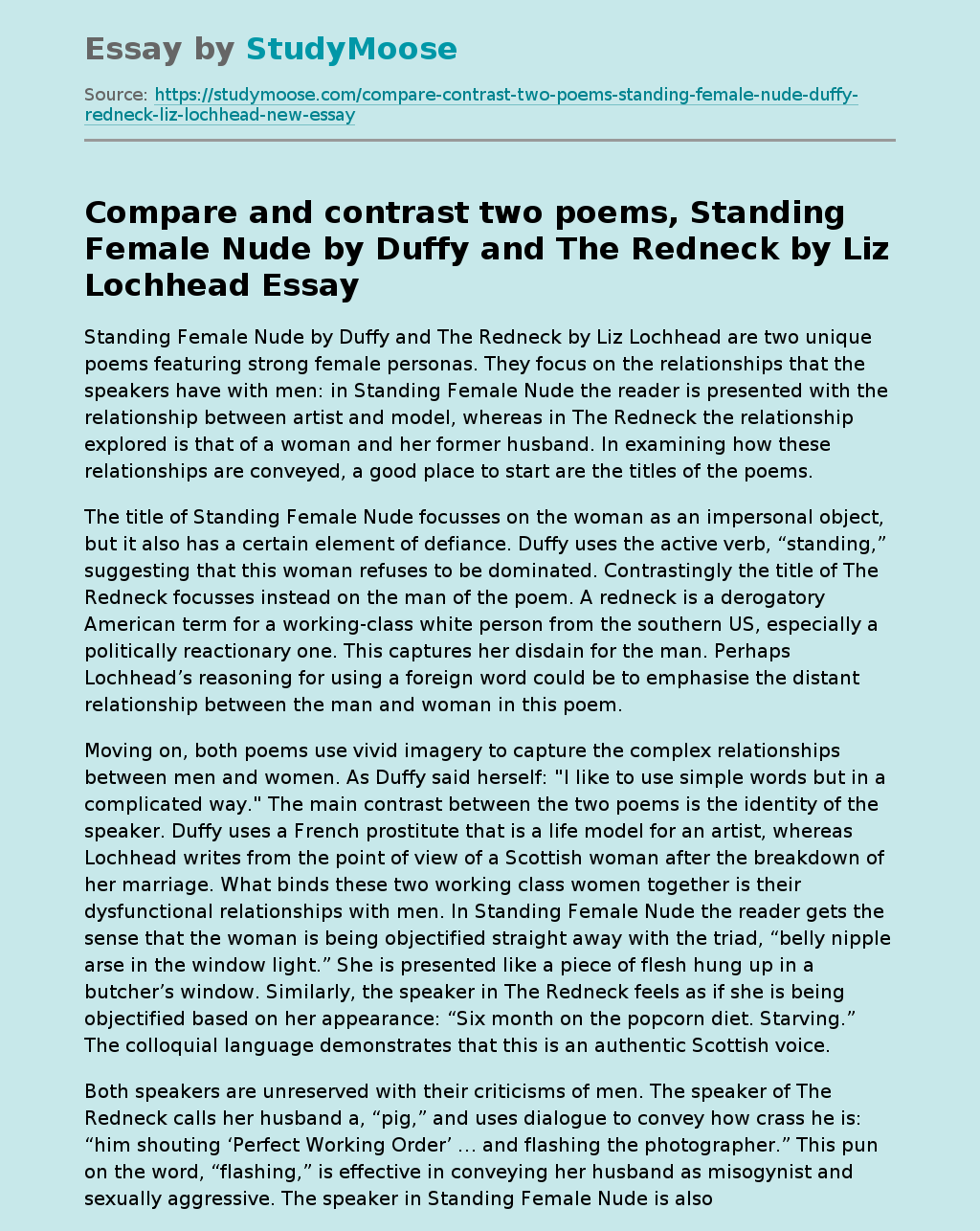