A Comparative Essay Of The Poems ‘Salome’ (C.A.Duffy) and ‘The Arrival Of The Bee Box’ (S.Plath)

‘Salome’ by Carol Ann Duffy and ‘The Arrival Of The Bee Box’ by Sylvia Plath have many similarities and differences. ‘Salome’ is ostensibly a poem about an individual, most likely a woman, who wakes up and finds ‘a head on the pillow’ beside them. The poem continues to detail their immediate actions and finally reveals that this head is in fact ‘on a platter’. ‘The Arrival Of The Bee Box’ appears on the surface to describe the empowerment felt by an individual as they explore their control over a box of bees.

Don't use plagiarized sources. Get your custom essay on
“ A Comparative Essay Of The Poems ‘Salome’ (C.A.Duffy) and ‘The Arrival Of The Bee Box’ (S.Plath) ”
Get custom paper
NEW! smart matching with writer

An interesting similarity is both poets are female. C. A. Duffy was born in Glasgow in 1995 and is the eldest of five children.

Plath was born in 1932 and was born in Boston. If you read the poems from a biographical perspective it is possible to identify certain factors which the poet has included due to their personal circumstances. Personally, I believe that both C. A. Duffy and S. Plath have points to make.

For example, Duffy’s poem could be seen to have many links to the role of woman in society and the power they possess over their male counterparts. This mental attitude, which has filtered through into her poetry, could stem from the fact she is the first women and the first openly gay person to hold the position of Britain’s poet laureate.

Similarly, ‘The Arrival Of The Bee Box’ contains subversive ideas of power and possibly connotations to women taking an untraditional role in society.

In ‘Salome’ the pace, tone, rhythm and structure are all fractured. This is very effective as it reflects the psychological standing of the voice in the poem. The effect is created through the techniques of enjambment and rhetorical questions and these can be observed in the fifth line “what did it matter? “. The line is isolated and this draws the reader’s attention to it.

Alongside this the rhetorical question then compels the reader to think “what did it matter? ”. This emphasises the point to the reader that it does matter and is very important in the given context of the poem. By contrast, ‘The Arrival Of The Bee Box’ is made from six uniform stanzas of five lines. There is little by way of caesura and it therefore differs greatly, in terms of structure at least, from ‘Salome’. Personally, I believe this is because the speaker is portrayed as being more collected and comfortable with the received power, relative to the voice in ‘Salome’.

The second line is an excellent example; “Square as a chair and almost too heavy to lift. ” The rhyme of ‘square’ and ‘chair’ gives a positive sound and in turn this can be seen to signify control and enjoyment of power. The above evidence suggests that C. A. Duffy and S. Plath both have different ideas on which way structurally is best to communicate their ideas. However, I believe the free structure of ‘Salome’ adds more than the rigid structure of ‘The Arrival of The Bee Box’ as it generates an extra dimension in which readers can have more freedom to interpret the desired meaning of the poem themselves.

Integral to both poems is the theme of power and the relation it has with the owner, especially women. The similarity and hegemony is this attack on the stereotypical views that if allowed to stand could drive woman to the periphery of society. In ‘Salome’ the voice is somewhat of a ‘player’ and it is this scopophilic attitude which generates Duffy’s point. In a modern society it is often seen as ‘cool’ or ‘macho’ for a male to sleep with many women. By contrast, if females replicate these actions then they stand a high chance of being bombarded with derogatory terms.

It would appear that S. Plath would chose to focus more on the interest of power. She refers to different times in history (Greek, Slave Trade, Roman). This sets quite a theatrical atmosphere because referring to these superpowers through the ages helps the reader to appreciate the importance of power in our society both in the past, present and future. It highlights the fact that in Duffy’s opinion (and I agree) that it is embedded in humans to seek out power and control others. Overall, both poets have similar themes in their poems but chose to express them in different ways.

A similarity between both poems is that they make allusions to either religious names or different parts of the Bible. C. A. Duffy in ‘Salome’ chooses to use iconic Christian names such as John and Peter. Whereas S. Plath uses the concept of a heaven; “There is the laburnum, its blond colonnades, And the petticoats of the cherry. ” The description of this utopian setting could be linked to the feelings felt by the voice in ‘Salome’ when she/it says ‘I saw my eyes glitter…and ain’t life a bitch’. The voice sounds as though it is satisfied, justice has been done and it has reached a metaphorical destination.

This destination, in my opinion, is that the voice feels like they have somehow reached equality by committing this grotesque act. A large influence in terms of language in both poems is the personal pronoun ‘I’. This similarity is most likely due to the recurring them of power in each poem. The narrators are trying to express that they are the ones in charge. The language in both poems is very simplistic but the words can be used in quite complex ways. Both poets have chosen not to overcomplicate their language and I think they have made their poems very accessible to all people.

Colours are used in both poems for different effects. In ‘Salome’ the ‘red sheets’ could signify the anger felt by the voice for the injustices that have driven them to undertake the atrocity. In ‘The Arrival Of The Bee Box’ ‘the petticoats of the cherry’ and the ‘blond colonnades’ are used as the colours of the heaven. The use of colours is different in each poem but both work well. In conclusion, I feel that Carol Ann Duffy and Sylvia Plath are both very successful in presenting their ideas in the two poems.

The poems are left open to interpretation and depending on the type of reading you undertake (colonial, biographical, etc) they can mean different things to different people. However, I personally feel that ‘Salome’ is more interesting and mesmerising to the reader. This is most likely due to the fact I found ‘The Arrival Of The Bee Box’ too abstract for me and I found it difficult to grasp. I think the poems have opened my eyes not only to the inequalities felt by certain groups of society but also to the disparities across the globe in general.

A Comparative Essay Of The Poems ‘Salome’ (C.A.Duffy) and ‘The Arrival Of The Bee Box’ (S.Plath). (2016, Sep 09). Retrieved from https://studymoose.com/a-comparative-essay-of-the-poems-salome-c-a-duffy-and-the-arrival-of-the-bee-box-s-plath-essay 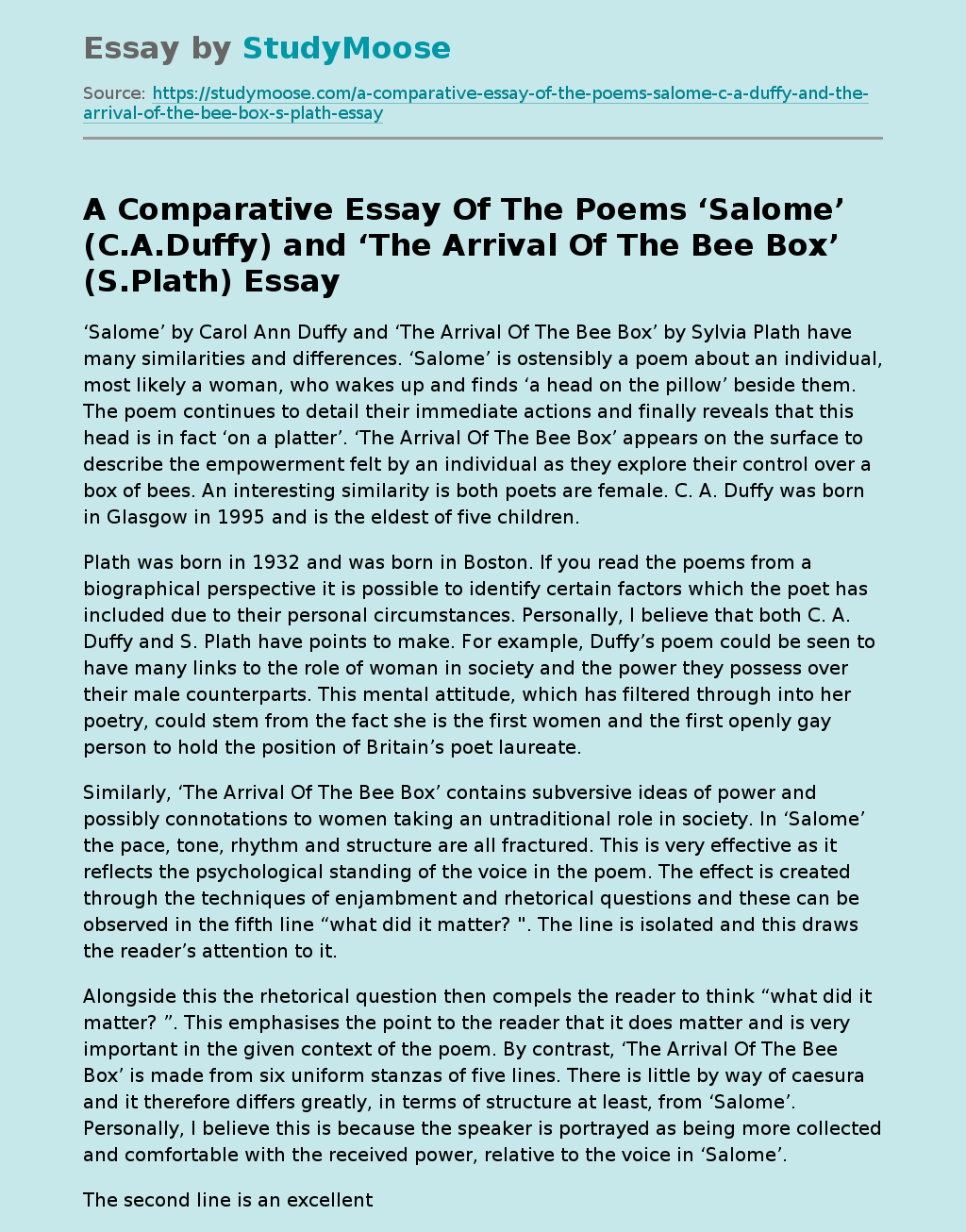