Plath’s arrival of the Bee Box is a poem which depicts a box containing bees. In regards to this theme, it is not the only poem that Plath has approached bees as she wrote The Beekeeper’s Daughter. Additionally this poem can also be seen as a classical allusion to Pandora’s box as it concerns a feared object, which may cause destruction if opened. At first this box is looked upon with distrust, and possibly fear, as there is a lack of control of the contents of this box.

Don't use plagiarized sources. Get your custom essay on
“ Symbolism in The Arrival of the Bee Box ”
Get custom paper
NEW! smart matching with writer

However the speaker gradually rears itself to gain control or at least power in regards to the box and feels more confident about approaching it.

Initially there is a sense of uncertainty about the nature of the box. It is first said to be a “clean wood box/square as a chair and almost too heavy to lift” (1-2). This is a clear and objective description of the box however a contradicting depiction of the box follows: it is said to be the “coffin of a midget/or a square baby” (3-4).

These are images of distortion with references to death, which can leave a somewhat disturbing image of the box. This misshape is also found on the final line of the introductory stanza as Plath describes it as having “not such a din in it” (5), yet in the midst of claiming silence Plath introduces an assonance(“in”) giving the sentence an acoustic trait.

This sense of uncertainty is quickly replaced by fear as Plath now becomes concerned with the box’s basic attributes, such as it being “locked” and “dangerous” (6).

As such it allows her to introduce the theme of control; the speaker has indeed “ordered this” (1) box yet the box, once delivered, is considered unapproachable and to be a burden (“I have to live with it overnight” -7). As such the lack of control becomes clear and it may even be said that it is the box that has started taking ownership of the speaker. And this ownership is in the form of fascination, the speaker cannot stop from exploring the box (“There are no windows, so I can’t see what is in there” -9) despite the reasons not to do so.

Overwhelmed by fascination, the speaker “puts her eye to the grid”(11). This reveals a box with reminiscent themes of African slavery. For example the speaker has “the swarmy feeling of African hands” (13). In addition to this there are references to slave trade (“shrunk for export”-14) and the theme of dislike of captivity is conveyed by placing the consonance of an “ll” sound in the last line: “black on black, angrily clambering”. This resonates the bees (and the slaves) want to escape their prison.

Later on we also find this same assonance associated to unpleasant noise (“It is the noise that appalls me most of all,/The unintelligible syllables.”17-18). Also the use of assonance (“dark, dark”-12; “black on black”-15) achieves a similar effect and sustains this unease. The reference of slavery may be related to the Civil Rights movement in America in the 1960’s and it would be Plath’s way of conveying the cries for equality. Most important however are the threatening nature of these complaints which draw back into the theme of control and underline that the speaker still does not feel safe in regards to the box and its contents, especially as the content is alive and fervent.

The speaker then ponders as to how to let the bees escape (16). However such a choice is not made as the threat of the bees build up. Firstly a buzzing sibilance,”It is the noise that appals me most of all” (17), echoes the presence of the bees but it also provokes confusion, destabilizing the speaker who becomes confused in regards to what the bees are trying to communicate with him (“The unintelligible syllables”-18). This lack of understanding can be understood as the bees are now even more threatening, they are now a “Roman mob” (19), a symbol of rebellion. In spite of the individual bee being harmless, it is the bee’s nature as a swarm that impresses the speaker: “Small, taken one by one, but my god, together!”(20).

The next stanza provides the first hints that the speaker is finally in control of the situation. Firstly, the speaker “lay[s his] ear to furious Latin” conveying the need to understand the bees, something not previously achieved. But to be properly able to understand them, the speaker discards all the Roman associations, which could be a symbol of power over the speaker. This is done by declaring “I am not a Caesar” (22). However this statement is ambiguous in the sense that it contains a paradox as the speaker both mentions power, when the need for power is obvious, and yet denies wanting or having it. Regardless of this, the speaker does finally gain power over the bees. Such is achieved by the speaker announcing that “I have simply ordered a box of maniacs.”(23).

Not only does the speaker finally settle as to what the box is (having previously been uncertain about it), but the concept of power grasp resonates by the use of “simply”, allowing to set aside any previous problems about this box and imposing the speakers interpretation on it. This leads to multiple statements about what the speaker can do with this newly realized power such as: “They can be sent back./They can die”(24-25). This leads to the culmination of this stanza with triumphant, yet dispassionate, assertion “I am the owner” (25). This statement chimes throughout this stanza due to the anaphora of “I” serving as a reminder of who is now in charge. Additionally the short and concise sentences present throughout this stanza act as orders, another way of displaying authority.

This newly gained authority is enjoyed as the speaker now settles and starts musing about the bees:”I wonder how hungry they are” (26). Again we find an anaphora, but this time it is “I wonder” (26-27), which is one of the first clear clues for choice as they introduce hypothetical statements which rely on will to be realised. Following this Plath makes another of her classical allusions, this one being the Greek myth of Daphne. This allusion is done to represent the extent to which the speaker, relishing the newly unveiled power, is now dreaming about what could be achieved with the bees, as now an extra touch of magical realism is added to the poem. In this trail of thoughts, the speaker refers to the ability to transform into a blond tree, the colour of honey, so as to appease the bees.

The speaker also hopes to be ignored by the bees, dressed in a “moon suit and a funeral veil” (32). In this statement we can interpret the moon suit to be the usual beekeeper’s suit, but more importantly the moon suit gives an imposing, and possibly bizarre, image of the speaker. Additionally we find again a reference to death sustaining the dark aspect of the poem. The specific reference to a funeral may imply that the speaker is now mourning over the chase for power with the bees. Irrespective of this, the speaker ceases day-dreaming and instead rationalizes that “I am no source of honey/So why should they turn on me?” (33-34). This provides a justification for setting the bees free without the fear of being attacked. In doing so the reader claims to be “sweet God”(35), which links back to the references of “I am not a Caesar”(22). Indeed both these statements refer to power, but both also display a nuance in regards to the kind of power that should be gained; there is an attempt at the distinction between a tyrant and the image of a kind and respected leader,

“The box is only temporary” (36). Such ends the poem. One of its first roles is to create a couplet with the “free “of the previous line. However this conclusive line also serves as a way of declaring that perhaps choice is finally in the speaker’s hands. However the statement does not give the speaker the choice not to open up the box, which is after all what the bees and later on the speaker want. As such Plath ends the poem ambiguously by not being clear as to whether or not there has been a definite success.

Throughout this poem, Plath has dealt with the struggle for control with the bees. At first she panics but then manages to calm down and make a rational decision about what should be done. Panics and confusion are often caused by the bee’s buzzing which may allow us to suggest that she uses bees as a metaphor for scary thoughts, a kind of paranoia. Indeed the buzzing sound that reverbs would be an easy way to drive someone mad and thus paranoia is a good candidate for this metaphor. In fact, the bees having been ordered by the speaker, presumably Plath, we can say that Plath is dealing with a personal dilemma. This would be reminiscent of Plath’s life by 1960, wherein she had multiple cases of trauma and was in a state of mental decline. It can then be concluded that Arrival of the Bee Box is indeed confessional poetry.

Symbolism in The Arrival of the Bee Box. (2017, Nov 12). Retrieved from https://studymoose.com/symbolism-in-the-arrival-of-the-bee-box-essay 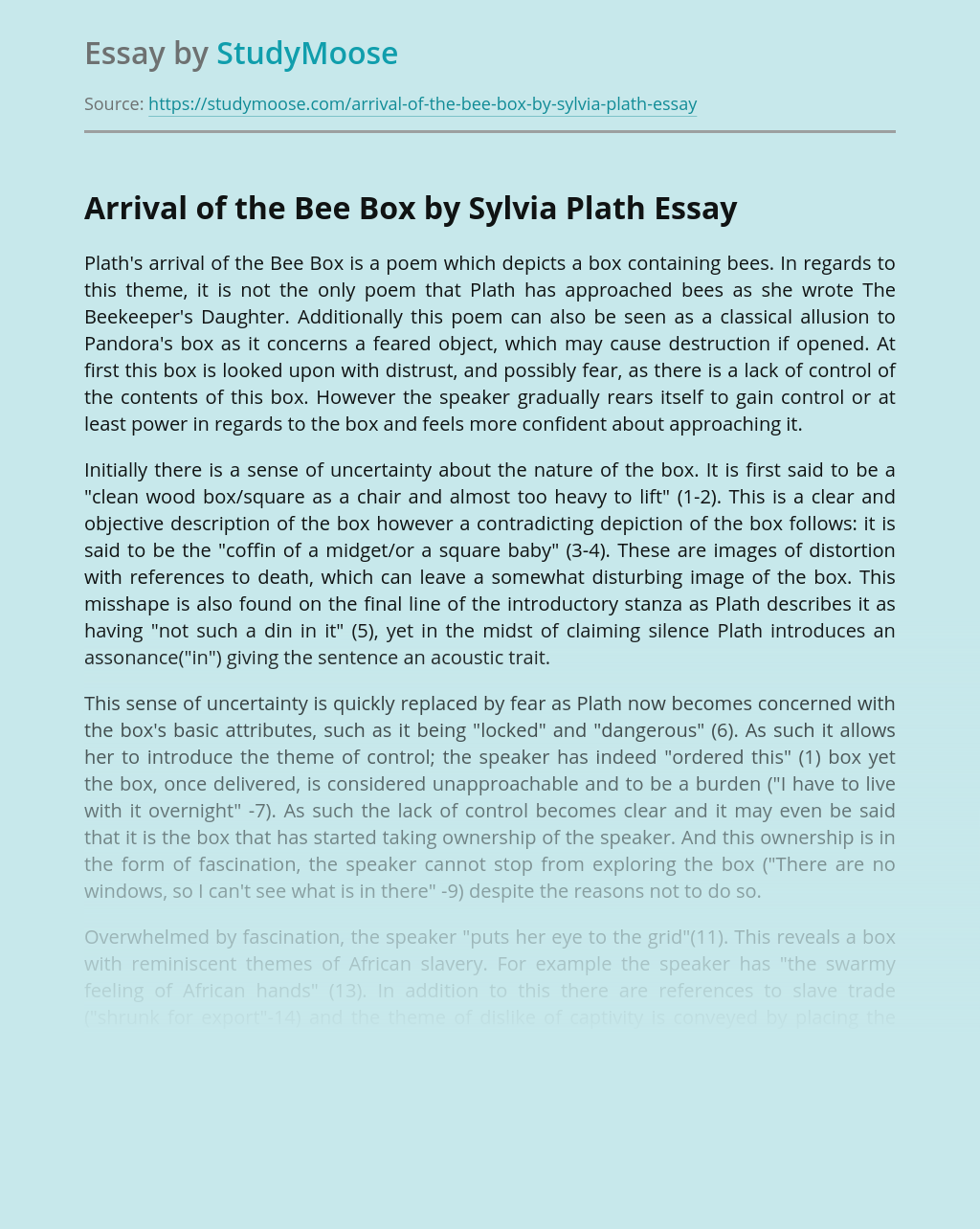