On His Arrival at the Age of Twenty- Three Poem Analysis

On his arrival at the age of twenty-three, written by John Milton was created during the puritan period. John Milton was born in cheapside, London, in 1608, he grew up in a wealthy family that gave Milton all the opportunity’s to be well educated and attend Cambridge University one of the most highly decorated schools in Europe and the World. Milton grew up during the puritan age, literature during the puritan age shows the effects of social and religious conflicts, these thoughts effect how Milton wrote poetry and in this poem he reflects on his religious beliefs.

Don’t waste time
Get a verified expert to help you with On His Arrival at the Age of Twenty- Three Poem Analysis
Hire verified expert
$35.80 for a 2-page paper

At the age of 43 Milton was completely blind which affected his writing after that period, although he wrote this poem before that time allowing a different view of the world and religion. One thing to understand about Milton’s sonnets is their topical range was that he was not a writer of love sonnets. Milton writes political sonnets, occasional sonnets, elegiac sonnets, and sonnets of personal meditation, like this one.

The result of the puritan period was a loss of freedom, severe persecution for all and a decline in literary progress (Hodson, February, 2013).

On his arrival at the age of twenty-three was most likely written in 1632 at a crucial time in Milton’s life, just after his graduation from Cambridge. Milton here acknowledges that he may not seem as mature as some of his contemporaries but expresses a desire to use his talents well and his trust in God’s will for him over time.

On his arrival at the age of twenty-three comments on how a man’s life has gone by, what he’s done and achieved and what role God plays into the life of humanity.

The poem shows the concerns that Milton had about his career when he was young and still hadn’t chosen his own way in life. In this famous work of his we don’t see a celebration of a birthday but a problem that the young gentleman faces as time passes by. The author uses many metaphors and symbols in order to give a more vivid image of his problem, and at the end he gives a solution to this problem. In fact, this problem is relevant even today, when young people have to decide on a career.

Also as time goes by people ask them more often what they have done in their life. Milton places a tone of despair and hope all into one poem, he’s aware he hasn’t done anything worthwhile in his life yet but believes God has still given him time to, the theme of the novel is that time goes quickly and if you leave your time in to the hands of God he will be on the right path in life, but also the crisis of faith and putting your life into Gods hands. Grant-3 Grant-3

Milton worries that time has passed too quickly. He has been at Cambridge studying, but has had little time to fulfill what he sees as his destiny. Milton is aware he is a talented poet, but instead of writing poetry, he has been studying. This precipitates a crisis of faith for the poet, who worries he has wasted precious time. But maybe the poet’s talent, which “be it less or more,” (Milton line 9) will be less when he is mature. He worries, although he is still confident of his future.

About fifty years after Milton’s death, however, this poem was named “On His Having Arrived at the Age of Twenty-Three. ” This title was immediately popular and has endured the time since his death, even if some scholars of Milton wonder whether in saying that “Time” has “Stolen” his “three-and-twentieth year” Milton is actually saying that he is commemorating in this poem his twenty-fourth and not his twenty-third. (Poetry for Students, ©2013 Gale Cengage). Milton wrote in a Sonnet that had an a,b,b,a c,d,d,c rhyme style.

The Petrarchan Sonnet was used during this time period, a Petrarchan sonnet into two distinct parts: the octave (the first eight lines) and the sestet (the last six lines). The octave usually poses a problem, depicts a situation, or offers an observation. The sestet usually provides a resolution of the problem or brings the matter to a conclusion. This sets up the poem for a problem proposed and a solution to solve everything (Hodson, February, 2013) Milton uses the structure to his advantage and his poses the problem of asting his time or “ But my late spring no bud or blossom shew’th” (Milton line 4) and having no achievements yet. To the solution that “ Toward which Time leads me, and the will of Heaven” God will lead him to what right and how he should live his life and use his talents to please God and get into heaven. In on his arrival at the age of twenty-three Milton is both the writer behind the poem and the speaker of it. This shows the poem is about him and his experience with time.

Grant-4 Grant-4 The though development throughout the poem is very intriguing and uses careful diction and metaphors to get his point across. In the first and second lines “How soon hath Time, the subtle thief of youth, Stolen on his wing my three-and-twentieth year! ” (Milton 1,2). Milton personifies Time meaning Father Time that steal your youth then he uses a metaphor of a bird to represent time after and how Father time stole his Twenty-three years of youth.

Just like someone stealing an object, the job is done quick and goes unnoticed till a later time just like time creeps up on all of us. Milton goes on to say he hasn’t been able to have any achievements yet. Next Milton says “ Perhaps my semblance might deceive the truth, that I to mandhood am arrived so near; and inward ripeness doth much less appear” (Milton 4,5,6). The poet remarks that he does not seem as old as he is and the truth that he is practically a man. Inward ripeness continues the natural metaphor of bud and Grant-5 Grant-5 lossom in line 4; the poet has more maturity or ripeness inside than he shows outside, although others are “ more timely-happy spirits endu’th” (Milton 8) meaning that they are happy being there age. This is where the shift from Octave to sestet occurs. He has stated the problem that live has gone by so fast he hasn’t been able to get an achievements and how he’s matured more then anyone else. Allowing for a depressing tone by using words like stolen, no bud, deceive and a late spring to perceive that his time and talents have been completely waster so far.

Where the octave found dissonance between his inner and outward states of maturity, the sestet’s answer is that time and the will of heaven will even things out according to plan. The sestet and solution begins with him realizing that weather he achieves something in his life now or later it will still be measured in the strictest even (Milton 11). Noting the multiple puns used by Milton in this line: “measure” could mean a musical measure or a line of verse; “even” may be an adjective modifying “measure” or may lead the reader into the next line, “even to that same lot. Milton often places adjectives both before and after nouns, and he likewise often lets the word at the end of a line work in two different ways in each line (encyclopedia. com). Regardless of how much maturity there is he is being judged equally to everyone else. The final three lines tell the audience that Milton will let God lead him to where ever he wants him to be and leaves his decision to God or the “taskmaster”. “Time leads me, and the will of Heaven” (Milton 12) Father time lets life go on and Milton will follow the will of the heavens.

Milton then goes on and ends the poem by saying “I have grace to use… in my great Taskmaster’s eye” (Milton, 11,12). Just like God chose Milton’s talents so will his destiny be chosen. Grant-6 Grant-6 The theme Milton developed throughout the poem was one of time going by quickly and the crisis of faith, the hard decision of putting all of it in God, although this would be easy for Milton to do back in the times of the puritans because that is what they believed in, although this day and age is would be a lot different.

That’s the tremendous part of this poem, its applicable to every day society and life, we can use it to learn and be better. The crisis created by Milton’s awareness of the passage of time is one that can be resolved by the poet’s choice to put his future in God’s hands. In the first eight lines of the poem, Milton worries that time has passed too quickly. He has been at Cambridge studying, but has had little time to fulfill what he sees as his destiny. Milton is aware he is a talented poet, but instead of writing poetry, he has been studying.

This precipitates a crisis of faith for the poet, who worries he has wasted precious time. Although he soon realizes God will lead him in the correct path with time and he can use his talent of poetry to the best of his ability. Milton used a cunning way and the sonnet format to produce a poem that can be read and studied throughout the ages and still be applicable to that day. Religion and the crisis of faith will always be a hot topic and its up to personal opinion to figure out which one you should choose.

Milton and his puritan views allowed him to pick God easily although someone like Robert Herrick a cavalier in his days, would choose a carefree life so they live while they can now, “times, still succeed the former” (Herrick, To the Virgins, to make much of time, line 12). Throughout the poem Milton uses nature imagery for metaphors and produces and affective tone of despair and hope between the octave and sestet, also putting a theme of the how time passes very quickly and the crisis of faith.

On His Arrival at the Age of Twenty- Three Poem Analysis. (2016, Sep 14). Retrieved from http://studymoose.com/on-his-arrival-at-the-age-of-twenty-three-poem-analysis-essay 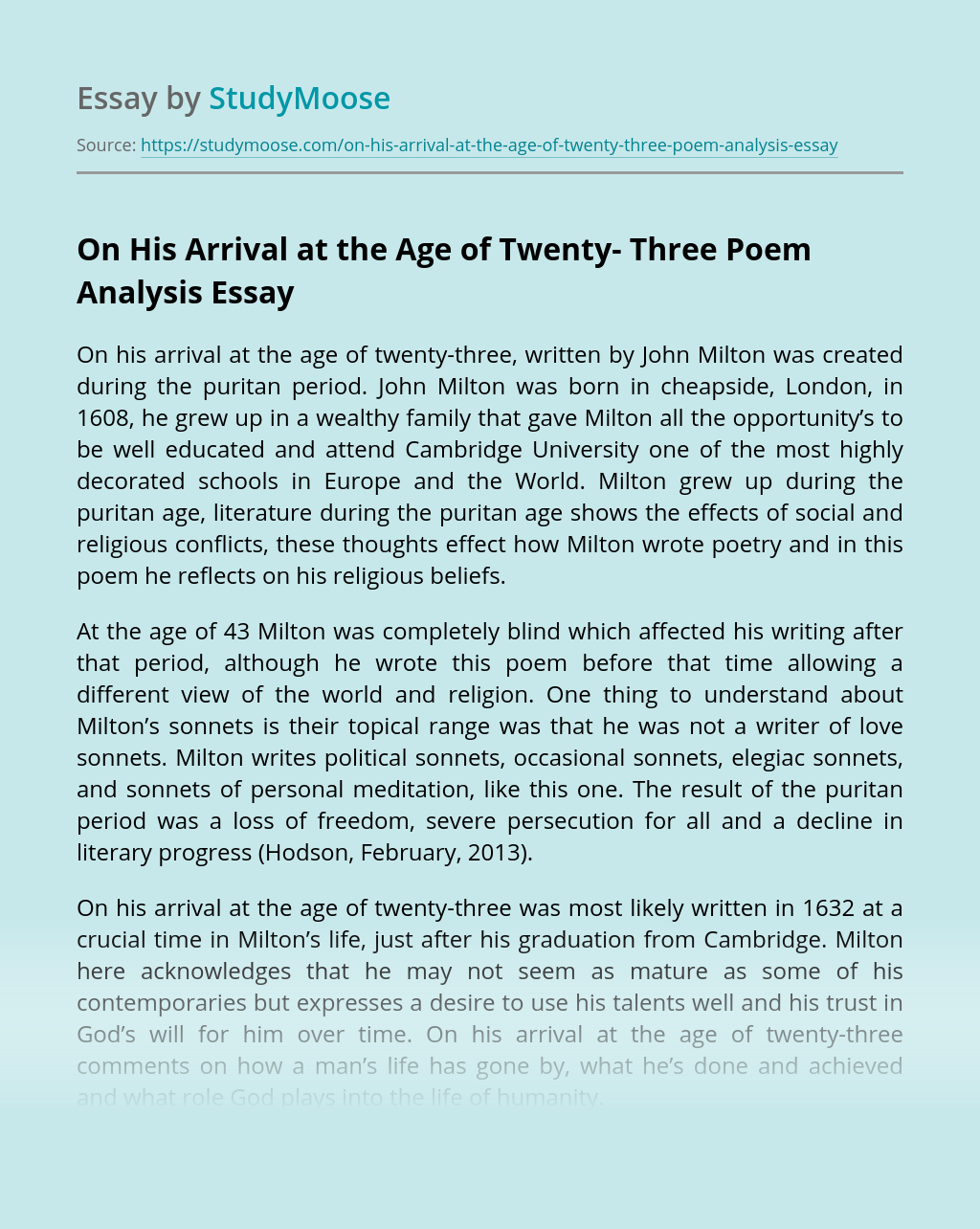 Don’t waste time
Get a verified expert to help you with On His Arrival at the Age of Twenty- Three Poem Analysis
Hire verified expert
$35.80 for a 2-page paper
Stay Safe, Stay Original