“After twenty years” by O. Henry

The short story “After twenty years” is a classical story written by O. Henry. The story is about the two characters that were actually best of friends. They grew up in New York until lost sight of each other. One of them leave the place and tried to live in West to make easy money, thus he ended up being a criminal in Chicago while the other man felt that his place in his hometown is better and he ended up as a policeman.

Don't use plagiarized sources. Get your custom essay on
“ “After twenty years” by O. Henry ”
Get custom paper
NEW! smart matching with writer

The two friends made a promise that after twenty years both of them will meet again at the same restaurant for the purpose of knowing each achievements that they have done after those years. those years. The story began at the specific place of their appointed place and time. It is nearly 10 o’clock at night and really dark out there. A policeman making his rounds, rattling door knobs to make sure everything is secure on his beat.

In the doorway of a hardware store that is closed, he comes across a man who has an unlit cigar in his mouth. Before the officer can begin to question him, the man assures him that he is not a burglar that he is merely waiting for a friend. He goes on to light his cigar and tell the officer why he and his friend are meeting at such a dark and desolate place. The man, who is Bob, told him that he was waiting for a friend he has not seen for twenty years.

Years before he and his friend had agreed to meet at the very spot to discuss how their life had turned out.

The man keeps on telling to the policeman how his life turned out good that he actually became rich and successful. Talking about his best friend, he told the policeman that Jimmy will never fail to appear in their agreement for he has been a constant good companion. After saying all these to the policeman, the latter dismisses himself. Twenty minutes after the policeman left, another man went to greet his friend Bob. Both of them cheered and make themselves comfortable with each other as they try to unleash the gap on their acquaintance. Shortly, as they approach the front door of the drug store, Bob realizes that this man is not his old friend Jimmy as his nose looks completely different. After the confronting scenario, it turns out that the man has just pretended to be Jimmy and that Bob has under arrest for ten minutes. The man then gives a note to Bob explaining that the first patrolman had been Jimmy and that he went because he did not have the nerve to arrest his old friend, so he had left before he could be recognized and found a plainclothes officer to arrest him. Friendship is at the heart of “After Twenty Years.” The character who does the most talking, Bob, seems to be indisputably fervent about seeing his old friend Jimmy.

He speaks glowingly about what a great friend Jimmy was and relates that he has travelled across the country, over a thousand miles, to see him again. However, the story is indeed quite of surprise especially at the conclusion where it greatly shows how Jimmy Wells portrayed a noble act both to the law and to his friend. I find him loyal in coming to the arranged appointment with his friend and in apprehending into the law where he took an oath to serve in just and humane way. The conflict indeed is between Jimmy and his inner being where he was stocked in a very sensitive situation. Either he will let Bob go away and forget the crime he has done or arrest him and stay true to his society under his duty. It seems very impossible but the dilemma has solved well on a clever decision of Jimmy. Moreover, the scene where Jimmy sends another man to arrest Bob is my favourite part. Although, it was difficult for him I view this as an act of courtesy to Bob. It simply shows how strong their sentimental bond is. Jimmy also shows great sympathy and honour to his friend despite of the circumstances. Life is indeed unpredictable. You cannot deeply fathom how things really work on its unique way. Sometimes people turn bad and sometimes others were naturally made good.

However life is once again a matter of choice. What happened to Bob’s career and future was primarily his choice and Jimmy couldn’t do about it. On the other hand, Jimmy Wells made a good catch in himself as he remained in his hometown, got a noble job and performed well in realizing his duty. Thus, he never compromises the built friendship between him and Bob. After all a choice can be good or the other way around. One may choose to follow a good path by working on the side of the law and the other may choose to follow a bad path by breaking the law. The most important thing is you did the very thing that God wants you to do and I felt it in the story. Jimmy did a right thing and he solved the dilemma well. The last part of the story which is a note for Bob really moved me. His note is terse and offers no apology for having Bob arrested, but that is the best that Jimmy can do when he and a man who was once his best friend are on opposite sides of the law.

“After twenty years” by O. Henry. (2016, Apr 08). Retrieved from http://studymoose.com/after-twenty-years-by-o-henry-essay 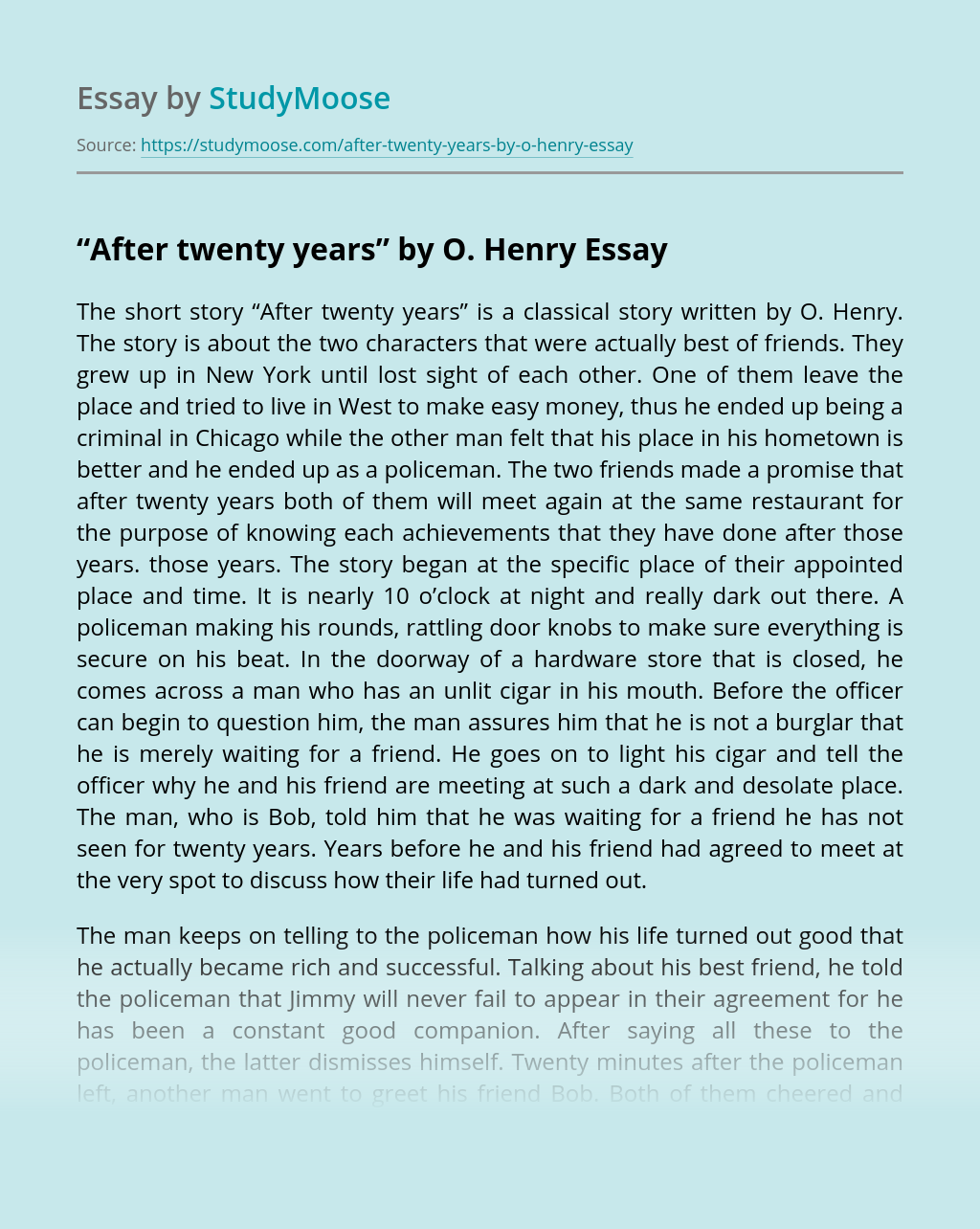