1 Identify the problem: What is your evaluation of the MGI team’s processes and outcomes? The MGI team was comprised of seven members, three of which were founders: Sasha Gimpeison, Igor Tkachenko, Roman Yakub, Dav Clark, Alexander Jan Sartakov, Dana Soiman, Henry Tam Jr. The evaluation of the MGI team concerning processes and outcomes can be determined by analyzing the five stages of team development. The five stages are, forming, storming, norming, performing, and adjourning. In forming the stage, members were brought into the team at different times.

For example, Dav Clark was not introduced until the third meeting. There were some conflicts and confusion among the group members in the storming stage. The confusion about group roles arose when Sasha felt Dana and Henry were merely interns. Dav and Igor, the other team members, saw Dana and Henry as strategic contributors to the business.

In the norming stage, the group usually starts to work together, conflict is reduced, and team confidence increases.

However, in this case, the team failed to establish proper ground rules and values, not allowing the team to function successfully. There were still disagreements between Sasha, Henry and Dana. Since no information regarding rules and norms had been formally discussed in the norming stage, the problems amongst the team followed them to the performing stage. The performing stage was unsuccessful because the team did not achieve their goal of finishing their task on time. The business plan was not completed by the appropriated time. In the final adjourning stage, due to the disagreements between group members, the task of completing the business plan was not accomplished in the allotted timeframe.

The task was to create a business plan, however the team did a poor job of assigning roles for each member to complete and their brainstorming sessions were led in a disorganized manner. Through this case, we also saw the formation of subgroups in the form of Dana and Henry, who were making the business plan, and Dav, Igor, and Sasha who worked on the technical side of product design. The founders were Sasha, Igor, and Roman. With this being said, role clarification was very poor and team members did not apply their skills as well as they could have with direction. Group members took on larger roles than they could handle, as evidenced by Henry and Dana when they struggled to finish their workload. From an organizational standpoint, there was no team leader and therefore a lack of cohesion within the team.

The team did a poor job of making decision and assigning roles. There was also no system of feedback from which they could find their faults and improve from them. Values and norms were never instilled in the team, giving the MGI team a poor culture to work in. Team members were putting fault on each other, as seen by Igor and Roman blaming Sasha for ignoring sales, while Sasha blamed Henry and others for not utilizing his contributions. Their self-serving bias as they took credit for good work but looked to blames others in tougher situations instead of taking collective responsibility. Their poor communication resulted in-group conflicts and lack of cohesion as a whole. 2 Evaluation: What are the strengths of the MGI team?

The diverse team at MGI was the biggest strength that the start-up possesed. MGI had collaborators from many different backgrounds that provided many of the expertises and skill sets that they needed. The MGI team had strengths when it came to musical and composition expertise. Roman and Igor provided musical skills and developed technical skills relating to using music in software. Roman and Igor were considered to be very creative and thus performed the creative duties of the product development phase. Dana, Henry, and Sasha all had a backgrounds in business. Dana, a second year HBS MBA student had some knowledge in media experience. Henry, also a second year HBS MBA student, had experience in product development. Sasha, a HBS MBA graduate, used his knowledge to organize MGI into a business and also provided financial abilities, obtaining investors twice.

Alex provided MGI with the Music Industry Market expertise that they needed to market the product correctly. Dav was a MIT graduate with software development experience. One of MGI’s other strengths was the idea of their product. While Dav, commented that the program needed technological help, the design of the software game was excellent. Alex who had knowledge of the industry was very impressed with the game and remarked that there was nothing on the market quite like it. The creativity and musical expertise that was incorporated into the game, gave MGI its largest strength. The MGI founders shared a common ethnicity and friendship that could be considered a strength. The founders also shared a dedication to creating and establishing the start-up as a viable company. Stemmed from the relationships that the founders had with each other, the case mentioned that none of them would leave MGI when the company was down. This close knit group of friends can cause issues in the workplace, but with the founders being close friends they all approached their business with the same level of seriousness and dedication.

3 Evaluation: How would you have evaluated the MGI team “on paper” prior to their first meeting? Before the first meeting, on paper, the MGI team looked both good and bad in different aspects.Before the first meeting MGI consisted of Sasha, Igor, Roman, Dana, and Henry. This is a very diverse group of people all having different areas of expertise, knowledge, and skills. Having a team created from many different schools of thought can be an advantage when finding innovative ideas. By having a team comprised of people from different areas of expertise, one would think that MGI would have a competitive advantage in creating a product/company that would be very innovative and well developed in all the concerning areas. Having a diverse team also poses issues relating to group cohesion.

The most obvious possibility of bad group cohesion is the fault lines that could be created between the founders and the HBS students. The three founders were not only long time friends but also immigrants to the US from the former Soviet Union. The possible fault line that could divide the team is a serious factor when determining if this is a viable team. Due to the diverse set of knowledge, experience, and backgrounds the MGI team had the possibilities to be successful “on paper”. Prior to the first meeting the MGI team’s only negatives would arise out of team cohesiveness and the ability to work together. 4 Evaluation: Are the differences among the team members an asset or liability? Or Both? Explain. The differences among the team members on the MGI team are both an asset and a liability.

The technical differences the MGI team possesses, are the required experience and knowledge that would be needed to create a successful software based musical game. The technical differences that the MGI team has are the best asset to the team. The cultural differences that the members of the MGI team posses are a liability. The members of the team all have very different ways that they participate in groups. Some of these differences lead to confrontations that create a win-lose negotiation type atmosphere with-in the team. Aggressive culture also creates an environment where some members are not able to contribute their ideas. This aggressive behavior lead Alex, to not speak up for the the lack of interest in the aggressive meetings that occurred.

5 Identify potential solutions: What could Henry have done earlier to avoid the team’s problems? How would this have affected the team’s processes or outcomes? Henry could have noticed that they lacked a leader, and no one on the team had specific roles. A potential solution could be to establish who was CEO and have the CEO coordinate meetings and assign team roles. A knowledgeable mentor could have helped the team get passed many of the amateur problems they faced.

Organized structure was also needed to help determine individual roles as well as roles for meetings. Major faultlines occurred between members in the MGI team, the most serious lines were between the HBS students and the founders of MGI. All of the members in these subgroups thought as one. There was no mixture of ideas, but two groups clashing inside of a team. Henry could have broken that faultline by splitting the group he belonged to and being creative with other members. All members on the team, equally could have solved the issues that destroyed the team, MGI lacked a leader.

6 Identify potential solutions: At the end of the case, what actions could Henry take? How would these actions affect the team’s processes or outcomes? The MGI team had great qualifications to be an effective team. MGI did not make the deadline because of its lack of direction and organization. This could have been nonexistent if one of the team members would have stepped up and took the role of leader. A leader is required to put all the diverse ideas into context that can help the team reach the ultimate goal. When there is no leader everyone likes their own ideas and thus those who are more aggressive control more of the processes. Henry may have not been the best leader out of everyone but someone needed take on that role and facilitate progress.

If MGI had a designated leader, he/she could make sure that team members had roles and duties they would be held responsible to. The leader could also have created project deadlines to make sure that the team met the contest deadlines. A leader would have been able to focus the entire team’s efforts towards a single goal.

7 Recommendation: At the end of the case, based on your potential solutions, which action would you recommend and why? How will you know if this action is effective. Establishing a team leader and seeking a credible mentor are two solutions that would pay dividends. The team leader would help maximize the group effort by dividing tasks accordingly, delegating responsibilities and coordinating team communication. A team leaders effectiveness will show results regarding group cohesion and team output.The second solution of a mentor could help organize the team but most importantly give every group member someone to look up to and respect. Every group member would be humbled with this effort helping to release tension between ego’s. 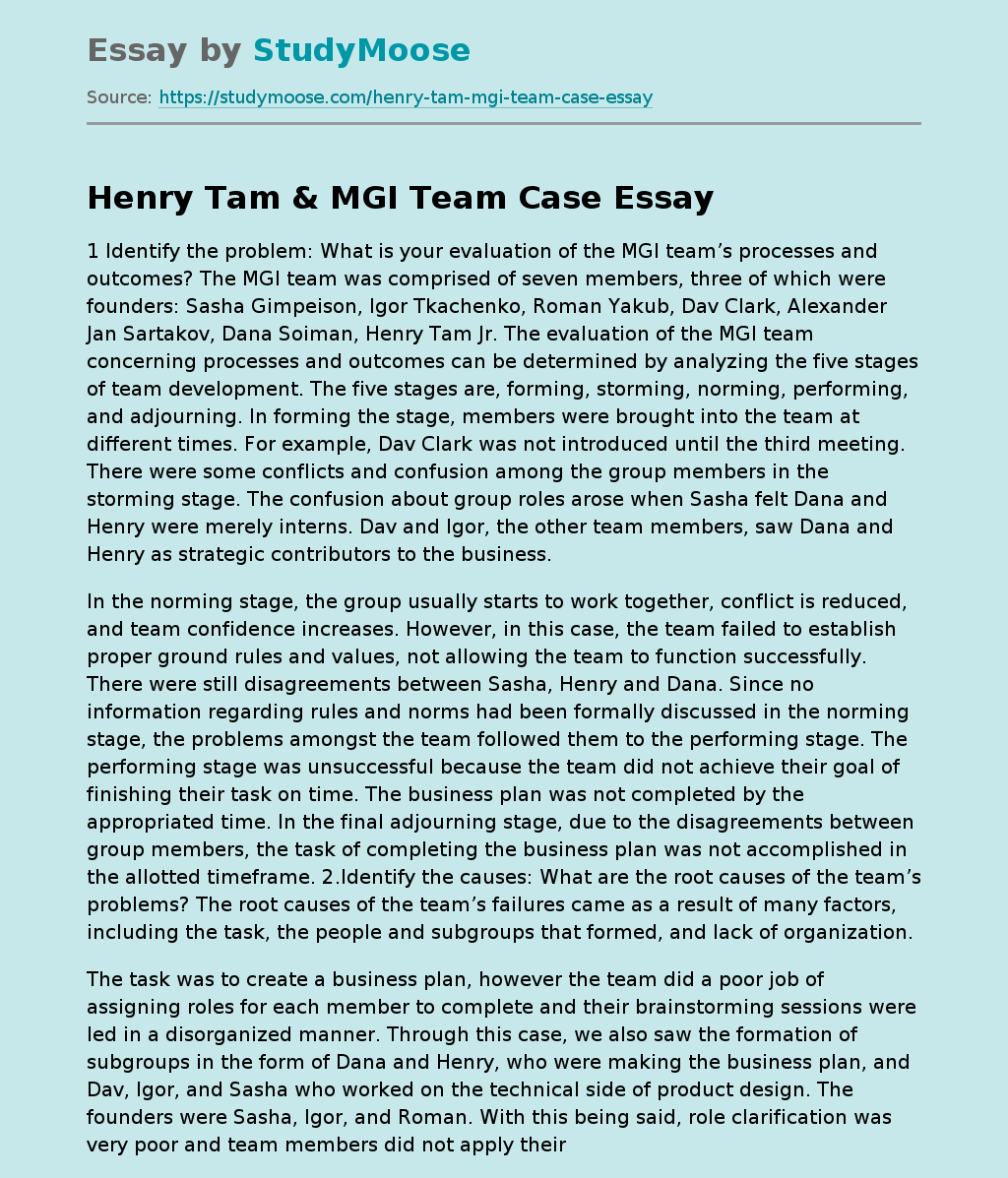