Case Study 8.1: His Team Gets the Best Assignments

Case Summary:
Jack’s team:
• Most creative
• Willing to go the extra mile
• Gets along well with Carly
• Often gets allocated extra resources
• Praised for a provocative ad campaign

Terri’s team:
• Counseled out of an ad campaign
• Performs well for the agency
• Unhappy with how Carly treats the team
• Holds animosity toward Carly
• Feels Carly is unfair and favors Jack’s team

Julie’s team:
• Notices Carly favors other teams
• Feels the other teams get the best writers and art directors • Feels Carly doesn’t notice her team or help it with its work • Feels undervalued

Sarah’s team:
• Sarah has worked for 10 years
• Agrees with some of Terri’s & Julie’s observations, but it doesn’t seem to bother her • Her team gets the job done
• Being in Carly’s ‘inner circle’ would require extra time and more headaches • No interest in changing the way department works
Carly Peters directs the creative department at Mills, Smith, & Peters, which has the reputation for being one of the best advertising and public relation agencies in the country.

Don't use plagiarized sources. Get your custom essay on
“ Case Study 8.1: His Team Gets the Best Assignments ”
Get custom paper
NEW! smart matching with writer

The department has four major account teams, each is led by an associate director, who report directly to Carly.

These four teams are headed by Jack, Terri, Julie, and Sarah. Each of the associate directors have different relationship with Carly.

Questions
1.Based on the principles of LMX theory, what observations would you make about Carly’s leadership at Mills, Smith and Peters? According to LMX theory and its research, subordinates become a part of the in-group or the out-group based on how well they work with the leader and how well the leader works with them.

Leaders should create a special relationship with all employees, similar to the in-group relationship. Leaders should also offer each employee the opportunity to take on new roles and responsibilities, and should look for ways to build trust and respect. It is clear from this case that Carly has different relationship with each associate directors. Jack’s team is the most creative and goes the extra mile. The result of these team members going the extra mile is that Carly, in turn, does more for them. Jack and Carly’s relationship is clearly in the phase three “partnership” of leadership making. Terri and Julie, claim that their teams perform well for the agency and hence, it’s clearly unfair for Carly to be biased towards Jack’s team. Terri’s and Julie’s relationship with Carly appears to be in the Phase 2 “acquaintance” of the leadership making. The quality of leader member exchange matters most to employees who feel less empowered, and in this case it matters the most to Terri and Julie. It is the responsibility of the leader to make high quality exchanges will all the employees and make them feel as part of in-group to avoid negative implications and inequities. Sarah’s team gets the job done for the agency and Sarah clearly doesn’t want to be in Carly’s in-group, as it will mean more responsibilities for her and her team. Carly has low quality exchanges with Sarah, and their relationship appears to be in the phase 1 “stranger” of the leadership making.

3.In what way is Carly’s relationship with the four groups productive or counterproductive to the overall goals of the agency? Leaders should have high quality exchanges and try to build effective dyads with all employees in the work unit, this would avoid inequities and negative implications of being in an out group. This in turn will also empower employees, and empowering them will have a positive implication on the job satisfaction, performance, turnover and the overall organizational goals. Carly’s relationship with Jack’s team is clearly productive. I feel that her relationship with Sarah’s team is also somewhat productive from an organizational standpoint, as Sarah mentions that her team gets the job done and she clearly doesn’t want to be in the in-group. However, her relationship with Terri’s and Julie’s team seems to affect the team’s morale. It also has made them feel ignored and invaluable, which would certainly affect the teams productivity in the future, and in turn would be counterproductive to the overall goals of the agency.

4.Do you think Carly should change her approach toward the associate directors? If so, what should she do differently? Definitely, organizations stand to gain much from having leaders who can create good working relationship. Carly should try to be an effective leader and build effective relationships with all her employees, the number one thing to do would be to communicate and listen to each of them about their roles and responsibilities. She should also support them in their tasks and motivate them to perform better. If she creates high quality exchanges, builds effective relationships and makes everyone feel a part of in-group, the team dynamics and attitudes will become more positive and this in turn will have positive effect on the overall goals of the organization.

Case Study 8.1: His Team Gets the Best Assignments. (2016, Feb 26). Retrieved from https://studymoose.com/case-study-8-1-his-team-gets-the-best-assignments-essay 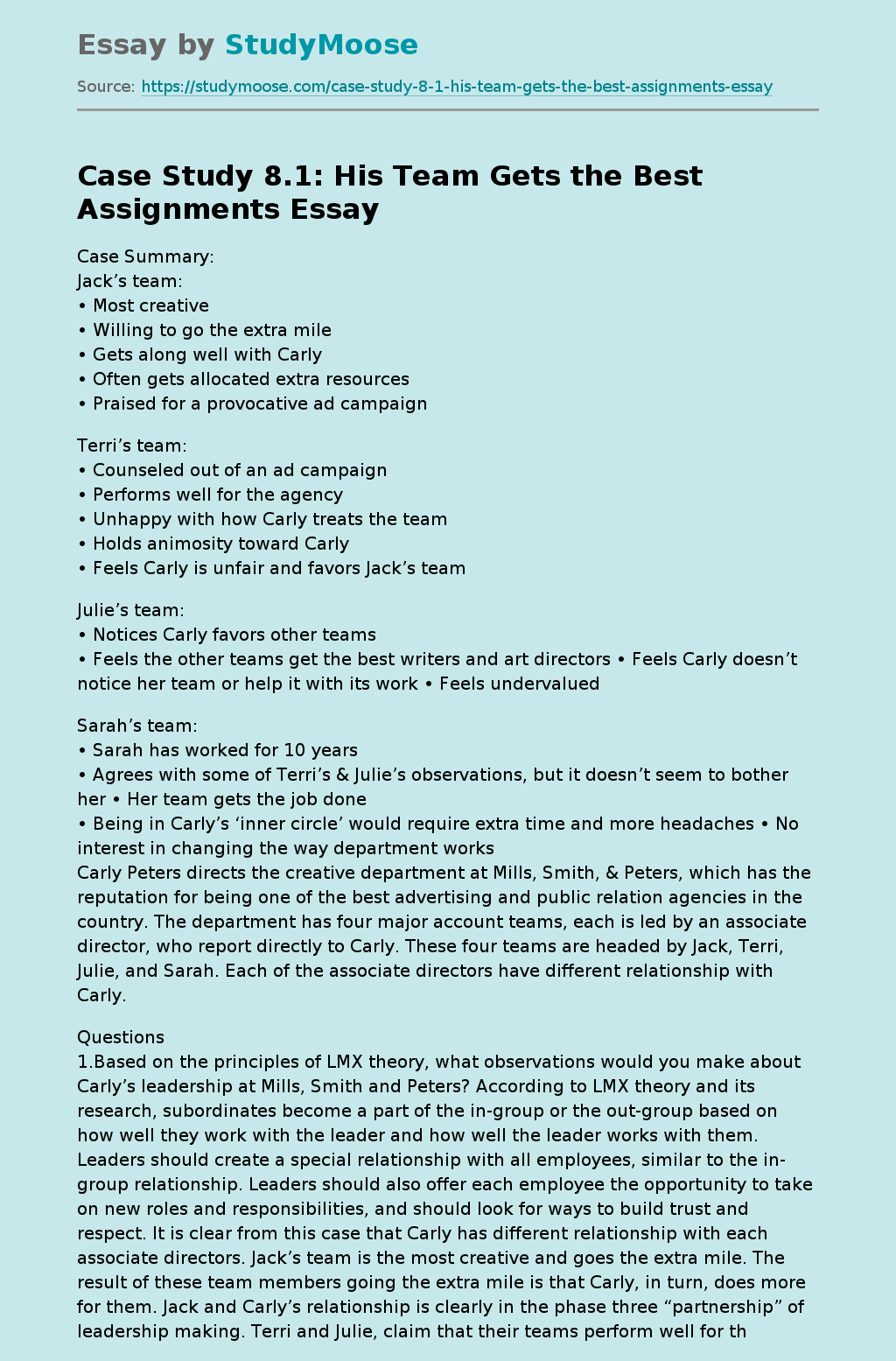