These poems are both themed on love, sex, romance and seduction. However, the attitudes towards their relationships and lovers are completely unlike. Andrew Marvell uses all forms of persuasion both negative and positive to get her into bed with him. On the other hand John Donne doesn’t seem to have to persuade his lover to sleep with him at all; it seems that she is already willing. He tells her “Two hundred to adore each breast: But thirty thousand to the rest”.

Don't use plagiarized sources. Get your custom essay on
“ ‘To His Coy Mistress’ by Andrew Marvell with ‘To His Mistress Going to Bed’ by John Donne ”
Get custom paper
NEW! smart matching with writer

This is an example of both, he is saying that this is what she is worth and this is the value she will have so long a she sleeps with him. He begins trying to persuade her with luxurious imagery (like the Indian Ganges and rubies).

He then progresses on to scare tactics, telling her that she soon will be dead so she must make the most of it whilst she still can! Although he doesn’t use those specific words he makes his meaning pretty obvious with phrases like, “the graves a fine and private place, But none, I think do there embrace”.

However in ‘To His Mistress Going to Bed’ there is no persuasion, just description. When he does flatter her, its less flattery, more complements, his words are more realistic, he says things like “off with that girdle, like heavens zone glistering, But a far fairer world encompassing”. You get the feeling that he really believes it, he’s really sincere, and although what he’s saying isn’t realistic, it is realistic that he believes this of his lover.

The main difference is that “To his Mistress Going to Bed” is more romantic, even though some don’t agree.

Also Donne uses iambic pentameter which is a direct reflection of the poet’s idea that there is no rush for sex. However Marvell poem is octosyllabic (particularly when compared to Donne’s) it seems to be quite fast, emphasizing the rush for sex.

It also allows it to build up to the conclusion in the line “Full nakedness, All joys are due to thee,” When this phrase does appear the comma emphasis’s the anxious anticipation felt in the previous lines, because of the pause (which also appears in the first line “Come, madam, come, all rest my powers defy”). It stresses the excitement felt at this point. Both poems use imagery; however the use of it is individual to each poem. In “To His Coy Mistress’ the imagery is linked to the persuasion alone where as in “His Mistress Going to Bed” it’s used to set a romantic scene. “In this love hallow’d temple, this soft bed. In such white robes, heavens angels used to be”. These are luxurious images- comparing their bed to a temple.

Also in these lines of comparison using the words ‘heaven’ and ‘angel’, it’s almost as if he’s suggesting that they’ll (eventually) go there together. That she is like an angel, their relationship sent from above. It’s romantic, loving and caring.

How the poem is written is a lot to do with the century it is written in, the poetic era, the poetic influences and lastly (but most obviously) the poet’s personality. Now, with a first glance at his poem you would probably find it rather confusing because of the graphic imagery and explicit sexual content. However when you take a closer look at the poem you can see Donne expressing his religious side. So we can tell that John Donne was a religious man and religion was very important to him:

“In this loves hallow’d temple, this soft bed.

In such white robes, heaven’s angels used be

Received by men: thou Angel bring’st with thee

By this these Angels from an evil sprite,”

All the words above are religious references, so as you can see he really did express his religious side. This also helps the poem convey it’s deeper, richer, more meaningful aspects. Now although Andrew Marvell does mention the soul it is not in conjunction with religion, it is more to do with death and pressurization. Having said this, Marvell does reveal his own unique personality. Marvell’s poem is strong and forceful which is a direct reflection of the person that he was. I think that his inability to accept that his lover might reject him is an example of his intolerant personality. However this inability to be tolerant could be a cover up for something much deeper down.

As I mentioned earlier the era a poem is written in is very influential in the way that it is written. They both use the idea of spirituality in unrelated ways. “To His Mistress Going to Bed” uses spirituality as a tool of romance, where as “To His Coy Mistress” uses it as a threat. The poets enjoyed exploring the idea of immortality. In Marvell’s poem he says “Nor in thy marble vault, shall sound” making reference to death.

In the sixteenth and seventeenth centuries purity was evidently at the top of people’s priority list as both poems use the idea. “My echoing song: then worms shall try that long preserved virginity”. This is telling his lover that she shouldn’t worry about losing her virginity because no matter what happens she will have to lose it. In ‘To His Mistress Going to Bed’ it says “Thyself: cast all, yea, this white linen hence”. Although literally it’s telling her to throw off the cover, metaphorically he’s telling her to cast aside her purity.

However from other sources we know that women who weren’t virgins were over looked for marriage. Once again I suggest that these men were hypocrites. Lastly I want to comment on the men’s opinion of women in general. In both poems there’s an opinion of women shown. Marvell says, “Had we but world enough and time, this coyness, lady, were no crime”. This suggests that Marvell thinks his lover to be coy, a false shyness, encouraging him to chase her for as long as possible without giving anything.

This is saying that she is sluttish, pretending for anyone else to see, that she is innocent, shy and pure, though this is just an illusion. Donne although kind and considerate throughout most of the poem he still insinuates that his mistress is deceptive. “To taste whole joys. Jems which you women use. Are as Atlanta’s Balls cast in men’s views”. This is saying that she uses clothing, jewellery, make-up etc. to throw deception in the path way of men. I believe that sixteenth and seventeenth century men had fixed ideas which they used for their own benefits whereas women had to be pure and have no secrets. From this I would like to suggest hat the sixteenth and seventeenth century attitudes were rather unfair.

I must admit that my opinion has completely altered from my first read of the poem to now, in many different ways. At first these poems seemed to give us a total insight into two men’s lusting for sex loosely veiled in disgustingly, transparent wrappings. However on my closer inspection I found the poems to have much deeper significance. ‘To his Coy Mistress’ gave us a view into a highly involved political mind. It cuts straight through any pretence and takes us directly to his desires. Where as ‘To His Mistress Going to Bed’ shows us capability of a man in love with God to love a lover. When I first saw these poems I thought that they were basically the same, both with the overall theme of sex. On closer inspection though I saw the differences, Donne’s being about romance and love, Marvell’s seduction and lust, now I see that they are completely different.

I believe that this shows men to be hypocrites. There are some differences between the attitudes conveyed in these poems and the one’s that I see written today. Today we are more free to talk about our emotions. Back in those centuries’ people didn’t have the opportunities we have today to express themselves where as in Donne and Marvell’s times emotional outlets were few and far between. Therefore when they did get an opportunity they really went into graphic detail, and although this can seem quite disgusting I can understand why it had to be this way.

My favourite of the two poems is “To His Mistress Going to Bed”. I preferred it because the atmosphere created by Donne is more loving, romantic and sincere. It really showed that he had deep emotional capability.

In conclusion I found both Donne’s and Marvell’s poetry quite amusing and in some ways comical, I say this for the reason that, you wouldn’t find many men writing love letters and poems to the girl they may adore or even love nowadays, because over time or even five centuries, people change, peoples’ habits change and so do the way of their love life. However, for a female, a love letter or even a poem is far more affectionate than a box of chocolates ever could be.

'To His Coy Mistress' by Andrew Marvell with 'To His Mistress Going to Bed' by John Donne. (2017, Sep 20). Retrieved from https://studymoose.com/to-his-coy-mistress-by-andrew-marvell-with-to-his-mistress-going-to-bed-by-john-donne-essay 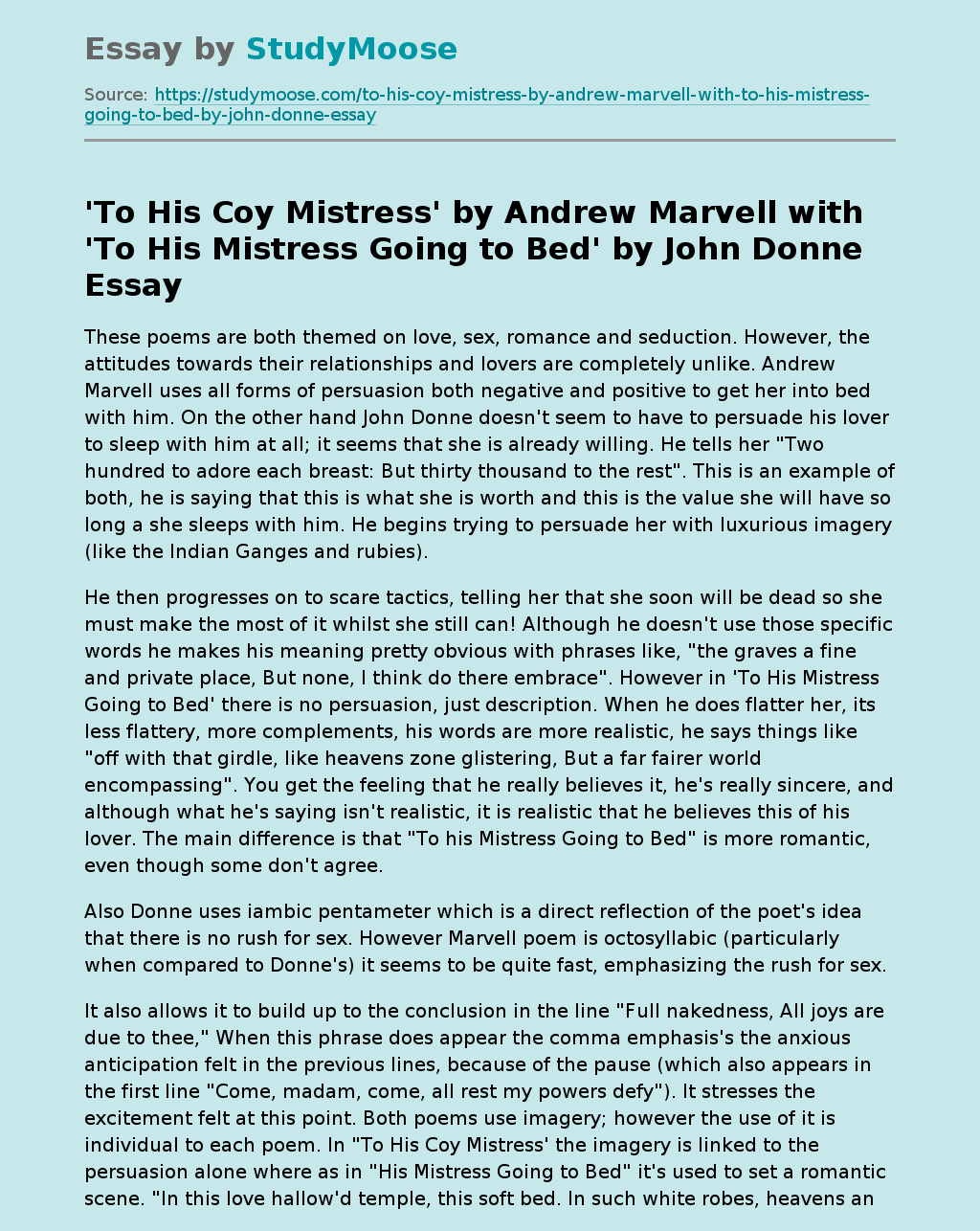