In my essay, I will be examining the theme of relationships in To His Coy Mistress by Andrew Marvell and Valentine by Carol Anne Duffy. I will write about the poems themes’, ideas, structure and linguistic devices. I will compare and contrast each poem, then give my opinion on my favourite and why. Andrew Marvell wrote his poem, To His Coy Mistress in the 16th century. The poem has three stanzas and is written in rhyming couplets. It is about a man who is in a rush to have sexual intercourse with his mistress.

Don't use plagiarized sources. Get your custom essay on
“ Examine the Themes of Relationship in To His Coy Mistress and Valentine ”
Get custom paper
NEW! smart matching with writer

He is lured by her beauty and wants to enjoy her beauty before the time is over. He presents a familiar theme in literature – carpe diem (meaning seize the day), he uses this as he tries to seduce a woman and declare his love for her, while she his shy and hesitant, he tries to persuade her to think that they must take advantage of the moment.

There are two themes in the poem, carpe diem and seduction. ‘Time’s winged chariot hurrying near;’ Here, he tells his mistress that time is flying so they should have sex now and seize the day, he is rushing her and trying to charm her by telling her to make the most of the time they have. The seduction theme is mostly implied in the third stanza, ‘through the iron gates of life.’ He refers to her hymen being broken and her virginity being taken as they make love. ‘Let us roll our strength… up into one ball,’ he wants them to be entwined and wrapped together as they have sex and have a connection.

Line 11 shows the young man who is pleading for the young lady to stop playing hard to get and accept his love, compare his love to a vegetable. ‘My vegetable love should grow,’ He could be using the vegetable as a phallic symbol to refer to his penis growing as he gets an erection.

However, he could be referring to his love growing for her as it is nurtured like a vegetable by love and feeling so that it flourishes. He mocks romantic poetry through crude imagery in Lines 27 and 28, ‘then worms shall try that long preserved virginity.’ He is persuading her by making her think that if she leaves it until she is old and dead and doesn’t have sex with him now, or the worms will be the only things that will get benefit of her body. As they eat her, they will take her virginity with them. Marvell uses a gross example of hyperbole in Line 15, ‘two hundred to adore each breast,’ now he tries seduce her by telling her if they had all the time in the world and they were immortal and could live forever, he would spend two hundred years staring at each breast.

He uses an expression of personal and private feelings such as: ‘and into ashes all my lust’ here he is being honourable towards his mistress as he describes his passionate desire towards her. He is now pressuring her as he is saying that when he dies and is made into ashes, i.e. cremated all his love for her will be burnt as well as his body. The structure of the poem is set out according to the ‘argument’. Stanza one and two are when he uses hyperbole and carpe diem to declare his love for the young lady and stanza three is the conclusion. The arguments are ‘If we had’ ‘but’ and ‘therefore’. The first stanza shows that the space and time are eternal as the second stanza shows that we ourselves are not. The third and final stanza shows that we only have to live our every moment for fun. The arguments are about eternal love and lust. Eternal love is long and lasting; therefore the first stanza is long as that is its subject. The life of the young man and the mistress is short, so is the second stanza.

The last stanza is short also, as sex and passion, in this case, is just a spark. There are two similes in the poem: ‘sits on thy skin like morning dew’ and ‘like amorous birds of prey’. The first simile represents the crystal-clear skin of the mistress and refers back to her beauty. The second stanza means the strength and speed and the passion made by the pair of lovers when they make love. ‘Nor would I love at a lower rate’ and ‘Time’s winged chariot hurrying near;’ are two examples of metaphor which are used in the poem. ‘Love her at a lower rate’ he is saying he would love her for as long as he could, but time equals money so they should just have sexual intercourse now before they waste even more time. He is summing up what he wants and getting straight to the point here. The second poem which I will be examining and analysing is Valentine by Carol Anne Duffy. Duffy has written this poem in seven stanzas, three of which consist of a single line.

It represents a real relationship as she wants us to speak more honestly about love in relationships. In this poem Duffy states her dislike for the normal stuff you get on Valentine’s Day. On a deeper level she wants to modernise the symbols we use for love. There are several themes in the poem, all of which are different to Marvell’s. They are all to do with a realistic relationship such as: honesty, romance, negative experience, tenderness and bitterness. The poet views love as healthy so long as it avoids both tacky romance and marriage. A ‘red rose’, a ‘satin heart’ and a ‘cute card’ are the usual lovers’ gifts on Valentine’s Day. Duffy is harsh on these clichï¿½d symbols of love. In the poem Duffy suggests these normal cards, red roses and kissograms lack any real meaning: ‘Not a red rose or a satin heart’, ‘Not a cute card or a kissogram’.

She seems to be a tough character as she gives her lover and onion instead of a rose, ‘I give you an onion.’ She looks at the different ways that an onion is suitable for showing love as she tells her lover what an onion will do for him. The onion represents light, discovery and tears; it represents the tough side of love. She thinks the onion stands for the truth about love, therefore the poem takes a deep look at it as she looks at what love is made up of. Duffy explores what makes a relationship meaningful, ‘I am trying to be truthful,’ she argues that you have to be honest to make a relationship work. The first linguistic device in the poem is a metaphor and how it explains why an onion works as a love gift. ‘It is a moon wrapped in born paper,’ the brown skin is the wrapping paper of the gift, the onion.

She compares her gift to a moon wrapped in brown paper, this picture of the moon represents the whole onion, just after it has been peeled, and we know that when the paper is removed we will see the moon’s light. The moon’s ‘light’ represents love, and moonlight often provides a romantic setting. ‘Light’ can also mean the truth. The peeling of the onion is like two people taking off each other’s clothes before they make love: ‘like the careful undressing of love’. The different layers of the onion are like the layers of someone’s personality. You gradually discover these layers in a love relationship. The onion represents discovery. The third stanza shows that love is more complex than lovey-dovey romance. In line 6, she announces her gift to her lover: ‘Here’. She is obviously handing the onion to the other person to hold and peel, it is then that we see another aspect of love, ‘tears’. At some stage in the peeling or the unwrapping of the onion, the eye sheds tears.

‘Tears’ and ‘grief’ are part of real life love so the reason for these tears is emotional. Not only will the onion make your eyes water, the pain caused by a loved one similarly brings tears. Photos of happy moments are usually shared between lovers so it is imagined that in real life there are moments of hurt or sorrow in a relationship. Duffy thinks lovers should honestly admit to these too, ‘wobbling photo of grief’. She uses the language of a wedding as she offers her onion gift: ‘I give you an onion,’ that sentence sounds like ‘I give you this ring’. The poem states that the taste and scent of an onion are like the passion of love, an onion is a good symbol for passion because its taste remains with you, ‘stay on your lips’. In the last stanza, Duffy demands her lover take the gift, ‘Take it.’ She tells him that they might marry.

She suggests that the bright white core of the onion is like a wedding ring, ‘Its platinum loops shrink to a wedding ring’. The final image about scent clinging has another meaning, scents linger after lovemaking. These scents will remain in memory after the relationship ends. The smell of an onion stays on your fingers for good while, again, the onion proves to be a good way of getting the poet’s message across. After examining each poem I have chosen Valentine as my favourite poem.

In Marvell’s poem, I could feel the passion of the young man, and how much he admired the coy Mistress, but I came to the conclusion that the poem was a little smutty. Therefore, I chose Valentine as I liked how she used the onion as a love symbol in a realistic relationship. The idea of the scent ‘cling to your knife’ was very real, just like a relationship, sharp and cutting. In conclusion, I have examined the theme of relationships between the two poems To His Coy Mistress and Valentine. I have explored the linguistic devices and ideas of the poems, also giving my opinion on my favourite and why.

Examine the Themes of Relationship in To His Coy Mistress and Valentine. (2017, Sep 23). Retrieved from http://studymoose.com/examine-the-themes-of-relationship-in-to-his-coy-mistress-and-valentine-essay 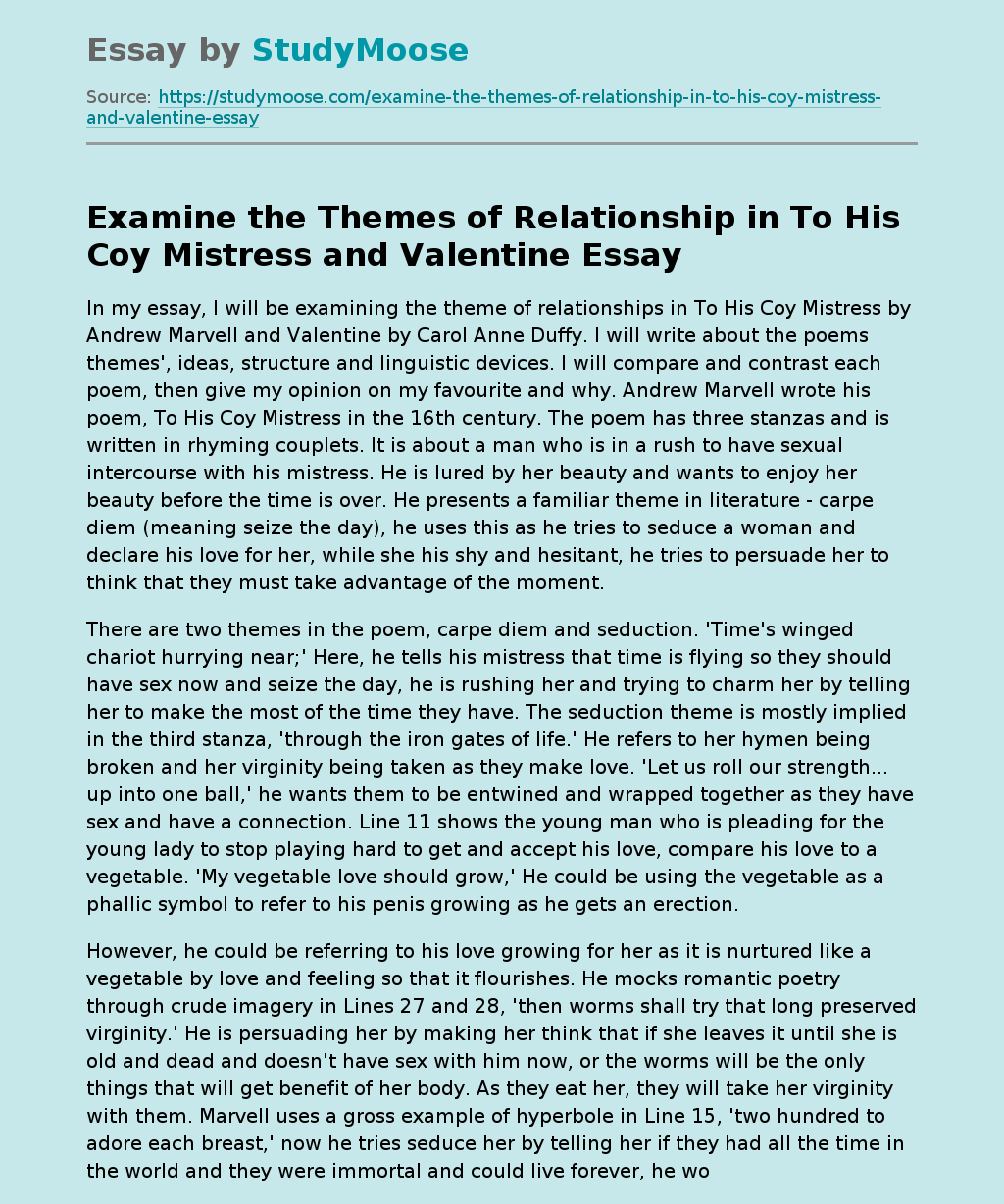