Poems To His Coy Mistress and Valentine

Don't use plagiarized sources. Get your custom essay on
“ Poems To His Coy Mistress and Valentine ”
Get custom paper
NEW! smart matching with writer

‘To his coy mistress’ is relatively long as a lot is needed to say, to create impact. The theme is that of lust and time affecting love: “… and into ashes all my lust”, this line sums up the main theme of the poem. ‘Valentine’ is a relatively short poem yet it still has impact as good as the first poem. This is because a lot is covered by the theme of an onion being a symbol of love: “Its fierce kiss will stay on your lips”, this sums up the main theme of the poem of eternal love.

The moods the poems create are powerful because they are shown off effectively. In ‘To his coy mistress’ the mood is slow and seductive during the first paragraph: “An hundred years should go to praise. Thine eyes, and on thy forehead gaze.” This explains the admiration that the man has for the woman and his admiration of her body, basically praising her looks. “My vegetable love should grow.

Vaster than empires and more slow.”, these lines show that time will affect his lust for her and the rate at which his love grows. In the second paragraph the mood is very blunt and less romantic as the man is very truthful with his seductive side.

He tries to emphasise his persuasion for her love by telling her that if she doesn’t give in, time will pass quickly and before she knows it she will be six-feet under with no love, and nobody will want her then: And your quaint honour turn to dust, And into ashes all my lust; The grave’s a fine and private place, But none, I think, do there embrace. The tone is lowered here, and I think any successful seduction has been lost here. In the final paragraph, the charm is turned back on again as once again he compliments her and tells her not to worry, as time is of the essence and they can waste no time – “Now let us sport while we may, And now, like amorous birds of prey.”, he offers a solution to wasted virginity and becomes romantic once again, lusting after her.

In ‘Valentine’ the mood is romantic as in the first poem, but, it is metaphoric and uses the idea of an onion. It strikes as being truthful and an accurate account of love being an onion. The poet makes the poem as realistic as possible, keeping the aspects of an onion and love in keeping with reality – “I am trying to be truthful. Not a cute card or a kissogram”. Repetition of the lines “I give you an onion.” give the effect of reality along with very forceful offers of the onion like “Here.”, “Take it.” and “Lethal.”, it is like the poet is speaking directly to the reader and they are somehow involved in the situation of giving within the poem.

The settings of both poems are not clear at all but, I can say that they are set in a conversation with another person. This is clear through the uses of words “We would.” and “You deserve.” in ‘To his coy mistress’, and through “I give you.” and “your fingers.” in ‘Valentine’. The reader is in contact with the poet and is directly involved with the poem, as the one who listens to what they have to say.

‘To his coy mistress’ is a descriptive poem with lots of details like: “Let us roll all our strength and all our sweetness up into one ball.” – Its aim is to give lots of descriptive language in order to successfully seduce the woman and ultimately have sex with her. ‘Valentine’ is a dramatic poem, using a metaphor against the emotional ideas of love. The drama within the poem is used for emphasis e.g. “It will make your reflection a wobbling photo of grief.” In ‘To his coy mistress’ the style is like a formal conversation. The poet uses formal language, as he never refers directly to sex, just hints e.g. “Let us sport while we may.” It is also conversational because as said earlier, the poet talks to the reader. ‘Valentine’ is a figurative as it uses a metaphor to compare love with something else.

‘To his coy mistress’ is set out into sections. It uses rhyming couplets for emphasis e.g. “time” and “crime” and “strife” and “life”. This is very imaginative and must’ve been tough finding words that rhyme to get the point across. ‘Valentine’ is placed in to verses of only a sentence or two, although, some sentences are broken into slower paced lines through use of commas e.g. “lips,”, it uses short statements to put a strong statement across e.g.

“Not a cute card or a kissogram.” Marvell’s ‘To his coy mistress’ was written in 1681, this might be why he is very seductive towards the woman. Nowadays, it could be seduction either way but I guess that back then the man was the one to seduce the woman, as women were ‘inferior’ back then. The vocabulary is affected by the time it was written as it uses a lot of old fashioned English words like “thy”, “thine” and “thou”.

The language used doesn’t directly point to sex, but reading it you get the jist of things e.g. “like amorous birds of prey.” Duffy’s ‘Valentine’ was written in 1993. It shows an original idea of an onion being an extended metaphor of love. The imagery links directly and they do relate to each other e.g. “careful undressing.” and “blind you with tears.” as both need to be carefully undressed and love can make you cry just like a onion makes your eyes water with its strong smell and vapour. The vocabulary used is modern and easily understandable and is a lot easier to translate than the first poem.

The poets of ‘To his coy mistress’ and ‘Valentine’ use the same technique as viewpoints, they are both the characters in the poem talking to the reader directly and involving them in the conversation or situation e.g. “I” and “We” from both poems. This is a very good technique as it can address a lot of people individually. ‘Valentine’ can even be a direct talk to a loved one, if you were to send it.

Poems To His Coy Mistress and Valentine. (2020, Jun 01). Retrieved from http://studymoose.com/poems-to-his-coy-mistress-and-valentine-essay 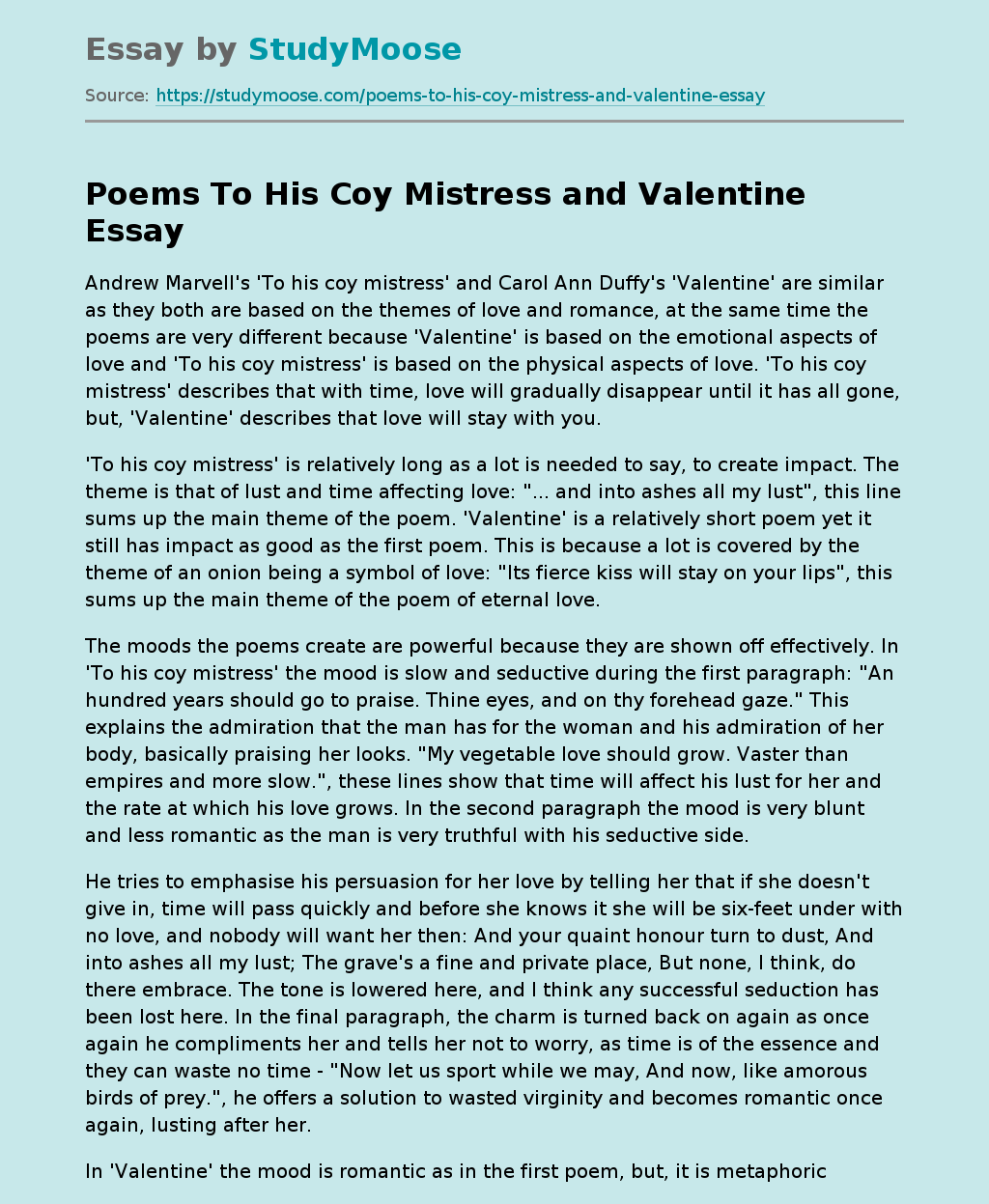