The best-fit and the best-practices compensation model

The terms “best fit” and “best practice” are used in strategic human resource management and applied to the specific policy area of reward systems. Each approach attempts to explain the way that HR policies in general and reward policies in particular can lead to greater organizational effectiveness.

The “best fit” perspective claims that a firm’s reward system should be aligned to support the organization’s business strategy in order to achieve competitive advantage. “Best practice” advocates claim that there is a bundle of HR policies including the reward system that lead to highly motivated and committed employees who are the key to an organization’s competitive advantage.

Don't use plagiarized sources. Get your custom essay on
“ The best-fit and the best-practices compensation model ”
Get custom paper
NEW! smart matching with writer

There is a lack of clarity about the specific characteristics of either perspective as applied to pay model.

Lawler (1995, p. 14) states that all organizational systems must start with business strategy because “…it specifies what the company wants to accomplish, how it wants to behave, and the kinds of performance and performance levels it must demonstrate to be effective.

” Business strategy, driving individual and organizational behaviors, is the touchstone for the development of the reward strategy.

The contingent nature of the reward system is emphasized by Lawler (1995, p. 14) when he states, “indeed the ‘new pay’ is not a set of compensation practices at all, but rather a way of thinking about the role of reward systems in a complex organization…it argues against an assumption that certain best practices must be incorporated into a company’s approach to pay.” Indeed, he contrasts the reward system for a traditional management style with one that fosters employee involvement.

The correct fit for the former includes a reward system that is job-based with merit pay while for the latter it is skill-based with bonuses based on business success.

Schuster and Zingheim (1993, p. 6) also follow a contingent approach but argue that “Merit pay and traditional performance appraisal make it impossible to view employees as key elements of organizational strategy and tactics.” They suggest that every element of an organization’s reward system should contribute to expanding employees’ line of site “…to include concern about how their organization is performing.” (Schuster and Zingheim, 1993, p. 6) Variable or incentive pay, which is not consolidated into base pay, replaces the traditional merit plan.

According to Conway (2003), research examining ‘high commitment management’ in HRM has its roots in both the configurationally and the universal theoretical frameworks. Marchington and Wilkinson (2002, p. 177), claim that “most of the interest over the last decade or so has been in models of “high commitment” or “best practice” HRM, stimulated initially by the work of a number of US academics, but developed more recently by people in Britain as well.” While, for the most part this is a generalist HR debate, writers such as Pfeffer and Huselid applied best practice principles to the field of reward. In doing this they build on the work of Herzberg (1966) and Kohn (1993).

Both approaches believe that HR practices should be complimentary. However, according to Purcell (1999, p. 27), “…what is most notable about the best practice model is there is no discussion on company strategy at all.” The underlying premise of this view is that organizations adopting a set of best practices attract super human resources, talent and competencies. “These superior human resources will, in turn, influence the strategy the organization adopts and is the source of its competitive advantage.” (Milkovich & Newman, 2002, p. 30)

Advocates suggest there are mutually compatible ‘bundles’ of HR policies that promote high levels of employee motivation and commitment that positively impact on organizational performance. Although there is not unanimous agreement in identifying these practices, the list generally includes: selective hiring, extensive training, employment security, a structure that encourages employee participation and pay policies that lead in relation to industry competitors. (Pfeffer, 1998a; Huselid, 1995) One obvious point of contradiction is in the area of pay linked to performance appraisal. Pfeffer (1998a, pp. 203-204) criticizes merit pay on five grounds:1. Subjectivity and capriciousness that reward political skills… rather than performance.

2. An emphasis on the success of the individuals…consequently undermining teamwork.

3. An absence of concern for organizational performance.

4. Encouragement of short-term focus…5. The tendency of such systems to produce fear in the work place.

This brief description of the two approaches indicates that there is one main area of agreement. HR policies should be congruent. Reward systems, as one policy area should interconnect and complement other policies like employee selection, training and performance appraisal. However, there is also a fundamental disagreement. Best fit policies are contingent. They are developed or amended to maintain a “line of sight” with strategy. This means that an organization’s reward system will be unique and should conceivably change with major adjustments to organizational strategy. Best practice policies are universal. The policy bundle does not change regardless of the organization’s strategic thrust. This suggests that similar reward systems will prevail across organizations and industries.

However, advocates of either approach are not in complete agreement about the impact on reward systems. Schuster and Zingheim (1993) suggest that employee rewards should always be tied to organizational performance. Lawler’s (1995) approach is truly contingent. His traditional management design option does not include any pay element that varies with organizational performance. Although considered a universal approach, best practice advocates have not identified an agreed bundle HR policies. There is also a striking lack of universality with regard to reward systems. Theoretical discussion and empirical research does not shed light on specific reward elements adopted by organizations with a ‘best practice’ orientation.

As a conclusion, I would hardly recommend any of the practices without conducting further studies of every specific Egyptian organization or classified industry. Currently, the public sector in Egypt can not afford building a reliable system using the “best fit” method. Only when we reach a moment of having a commonly supported understanding of the HR science, then the compensation model can be unified, while covering the need or Egyptian society.

The best-fit and the best-practices compensation model. (2016, Jul 24). Retrieved from https://studymoose.com/the-best-fit-and-the-best-practices-compensation-model-essay 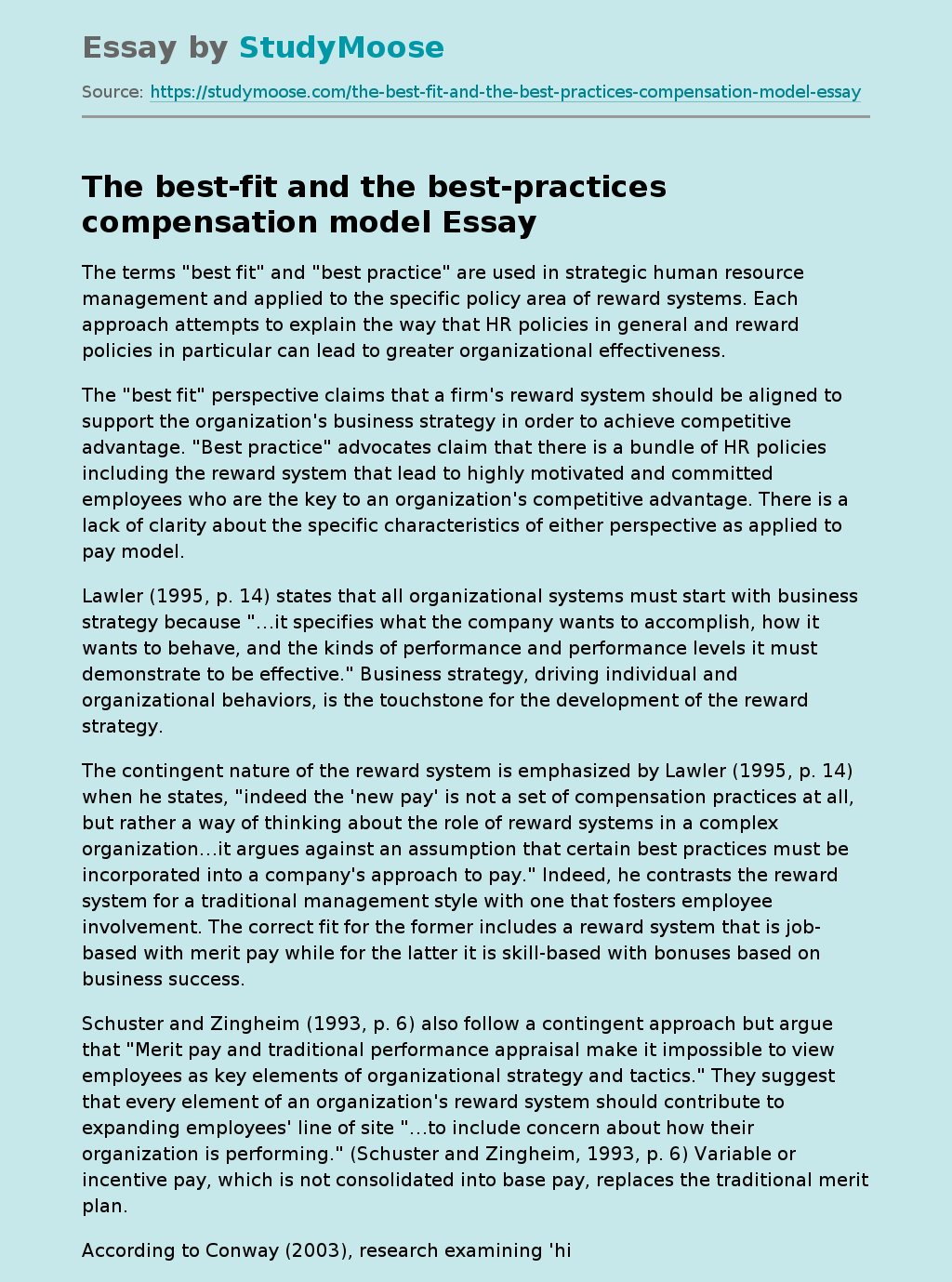