Rewards and incentives are related but quite different things. An incentive is something that tends to stimulate or spur individual or group action. A reward is something tangible or intangible that is given to an individual or group for a service. Rewards are given for one of two reasons: (1) outstanding performance of assigned duties and tasks, or (2) unique contributions to the organization either job-related or non-job-related (Tracey, 1999).

Don't use plagiarized sources. Get your custom essay on
“ Tangible and Intangible Rewards ”
Get custom paper
NEW! smart matching with writer

They can be used selectively to build a sense of internal motivation within the group. This is accomplished through another behavior modification principal paired association (Tracey, 1999).

Tangible rewards make group members “feel good”, and these rewards follow a major accomplishment, then sooner or later the accomplishment itself will lead to a very positive feeling. This, in a nutshell, is the longer term justification for selectively using external rewards.

Social rewards are among the most powerful ways of recognizing and rewarding achievements (Andrews, 1999).

The need for affiliation is a basic motivator of work groups. Belonging to a special group, and having the time and resources to hang out with that group is very motivating and engaging. Consequently, providing rewards that allow group members the opportunity to socialize is a very effective strategy in motivating group work (Andrews, 1999).

Such rewards might include something as simple as “free-time” to socialize. Food always serves as an instigator of social activity. A pizza party as a reward for a work group accomplishing its goals is a sure thing.

Other social opportunities may involve a trip to a local restaurant or a group trip to the movie theater. While the activity itself may be motivating, it is the concept of doing that activity with other members in a group setting that adds value (Andrews, 1999).

Factors to Consider in the Dispensation of Rewards

Rewarding group accomplishments leads to cooperation among group members and a sense of teamwork (Andrews, 1999).

Reward the effort, not the outcome.

It is important to recognize the effort, not the final result, is often the thing that should be rewarded. As the old saying goes, “It is not whether you win or lose, but how you play the game.” Try listing the behaviors you want to promote in getting to the end result. Find a way to count or track these behaviors and reward these behaviors rather than the end result. If you are looking to improve group performance, it is wiser to reward the number of problems successfully solved, than to go directly to rewarding the final outcome. Of all the factors that tend to encourage and develop highly motivated workers, recognizing and rewarding outstanding performance head the list (Andrews, 1999).

Rewards should be presented for outstanding individual or group achievement or for superior performance. For example, rewards can be presented for accomplishments that (1) result in significant improvements in productivity; (2) reduce labor, material or other costs; (3) improve personnel utilization and company operations; (4) improve services offered to the public, customers, clients or consumers; (5) provide significant gains in occupational safety or health; or (6) enhance the image and reputation of the organization in the industry or the community at large (Tracey, 1999).

Extrinsic rewards are controlled by the organization, the work group, the boss, or a work partner. Extrinsic rewards are rewards that are not implicit in the action or the achievement. Rather, they flow from the attainment. Bonuses, promotion, improved rank and status, perquisites, praise, smiles, nods and pats on the back are examples of extrinsic rewards (Tracey, 1999).

Excellence is its own reward. That is the essence of intrinsic rewards. Most professionals want to accomplish something difficult. They enjoy overcoming obstacles and achieving high standards. They constantly strive to excel themselves beat their own records, yet they take equal pleasure in rivaling and surpassing others. So, an intrinsic reward is one that is part and parcel of the accomplishment. Whatever was achieved in and of itself provides the feedback to the doer which says, “You did a great job!” (Tracey, 1999).

Tangible rewards are concrete and touchable. Examples are bonuses, savings bonds, trophies, plaques, certificates or items selected from a gift catalog. Used in the right situations and with the right people, tangible rewards can result in significant reinforcement of desired behaviors (Tracey, 1999).

Intangible rewards include social approval in the forms of praise, smiles, nods and pats on the back. Intangible rewards are particularly effective if they involve the approval of people who “count.” Intangible rewards also include such things as assignment to prestigious work groups and special individual assignments as well as such forms of recognition as public announcement of achievements and honorary titles such as “Employee of the Month” (Tracey, 1999).

Rewards and incentives work because people need them. Psychologically, people desire recognition, need to feel a part of a team, and want to do a good job. But people, after all, are only human. Long-term personal goals often fall prey to daily or weekly frustrations. Also, people may find it hard to meld personal goals with their organization’s long-term or even short-term goals. Some people may have trouble sculpting individual performance goals at all. In all cases, excitement, interest and performance can suffer (Powers, 2000).

Rewards and incentives offer a cure: They provide concrete rewards for quality performance that is consistent with short and long-term organizational objectives. They present visible goals with visible acknowledgement, helping keep people on track toward personal and company performance (Powers, 2000). 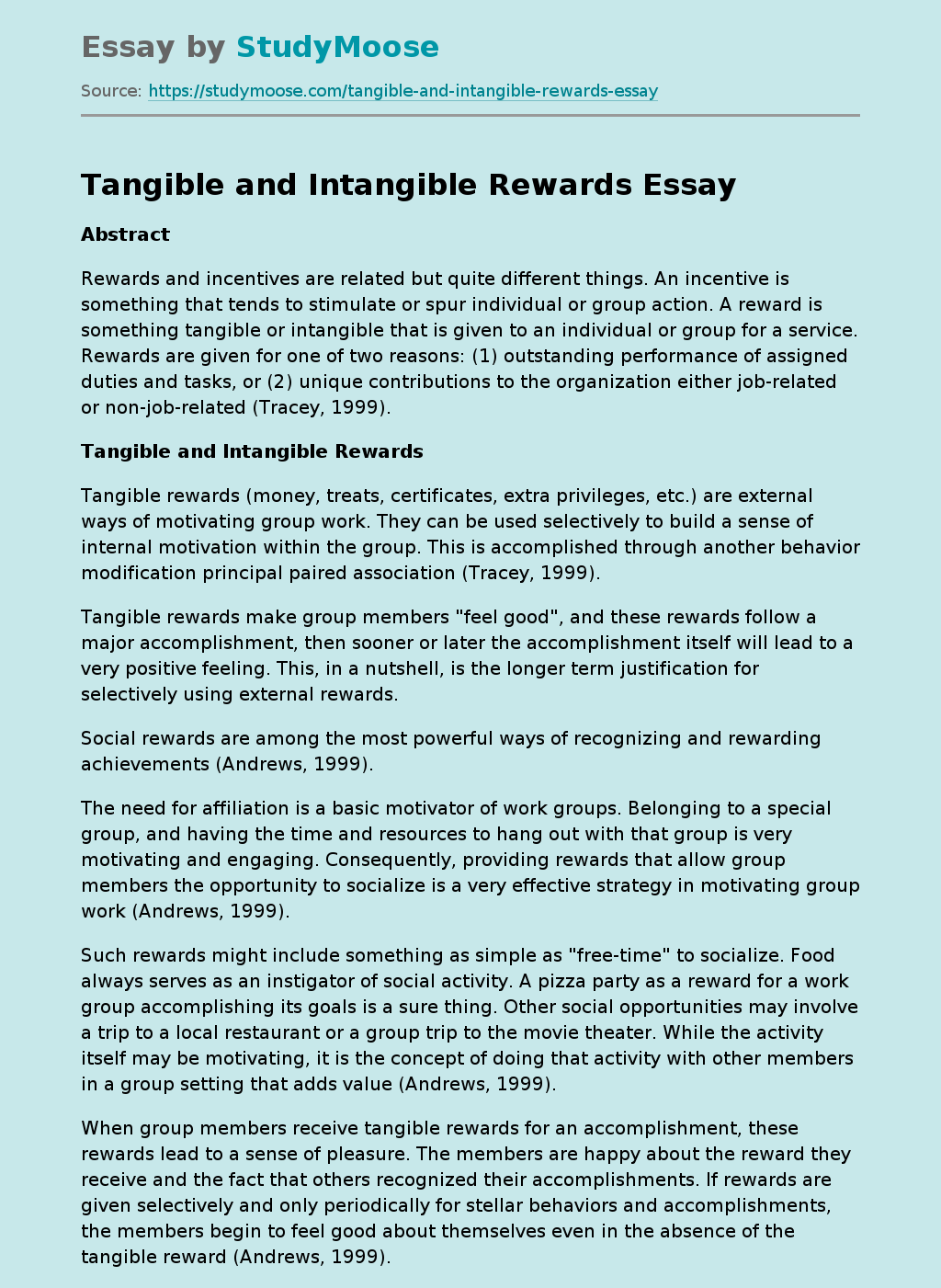