'Daddy' and 'The Arrival of the Bee Box' By Sylvia Plath

Sylvia Plath was born in 1932 to Otto Plath, a German immigrant and Aurelia Plath, an American of Austrian descent. She had a very troubled life, suffering extreme depression and emotional trauma before she committed suicide in 1963 by putting her head into a gas oven. Most of her poems reflect this distress and reveal the sorrows of her short life. The poems ‘Daddy and ‘The Arrival of the Bee Box’ are both sad and gloomy poems which highlight many aspects of her life and perhaps reason out why she was forced to kill herself.

Don't use plagiarized sources. Get your custom essay on
“ ‘Daddy’ and ‘The Arrival of the Bee Box’ By Sylvia Plath ”
Get custom paper
NEW! smart matching with writer

Both the poems are directly or indirectly related to the two most important and influential men of Sylvia’s life- her father, and her husband Ted Hughes, who himself was a poet. She loved both men, but both of them dominated her and gave her pain and misery which made her life unhappy. As the title suggests, the poem ‘Daddy’ is primarily about her father, but many references are also made to Ted Hughes.

‘The Arrival of the Bee Box’ is more about herself, but in spite of that the reader has to know the nature of these two men to understand the poem completely and derive a meaning from it. ‘Daddy’ highlights the relationship of Sylvia and her father.

Sylvia’s father died when she was just ten. This was the time when she adored her father and his death meant a lot to her. But the poem shows the immense hatred she has towards him as she gradually realized how he oppressed her and dominated her life.

To use the word ‘daddy’ as the title of the poem is in a way ironical because although the poem is about Sylvia’s father, the word doesn’t fit in particularly well, as it is usually used in a positive way, not in a pessimistic and dark way. The poem has a lot of imagery, metaphors and similes which illustrates Sylvia’s anger towards her father and husband and gives the poem a dark tone.

In the poem Sylvia has compared her father to a ‘black shoe’ while has called herself a foot living in it for thirty years. Usually a shoe’s job is to protect or comfort the foot, not to make it feel trapped and helpless. Her father was so authoritarian, that he made Sylvia feel just that. Although her father died when she was ten, she says that she lived like the foot for thirty years, “barely daring to breathe or achoo”. This shows that her father’s nature haunted her even after he died, as it left such a profound and negative psychological mark on her.

The word ‘black’ can be related to death and makes us think of the shoe like a coffin. The idea of a coffin can also be related in the other poem, ‘The Arrival of the Bee Box’, when Sylvia calls the bee box a midget’s coffin. Sylvia’s father was a zoology and bee expert, and so again we can notice how she has created a dark atmosphere with everything related to her father. On an abstract level, the ‘bee box’ can be thought of as Sylvia’s brain and the bees as her thoughts. The idea of her thoughts being trapped inside a coffin shows how depressed and unhappy she is.

The imagery of ‘Daddy’ is very vivid and striking. Sylvia calls her father a Nazi as she writes, “With your Luftwaffe, your gobbledygoo. And you’re neat moustache and your Aryan eye, bright blue”. She compares her father to Hitler, highlighting how cruel and heartless he was. She calls herself a Jew, indicating how he used his authority to oppress her. Such thoughts make us refer to the Holocaust, in which Jews were tortured and killed by the German Nazis. Although Sylvia was dominated by her father, she has used a Hyperbole to describe the situation. According to me her father must not have been as ruthless as Hitler. She has just used this comparison to express her immeasurable hatred towards him.

She has further developed images of her father by calling him a vampire-someone who doesn’t kill a person, but haunts it all his life by sucking his blood. She is trying to say that although her father is dead, his character will torment her forever. The imagery of ‘The Arrival of the Bee Box’ is also strong. We get a clear picture of the bees struggling in the dark box illustrating how Sylvia is thinking and feeling. We get a feeling that her thoughts are tormenting her and that she is in a disturbed state of mind. She compares her thoughts to a Roman Mob and says she is not Julius Caesar to control them. Although it is not mentioned, we know that Sylvia is in such a state of mind because of her broken marriage with Ted Hughes. She might be feeling cheated as Ted Hughes left her for another woman. She must be feeling insecure and lonely and cannot in any way run away from her thoughts.

In ‘Daddy’ Sylvia also says that she found her father’s resemblance in Ted Hughes, who also dominated her and broke her heart. Here she compares their torture to the medieval methods of the rack and the screw which were cruel and bloody. The tone of the poem is of fear and a little bit of anger, blaming her father and her husband for giving her such a horrid life and simultaneously feeling scared of all that has happened to her in the past. The tone of ‘The Arrival of the Bee Box’ is different, as she is sort of blaming herself for what she thinks. She is agitated with herself because she cannot get rid of her negative thoughts.

The last two stanzas of both the poems are very strong and demonstrate an attitude of power and authority from Sylvia. In ‘daddy’ the tone changes from fear to anger when Sylvia says, “Daddy, daddy, you bastard, I’m through”. One feels that she has overcome all her fears to finally stand up to her father and speak with confidence and fight back. In ‘The Arrival of the Bee Box” she shows that she has power when she says, “Tomorrow I will be sweet God, I will set them free”. But here she makes it a point to tell the reader that she will not misuse her authority like the way Otto Plath and Ted Hughes did. In the last line of the poem she says that the box is only temporary, showing that she will make an effort to remove those thoughts from her mind, which is a positive end to the poem.

'Daddy' and 'The Arrival of the Bee Box' By Sylvia Plath. (2017, Nov 15). Retrieved from https://studymoose.com/commentary-on-daddy-and-the-arrival-of-the-bee-box-by-sylvia-plath-essay 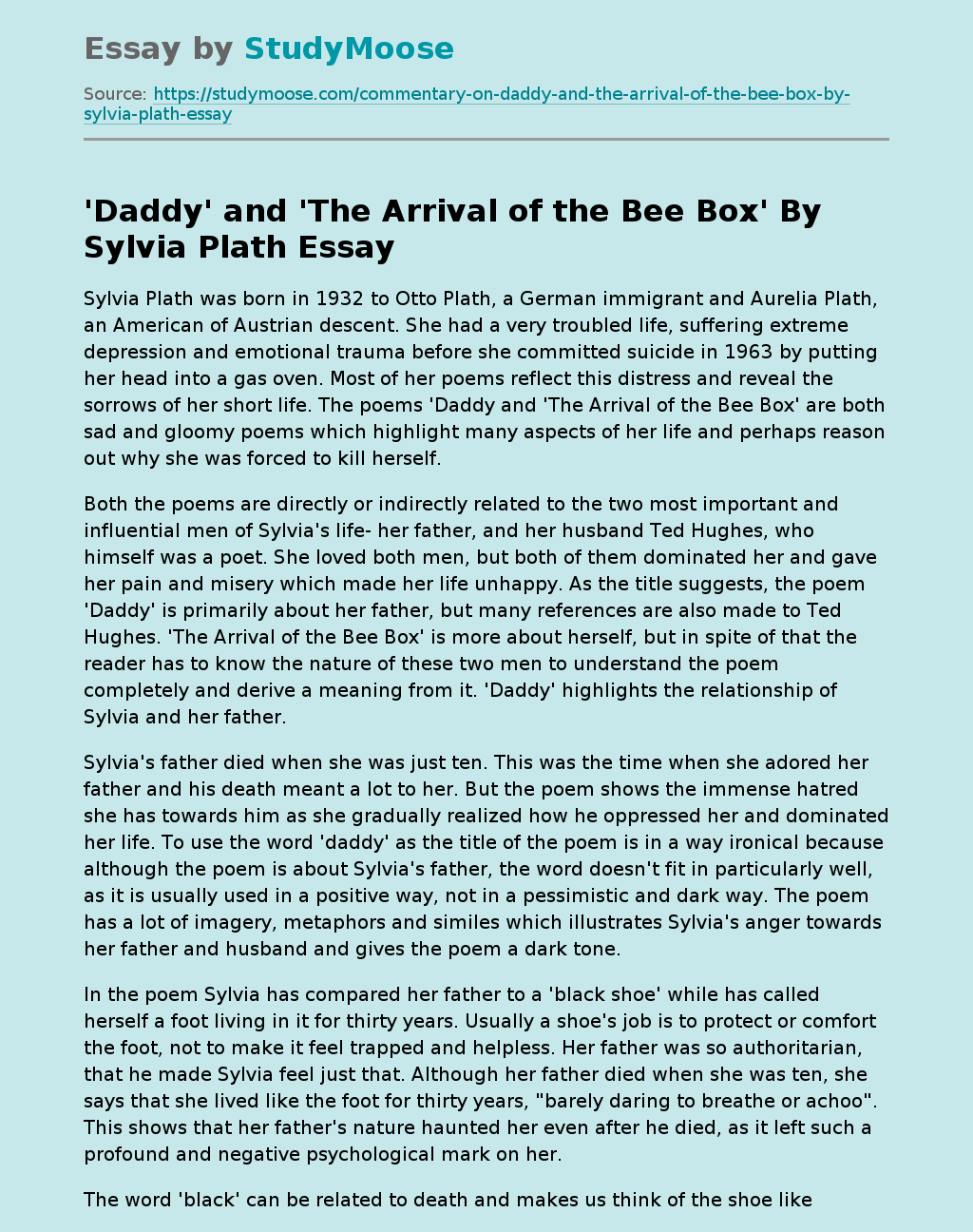