Sylvia Plath’s poem ‘Daddy’ expresses the struggle for female identity by basing it around the Holocaust, one of the most gruesome, immoral events in the whole of history. Plath uses this event as a metaphor for her struggles in life, and the struggles of women in general for independence. The male figure used in this poem is in the shape of Hitler, a man of unfathomable evil. In this poem, ‘Daddy’ is seen as a Hitler figure during the metaphor of the Holocaust.

Don't use plagiarized sources. Get your custom essay on
“ Identity Crisis in Daddy ”
Get custom paper
NEW! smart matching with writer

He is seen as oppressing the female population, and Plath as a figure in her poem, in comparison to the way Hitler oppressed the Jews. “Marble-heavy” is used to describe this figure, weighing down upon the females, making them struggle for female identity and independence. The adjective of “marble-heavy” signifies the way Plath felt her father was weighing down on her, causing her psychological pain and making her struggle through life, for freedom. Shadowing and oppression is shown through some of the description used to, perhaps, show the way she felt through her life.

“Ghastly statue with on gray toe”, her father is shown as casting a shadow over his daughter’s life, not allowing her to grow or become her own person. The adjective “ghastly” poses a threat and foreboding over the poem, allowing the reader to get a sense of what Plath must have felt through her life. “I thought every German was you. ” This line in the poem allows the reader to infer that Plath’s father was German, and that she was frightened of him…possibly due to her seeing him as the fascist dictator that was Hitler.

Linking to this would be the line, “Chuffing me off like a Jew.

” implying even further that she felt oppressed by her Hitler-like father, in the way the Jews did during the Holocaust in the 1940s. “I think I may well be a Jew. ” This backs up the metaphor of the Holocaust, as Plath is expressing her feelings of being part of a minority group, due to her being a woman. She feels like she must fight for her right to be independent, because of her oppressed past and the way she was treated by her father. Her fear of this ‘Daddy’ figure is expressed throughout the poem, in stanza nine she tells of this fear explicitly.

“I have always been scared of you” in which the reader can see that she was worried about fighting for her rights as a woman purely because of her being “scared”. The lexical choice of “scared” makes the reader question her life and the treatment of her by this male figure, possibly in her past, before he died. Stanza six, line two, “Ich, ich, ich, ich” uses the German word for ‘I’. The repetition of this word possibly highlights her struggles to talk to the ‘Daddy’ figure and express how she feels.

It could also be said to be representing a chocking motion, hindering her speech, showing relative frightened emotions of talking to this man. Towards the end of the poem, it becomes questionable who the male figure is that she speaks about in the poem. It could be related to her father or, to her husband, the poet Ted Hughes. There’s an element of marital explanation, “And I said I do, I do. ” This implies that Plath is speaking about her husband, telling the reader that she also felt oppressed during her years of marriage.

“If I’ve killed one man, I’ve killed two” This realization of actions lead her to believe that she was responsible for her father’s death, and possibly for “killing” Hughes, maybe psychologically and ruining her marriage when he left her and the children. “And drank my blood for a year,/Seven years, if you want to know. ” The drinking of her blood could be a metaphor for the control that was placed over her, and the time of “seven years” was the length of time that she was with Ted Hughes for.

Her oppression got to the point where she felt she was being drained of life, hence the line, “And drank my blood for a year”. This would be a way of maintaining control over the female, as vampires do to their victims, with them becoming their ‘slaves’ of sort…perhaps what Hughes wanted of Plath. Tenderness is shown by the writer when she says, “Daddy, you can lie back now. ” This perhaps shows her caring side, her grief over the loss of her father. She is finally allowing him to rest, leaving him be and letting him ‘sleep’.

This poem expresses the struggle for female identity and independence through the metaphor of the Nazi regime, showing the infection of men and their control over women, as that of the control over the Jews during the Holocaust. The controversial topic of the Holocaust shows the extent of which Plath felt the female population was oppressed and made to struggle through their ordeals due to the men not feeling they have any rights. The question of this being a love poem makes the reader think whether she enjoyed being oppressed by her husband, or whether it psychologically damaged her. 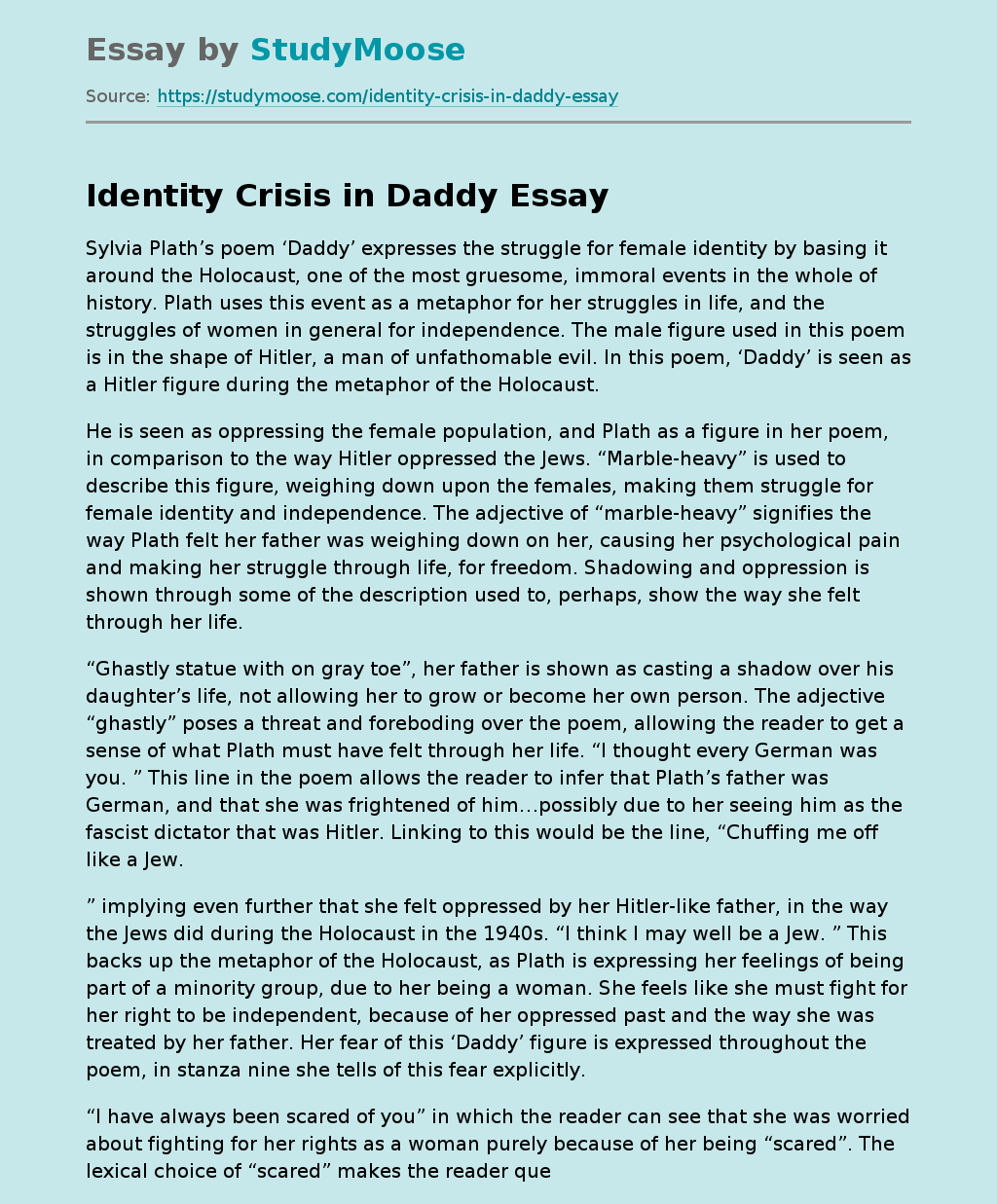