Poetry and the Marriage of Sylvia Plath and Ted Hughes

In the introduction of her book Her Husband: Hughes and Plath – a Marriage (2003), Diane Wood Middlebrook wrote that “poetry had brought Hughes and Plath together, and poetry had kept them together” (Middlebrook, n. pag.). Indeed, the marriage of poets Sylvia Plath and Ted Hughes is best described as a union of two talented but volatile personalities who both competed with and complemented one another through poetry. But this observation was often ignored due to the overly simplistic accounts of their marriage, especially those that focused on the period shortly before and after Plath’s death.

Don't use plagiarized sources. Get your custom essay on
“ Poetry and the Marriage of Sylvia Plath and Ted Hughes ”
Get custom paper
NEW! smart matching with writer

Hughes is almost always depicted in these explanations as a philandering womanizer, while Plath is shown as a clingy and overly paranoid wife (St. Clair, n. pag.).

A gifted writer, she published her poems in magazines and won literary awards since her teenage years. However, these accomplishments were overshadowed by her battle with mental illness (MSN Encarta, n. pag.).

Plath began to experience episodes of depression, insomnia and suicidal thoughts during her youth, all of which were possibly triggered by her father’s demise when she was only eight years old. In her junior year in college in 1953, Plath tried to kill herself by hiding under her house and overdosing on sleeping pills. She was afterwards confined in a mental institution for six months, where she was subjected to electroconvulsive therapy (ECT).

Plath’s later writings made a constant reference to her experiences with this treatment (MSN Encarta, n. pag.).

Plath made a temporary recovery in January 1954, allowing her to graduate from college and pursue further studies in England. While in Cambridge, she met Ted Hughes. Despite warnings from friends about his fickleness in relationships, Hughes and Plath fell in love with each other and got married in 1956 (Neurotic Poets, n. pag.). Their first child, Frieda, was born in 1960, followed by Nicholas in 1962 (MSN Encarta, n. pag.).

At first, Plath and Hughes enjoyed a happy marriage. Theirs was a relationship that was “fueled by their joint passion for poetry” (John-Steiner, 136). For Plath, Hughes was not just a husband – he was a father figure who can fill the void caused by the premature death of her real father. She revealed this sentiment in an undated letter to her mother, Aurelia:

We read, we discuss poems we discover, talk, analyze – we continually fascinate each

other. It is heaven to have someone like Ted who is so kind and honest and brilliant

always stimulating me to think, draw and write. He is better than any teacher, he even

fills somehow that huge, sad hole I felt in having no father. (137)

As a result, Plath idolized her husband completely. She had so much faith in his ability as a poet that she worked very hard to have his poetry published in English and American magazines. But according to Vera John-Steiner’s book Creative Collaboration (2000), Hughes’ feelings towards his wife’s efforts was not established (John-Steiner, 137).

Unfortunately, later accounts of their marriage implied that Hughes was suffocated with Plath’s excessive clinginess. His sister Olwyn recalled that “he could not go on the simplest of errands without her grabbing a coat and running after him” (John-Steiner, 137). Consequently, Plath and Hughes fought often and the latter had an extramarital affair with a married woman named Assia Wevill (Neurotic Poets, n. pag.). He eventually left her for Wevill in 1962 (MSN Encarta, n. pag.). Plath described the stormy condition of their marriage before their separation in her poems Words heard, by Accident over the Phone, Poppies in July and Burning the Letters (Neurotic Poets, n. pag.).

Plath and her children moved to London in December 1962. She wrote poetry at a feverish pace during this period, with an output of more than 25 poems. What made these poems – which included A Secret, The Applicant and Daddy – noteworthy was that they contained Plath’s brutally honest opinions about her marriage and her father’s passing. In January 1963, her semi-autobiographical novel The Bell Jar was published under the pseudonym Victoria Lucas (Neurotic Poets, n. pag.).

Despite these literary accomplishments, Plath’s depression worsened. She killed herself in the early morning of February 11, 1963 by putting her head inside a gas oven (MSN Encarta, n. pag.).

It would be fair to say that Plath and Hughes used poetry to asses the effects of their tempestuous marriage on themselves. The Applicant, for instance, revealed Plath’s anger over what marriage does to a woman:

But in twenty-five years she’ll be silver,

A living doll, everywhere you look.

It can sew, it can cook,

For Plath, marriage and or domestic relationships condemned a woman to a “living death” (Dobbs, 11). When a woman marries, her “worth” will be based on how well she takes care of her family. In effect, she is almost similar to a dead person because her identity as an individual is replaced with that of a wife and a mother.

The Applicant was probably based on Plath’s dilemma as to whether she should still pursue careers in the academe and in writing even if she was already married or just resign herself to being a full-time housewife. Letters to and the remembrances of friends and family members revealed this conflict. Although Plath was able to maintain a balance between work and family life, she resented her family for making demands that drained her creativity. But at the same time, she felt guilty for harboring such bitterness – her husband left her for another woman probably because she didn’t spend enough time on him. It must be noted that one constant source of their disagreements was that Hughes wanted Plath to stop working and take care of their children instead (Dobbs, 13).

Words heard, by Accident over the Phone, meanwhile, is an account of Hughes’ affair with Wevill:

Speak, speak! Who is it?

O god, how shall I ever clean the phone table?

They are pressing out of the many-holed earpiece, they are looking for a listener.

According to some accounts, there was an instance when Plath heard the phone in their house ringing as she returned from a morning outing with her mother. When she answered it, it was Wevill, trying to disguise her voice. After Hughes finished talking to Wevill, Plath was so upset that she unplugged the phone wire from its socket. It was only during that incident that Plath realized that her husband was having an affair (NeuroticPoets, n. pag.).

Burning the Letters showed Plath’s rage over the said discovery:

I made a fire; being tired

Of the white fists of old

Letters and their death rattle

When I came too close to the wastebasket

What did they know that I didn’t?

Plath was said to be so upset over Hughes’ affair with Wevill that she tore up and threw into the fire the manuscript of the novel that she had been working on (the sequel to The Bell Jar). She also burned all the letters that received from her mother, as well as Hughes’ letters and drafts of poems (NeuroticPoets, n. pag.).

Hughes has often been blamed for Plath’s death. This was fueled largely by the women’s movement of the 1970s, which strongly identified itself with her life and poetry. For decades, Hughes kept silent regarding his former wife’s passing. But in 1998, he published Birthday Letters, a collection of his poems that focused on his relationship with Plath and her sad fate.

Hughes implied in most of his poems that one of the reasons for the failure of his marriage to Plath was their incompatibilities in terms of personal success. Being the daughter of educators, Plath grew up adhering to conventional standards of achievement. Accounts of her life gave the impression that she wanted nothing more but to establish herself both in writing and in teaching. Hughes, on the other hand, felt suffocated at the idea of a tenured academic job (Rees, n. pag.).

Hughes echoed this sentiment in The Blue Flannel Suit. This poem mockingly described Plath’s nervousness during her first day as an English lecturer in her alma mater. In order to project the respectable image of an academic, she wore a badly-tailored suit that she made by herself. Looking back at this incident, he wrote:

But in A Picture of Otto, Hughes lamented that he and Plath separated primarily because he was not able to take the place of her father, Otto, in her life. For him, Otto was

inseparable from my shadow

As long as your daughter’s words can stir a candle.

In the end, Hughes finally accepted that Plath will always be her father’s daughter:

you never could have released her.

I was a whole myth too late to replace you.

This underworld, my friend, is her heart’s home.

Human relationships are too complex for their failure to be attributed to just one person. While Hughes may have his faults, Plath was already a disturbed character even before their marriage. Their poetry was just a reflection of a couple, who, despite their fame, underwent the travails of any other failed marriage. Hence, the works of Hughes and Plath should not be used as additional fodder to continue a battle of the sexes that was blown out of proportion.

Poetry and the Marriage of Sylvia Plath and Ted Hughes. (2016, Nov 22). Retrieved from https://studymoose.com/poetry-and-the-marriage-of-sylvia-plath-and-ted-hughes-essay 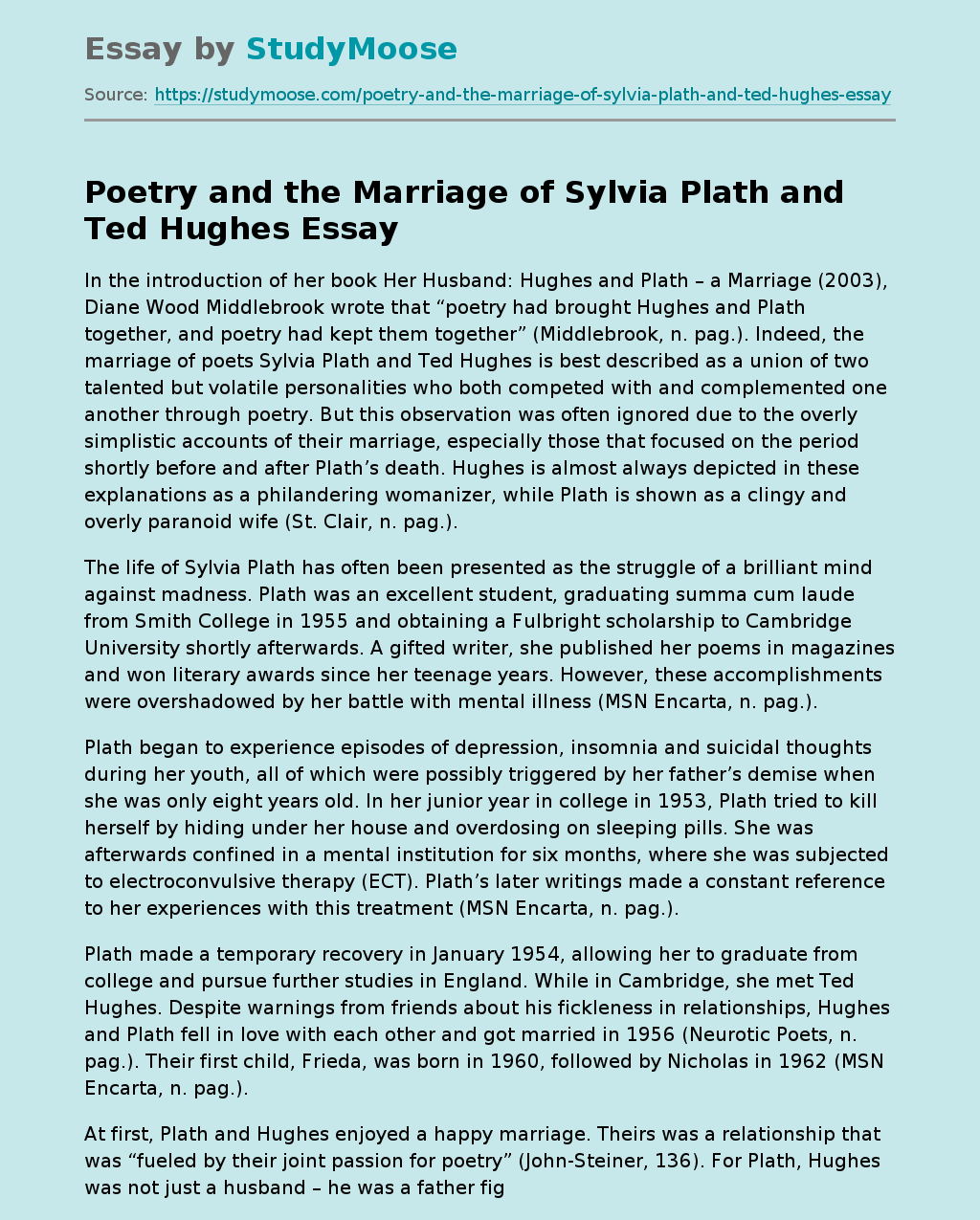