Sylvia Plath is well known for her confessional style of writing. Her poem ‘Metaphors’ was written in the 1960’s and expresses her self-loathing during pregnancy. Unlike many poets, Plath isn’t afraid to express her inner feelings throughout her work and explore herself within her poetry. In her poem ‘Metaphors’ Plath uses the ‘I’ voice to make her writing deeply personal and convey her pessimistic attitude towards her body image during pregnancy.

‘Metaphors’ is written in a single stanza structure consisting of nine lines each containing nine syllables.

Don't use plagiarized sources. Get your custom essay on
“ Metaphors by Sylvia Plath ”
Get custom paper
NEW! smart matching with writer

Nine is a recurring and significant number in the poem as metaphor and pregnancy both have nine letters and ‘I’ is the ninth letter of the alphabet. It also may be an underlying reference to the nine months of gestation during pregnancy and the impact pregnancy is having on Plath. The poem is written in the form of blank verse without any regular rhyming pattern; however the meter remains consistent with 9 syllables in each line.

Plath creates shockingly vivid imagery of her heavily pregnant body and child within; “An elephant, a ponderous house.” She uses the word “ponderous” to create an image of her large, lumbering heavily pregnant body and “house” to show that she is sheltering something precious within. Plath also compares herself to the humorous image of “a melon on two tendrils.” This makes the reader picture a heavy, round image staggering on two frail, weak legs. The writer’s constant comparison to humorous, ugly objects such as “a big loaf” and “a fat purse” highlight the extent of her depression and self-loathing.

Although Plath compares herself to a large, unattractive being, she places great value on her unborn child’s life and compares it to many beautiful, valuable objects; “ivory” “fine timbers! She uses comparison between the beautiful baby contained within her and her own self-image; “Money’s new-minted in this fat purse” which clearly represent the ugliness she sees in herself, concealing her precious child within. The writer claims to be; “a means” where the child will thrive and grow until birth, “a stage” for her child to develop and grow within and “a cow in calf” which emphasizes the self-loathing she feels towards the change in her body.

In the second last line on the poem, Plath says; “I’ve eaten a bag of green apples” which could be a reference to the Bible and the apples that tempted Eve in the Garden of Eden and how her over-indulgence followed by painful consequences are a biblical reference to original sin. Plath compares her situation to that of Eve’s, she believes that she too indulged in the sensual pleasure of over-indulgence and is now facing the consequences of her actions. On a more literal level, it may also be that she has over-eaten and feels bloated as this is often common among pregnant women.

Plath ponders what the uncertain future holds for her in her last line; “Boarded the train there’s no getting off.” She implies that the pregnancy is too far advanced to be terminated and she is solely responsible for the new life within her. As the poem progresses, Plath begins to feel helpless towards the last weeks of her pregnancy, facing an uncertain future and she has no control over the outcome.

The overall tone of ‘Metaphors’ is a pessimistic one which highlights the extent of the poet’s self-loathing and depression. This may be related to mental health issues the fragile poet suffered from. Plath’s distorted self-image combined with the love she feels for her unborn child and her uncertainty of what the future may hold for her come together to produce a beautiful, highly emotional poem. She successfully incorporates striking yet shocking imagery to engage the reader into her deepest thoughts and feelings and almost sympathise with her situation. Plath leaves us pondering what the future holds for her through her extremely heart-rending, thought provoking poem. 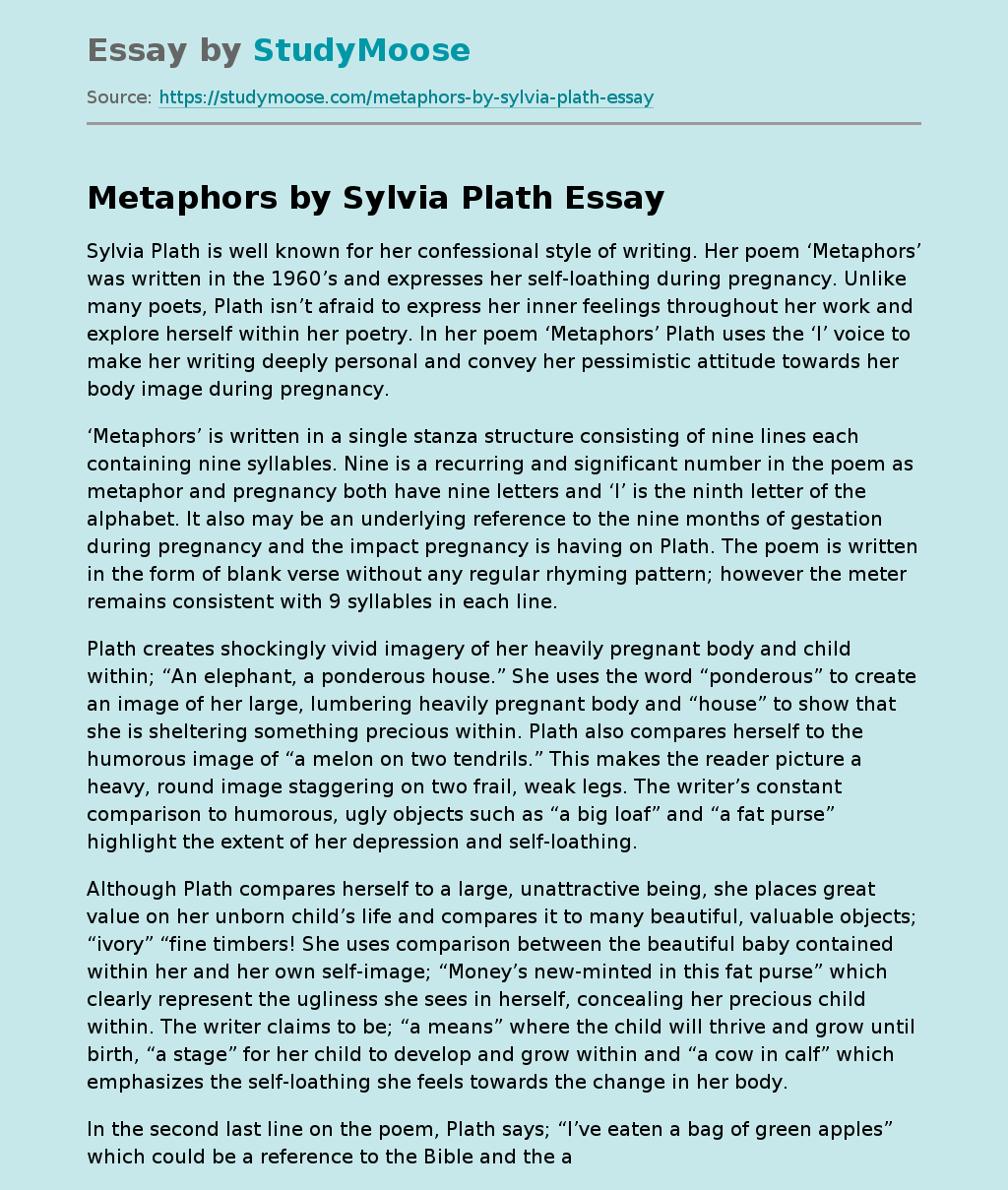