Self Reflection in Mirror by Sylvia Plath

Sylvia Plath is the author of the poem “Mirror”, written in the early 1960s. Plath had a history of severe depression due to her father’s death when she was a child and her failed attempts of suicide throughout her life. Many of her poems reflect her emotions, whether they are sad, angry or depressing, and “Mirror” is one of those poems. “Mirror” deals with the topic of a woman’s self-consciousness and her vanity in a way that is unusual, yet very effective to the reader.

Don't use plagiarized sources. Get your custom essay on
“ Self Reflection in Mirror by Sylvia Plath ”
Get custom paper
NEW! smart matching with writer

Part of the unusual aspect of this poem is that the entire piece is written from the perspective of the mirror.

This is just one example of the personification used in “Mirror”. Another example is “The eye of a little god” which contains the woman’s vanity in the way that it is almost a self-worshipping and the fact that the mirror is a very powerful item. This one line depicts the woman’s view of what the mirror is to her and her image.

The mirror is given many different actions throughout the poem. For example, “I meditate on the opposite wall” and “I have looked at it so long” both describe the mirror performing very human actions and this gives the mirror a personality.

The impact on the reader is one of interest and curiosity and this continues throughout “Mirror” when the theme of personification is explored even further. The mirror is claimed to be “exact” and “truthful” in this piece. There is a word in almost every line that continues this theme until the reader gets to line 14: “She rewards me with tears and an agitation of hands”.

There are a few interesting techniques used in this to make the reader question the truthfulness of the mirror. For example it is an oxymoron as tears are usually regarded as a bad thing and to be rewarded is usually something good.

Just those five words make the reader think that the mirror could potentially have emotions, and a dark side. The impact on the reader at this point is huge as the mirror’s personality is not only one of cruelty but it had been lying and saying it was fair. The words “I am” are repeated several times in the poem and is another example of personification as the mirror is not a being yet it is still calling itself “I”. This shows that the mirror is very important and thinks highly of itself, yet further continuing the personification.

A woman appears in this poem and is similar to Narcissus, who stared at his reflection in a river and didn’t dare touch the water or go away in fear of losing his image. He eventually died of thirst due to his own vanity. The woman clearly treasures the mirror and the mirror knows this: “I am important to her” and she is said to repeatedly use the mirror many times a day for quite a while, as shown by the references to a great passing of time in “she comes and goes” and “day after day”.

Plath uses this form of repetition very well in describing a passing of time and making it seem as if no time had passed at all for the reader which leaves an impact. The woman isn’t mentioned until the middle of “Mirror”, when the mirror personifies itself as a lake and that the woman was “bent over it”, which is yet another link to the Narcissus myth. Shortly thereafter, the poem describes the candles and the moon as “liars” as they only shed a little light upon her features and don’t show every little detail as the mirror does.

When the woman observes her own reflection in the mirror she was very distraught and started crying which shows the reader that she didn’t like the way that she looked and went back every day to try and discover what she really was on the inside. However, the line that has the largest impact on the reader are the very last lines of the poem: “In me she has drowned a young girl, and in me an old woman Rises toward her day after day, like a terrible fish. ” These lines – especially the final one – make the reader shocked and horrified at the woman’s horrible self image.

For someone to think of themselves as a terrible fish is almost unimaginable yet the woman feels so strongly about this image that she is openly admitting that she looks like one. Additionally, these two lines continue on with the original themes of the poem to counteract that phrase. “In me she has drowned” is an extended metaphor of the lake description and “day after day” continues the theme of time passing by quickly. As previously explored, Plath has used many powerful poetic techniques to have a huge impact on the reader.

Although it is a short poem – only 18 lines – it perfectly outlines the themes of vanity and superficiality and the pain this can cause a person. The unusual narrator in this poem gives the reader an entirely different viewpoint on vanity: what it actually looks like from an unbiased source. The poem outlines many aspects of vanity and all of its cruel components that makes the reader contemplate what it really means to be vain. An obvious effective technique used was personification; of the mirror and the candles and the moon.

This gives the reader a sensation that an animate object is narrating when it is only a mirror: something so simple and ordinary that it completely changes the perspective of the poem. To conclude, “Mirror” is a very powerful piece of literature that was written with great expertise. Plath successfully used many poetic techniques and utilised them effectively. Both the style in which it was written and the narrator deal with the topic of self-image very well and gives the reader a great impact.

Secondly, the use of the surprising language in the poem had a great effect. The word “fish” at the end is completely different to the rest of the poem which makes it stand out greatly. The reader doesn’t expect such a vulgar description of the woman and that impact is also huge. Finally, the message portrayed in “Mirror” was delivered very well. It says that we should look beyond the superficial and value what we are on the inside, something that Plath had struggled with over her life.

Self Reflection in Mirror by Sylvia Plath. (2017, Feb 03). Retrieved from https://studymoose.com/self-reflection-in-mirror-by-sylvia-plath-essay 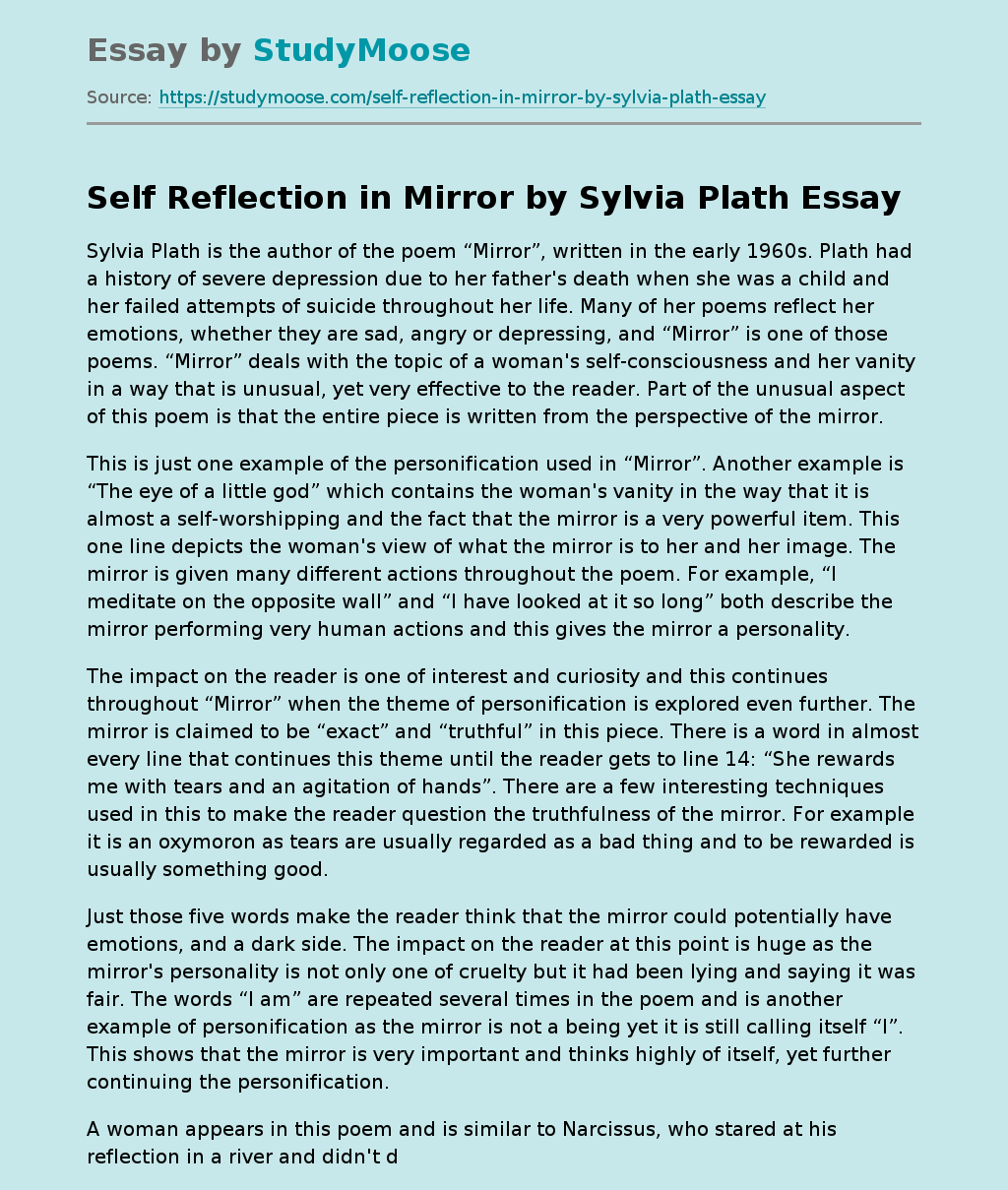