A Poem Mirror by Sylvia Plath

The poem “Mirror” by Sylvia Plath is told from the point of view of a mirror hanging up on a wall. This mirror has, over time, been privy to the tears of a woman over who she sees in it, desperate grasps at moonlit lies, and the endless speculations of a pink with speckles wall. “Mirror” is a poem that probes into the corners of human nature, beauty, life, and death, reflecting back their truths to readers as good mirrors do.

Don't use plagiarized sources. Get your custom essay on
“ A Poem Mirror by Sylvia Plath ”
Get custom paper
NEW! smart matching with writer

In this poem, readers can see the truth about themselves reflected among the words as though the poem itself is a mirror, too. Just as the poem reflects truths to readers, so the mirror in it reflects truths to the woman it sees every day. It is objective about everything it observes in the woman, for it can have no biases simply owing to the nature of its stature. The description the mirror gives of itself in the first few lines is that “I am silver and exact.

I have no preconceptions./Whatever I see I swallow immediately/Just as it is, unmisted by love or dislike./I am not cruel, only truthful-/The eye of the little god, four cornered.”

It is giving, true to its nature, a frank description of itself—nonjudgmental and unprejudiced of its admirers. Mirrors never have and never will pass any judgment on their gazers. They leave that for the gazers themselves to do, and they always do just that, as is human nature.

The mirror prides itself on that same clear-cut honesty of the faces it regurgitates back for judgment. It is almost arrogant about it, refusing to falter in its own perfection for a moment, even as “she turns to those liars, the candles or the moon” which cast false shadows upon her face. It continues to reflect the woman honestly, even though she cannot see it, so that when she learns of the lies and turns back, there she is in all her self-perceived imperfection. Not one person, the woman of the poem included, has ever been judged by a mirror, but rather through it. It is because of it that the woman can see her outer self, so also because of it, she sometimes forgets her inner self.

She forgets the pink behind the speckles on the wall of her face, seeing only that the speckles are marring the beauty of it. The mirror, however, does not see the destruction the woman sees, for she is the only one of the two who has the desire to judge. She was the only true master of herself, but she ended up caving in under her preconceived notions of society’s view of her. She became a slave to the mirror and her interpretations its truths. One of these truths is age. No one has yet achieved immortality, and so death is still a formidable foe. Mirrors reflect the coming of this rival in the rivulets and creases found in a face of age, and many people obsess over this manifesting. In the poem, according to the mirror, “I am important to her. She comes and goes./Each morning it is her face that replaces the darkness./In me she has drowned a young girl, and in me an old woman/Rises toward her day after day, like a terrible fish.” The woman in the poem “has drowned a young girl” in her obsessions, aging her into “an old woman . . . like a terrible fish.”

With each day, the manifestation becomes more pronounced because “Each morning it is her face that replaces the darkness.” She wasted away in front of that mirror so that now, death “Rises toward her day after day, like a terrible fish.” She hates the mirror’s honesty on the matter, but cannot turn away. She is unable to resist knowing that death is creeping ever closer every day. She lives her life, it seems, around that knowledge, convinced that she should not be as she is. She is, as the poem says, “Searching . . . for what she really is.” She is unaware that all around her, death is marking others down for capture with the lines of age.

All she knows is that she has gone from “pink, with speckles” into a world of darkness that she disapproves of seeing in the mirror. She does not seem to under stand that in fact, no one will be left unaffected. “The eye of the little god” will seek out everyone from all four corners of the globe. In the end, her obsession kills her, the “terrible fish” having finally made it to the surface. The woman in the poem lives and dies within it, mirroring any and all readers’ lives in that. The poem offers up a universal reflection of a person for readers to judge themselves. After all, it is a mirror and that is what mirrors do.

A Poem Mirror by Sylvia Plath. (2016, May 12). Retrieved from https://studymoose.com/a-poem-mirror-by-sylvia-plath-essay 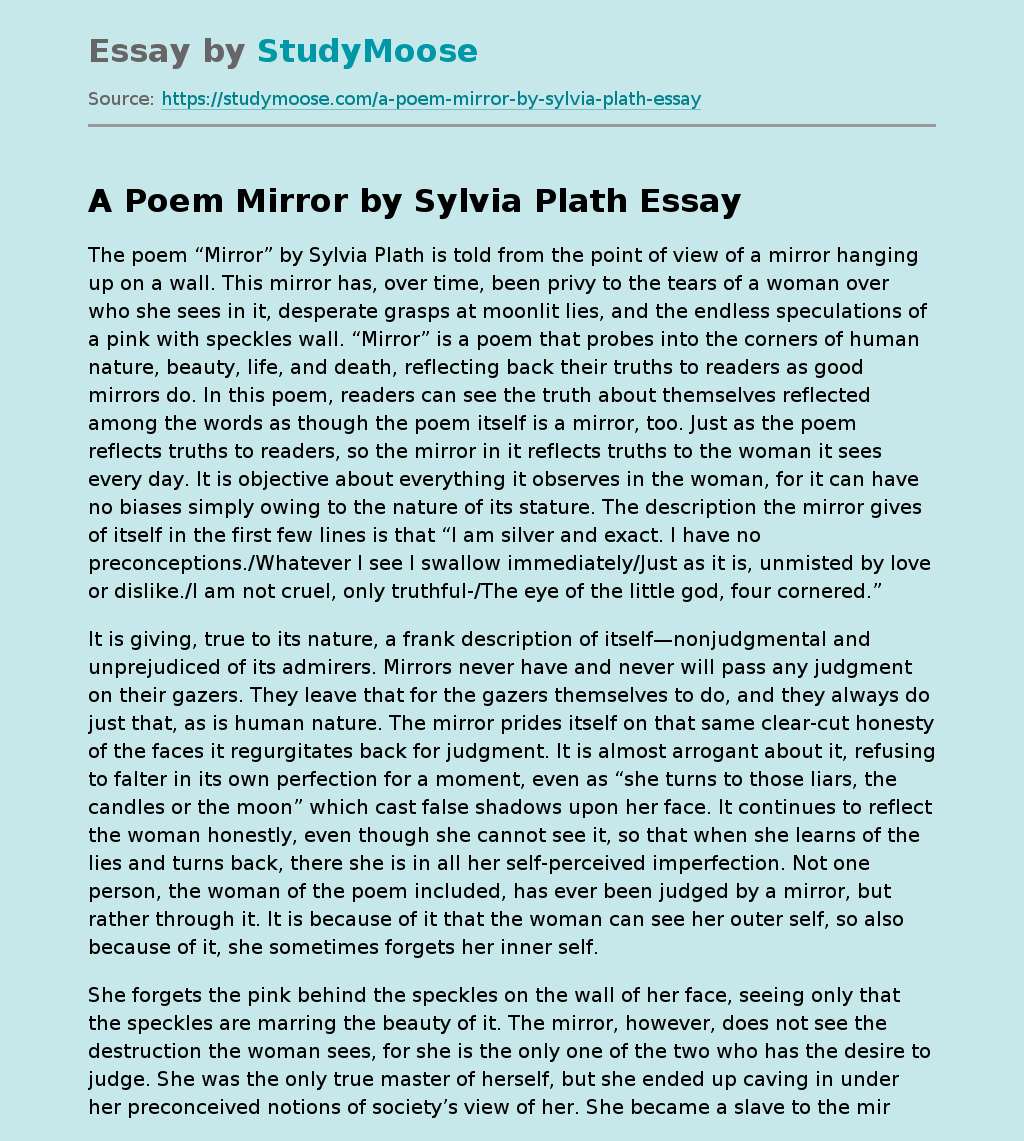