Sylvia Plath was born in 1932, and she grew up in Boston. Plath was precociously intelligent, and by the time she was eight years, she published her first poem (Rosenblatt). She was a divisive individual due to her controversy, which is depicted in her poem The Applicant. In the poem, the applicant is a portrait of contemporary marriage in western culture. In the poem, Plath creates an atmosphere that communicates the social stereotypes and oppression of women in marriage.

Don't use plagiarized sources. Get your custom essay on
“ The Social Context of Sylvia Plath’s Late Poems ”
Get custom paper
NEW! smart matching with writer

She condemned how society instigated women to marriage and compete among themselves for the attention of men. The `applicant’ who is a male is a metaphor that describes what men need from women for their daily satisfaction; that is the characters a lady should attain that men desire and finally marry them.

When the interviewer ‘brings something out of the closet,’ clearly outlines how women were viewed as objects like robots, and they only existed to sooth men and make them forget their sorrowful days.

Sylvia Plath had the will of being a good wife and later a good mother; however, she submitted on her marriage after deserting her principle on proto-feminism. The marriage could not last for long even though she was already determined to make it better, and Plath felt her principles were betrayed, and her spirit of writing re-emerged.

The poem The Applicant describes the social injustices that that had inflicted the society in the 20th century. When Sylvia Plath ventured in writing the poetry, social movements had emerged, and they were seeking and demanding freedom of women that is both equal rights and opportunities (Rosenblatt).

The period was in the 1960s to early 1970s, and it is described as the second enforcement of feminism. The first wave of feminism was during the 19th century, where social movement emerged, protesting women also to take part in legal processes, mostly voting. The second wave of feminism was the strongest and successful due to the rise of female elites in western countries.

In the Applicant, the interviewer would give the applicant `a hand from the closet’ who is a woman, and the interviewer would point the woman as `it’ all through the conversation, creating a deceiving character about women. In 1963, Betty Friedan`s published a book called The Feminine Mystique. In the book, she outlines the dissatisfaction women in the American society were undergoing after the end of World War II. Friedan called the book the feminine mystique to describe the assumptions that existed in the community about women being the workload of the society. During the publication, Betty criticizes the postulation of women finding fulfillment in marriage, housework, rearing of children alone, and also sexual passivity.

Betty Friedan was among the women elites who advocated for change from the previous view about women in society. She said the decisive perception of women in society during the 19th century was not suitable for societal growth. She then prevailed the discernment that true feminine came from women who would not seek higher education, political voice as well as careers and that they could only find fulfillment in their domesticated spheres. During the 1960s, Friedan would see that even the housewives were not satisfied with the kind of life they were living. She could also note the feminine found it difficult in articulating their feelings, making them live an unhappy life, thus hindering them from reaching the female mystique.

The Friedan book that was published in1963 energized women to join forces with the leaders of the social movements and government representatives. The government representatives who were joined by the women were the ones who advocated for equal pay, and also protection of women against employment prejudice. In 1966, their polite request to the federal government failed and that they would need a better organization to present their demands effectively. Later in 1966, the National Organization of Women (NOW) was formed.

Unfortunately, once the organization took the course, it was not marked with success at first. The organization had over a thousand citizens though division of ideologies influenced the group. However, individuals in the organization focused on revolutionary as it was the main reason for its formation. They went ahead and wrote a Bill of Rights just for the women, and six measures were outlined that would lead to equality among women (Shirley). The consensus written included the laws that enforce employment discrimination to be banned, Right for every woman to undergo maternity leave, Establishment of child-care hubs, deduction of childcare expenses for the women to afford the cost, an unsegregated and equal offer of educational services as well as equal offer of job training services. The six demands were very vital for the support of American women, and it would lead to a great revolutionary act ever in American history.

Consequently, the six demands from the NOW written Bill of Rights being essential for the federal government to implement, the organization was not satisfied until the Equal Rights Act was amended (Shirley). The Equal Rights Act amendment mainly focused on invalidating the states and federal laws which advocated for women discrimination. The unratified amendment would enable both women and men to be given equal gratification despite their sexual differences. Within one year, the Act was ratified in 30 states, and it`s described as the Equal Rights Act amendment of 1972. Despite opposition from conservative political and religious organizations, the endorsement of the Act came to stand still in the 30 states. The conformists of the Act, who were the religious and political personnel, feared that the amendment of the Act would make women lose both protection and privileges from both their families and the government. The privileges women would lose after the amendment included: less or lack of economic support from their husbands, and also they would be exempted from the military services and combat duty that are compulsory for the citizens. However, the National Organization of Women concluded that the issue would only major on economic purposes.

In conclusion, the government has been ensuring the rights of the feminine are met through the series of interactions with the liberal social movements. The Equal Employment Opportunity Act of 1965 gave women more job opportunities in both the public and private sectors. It’s from the Employment Act that women gained clout, and during the social justice movement that they made other women protest for their rights confidently (Elinor). Women were given top opportunities in the employment sector and employers who were recorded to have a more extended history of discrimination in their businesses; they were required to come up with timetables that would see women getting employment chances. The revolution leads to the linearization of divorce; bosses were prohibited from firing pregnant women; instead, they were to be given peaceful maternity leave. In education, women were given more chances in educational sectors, and they were provided with better studies programs. In 1973, the United States of America Supreme Court made it legal for women to abort that was after a controversial Supreme Court ruling on Roe Wade.

Sylvia Plath is among the women who were recorded in the history of women’s social movements that lead to gender equality in the American Society. Through her writings, she inspired women to open up their minds and seek equal opportunities in society rather than men being the privileged beings in society. Sylvia Plath committed suicide in 1963. Since the second wave of social justice movement that took place up to 1970s, the third and the fourth enforcement on the rights of women has been taking place in the 21st century. The change from a gender biased society to the current world has been due to education as well as globalization. Women are now struggling to become top leaders, for Instance Hillary Clinton during the presidential race in 2016. Hillary struggled during the campaigns and she was gladly accepted by the American society during her period and she had a higher probability of winning the race. Even though she did not win, she was a true inspiration to other women that the journey towards a free gender biased society is on the run to success. 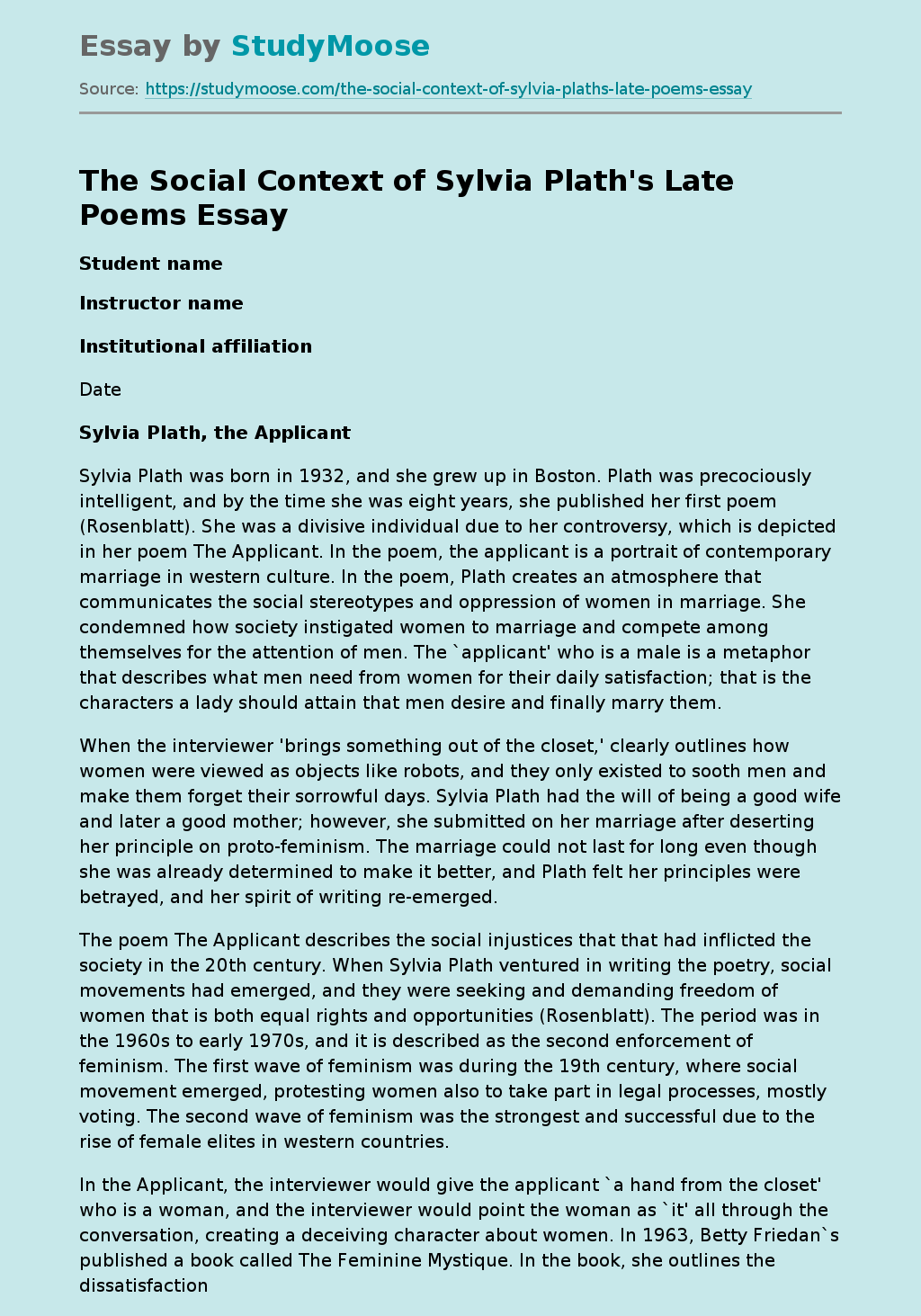