Sylvia Plath is an American writer whose well-known poems are carefully written pieces distinguished for their personal imagery and intense dialogue. Written in 1960, “Point Shirley” is a poem in which the details are more important than the actual time and place that the events occurred.

Sylvia Plath is an American writer whose best-known poems are carefully crafted pieces noted for their personal imagery and intense focus. She was born in Massachusetts in 1932 and began publishing poems and stories as a teenager.

Don't use plagiarized sources. Get your custom essay on
“ “Point Shirley” by Sylvia Plath ”
Get custom paper
NEW! smart matching with writer

By the time she entered Smith College, Plath had won several poetry prizes that led to her becoming a Fulbright Scholar in Cambridge, England.

However, on February 11, 1963, Sylvia Plath committed suicide due to problems existing within a troubled marriage. Her novel, The Bell Jar, was first published under her own name in the United States in 1971, despite the protests of her family. Plath’s Collected Poems, published in 1981, won the Pulitzer Prize.

Throughout her short life, Plath loved the sea.

She spent many of her childhood years on the Atlantic coast just north of Boston. This seascape provides the source for much of her later poetic imagery, among these is “Point Shirley”.

In Sylvia Plath’s “Point Shirley,” she tries to create a vivid image in the reader’s mind as to what the New England coast looks like. In doing so, she sends a depressing image that helps to set the tone for the next stanza where her grandmother is found dead. In the absence of the grandmother, the sea is slowly breaking down the house.

Although the aggressive sea is unable to destroy the house in the grandmother’s presence, it does begin to wear down after the absence of the grandmother sets in.

The title of the poem is simply to let the reader know where the story is taking place. However, it is not very important if the exact location of the poem is known, because Plath’s purpose for writing the poem can still be expressed without knowing this. The title does show a hint of what the poem is about, however, because any location name that is preceded by the word “point” can usually be assumed to be on the beach.

Throughout the poem, Plath describes the sea in a way that makes it seem alive. The ferocity of the sea seems to be purposefully tearing down the house. This type of personification allows the reader to develop the idea that there is nothing to stop the sea and that, over time, the house and memory of the grandmother will be gone.

Sylvia Plath is obviously very upset with the death of her grandmother and is using her poetry to express her feelings about her. She labels her grandmother as stubborn but loving, and does not ever want to forget her. However, as time passes, the memory of the grandmother is fading away along with the house.

As a reader, this writer can personally identify with the setting of this poem, as I have grown up on the New England coast. For example, I can relate with the quahog chips mentioned in the first stanza because they covered many of the beaches I frequented as a child. The vivid details used to describe the rough sea reminds me of the many stormy days that I lived on the beach as the waves crashed against the beach. I believe that being able to identify with the setting helps the reader feel the emotion that Plath is trying to express. 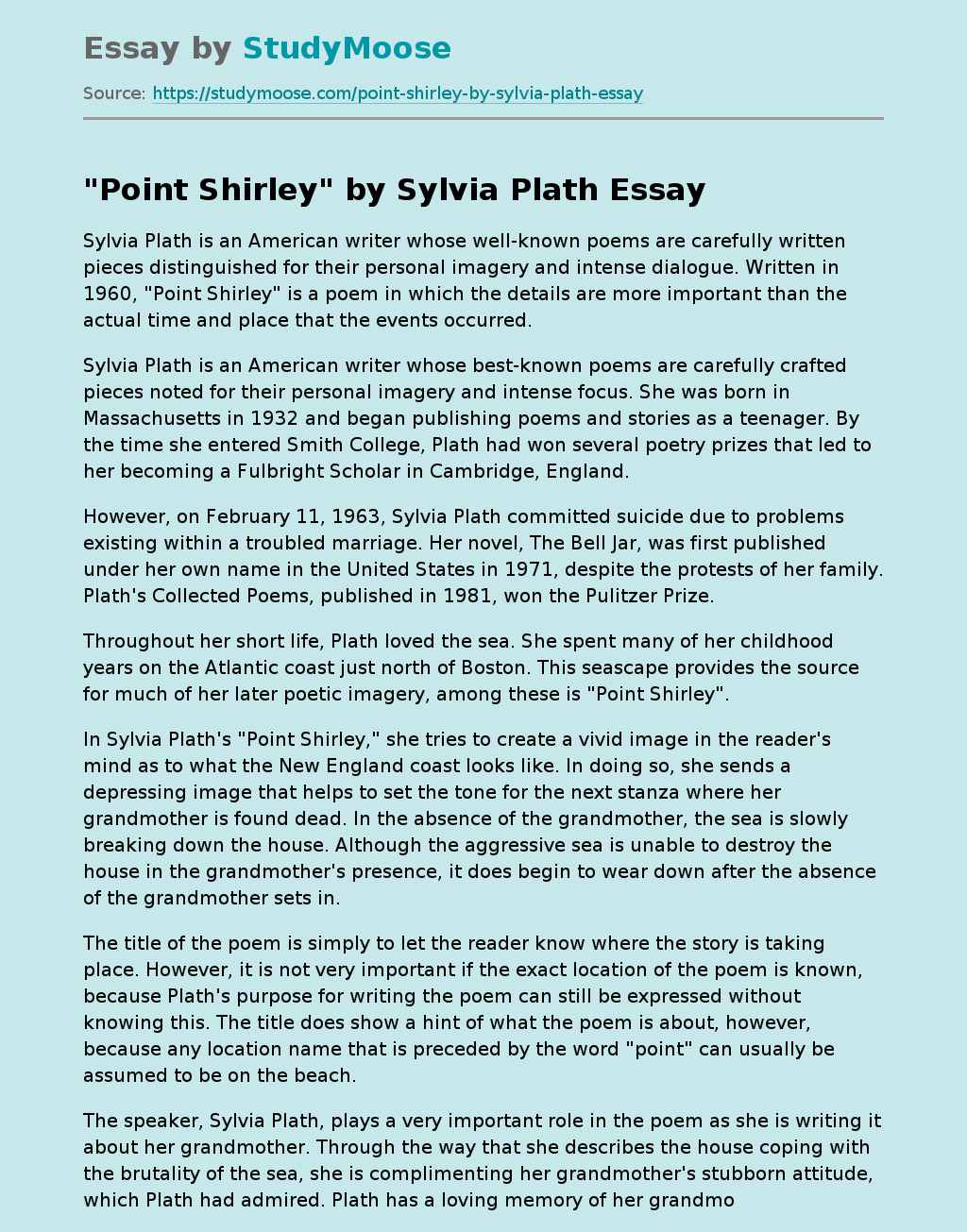