Sylvia Plath’s poem “Two Campers in Cloud Country” displays tones of naturalization and of objection to society. The speaker expresses his distaste for the mundane life and his respect for nature by incorporating style with literary devices. In Sylvia Plath’s poem “Two Campers in Cloud Country” the speaker uses diction and figurative language to portray attitudes of mockery towards civilization and awe towards the freedom of nature. First, the speaker opens the poem by saying “In this country there is neither measure nor balance” (l.

Don't use plagiarized sources. Get your custom essay on
“ Contrasting Attitudes in Two Campers in Cloud Country by Sylvia Plath ”
Get custom paper
NEW! smart matching with writer

This is important when considering the diction because the plosive sounds give the reader a subconscious understanding of how the speaker feels. For example, the word “gesture” (l. 4) presents the naturalistic view on how insignificant people are in comparison to the clouds. As seen in line six, “trolls” also is used for a sound device coupled with negative connotations. Another example of coupling plosive sounds with negative connotations would be “Public Gardens” (l. 7). The plosive sound devices are purposefully placed by the speaker to create a more apparent dissatisfaction in his diction.

More often than not the speaker makes blatant statements towards the harsh and confining life in the city. By stating “one wearies of the Public Gardens” (l. 7) the speaker is deliberately pointing to the civilization’s tedious lifestyle. In line 17 the speaker says “It is comfortable, for a change, to mean so little”. This implies that the speaker’s bondage to society is broken by the freedom of nature. More subtly are sardonic inserts used to portray the speaker’s mocking tone. For example, “Here on the last frontier of the big, brash spirit: (l. 12) displays a tone of sarcasm towards how cities may view themselves.

Whether it is blatant or subtle, the speaker delivers his attitude of mockery through diction. Second, the speaker expresses an attitude of awe towards nature after a tone shift. The tone shift in the beginning of stanza five changes from that of sardonic to admiration. The speaker describes the horizons as being so beautiful that “the colors assert themselves” (l. 14). Not only does this give an appealing and vibrant connotation. It shows respect for nature’s ability to be independent and control itself with or without the encouragement of man. In line 19 the speaker describes the rocks as “conceiving a dynasty of perfect cold”.

To those who are not like the Two Campers this may be an oxymoron; to the Two Campers it deems true. This quote also shows how the speaker finds refuge in the outdoors. The tone remains to be in veneration but shows more dreamlike characteristics when the speaker announces “Tell me I’m here” (l. 21). The tone’s tendencies to be rather naturalistic become more apparent in the final two stanzas of the poem. The speaker also uses sound devices to exhibit the comfort of nature. Soft sounds such as “simplicities sough” (l. 25) and “Sleepily as Lethe” (l. 26) make lulling and peaceful sounds.

Another soft sound used by the speaker is “lightest sighs” (l. 24). These sounds are comforting to the reader and are deliberately used to create a subtle liking for nature as opposed to the plosive and harsh sounds of the city. The tone shift of stanza five gives way to an important attitude of awe that the speaker portrays with his diction. Another way the speaker portrays the initial attitude of mockery is through figurative language. The speaker uses personification to contribute.

The speaker expresses the want of a trip where “trees and clouds and animals pay no notice” (l. ). Personifying the trees and clouds seems that the speaker is acknowledging that nature is unconcerned with humans and the city due to it being held in such high esteem. It seems that nature looks down upon the city for attempting to mimic or recreate the fresh environment with “labeled elms” (l. 9) and “Public Gardens” (l. 7). The speaker further mocks the city by holding nature in such high esteem and becoming bored by the monotonous society, encouraging nature to “pay no notice” (l. 8). Plath also uses alliteration to mock civilization by calling the tea-roses “tame” (l. 9).

In order to portray the speaker’s attitude in the comparison of nature to civilization, the speaker incorporates symbolism. For example, the speaker states “The pines blot our voices up in their lightest sighs” (l. 24). This is symbolic of how nature is preventing the troubles of society from disturbing nature and all of it’s grandeur. These figurative language devices contribute significantly to the speaker’s attitude. Unlike the figurative language supporting a sardonic tone to society, other devices are found after the tone shift to contribute to the tone of veneration to nature.

The speaker expresses his awe by acknowledging that the country is alive. The speaker says that “night arrives in one gigantic step” (l. 16). Plath applies personification when at the sunset the “colors assert themselves” (l. 14). Once again, this gives nature an independence. The speaker uses alliteration, such as “blank-brained” (l. 27), to reassure the reader that the environment is stress-free. Another example is when the speaker admires the reflection of the stars in a lake by saying “Planets pulse in the lake like bright amoebas” (l. 23).

Coupled with a sound device, the allusion to “Lethe” (l. 6) refers to the mythological river which was sought after for its peaceful forgetfulness. This also symbolizes the comfort and refuge in the calming wilderness that the speaker finds. The uses of these figurative language devices are greatly significant in the speaker’s expression of attitude. In conclusion, Sylvia Plath’s poem “Two Campers in Cloud Country” expresses two contrasting attitudes. Through the use of diction and figurative language, the speaker’s attitudes are clearly portrayed. These devices contributed immensely in making concrete the expression of the two tones. 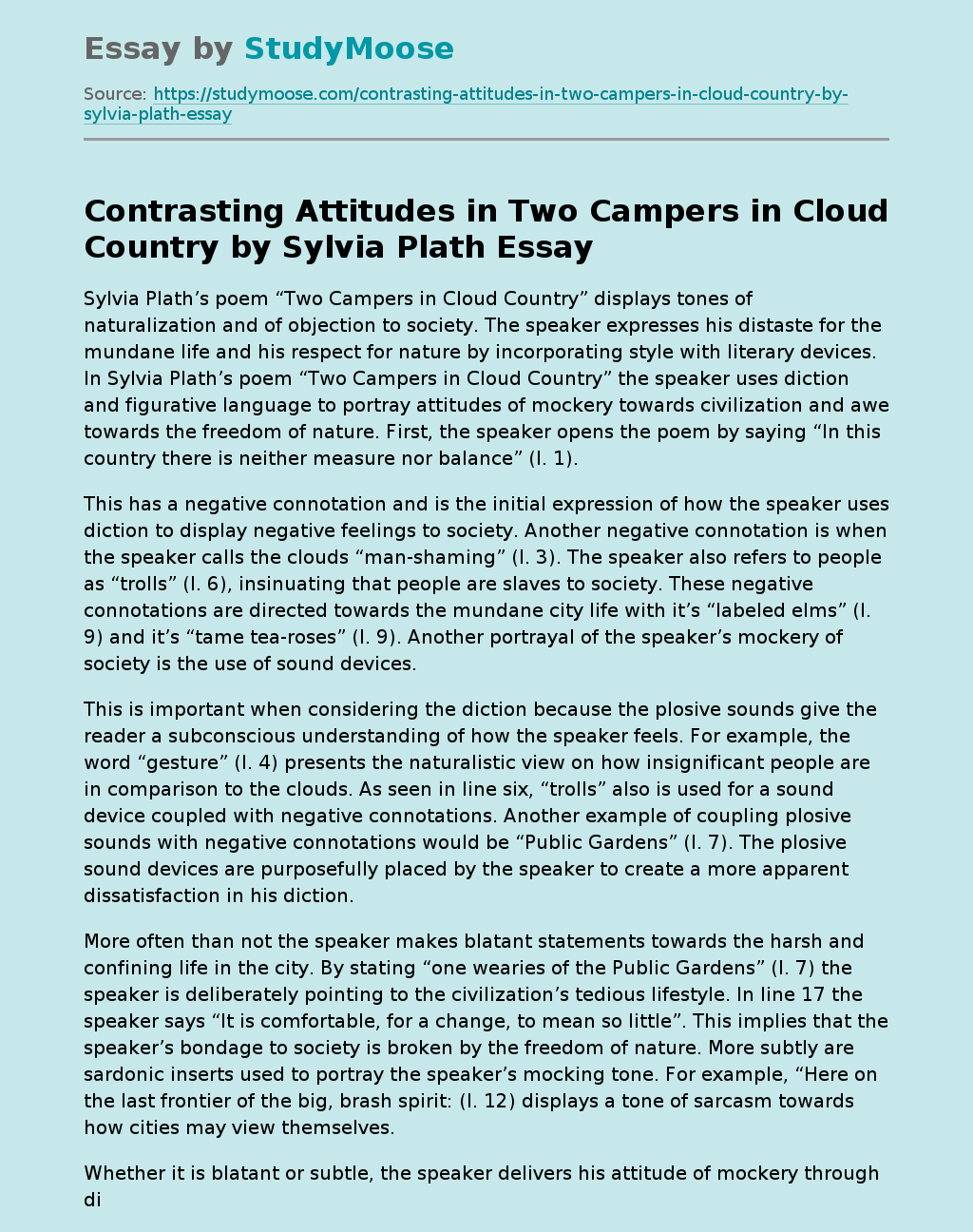